Nestled in the heart of Madrid and connecting two of its main locations, Puerta del Sol and Paseo del Prado, Palacio de las Cortes or Congress of Deputies is the nerve centre of Spanish political life. Indeed, standing between Calle Zorrilla and Carrera de San Jerónimo, it is the seat of national sovereignty. Behind its doors, laws have been debated and passed every day for more than 150 years; and within its walls it has housed the most emblematic episodes of Spain’s parliamentary history. 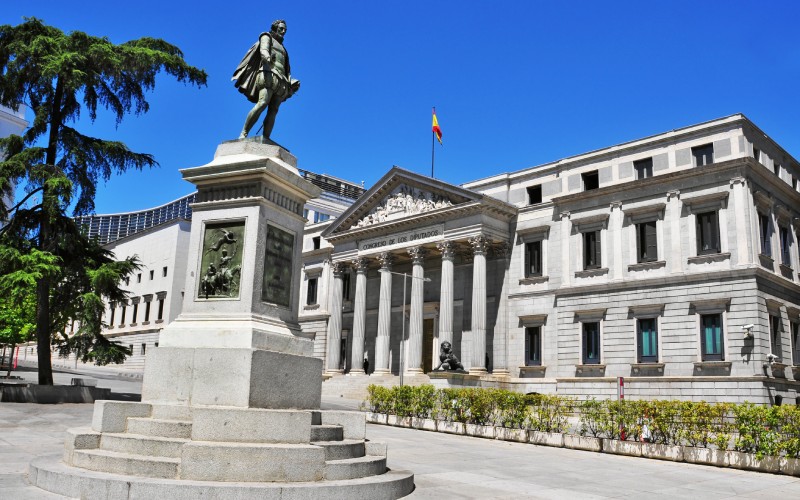 It was Queen Isabella II who inaugurated the Palacio de las Cortes in 1850, seven years after construction began. These were designed under the orders of the architect Narciso Pascual i Colomer; who decided on a neoclassical style that recalled ancient Greece as the cradle of democracy. Today the Congress of Deputies, as well as being the most representative building for its citizens, is one of the main attractions for tourists and locals who stroll through the most central streets of the capital.

Over the years, and as the needs of the Lower House grew, the Palacio de las Cortes has been extended. Today it is made up of seven joint buildings that make up a total surface area of almost 90,000 m2.

A tour of the improvised parliamentary headquarters of the 19th century

Parliamentary sessions did not have a stable location until 1850. In the early days of the constitutional regime in Spain, from the establishment of the Cortes de Cádiz in 1810, there were no buildings suitable for holding parliamentary sessions. Different venues were used for this purpose, such as theatres and churches; as these were the only buildings with sufficient space for the congregation of all the deputies.

This was the case in Cádiz during the French occupation; where the Cortes had two venues: the Teatro Cómico de San Fernando and the Oratorio de San Felipe de Neri. It was in the latter that the Constitution of 1812 was drafted. When the sessions were moved from the Cádiz coast to the capital, they were held in the Teatro Real and in the Convent of El Espíritu Santo; on whose site the current Congress Palace was later built.

A convent turned into a parliamentary seat 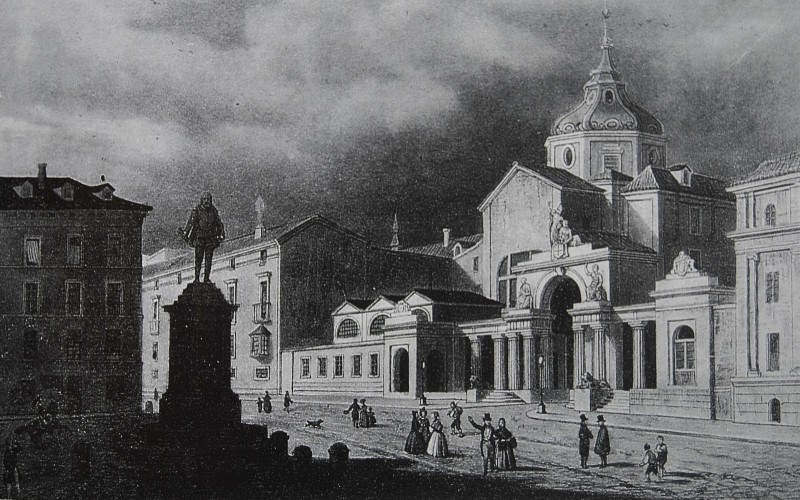 With the arrival of the liberal regime in 1834, the moderate government of Francisco Martínez de la Rosa decided that the meetings would be held provisionally in the church of the Convent of El Espíritu Santo, which had suffered a serious fire in 1823. With the arrival of the Progressives in 1837, they considered that the religious building was not ready to host the Cortes. Apparently, there were still some old rooms in the convent and there were obvious shortcomings to accommodate such an important institution for the State. 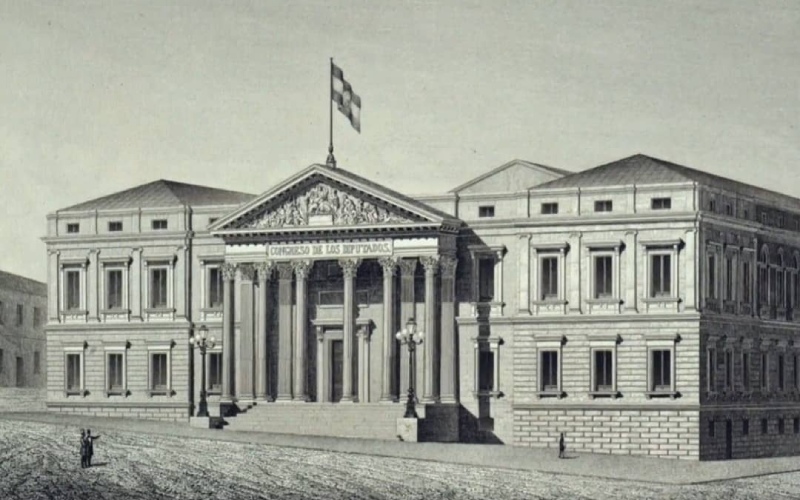 The Palace of Las Cortes in 1850, without the Lions or the current buildings. | Congreso de los Diputados

This site was finally maintained at the express wish of General Espartero, regent of the Kingdom; as it was here that the Constitution of 1837 was approved. To this end, it was decided to demolish the convent and build in its place a new building suitable for parliamentary life. On 10 October 1843, three months after her proclamation as queen and coinciding with her 13th birthday, Isabella II laid the first stone of the new Palacio de las Cortes. During the seven years that the building work lasted in Madrid‘s Carrera de San Jerónimo, the meetings were held in the Ballroom of the Royal Theatre. 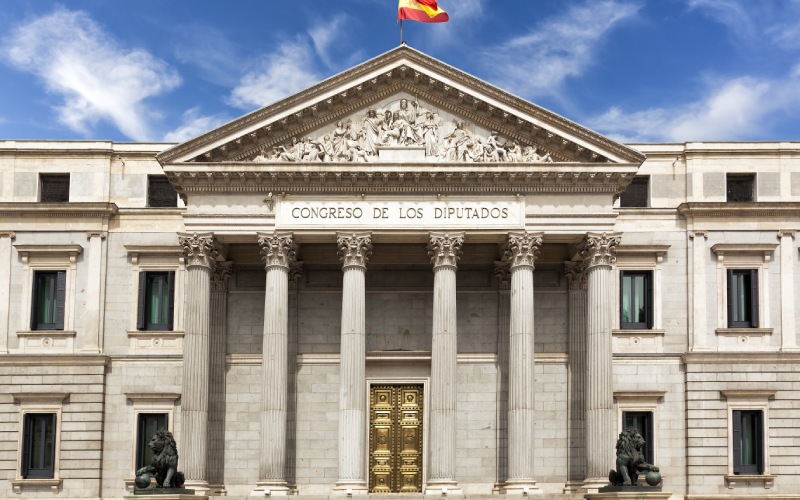 Of the 14 projects submitted, the one by the Valencian architect Narciso Pascual i Colomer was chosen. His architectural work is one of the best examples of 19th-century Spanish Romantic Neoclassicism. Made of granite and limestone from the Sierra Norte de Madrid, its main façade is divided into three sections. The central section contains a wide portico, which is advanced and supported by six classical columns crowned by Corinthian capitals that enhance the majesty of the palace. These impressive pillars serve as the base for a cornice engraved in gold and capital letters: ‘El Congreso de los Diputados’ (The Congress of Deputies). 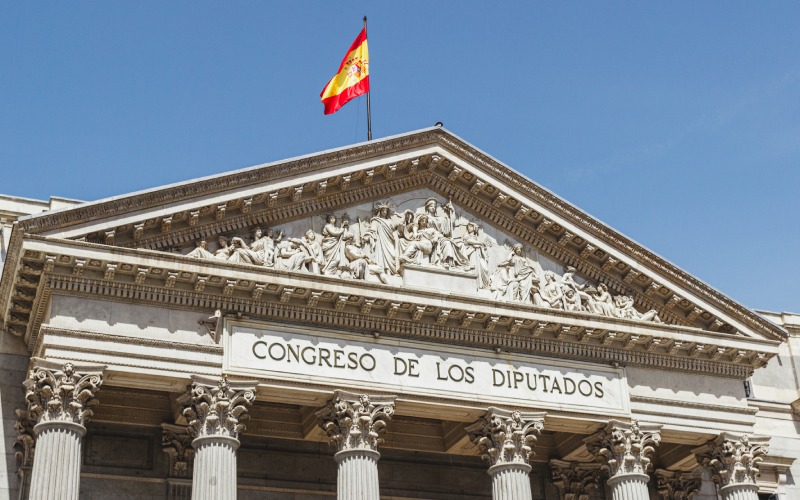 The triangular frontispiece of the Palacio de las Cortes, by Ponciano Ponzano.| Shutterstock

Above the sign stands a triangular frontispiece by the sculptor Ponciano Ponzano. It is made up of round, classically sculpted figures that give allegorical life to the Spanish nation, which is shown embracing the Constitution. Around it are grouped other images representing Fortitude, Justice, Fine Arts, Harmony, Commerce, Agriculture, Rivers and Navigation Channels, Spanish Courage, Science, Abundance and Peace. A representation of Libertas can also be seen, which would serve as inspiration for the statue of liberty in the Pantheon of Illustrious Men, decades before the one in New York. This work has been considered by various experts to be the largest sculptural ensemble of 19th-century Spain. 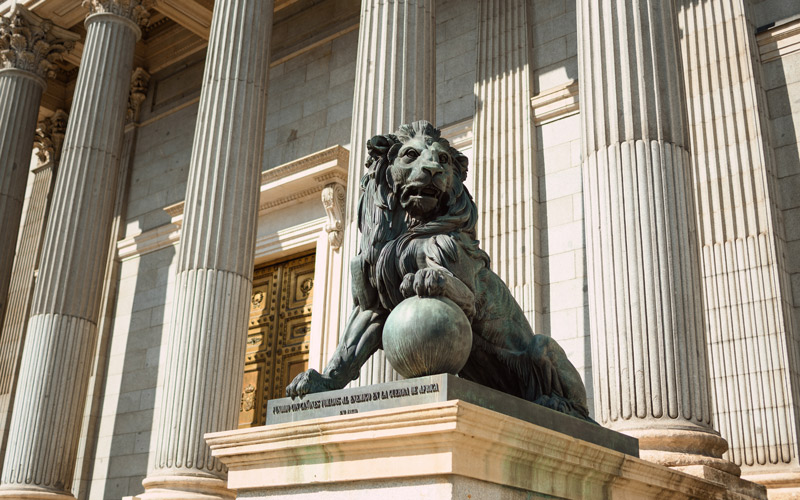 At the foot of the portico and the six columns is a stairway with twelve steps flanked by two bronze lions, also by Ponzano. These two enormous sculptures of fierce and majestic appearance have become synonymous with the city of Madrid, just as the Fuente de Cibeles or the Puerta de Alcalá are today. The placement of the current lions took place years after the inauguration of the Palacio de las Cortes, in 1872, after two failed attempts and a history not without controversy. They soon became known as Daoiz and Velarde, in honour of the heroes of 2 May 1808. Both led one of the most famous fights of the War of Independence.

The lions are responsible for giving their name to the door that occupies the centre of the main façade; the Puerta de los Leones (Lions’ Gate). Its opening is reserved only for the entrance of the Monarchs of Spain when they come to preside over the Solemn Opening of the Cortes. Since 1997 it has also been open to all citizens during the Open Doors Day; which is held every year during the long weekend of the Constitution in December. The usual entrance for Members of Parliament is at the side of the building, on Calle Floridablanca. 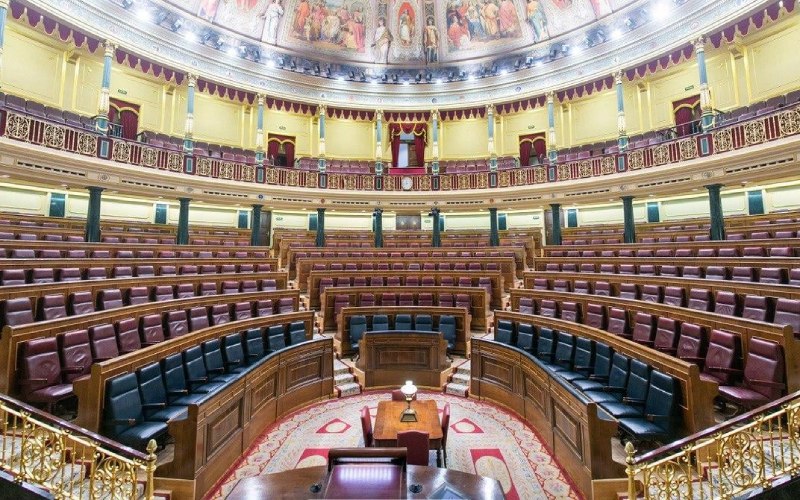 The Salón de Sesiones is the main room in the Palacio de las Cortes; where the 350 deputies meet for plenary sessions. It is also known as El Hemiciclo (the Hemicycle) due to the semi-circular shape of the room; which was the preferred shape in the main parliaments of 19th century continental Europe. This occupies one-seventh of the entire building. It is topped by a curved vault almost 50 metres high. It has a fan-shaped skylight that lets in natural light. The stage is complemented by a pictorial collection of scenes that pay homage to Spanish history. 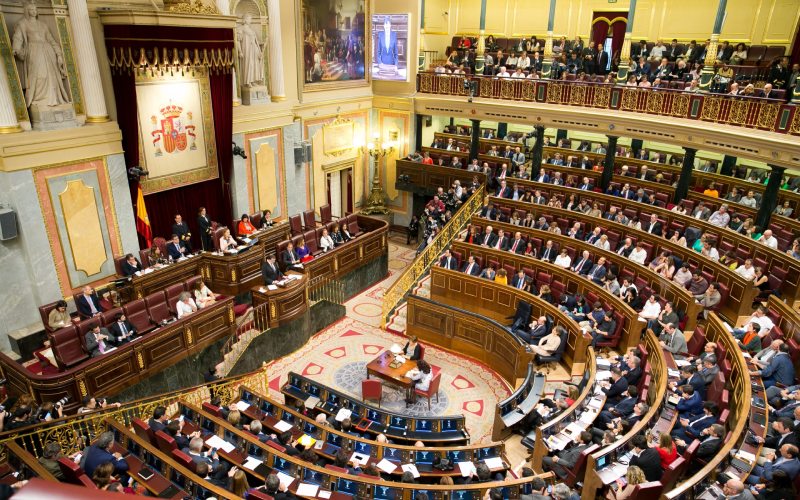 Seats of the deputies and part of the Presidency. | Palacio de las Cortes

This hall is not only the venue for ordinary sessions. It is also the venue for events of special importance, such as the proclamation of the Head of State, the investiture of the Presidents of Government and the opening session of each new Legislature. The deputies who make up the Congress sit in parliamentary groups in the seats that make up the hemicycle. The blue bench is traditionally for the Government. In front of the seats is the Presidency and the Bureau of the Lower House; whose primary function is to govern and organise the work of the entire Congress, being the internal commanding body.

Above the seats and supported by columns are the public gallery. There is the diplomatic tribune of honour, the guests’ tribune and the press tribune. From there, one can imagine the shots fired in the vault and on the walls of the Chamber; during the attempted coup d’état of 23-F in 1981.

A hemicycle converted into a veritable art gallery 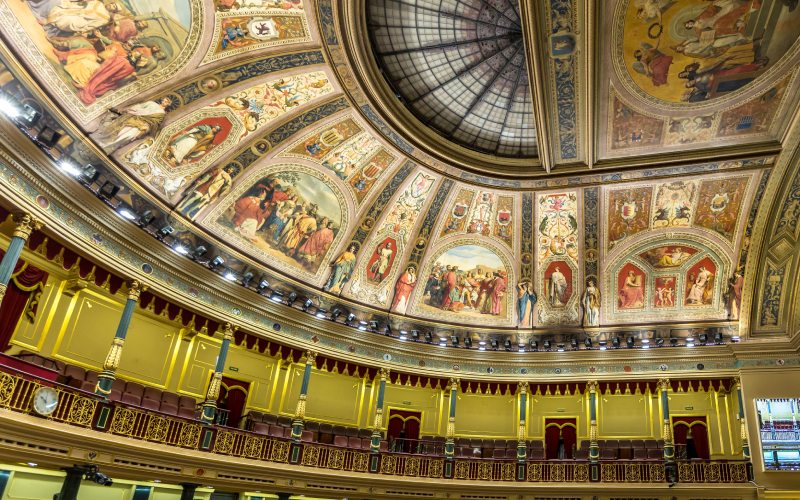 The art gallery that makes up the entire Salón de Sesiones is outstanding. Perhaps the most striking decorative element is the group of paintings that decorate the great vault. The work of Carlos Luis de Rivera is decorated with four historical scenes that narrate the history of Spanish legislation. Thus, it goes from Greco-Roman times, through the Gothic kingdoms and monarchs of medieval and modern times, to Charles III. 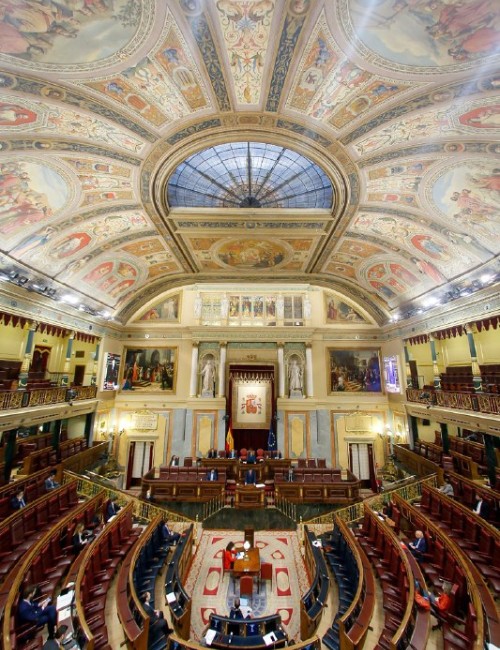 The Hemicycle seen from above. | Palacio de las Cortes

At the top of the dome, in the centre there is a circular painting with the image of Isabella II seated with the allegory of Spain and surrounded by famous figures from the country’s culture and history: El Cid, Christopher Columbus, Miguel de Cervantes, Lope de Vega, among others. On the other hand, and as a small nod to the territorial model, the horseshoe of the vault shows the primitive coats of arms of the cities and provinces with the right to vote in the Courts of the peninsula and overseas.

These are not the only paintings in the Salón de Sesiones. Other equally symbolic works can be seen on the walls of this space, especially on the wall of the Presidency. Its highest part is dominated by four caryatids that mark the polychrome stained-glass window. They represent Justice, Prudence, Fortitude and Temperance. 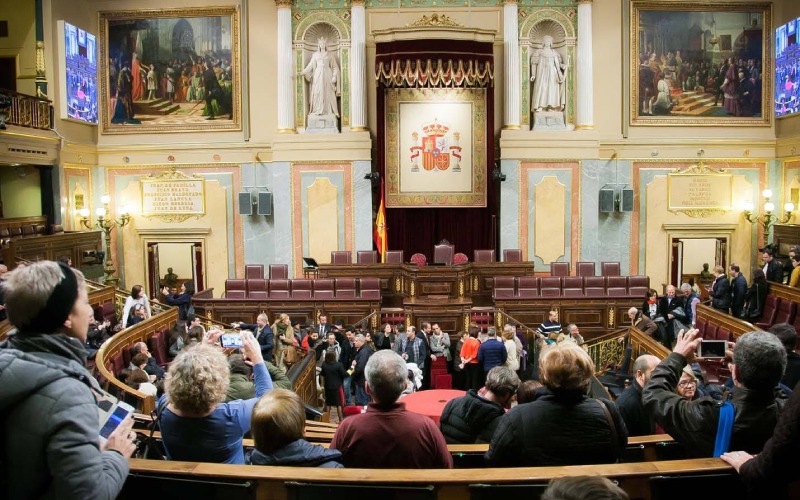 Immediately below white marble statues of the Catholic Monarchs frame the tapestry of the Spanish coat of arms. On either side of the wall, two large paintings depict a historical passage from the medieval the modern Cortes. On the left is the work “María de Molina”; in which she presents her son Ferdinand IV at the Cortes of Valladolid in 1295. Meanwhile, the one on the right depicts the Cortes of Cadiz. This painting reflects the plenary session in which the deputies took the oath of office in 1810.

art, Community of Madrid, history, Madrid, palaces, provincial capital
It may interest you...