Madrid is full of statues that watch from above, many of them on the rooftops or parks of the city and others with a close relationship with the mythological. The capital is home to many hidden corners and amazing stories that go unnoticed behind the beauty of the statues. So much so, that it is said that the Spanish capital is the only city in the world with a monument dedicated to the Devil. This is the case of the statue of the Fallen Angel of El Retiro, located 666 meters high and with a great artistic and historical value that many are unaware of. 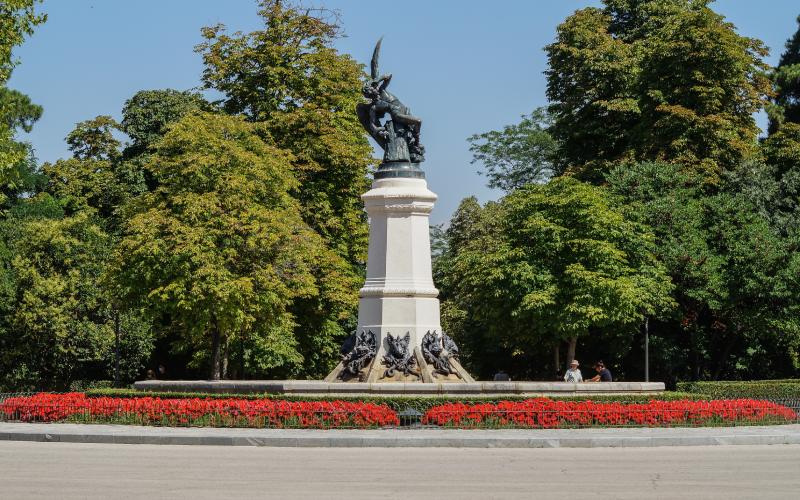 Fountain of the Fallen Angel in Madrid. | Shutterstock

Why does the devil have a statue in Madrid?

No one would think that walking through the Retiro Park could recognize Satan himself. In fact, it is not usual for cities to dedicate a monument to this one, but Madrid boasts of being the only capital in the world with this title. Walking through the Retiro it is possible to contemplate Lucifer, in the statue of the Fallen Angel, the work of Ricardo Bellver in plaster. This won the First Class Medal at the National Exhibition of Fine Arts in Madrid. 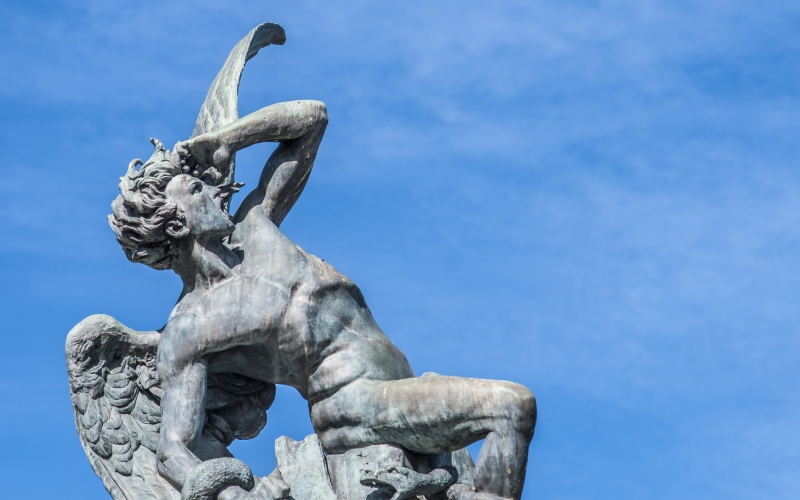 The artist was inspired by Milton’s Paradise Lost to recreate the moment when Lucifer is punished by God by being cast into hell after having been his favorite angel. The work was acquired by the State for 4,500 pesetas thanks to its originality and great artistic value, being sent to the Universal Exhibition in Paris to make it in bronze. On its return to Spain it was given to the Madrid City Council.

Benito Soriano, director of the National Museum, where it was exhibited for months. He suggested that it be exhibited in a public place because, in his words, for its daring composition and original attitude. Officially inaugurated in 1885, since then it has been located in the Retiro Park and this is the reason why Madrid has a statue of the devil.

The Fallen Angel, a trunk and a snake at 666 meters high

The statue has a great artistic value, not only for its materials, but also for its well-defined features, the unusual face and all its details. A work wrapped in symbolism. The body of the beautiful angel is leaning on a trunk and is being surrounded by a seven-headed serpent. Such an animal refers to the devil, since it is the form he takes after his expulsion from heaven to tempt humans. He is represented as Lucifer, but seconds after this biblical scene, he will become Satan. His expression is not usual in a sculpture, it shows a gesture of pain and humiliation. 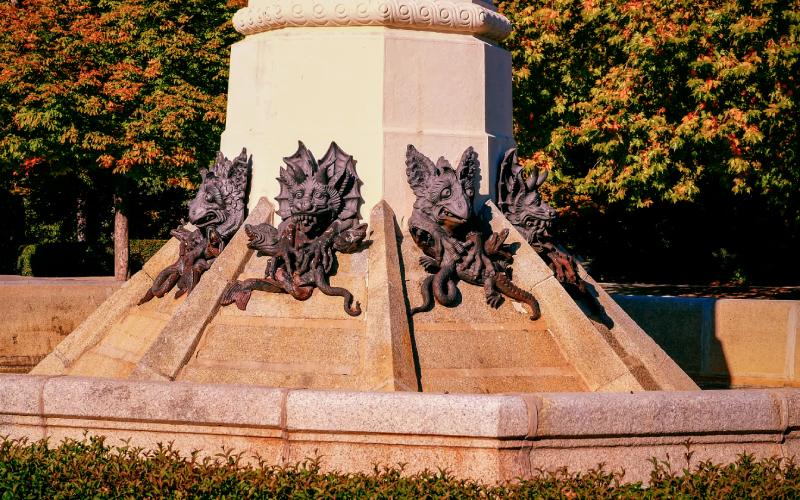 The pedestal was commissioned to the architect Francisco Jareño, who followed the peculiar mythology of the statue. Thus, he designed an octagonal structure with fish-spitting demons, lizards and snakes. Such was the impact on society during the last century that a police presence was needed so that the fountain would be permanently guarded. Not surprisingly, it became a meeting place for satanic and occult groups. 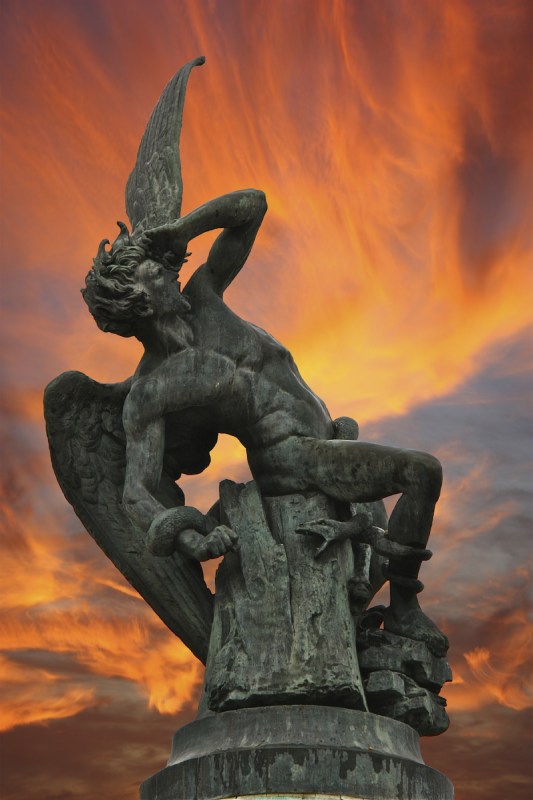 In fact, its strong symbolism has caused many to consider it as a gateway to hell. Added to this is the fact that it is located 666 meters above sea level, which gives a plus of mystery to the work. It should be noted that a few meters from the statue, is located the Observatory of Madrid in which there is a plaque indicating that the building is 656’8 meters above sea level. Therefore, this may be the real reason for the curious height of the statue.

Immobile for more than 135 years in the Retiro Park

The sculpture is located in one of the fountains of the Retiro, where the Avenida de Fernán Núñez and the Paseo de la República de Cuba and Paseo de Uruguay meet. It is a very busy area. As a curiosity, there is a replica of the Fallen Angel in the lobby of the Museum of the Royal Academy of Fine Arts, where the artist Ricardo Bellver studied. 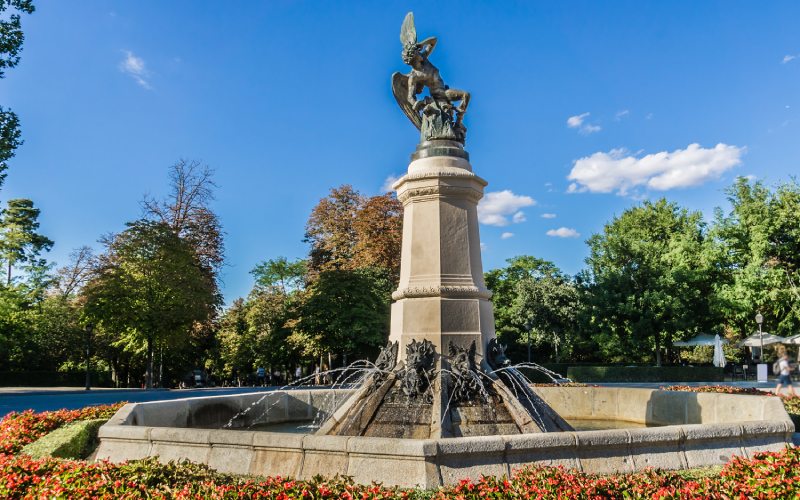 Getting to it is very easy, as there are connections to the park from many areas of the city. The Metro line L1, the suburban Madrid-Atocha or several bus lines. The schedule to visit it is every day from six in the morning to eleven at night. Thanks to the fact that it closes its doors at night, the satanic concentrations around it have been decreasing, although there are some sporadic situations.

The visit to this place is one of the best outdoor plans in Madrid, even part of a route through the fountains of Madrid. An original way to do it is to rent a bike to tour the most curious fountains of the capital, to end the day enjoying one of the most emblematic sunsets in the Retiro Park.

Community of Madrid, gardens, Madrid, parks and gardens, statues
It may interest you...