The island of La Palma is one of those Canarian loves at first sight that always occupy a privileged place in the heart of the lover. Its green landscapes mix with rocky terrains typical of another planet that hypnotizes the visitor. And at the exact point where the most impressive color palette of nature converges, imposing craters rise up to the sky and become eternal watchmen.

When a hiking and adventure lover learns that there is a chance to explore these craters on a route that literally runs between volcanoes, two things are likely to happen. First, an urge to travel to the Canary Islands, specifically to the island of La Palma. Secondly, you will manage to find the most precise way not to miss a single detail along the route. The following lines on the Volcano Route try, at least, to fulfill the last premise.

Brief history of the southern area of La Palma

Before closing the backpack and setting out on the road, it is interesting to dwell on the volcanic history of La Palma. The truth is that the volcanoes that have been most active over the years are located in the southern part of the island. Specifically in the Cumbre Vieja natural park, the scenery that integrates this route. 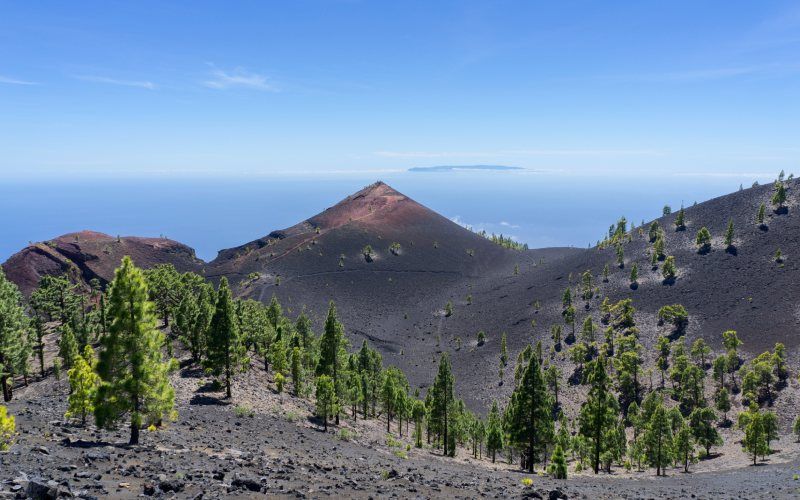 One of the great curiosities of the geology of this area of La Palma is that it was formed only 500 years ago. In fact, a series of eruptions that took place at the end of the 16th century finished sculpting what today is one of the great attractions of the Canary Islands. The last one was carried out by Teneguía in 1971 and lasted from October 26 to November 18 of that same year. Not to mention the underwater volcanoes that lie more than 4,000 meters below the dark depths of the Atlantic.

At the heart of the Volcano Route

Rarely does one have the good fortune to be introduced to such wild scenery as that of the Volcano Route. This route covers five giants of lava spread over breathtaking lunar landscapes. The best part? That this route allows you to discover the rich natural variety enjoyed by the island of La Palma. A land of contrasts that, oddly enough, remain on the same landscape. 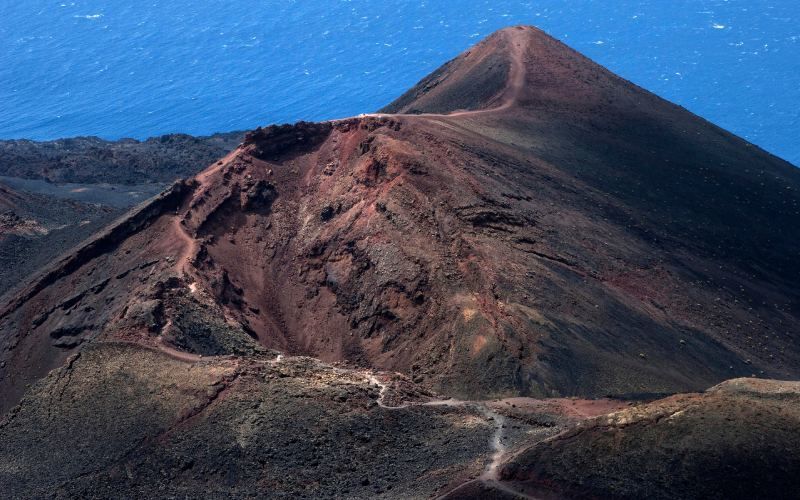 This route can be done in several ways, although the most recommended is the following. From the Refugio de El Pilar to the lighthouse of Fuencaliente. In total, about 24 kilometers that begin with a climb of medium intensity known as cuesta de las Deseadas to continue in a comfortable gradual descent that leads to the lighthouse. The scenery is completed by beautiful salt marshes. The ideal is to do the section in two days with a stop in the picturesque village of Los Canarios. A perfect place to recharge your batteries and get to know a little bit of that cheerful and catchy Canarian character. 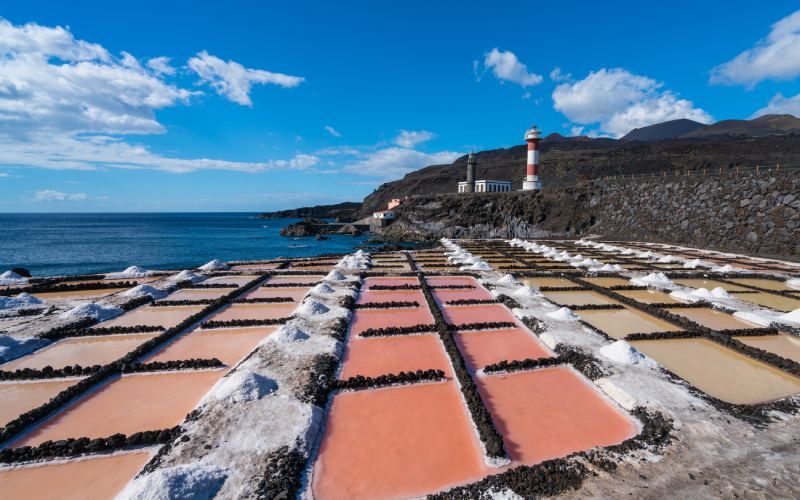 The route goes through the imposing Hoyo Negro crater and the Duraznero volcano, the result of the activity of another volcano that is located within the limits of the park. The beginning of the route is marked by canary pine forests that, little by little, begin to turn into arid terrain formed by black sand, solidified lava and the beautiful views of the El Paso valley. The views of these two craters combine with the beautiful landscape of the gorge, the ocean and the clouds that roam freely among the highest peaks. Below are the imposing volcanoes Martín, San Antonio and the aforementioned Teneguía.

The Canary Island pine, a phoenix rising from the ashes

According to some legends of the area, the ancient Guanche civilizations used to gather in this part of the Isla Bonita to make offerings to these volcanoes, asking them not to erupt. According to their beliefs, in these violent mountains were hidden demons and beings of darkness that wanted to destroy their villages. As if that were not enough, they also wanted to deprive them of crops and livestock. In this way, the offerings ensured an uneventful season of peace. 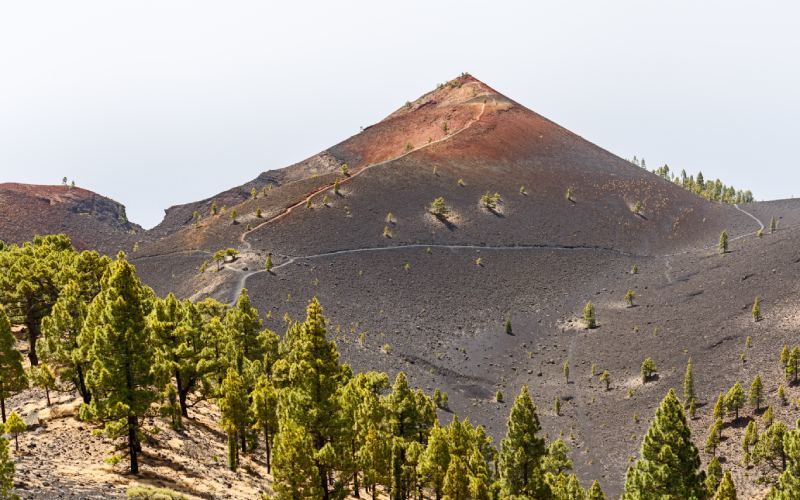 Another of the curiosities of the Canary flora are its Canary pine forests. Considered the official symbol of the island of La Palma, its extraordinary quality lies in the fact that it is resistant to fire. An ideal property for the high temperatures that sometimes hit the island and for the volcanic character of the island. Many biologists compare them to the mythological phoenix, since it is the only species capable of being reborn from its ashes in case of fire.

As mentioned above, the best way to enjoy a complete experience on the Volcano Route is to stop in Los Canarios. A picturesque village located in the middle of the route that becomes the delight of hikers. Not only for the rich gastronomy offered by its squares and traditional bars, but also for the peaceful atmosphere. Its star products? The salt from its salt mines and the exquisite wines from the extensive vineyards that surround the town. 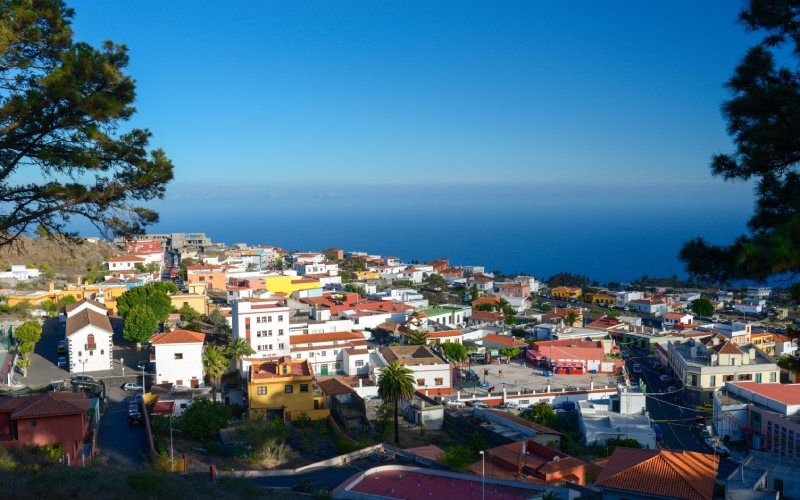 In the area there are very good places to taste the most typical Canarian specialties. Papas arrugadas (wrinkled potatoes), cuttlefish, local fish and local wines are among the favorite products. The options are diverse and you can choose to eat either in a restaurant surrounded by vineyards or in front of a viewpoint overlooking the ocean.

Tips for the Volcano Route

Every route requires its own technique, and this one was not going to be less. Although most of the terrain is kind to the knees, the truth is that this trip requires some physical preparation. It is demanding because of the length of the descent once the Deseadas slope has been climbed. If you spend the night in Los Canarios, the route becomes more accessible for those less initiated in hiking. It is recommended to equip yourself with plenty of water, dried fruits and some food high in glucose such as dates.