The Vera Cruz Church is one of the most visited religious monuments in Segovia, not only for its impressive architecture, but also for the stories that surround it. It is located in the neighborhood of San Marcos, on the road to Zamarramala. A small town 5 kilometers from the capital, which belongs to the municipality of Segovia since the 1970s.

Just as its administrative location was discussed, its construction is also a hotly debated topic. But this is not the only controversial issue about this religious building. Perhaps, whoever gets close enough, can listen to the secrets cast in the mortar of its stones. Words that tell stories about when it was built, why and, above all, who built it… The mystery has been going on since the beginning of the 13th century and still no agreement has been reached. Today, those voices still resound.

A place marked by history

Reaching the Church of the Vera Cruz in Segovia leaves no one indifferent. Just its location, by itself, is surprising for many, outside the city limits. It is a very special place, not only because of its location outside the city walls. But also because the church stands on a rocky slope full of tombs that have been carved into the stone.

Its foundation dates back to the beginning of the 13th century, although there is still no agreement on its authorship. Even today it is still debated whether its fathers were the Knights of the Order of the Holy Sepulchre or the Knights of the Order of the Temple. One more example, like so many in history, of the difficulty of distinguishing between legend and reality, reality and legend.

But the Church of the Vera Cruz is not affected by this debate. Standing on its stony slope, it remains unperturbed by the passing of the centuries, and now by the coming and going of the cars that, like so many days and nights, come and go. 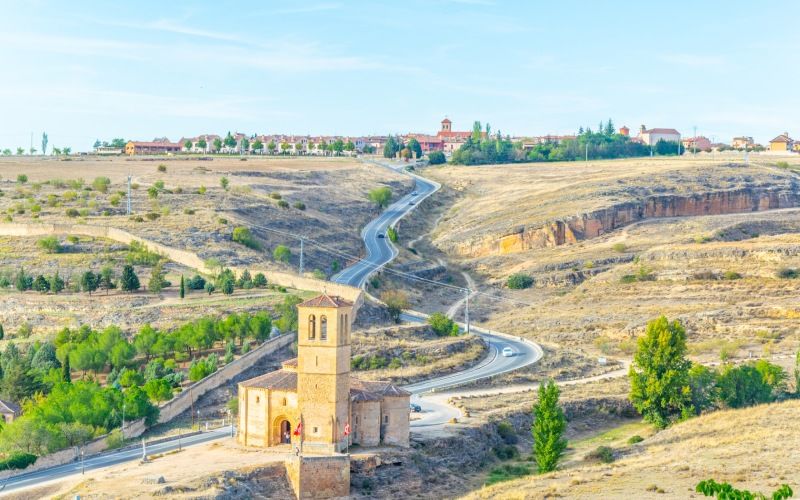 Plan of the Church of Vera Cruz by the roadside. | Shutterstock

The year 1216 was a milestone in the short history of the temple. Pope Honorius III granted it as a relic a piece of the Cross of Christ. Now, this witness of the Lignum Crucis is kept in the new parish church of Zamarramala, leaving empty the reliquary altarpiece where it rested for more than four centuries.

At first the Church of the Vera Cruz was the parish church of Zamarramala, until the end of the XVII century, when a new parish seat was built, with the name of Church of Santa María Magdalena. In the year 1692 the Vera Cruz was placed under the tutelage of the Virgin of Peace, which, molded in stone in one of the apses, has been and is an exceptional witness of history. Despite the change of ownership and name, it continued to be recognized as the Church of Vera Cruz, as it is today.

The disentailment meant a change in the destiny of the Vera Cruz church, and it was even used as a hayloft. The year 1919 saw its rebirth as a place of worship and it was declared a National Monument by a Royal Order of the same year. But it was not until after the Civil War when the restoration of the building was undertaken, between 1946 and 1949 by Francisco Javier Cabello Dodero. And in the 1950s, the Ministry of National Education ceded the church to the Order of Malta, officially taking possession of it in May 1951.

A tour of its architecture

The Church of the Vera Cruz, built in masonry, is a temple of Romanesque style, with a centralized body made of carved stone, as are the columns, arches and openings. It has twelve sides and two bodies, in the image of the Church of the Holy Sepulchre in Jerusalem. A similarity that earned it to be recognized with the same name.

The central part, a pyramidal roof, houses a lantern. The east-facing chevet originally had a triple apse, to which a fourth was added to house the sacristy. All these are characteristics assimilated to the ancient Roman baptisteries of the early Christian era, imitated later in the construction of Crusader Order temples. In the same way they are identified in Torres del Río, Navarra. 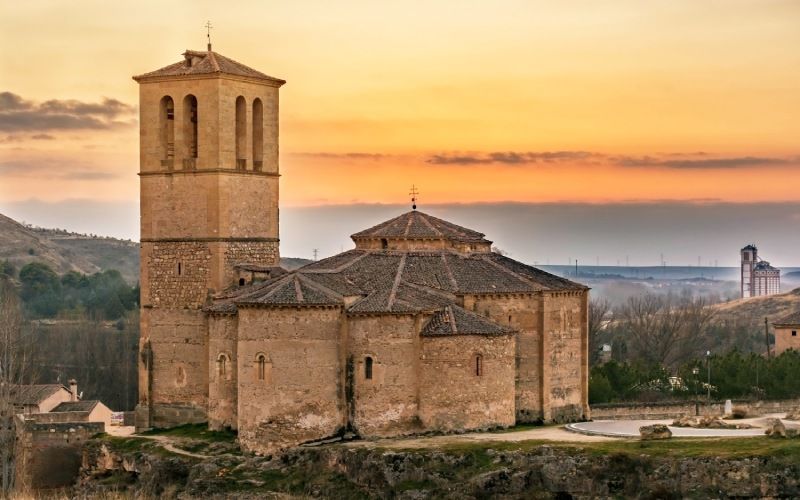 Full view of the church under the evening sky. | Shutterstock

The interior is illuminated by natural light through small windows that open in the masonry wall. An ambulatory divided into twelve sections surrounds the edicule, or central body, forming different vaulted spaces. On this central space, chiseled in the arch, a foundational inscription welcomes the visitor.

The main doorway is formed by a horseshoe arch, with three archivolts with zigzag decorations, supported on three columns with representations in their capitals. In them, in addition to vegetal motifs, David and Goliath, together with a lion, entertain themselves contemplating the landscape. And on the other side, the Holy Trinity coexists with a group of demons in charge of binding a sinner. But what really fuels the legend of its construction is the cross located in the center, the same as that of the Holy Relic of the True Cross. In addition to two Maltese crosses, in the spandrels. 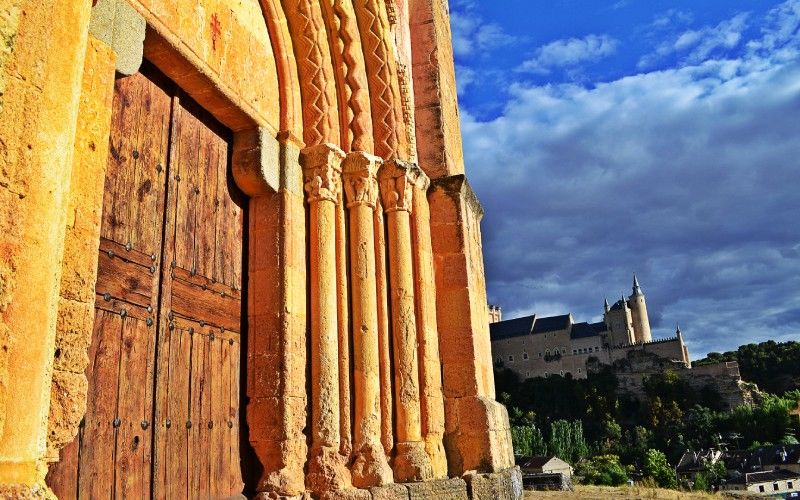 Detail of the main doorway of the Vera Cruz Church. | Shutterstock

The access door is simpler, but it is worth looking closely to see a rather deteriorated relief. In it, the three Marys visit the empty tomb of Jesus, on which an angel rests. To the right of this door is the tower, at the base of which is the chapel of the Lignum Crucis. Inside, the limestone altarpiece, now empty, decorated with the crown of thorns, is the first thing that catches the eye. But the Church of the Vera Cruz stands out for much more, among other temples of Romanesque style.

Soon after arriving, your visit, both inside and outside, becomes a kind of Ariadne’s thread to follow. Without letting go of this thread, the tour reaches centuries of history, frescoes and inscriptions of orders. There are even declarations from visitors, captivated by the beauty that radiates from the church. According to Emilio Castelar, during his tour in the 19th century ‘…it is one of the works that its contemplation most imposes on the intellect…’. Something that, undoubtedly, no visitor will dare to dispute.

The Church of the Vera Cruz and its legendary atmosphere 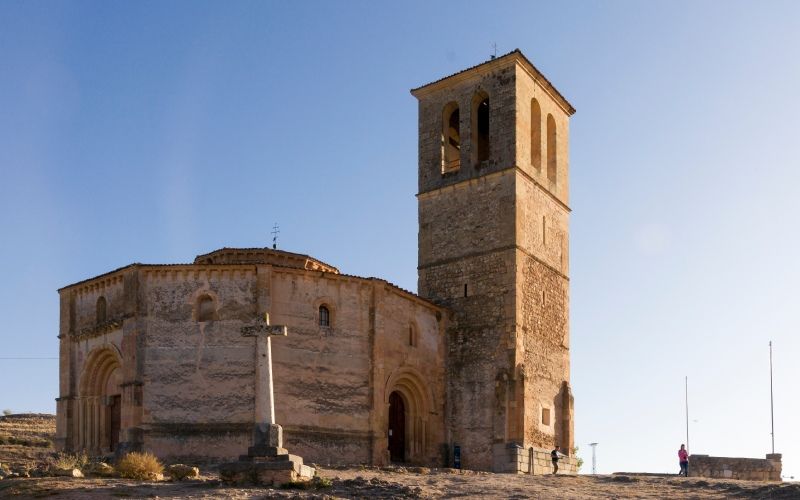 Image of the cross in front of the façade of the church. | Shutterstock

Some historians grant to the Knights of the Order of the Temple the authorship of the Church of the Vera Cruz looking for its resemblance to the Dome of the Rock, in the Holy Land. But the legend of the Templar foundation is not only fed by its architectural resemblance to the buildings of this order. Nor the document of Pope Honorius III in which it is indicated that a relic of the True Cross is sent to the Templar Order. The Templar legend of the Church of the True Cross, known for a long time as the Church of the Holy Sepulcher, transcends architecture and papal missives.

It is necessary to immerse oneself in the stories that, in the voice of the local people, are interwoven with the official history. It is this oral tradition that places the death of a Templar knight in the year 1162, and the transfer of his body to the walls of the building. It seems that, during the night, the knight who was watching over the body fell asleep, a moment that the rooks took advantage of to enter the church and destroy the body. After a while, the watchman woke up and, horrified, frightened the birds away, cursing them and forbidding them to enter that holy place again. It is said that, since that moment, no more rooks have been seen approaching the stones of the Vera Cruz. Only swallows watch over the temple.

Another legend locates in the subway part of the church imposing Templar treasures. Great riches that were buried there by knights whose corpses still guard them today. Keeping on guard and ready to paralyze with withering lightning anyone who dares to move even a single one of the stones.

These stories inevitably accompany the visit. The tour of the Church of the Vera Cruz is carried out holding a misty hand that guides you. A fog of mystery and energy that is already perceived in the vicinity of the place. The light shades of unanswered questions, secret rooms and the number twelve that envelops everything, leaving a glimpse of the deep imprint of its symbolism. Twelve apostles, twelve zodiacal signs, twelve tribes of Israel, twelve gates of Jerusalem, twelve months of the year and the twelve sides of the Church of the Vera Cruz in Segovia. 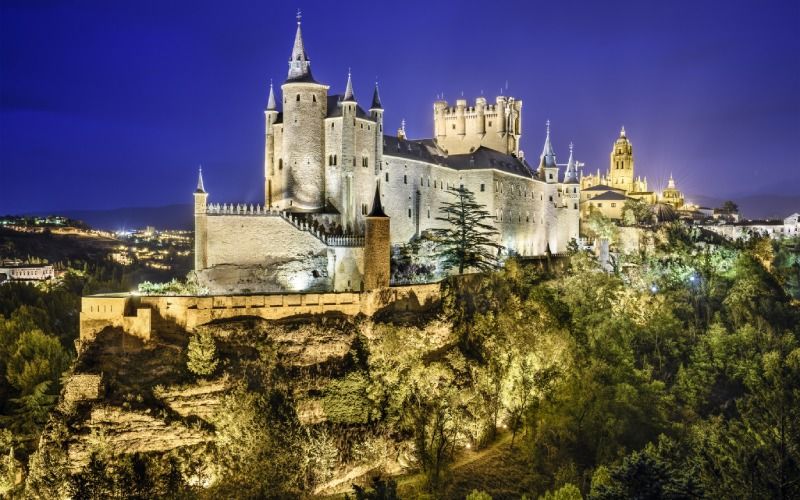 Panoramic view of the Alcazar of Segovia, illuminated at night | Shutterstock

The mystery is served and accompanies the traveler on his return. It is difficult to shake off the dust of its history, even if you visit the Alcazar or go as far as Madrid or Avila. Not even relaxing in the area, discovering the Granja de San Ildefonso or the beautiful villages that are hidden there, it is easy to abstract. A visit to the Vera Cruz Church will always remain in the memory.

Castile and León, churches, history, Segovia
It may interest you...