In the city of Madrid lived in the year 2020 more than three million inhabitants. Three million people in an area of just under 605,000 hectares. Crazy. In fact, this number makes half of the inhabitants of the Community of Madrid. In other words, half of the population is concentrated in the city, while the other half is spread over a much larger area. However, although this may seem a lot, it is nothing compared to all the corpses resting in the Almudena cemetery. There, the concentration is much higher. In 120 hectares are distributed well over five million bodies. It is safe to say that in the municipality there are more dead than alive. 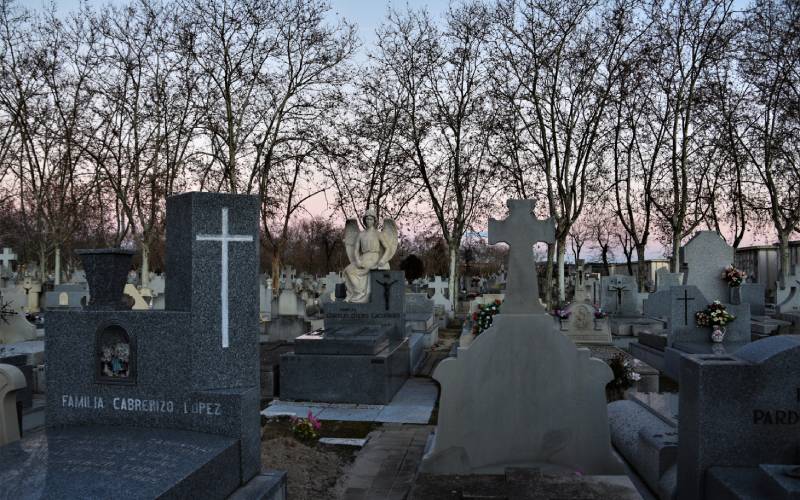 Sunset in the Almudena Cemetery | EG

The origin: a cemetery for the victims of cholera

The largest necropolis in Spain, one of the largest in Western Europe, was officially inaugurated in 1905. But in reality, the city of the dead had already been in operation for some time. The project of the so-called Necropolis of the East was conceived much earlier. Already in the reign of Charles III, in the 18th century, there had been talk of moving the cemeteries to the outskirts of the cities. It was not until the regency of Joseph Bonaparte, at the beginning of the 19th century, that the first cemeteries outside the city walls began to be built. 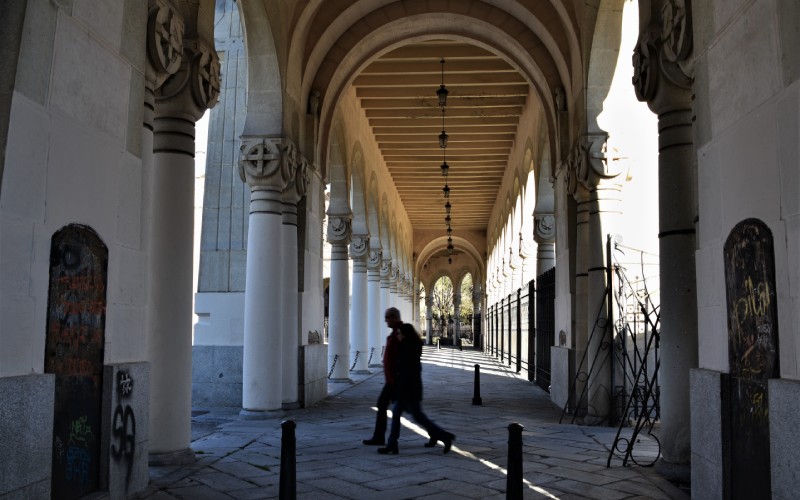 Entrance to the Almudena | EG

In 1876, at last, the plan for what would later be known as the Almudena cemetery was begun. It was located in the eastern part of the city and the neighborhood of Vicálvaro, today known as La Elipa, was chosen for its construction. The architects Fernando Arbós y Tremanti and José Urioste y Velada were the ones who took the reins of the design.

Eight years later a cholera epidemic broke out in Madrid. Meanwhile, the great necropolis was still under construction. It was immediately decided to build a provisional cemetery. This cemetery was baptized as ‘an epidemics cemetery’ and received the name of Nuestra Señora de la Almudena cemetery. Later, that small cemetery would become part of the Necropolis of the East and would end up imposing its name to the place.

As soon as the visitor enters through the main door of the Almudena, he is greeted by a baleful creature. It is known as Faust or exterminating angel. This small sculpture can be seen at the top of the chapel that can be seen as soon as one crosses the portico. Both structures, portico and chapel, were designed by the architect Fernando García Nava, who in 1905 was in charge of the works of the necropolis. 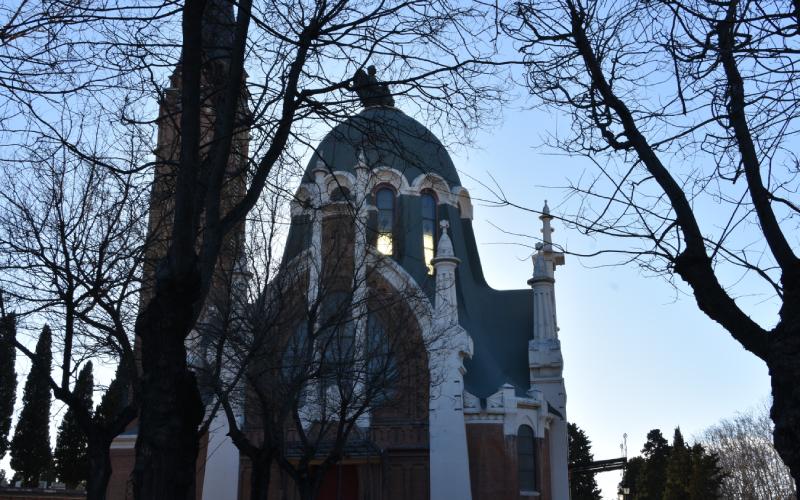 Chapel of the Almudena cemetery. At its peak, Faust. | EG

But, continuing with Faust, there are two terrifying legends about this angel. The first one is the one that says that if someone hears a trumpet sound, it means, nothing more and nothing less, that the death is coming, either to him or to someone close to him.

The other legend is still, and it was difficult, more sinister. According to this version, on the day when the Apocalypse comes to the world Faust will rise, blow his trumpet and the dead will rise. It is said that, for this reason, Faust’s trumpet, which at first was in his mouth, came to be placed in his hands after a restoration.

A tour of the most illustrious tombs of the Almudena Cemetery

Throughout this huge cemetery, a city where there are even buses, you can see many curious corners. Imposing mausoleums, tributes, beautiful sculptures… One of the greatest peculiarities lies in the tombs of certain personalities of Spanish culture. Tombs that are accompanied by a certain historical halo and, sometimes, artistic touches.

The characters that can be visited in the Almudena are many. For example, very close to Fausto is the mausoleum dedicated to the Flores family. There rest the bodies of the singer Lola Flores, her husband Antonio Gonzalez and her famous son Antonio Flores. Next to the tomb, two statues. Lola Flores dances to the sound of a song played by her son. 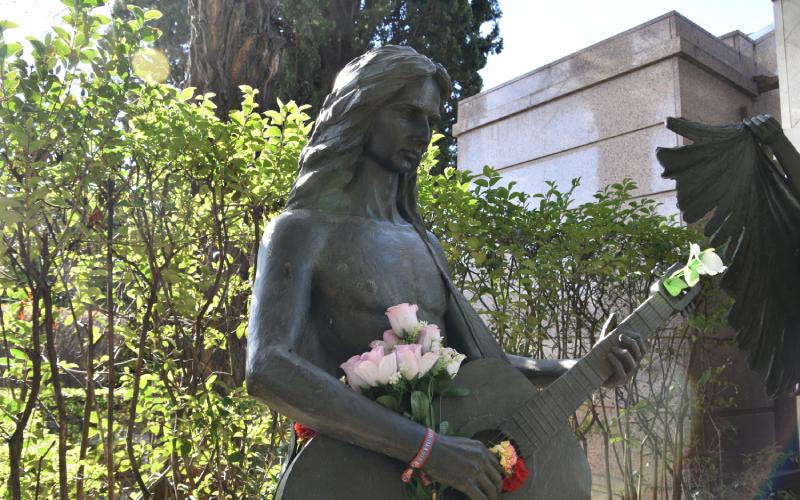 The origin of the cemetery: a cemetery for cholera victims

Far from the tomb of the Flores family, when walking along the paths of the necropolis, the visitor may come across a huge sculpture that stands out from all the others. A man stands in front of two horses, just in front of an arch that reads: ‘Circo Mundial’ (World Circus). This is the tomb of José María González, known as Junior, the former director of the Great World Circus. 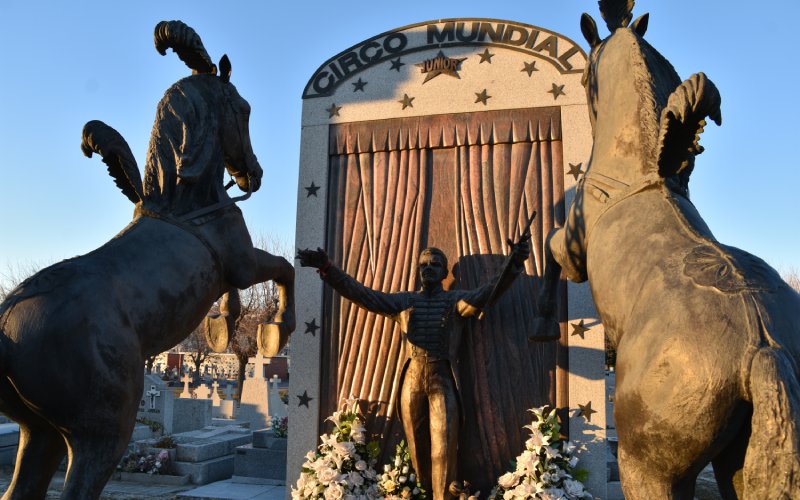 Sculpture next to the tomb of Junior, director of the Gran Circo Mundial | EG

The list goes on and, among niches and visibly abandoned tombs, there are the graves of former mayors of Madrid, such as those of Tierno Galván and Alberto Aguilera. The remains of Pio Baroja, Ramón y Cajal, Estrellita Castro, Benito Pérez Galdós, Dámaso Alonso or Enrique Urquijo will also rest eternally in the Almudena cemetery.

The firing squads in the walls of the Almudena Cemetery

Although art and legends also make their way through the paths of the Necropolis of the East, the main component of this space is obviously none other than tragedy. Apart from the millions of people who have ended their lives under this earth, the Almudena was the scene of awful events: the executions that took place before and after the Civil War.

At first, it was the sympathizers, military and civilian, of the rebel side who perished shot by their Republican compatriots. Later, once Franco was victorious, it was the followers of Franco’s regime who executed thousands of people on these walls. It is estimated that more than 2,500 prisoners perished within the walls of the cemetery during Franco’s regime. Vestiges of those events can still be seen on the walls of the Almudena. 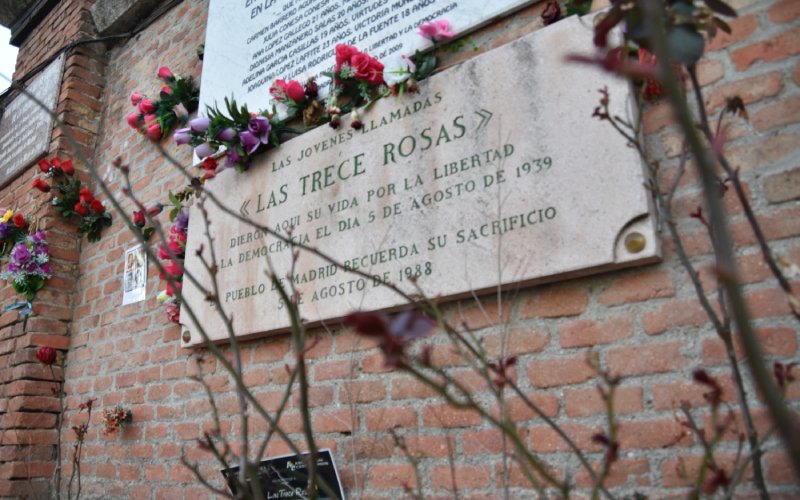 Thus, entering from the portico of O’Donnell, you can see, for example, the monument dedicated to the Thirteen Roses, thirteen young women shot shortly after the end of the war. A plaque commemorates those women, on a wall where bullet holes can still be seen.

Closer to the main portico there is also a monument, this time dedicated to the soldiers of the Blue Division, a volunteer corps that participated in World War II against the USSR forces. Somewhere in the cemetery, also, you can find a memorial to the Condor Legion, the Nazi aviation unit that harassed the town of Guernica, among other places, in the Civil War. The Almudena Cemetery is, in short, a place where some wounds still hurt. 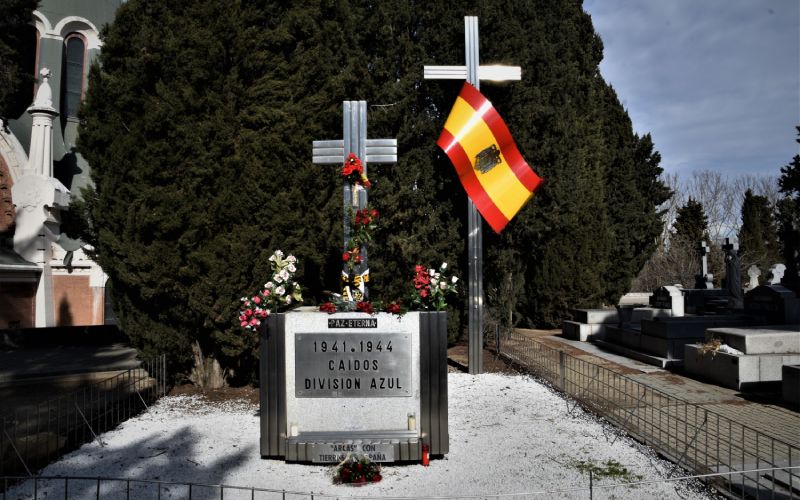 Tribute to the fallen of the Blue Division | EG

This article could not end without mentioning the civil cemetery. This part of the cemetery is located just in front of the Catholic cemetery, across Daroca Avenue. Significantly smaller than the East Necropolis, the civil cemetery houses a great string of political celebrities. The founder of the Spanish Socialist Workers Party (PSOE), Pablo Iglesias, Dolores Ibárruri Gómez (known as La Pasionaria), Francisco Pi y Margall or Largo Caballero are some of the bodies that can be found here. 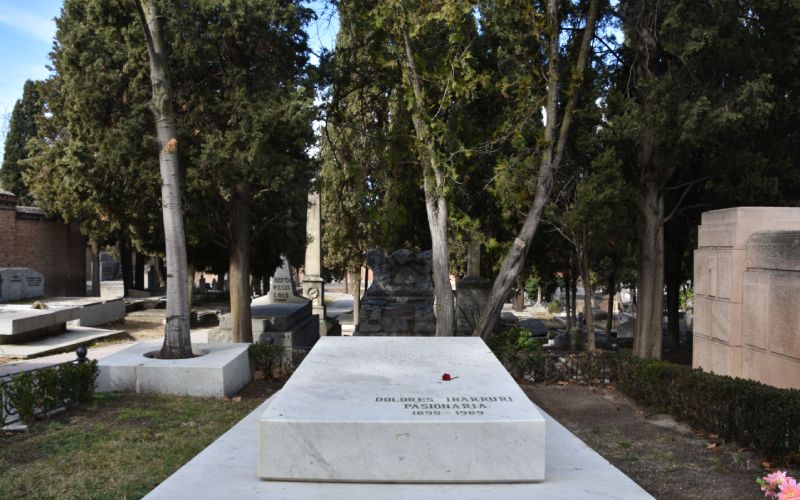 Towards the back, as one moves further away from the entrance, one can see some tombs on which flowers are not dried, because there are none. Instead, immortal stones await the passage of time and accompany the deceased. This is the Hebrew cemetery, which coexists with the civil cemetery, and where the flowers are replaced by songs, as is their tradition.

art, cemeteries, Community of Madrid, history, Madrid
It may interest you...