The city of Frías is of historical value due to its relation to the most powerful family in Castile. It is a gorgeous town with a castle crowned by a peculiar rock, interesting monuments, and celebrations that explain its epic past.

Plan your visit to Frías

The tour of the castle and the other places to see in Frías can be done in a few hours, so the visit is relatively short. The other nearby attraction is the Natural Park of the Obarenes-San Zadornil Mountains where you can hike and do other active tourism activities. To supplement the trip, you can do an excursion to Oña and then stop in Poza de la Sal and Briviesca. Towards the north, you can do an excursion to Medina de Pomar and end up in the north of the province in Espinosa de los Monteros.

The first reference to Frías is from the second half of the 9th century. It was one of the towns that arose during the first wave of settlers that came to the Tobalina Valley from the mountains. From then on, it was aptly called “Aguas Fridas” (“Cold Water”) due to the temperature of the water that came down from the peaks.

After the year 1000, this area of Burgos was incorporated into the kingdom of Navarre, being controlled by the vassals of King Sancho III the Great up to the town of Oña. Due to conflicts between the people of Navarre and Castile, castles and fortifications multiplied throughout the history of Frías. In 1504, after Navarre’s defeat at Atapuerca, the entire comarca was reincorporated into Castile.

In the late 11th century, the Lord of Biscay, don Diego López de Haro, attempted to expand his estate to the Ebro River. In 1200, Alfonso VIII defeated the people of Navarre, expelling them from Álava and Gipuzkoa. In 1201, to strengthen the border with Biscay he ordered that Petralata Castle be dismantled to use the materials to build a new one in Frías. The next year he granted Frías a fuero (set of laws) in order to promote its repopulation, taking as an example the fuero of Logroño. It freed the inhabitants of Frías from the right of succession and tolls in the whole kingdom as well as giving them the right to elect their mayor. To stimulate the economy, two weekly markets were authorized. Kings Ferdinand III and Alfonso XI confirmed the generous fuero. The town continued to prosper until King John II granted it the title of city in 1435.

The city’s prosperity and the weakness of Kings John II and Henry IV coincided with the rise of Pedro Fernández de Velasco, called “the good Count of Haro,” whose family gradually acquired an estate consisting of places in Tobalina Valley starting in the 14th century. In 1446, King John II granted him lordship over the town, and he submitted it to a rigid control and raised its taxes.

In the summer of 1450, the knights Juan de Leziñana, Juan Ortíz de Valderrana, Ochoa de Salazar, and some others took up arms and expelled Lieutenant Sancho Aguado and the other supporters of the Count of Haro. The count ordered the raising of an army of 1,500 men in Balmaseda which besieged the town for three months. When their provisions were running out, the townspeople waged a night attack and destroyed the enemies’ camp. After negotiations, it was agreed that the villagers would name the mayor and the Count of Haro would name the merino. The attack is commemorated every year during the Fiesta del Capitán. 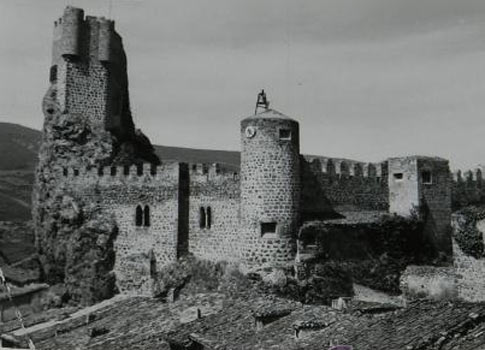 The Velascos received the title of dukes of Frías from the Catholic Monarchs in 1492, joining the title of constables of Castile hereditarily in the following centuries. Frías remained under their control until 1811, when feudalism was abolished in all of Spain.

What to see in Frías

The town is built on a rock called “La Muela” (“the Molar”), an extraordinary union of geology and architecture.

Frías Castle is a Gothic building with traces of the Romanesque style constructed between the 12th and 15th centuries. Its history dates back to the first fortresses from the 10th century. In 1201, on Alfonso VIII’s orders it assumed the defensive function of Petralata Castle. The defensive wall was built that year. A few years later, its new lord, Constable don Pedro Fernández de Velasco, reinforced it in order to ensure his domain over the town. Its pointed entrance is preceded by a drawbridge and protected by the wall with battlements and embrasures. The castle’s keep is the symbol of the city. In the residential section of the castle, you can see capitals decorated with chivalrous and mythological scenes.

Houses with wooden framework hang over the gorge and are spread out on the slope known as “La Muela”; for that reason they are called “Casas Colgadas” (“Hanging Houses”). The southern entrance to the town has the best view of these constructions.

Among the monuments that remain from the town’s commercial and defensive past is the Church of San Vicente, with its multiple Gothic and Renaissance chapels. Its Romanesque portal is found in the Cloister Museum of New York. It seems that it was sold to defray the cost of rebuilding the primitive Romanesque church, whose tower fell in 1904. The current church is a product of several eras and renovations. It has three altarpieces: Cristo de las Tentaciones, which is Baroque, Soledad, and Mayor, which are both Neoclassical. The Visitation Chapel is protected by an exquisite grill and has a 16th-century altarpiece by the painter Juan de Borgoña and the tombs of the founders, the Jewish convert Juan Sánchez de Ochandiano and his wife Juana Sánchez de Medina, both with Plateresque decoration.

A series of arches on the church’s exterior mark a space set aside for the concejo that was destroyed by the French during the Peninsular War.

In addition to the remains of several convents there is another church called the Church of San Vitores, documented as early as 1211. It began to deteriorate in the 16th century and after various incidents it was refurbished in the mid-19th century. Its most notable aspect is the Gothic portal on its southern façade. Its two-story bell tower stands out in its silhouette.

The Gothic Bridge, with its nine arches and 139 meters of length crossing the Ebro River, is at the town’s entrance. It was a Roman construction rebuilt several times in the Middle Ages. The Roman road passed over it which joined the plateau and the Cantabrian coast. Travelers used to have to pay the bridge toll underneath the arch in its center. 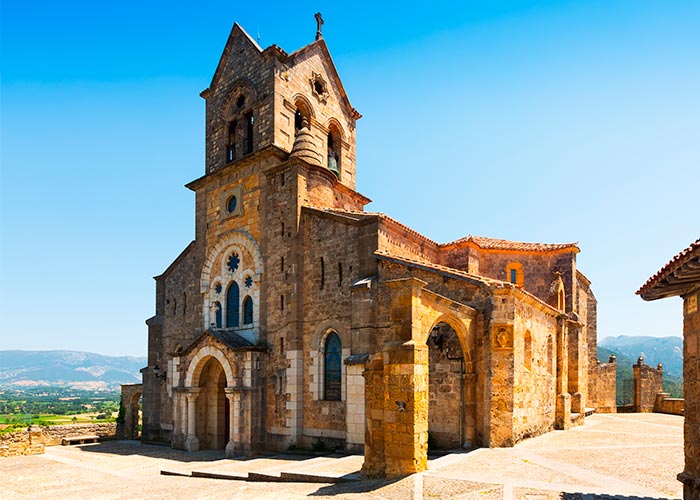 Some 13 kilometers southeast of Oña is Poza de la Sal, which owes its name to the salt mines exploited there from the pre-Roman era until not too long ago. The town preserves remains of its defensive wall, castle, and the medieval outline of streets and town squares. The Church of San Cosme and San Damián is a Gothic construction from the 13th and 14th centuries with a Baroque portal and noteworthy chapels and altarpieces inside. The gardens of Félix Rodríguez de la Fuente commemorate him in his hometown.

From Poza de la Sal you can take a path that passes through the main enclaves of the Natural Park of the Obarenes-San Zadornil Mountains which connects Frías, Oña, and Poza de la Sal. You should begin your visit at the Casa del Parque (Park House), set up in the old rooms of the Monastery of San Salvador in Oña which functions as a visitors center. It includes a glass overlook with views of Oca Canyon. The Obarenes Mountains are the southern extreme of the Cantabrian Mountains whose points of special interest are Tobera Waterfall, Cillarperlata Reservoir, and the hiking paths around Trespaderne.