The beautiful city of sieges

Girona has one of the best preserved old towns in Catalonia, whose old stones show its amazing cultural and military history. In its surroundings there are many natural places where you can go on excursions.

Plan your stay in Girona

This important monumental city has a very historical environment, especially in places like the Cathedral and the Jewry. Among the localities in which you can go on day excursions there are: Peratallada, Pals, Palafrugell, Banyoles, Besalú and Sant Feliu de Guíxous.

What to see in Girona

Nowadays the city is a mix between medieval and modern styles due to the buildings that are in it dating different epochs.

The Carrer de la Força, was since the X century to the year 1492 the main artery of Call, the old Jewish town that is really good preserved today. Inside of the Jewry there are: an old synagoge dating back to the XV century, and the Bonastruc Ça Porta Centre current Museu d’Historia dels Jueus.

From the carrer de la Força you can also see the Santa María Cathedral which dates back to the XI and XX centuries. Apart of its majesty and amazing architecture and decoration, in its inside there are the sepulcher of Ramón Berenguer II, an impressive cloister and the historic museum of Tresor. 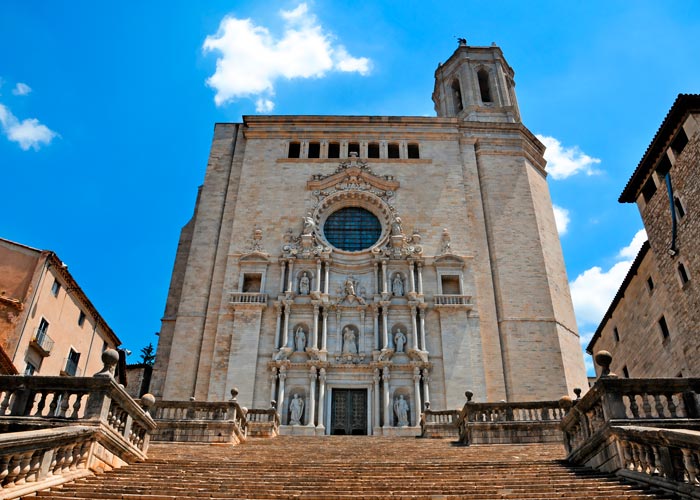 In front of the Episcopal temple you can see the Pastror’s House (current Justice Palace), and the Pía Almoina (old benefic institution). Very close to these places there are the Arabic Baths dating back to the XII century, that despite of the name were Roman thermal waters.

In the North, on the outside of the medieval city, it is located the Sant Pere Galligants Monastery,where we can find today the Museu Arqueologic. There are also some interesting Romanic churches like the Sant Nicolau Church (XII century), or baroques like the Sant Feliú Church (XII-XIII centuries).

In the South of Barri Vell, there is the old labor-union town. And we also have to mention the Rambla de la Llibertat and the Fontana d’Or porches.

Outside of the city centre, you should stare at the amazing buildings, some of them works of the architect Rafael Masó (1880-1935), who has his own Casa Masó.

We also have to mention the modernist Harinera Teixidor Factory, from the 1911; the Casa de la Punxa, from the 1922; the Pharmacy of the Old Hospital Santa Caterina; and the Parc de la Devesa with 2.500 bananas.

Among the museums we want to highlight the Museu d’Art, the Museu d’Història de la Ciutat and theMuseu del Cinema.

Catalonia, cathedrals, Girona
It may interest you...

The Santa Margarida volcano, a perfect cone with a hermitage in the centre of its crater
La Garrotxa Volcanic Zone Natural Park is a curious environment that overlooks part of the Más información

Marimurtra Garden, one of the most beautiful balconies to the Mediterranean Sea
Pleasure and caution were the elements that articulated the thought of the Hellenic philosopher Epicurus. Más información