Cuenca is a small city full of tourist attractions as well as relaxing spots where you can relax: an idyllic place to live surrounded by its beauty, peace and quiet. The point of this blog post is to acknowledge Cuenca’s commitment to the arts. Do you want to join us?

Our trip begins in Santa María and San Julián Cathedral: an outstanding cathedral built in the 12th century, which together with the one in Ávila is one of the first examples of Gothic cathedrals in Castile. Besides, this cathedral has also a French style touch, exclusive of French cathedrals at the time, because of the influence of Norman Knights in King Alfonso VIIIIn spite of having been remodeled several times over the centuries, the last remodeling, after a collapse in the beginning of the 20th century, brought its original look to the façade again. Thus, this cathedral looks like it was like almost a millennium ago, retaining its natural beauty. Moreover, its interior reveals a breathtaking space, which is home to plenty of artworks such as Pedro de Mena’s Dolorosa.

A Provincial Museum, an archeological museum where to learn Cuenca’s history since time immemorial, can be found inside the Casa Curato de San Martín. The Roman, Muslim and Visigothic Cuenca are present in all the sculptures, ceramics, coins, capitals and other pieces coming from other sites in the province, such as the ones in a Roman city called Segóbriga. 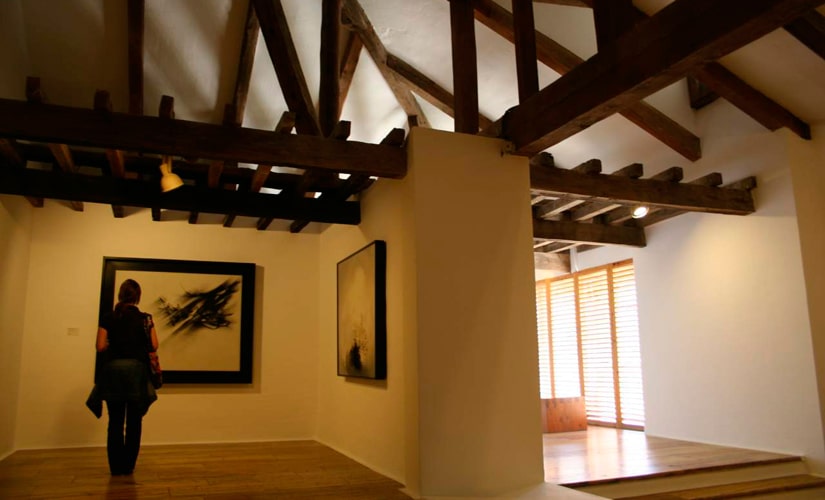 However, the most important artistic attraction in Cuenca is the Hanging Houses: both because of its architectonical oddity as well as the museum it holds – the Museum of Spanish Abstract Art. This museum contains a permanent exhibition of the most important abstract artists in our country in the 50s and 60s: Oteiza, Zóbel, Saura, and Tàpies (some of them belonged to the so-called Cuenca School). This collection goes through 100 artworks selected to represent this artistic stage in our country: the continuation of a movement initiated by the historical avant-gardes, a perfect combination of material geometrical, gestural abstractions.

Just to finish, very close to the area, one can visit Cuenca’s Enchanted City: an itinerary through this natural park to learn about karst geological processes and whimsical formations. There are plenty of masterpieces sculpted by nature just to prove what an artist city Cuenca is!