There are places in Spain that most people would like to visit, that are on the bucket list. And more specifically, there are parts of the north to see live, at some point. Landscapes, corners and super magical places that seem to be taken out of a fantasy story. But perhaps there are some areas that are out of the ordinary and well worth considering. For example, the spaces that occupy this article. They also look like a fairy tale, although this time with gothic aesthetics: the cemeteries of Asturias.

Although they are not always considered as destinations to visit, these Asturian cemeteries have more to offer than it seems. Whether for their position, for their decoration or for the unique style they provide. These eternal resting places can generate a different travel experience. Some of them are not only considered one of the most beautiful cemeteries in the country, but also in the world. If your course takes you to the north, take note of these destinations. 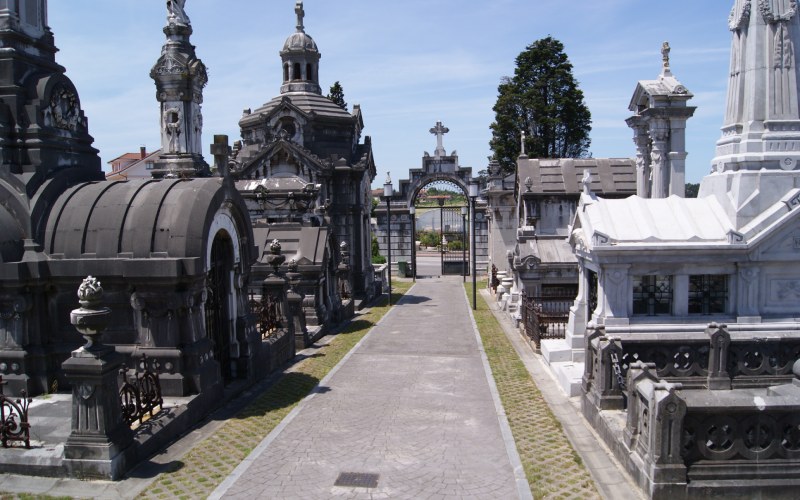 The list starts with one of the most important, since this cemetery in Avilés dates back to the 19th century. It is also part of the ASCE, the association of significant cemeteries in Europe. And it does not stop there, because it is also number one in the EUCEMET project, whose acronym stands for European Cemeteries: Gardens of Souls, Diversity and Heritage. Such an initiative is responsible for giving visibility to this type of spaces and to enhance their value.

Throughout its history it has housed tombs and mausoleums of all kinds. Some of the most important people and families buried there, whose funeral monuments are worth visiting, are the following: the Marquis of Teverga, María Suárez and her family, Armando Palacio Valdés, the García Morán family, Bonifacio Heres or the Counts of Peñalver. All their tombs can be enjoyed inside, being such architectures as peculiar as the cemetery itself. 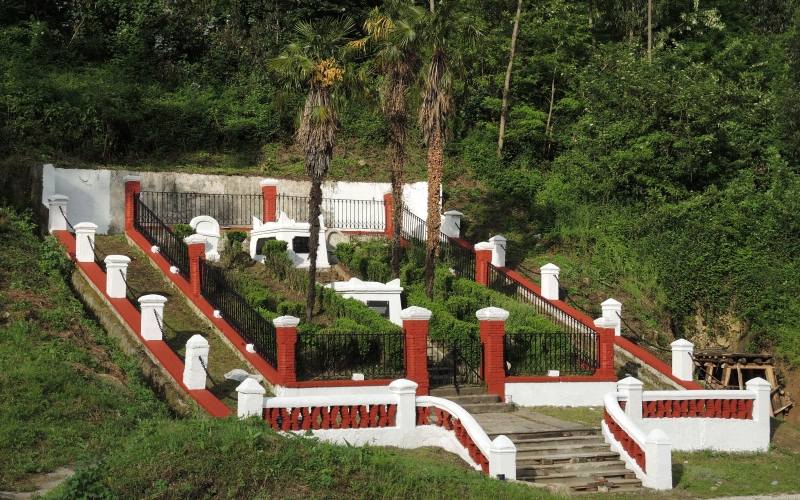 Cemetery of great importance due to several factors. One of them is that it is the only Protestant cemetery in Asturias. The second reason is that it is located where one day the factory of Mieres was found, of great importance in the area of industrialization. Finally, here is buried Numa Guilhou, owner of the factory and one of the great architects of the mining development of the region.

The cemetery spent many years buried in the undergrowth, with no one in charge of taking care of it. But this changed in 2015, when the owners of the land and the city council reached an agreement. Today it can be visited without a problem, with all the graves of whoever was a worker or relative of the same visible. A place with as much history as every tombstone in it. 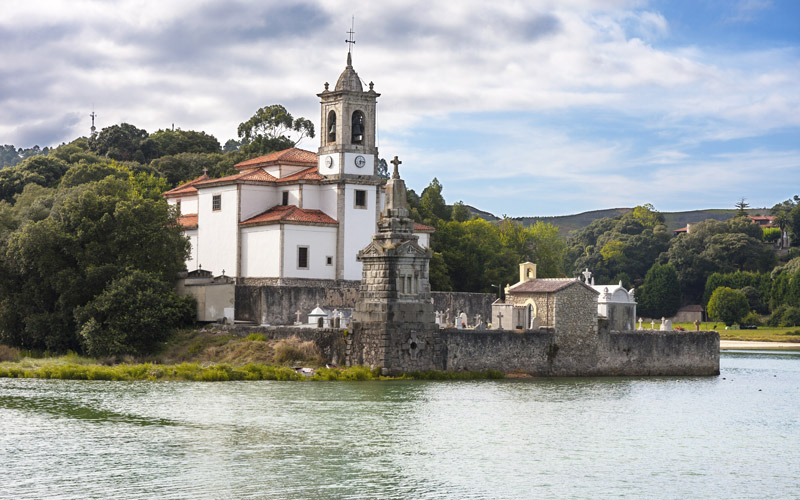 Niembro Cemetery, the best excuse to get into the Asturian charm | Photo: Shutterstock

Possibly the most movie-worthy place on this list. Not only for being in front of the sea and its plant. The reality is that it has literally been the scene of three feature films. Observing it, one can realize the reasons, being as peculiar as it is attractive. Undoubtedly, this cemetery has a special charm. At sunset, with the orange lights of the sky, it can be a perfect place to stop and admire the calm peace it possesses.

Its church can be seen from quite a distance, being distinguishable and gaining strength from the other side of the estuary. Its history, its location and the surrounding greenery make the Niembro cemetery worth a visit. El Abuelo, La Señora or El Epílogo are the three productions where this Asturian cemetery can be seen in the background. 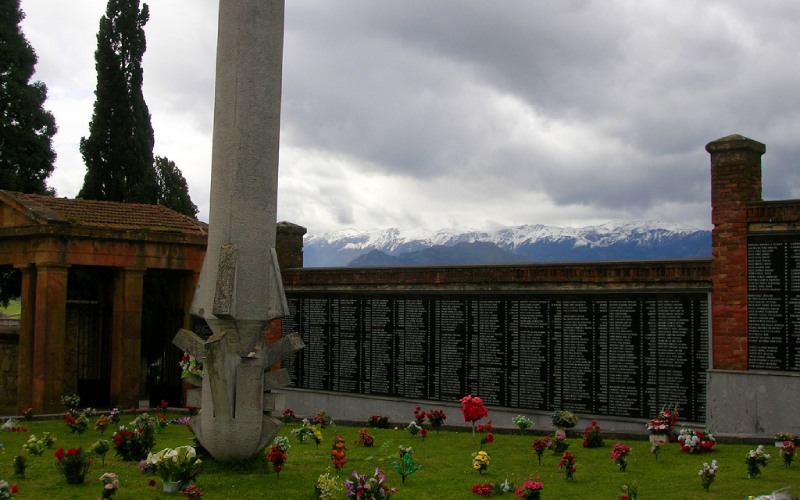 Mass grave in the outskirts of San Salvador. | Wikimedia

Contrasting with the previous one and its simplicity, the cemetery of San Salvador in Oviedo is large and spacious. Designed by the architect Patricio Bolumburu, it was intended exclusively for the Catholic rite. Its 60,000 square meters are divided into two streets, one longitudinal and the other transversal. There are four grids that we can find, being in the center the chapel with eclectic style. It also coincides with the highest point of the whole environment.

Also noteworthy are the two porches at the entrance of the cemetery. One of them has five arches designed by Juan Miguel de la Guardia. The other has Doric style columns reminiscent of ancient Greece, created by Javier Aguirre. Associated to the place, in its exterior, is the Common Grave of Oviedo, where republicans who died during the Civil War rest. Elements that justify that it is one of the most remarkable and unique cemeteries in Asturias. 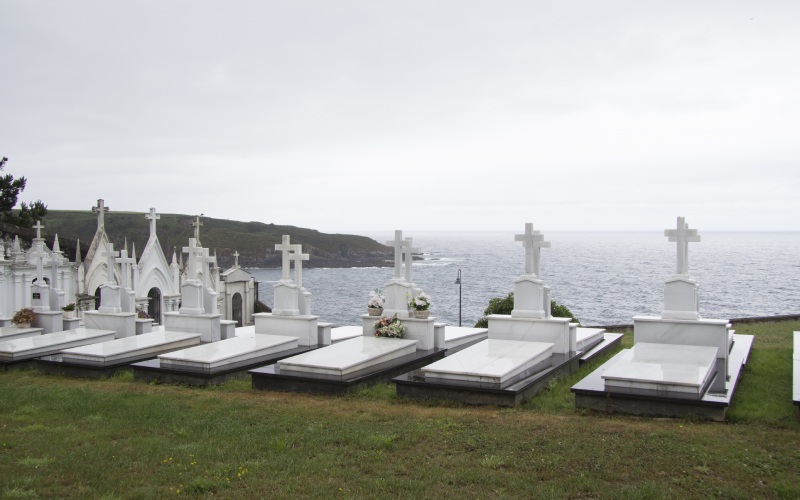 It’s time to name one of the most notorious cemeteries on the planet. It will not be in few lists in which this corner by the sea with tombstones, pantheons and white sculptures that could almost qualify as one of the best postcards of Asturias. Located on a cliff, overlooking the Bay of Biscay and the port of Luarca, there is no doubt in defining it as one of the most peculiar Asturian cemeteries.

It is also one of the oldest modern cemeteries in Spain, since it was built in 1813. It is usually a must for people who dare to do the Camino de Santiago following the route of the North or the Coast, since Luarca is one of the places through which the route passes. Likewise, as the most illustrious member stands Severo Ochoa, Nobel Prize in Physiology and Medicine in 1959. Humble, his tomb is hardly distinguishable from the rest of those that populate the white place. 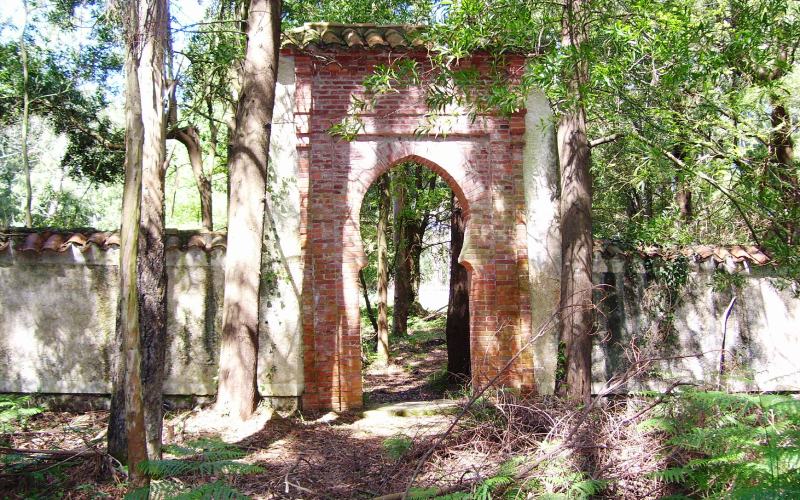 Entrance to the Moorish cemetery. | Wikimedia

It is not time to say goodbye yet to Luarca, because in this municipality there is another cemetery in Asturias that is worth mentioning. It is called the Moorish Cemetery. It is a place of eternal Muslim rest built in 1936 coinciding with the beginning of the Civil War. It is no coincidence, since it was built with the idea of burying the fallen North Africans, many of whom were forced to fight against the Republican side.

Most of those buried in this cemetery died in the battle of El Escampalero. The exact number is not known, but it is estimated that there are around 300 within its walls. This makes it one of the few Muslim cemeteries in Spain, along with those of Zaragoza and Andalusia. 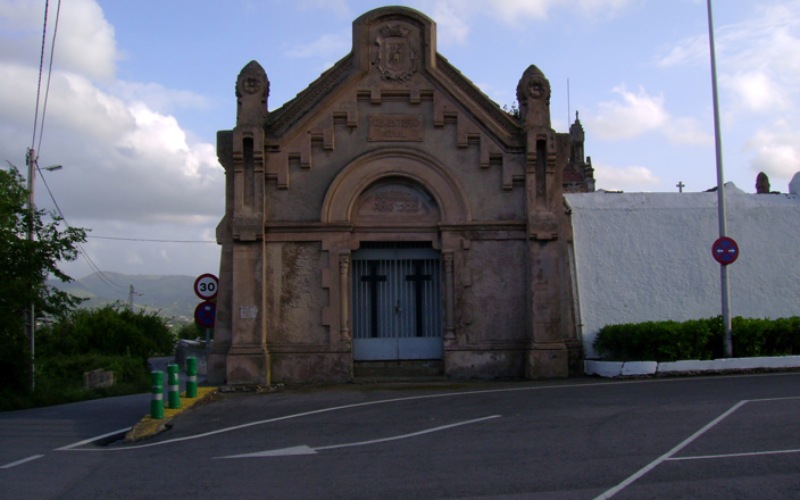 The cemetery of Asturias that closes the list was the necropolis par excellence in Gijón during the twentieth century. Although its origin is much earlier, specifically from 1876. It is one of those that houses more deceased, today exceeding 32,000 graves. Cándido González was the architect of the enclosure, rectangular in shape and with its chapel at the back where the civil cemetery is located.

The main gate of this area was designed by Miguel García de la Cruz in 1902. It is only one of the different corners of importance of which it boasts. Another of them is the tomb of Rosario Acuña or the monuments in the form of homage to Luis Truan and Laureano Suárez. Also, we cannot forget the chapel built in 1894 designed by Mariano Medrade.

ASTURIAS, Lugo, Oviedo, SPAIN
It may interest you...

Top 7 Must-See Jungles in Spain
Top 7 jungles in spain to visit, their location, access and history

Naveta des Tudons, the guardian of time | 7 wonders of Ancient Spain
The history of the naveta of tudons, origin and current state in our country.

San Xoán of Portomarín, the church-fortress that was relocated stone by stone
The Way to Santiago has led to the construction of an enormous number of monuments Más información