Fishing harbor framed by a white slate roofs, Luarca forms one of the most beautiful urban ensembles of the west coast.

Plan your trip to Luarca

It is possible to explore this beautiful coastal town in one day. From its palaces and houses of Indians to the lighthouse; there is plenty to do in Luarca, a place full of charm place that does not disappoint the visitor. The Giant Squid deserves special mention, which we must not miss because it is a unique museum. You can also continue the break for the nearby town of Navia, or a little further away, heading east, by Cudillero and Muros Nalon.

The origin of the settlement is related to the Cabo Busto, near which there was already communities of hunters and gatherers in the Paleolithic Inferior.

No lack near the village testimonies of neolithic tumulus necropolis characteristics (La Granda or Piedrafita) or eight fortified settlements (the Siege of the Moors, in walls, and the Castiecho in Otur, among others). Later, the Romans interested them to exploit gold astures, leaving a deep imprint of the extractive industry in Esva river basin, still visible.
Already in the year 912 is written the name of Luarca in a fake diploma of Bishop Pelayo, although the personality of this territory up to take shape from the grant, in 1270, of the “founding Charter of Puebla de Valdes” by king Alfonso X El Sabio. At that time the capital Valdesana enshrined as the final administrative epicenter of the council. Another significant milestone in local history was the authorization granted in 1338 for the import and marketing of salt, a privilege in the Middle Ages. As a milestone in the valdesano landscape remains the Tower of Villademoros, factory and possible late medieval and earlier origin came to have fences and trenches that made more unapproachable.

The port increasingly became an engine of its economic and social activity. As in other anchorages Cantabrian fishing whale was developed and in 1486 the Ordinances of the Most Noble Guild of Merchants were formed. In addition to its connection with the sea, Luarca is also head of a mountainous council where it is still recognizable as an ancient nomadic community of individuals.

What to see in Luarca

Old dock and neighborhood of the Fish Luarca

Throughout the history of Luarca, it was ruled by the French and English, and was forced to reinforce its limits with the construction of the fortifications of La Atalaya and La Punta de Castiel, thus increasing the protection of the population offensive. This played an important role in the war of Independence. Emigration in the nineteenth century to American destinations, particularly Cuba and Argentina, also marked the landscape of the town, since those who returned with enough capital promoted the construction of numerous houses with garden characteristic silhouette.

Before wandering through the streets, we recommend checking out the Mirador del Chano. The Black River, the backbone of the urban fabric of the valdesana capital whose neighborhoods are linked by seven bridges, includes the famous legend of the “bridge kiss.” This name was inspired by the tragic love story given between the daughter of the noble knight Hidalgo and the Dread pirate Cambaral, whose heads were cut by the bridge when they were kissing passionately before the flight. The legend of Cambaral left a deep mark on the villa even to carry his name fishing district whose center is at the Mesa Guild of Merchants and Navigators, which for centuries brought together representatives of the corporation for making decisions , of which depended largely on the local economy and prosperity.

Around the current table, built on the remains of an old building, fourteen recent ceramic panels depicting historical landmarks and legends of the town from the Middle Ages, among which are the months of 1810 are arranged to Luarca he served as capital of the Principality while Oviedo remained occupied by French troops.

Apart from the medieval core consisting of the districts of El Cambaral, The Fish and The Carril, are the bourgeois neighborhoods Barcellina and Villar, villages fifths of Indians from well into the nineteenth century. Among the notable buildings in Luarca stands the Palace of the Marquis de Ferrera, current seat of the House of Culture, of late medieval origin and reformed successively from the sixteenth century. This monumental building has two wings, chapel and stables and is also known as the Palace of the Moral by blackberries once grew in a garden in front. 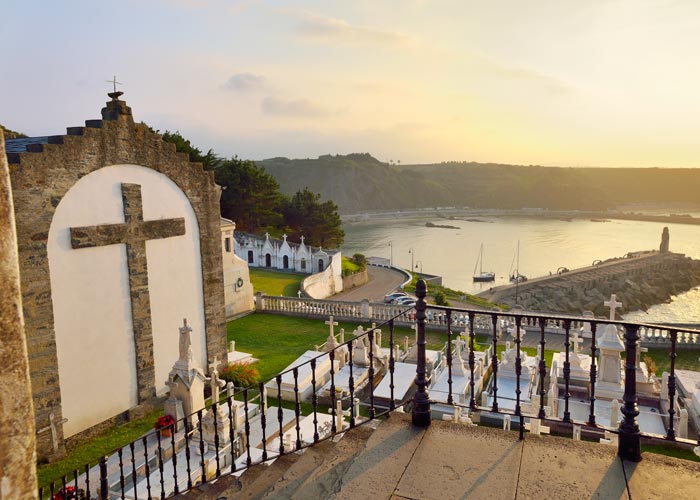 Indian houses proliferate in the neighborhood of Villar and nearby. In Barcellina Villa Excelsior, the spectacular palace of Manuel del Busto is located. Here, you can also see the Guatemala House, built by the architect Juan Miguel de la Guardia in late nineteenth century pictorial decorations including Tomás García Sampedro. The same author and his brothers designed in 1899 for Villa Argentina. With singular cast iron conservatory, chapel and striking garden full of palm trees, it is now a hotel complex.

Finally, notable for its architectural quality, Villa Rosario, a house renovated by Julio Galán after the ownership change hands in the second decade of the last century in projecting their attics. Another building of interest is the Fuente del Bruxo (1764), neoclassical and due to Julio Mendez walks.

It is highly recommended to observe the panoramic view offered by the famous and beautiful Camposanto of the town of Luarca, located on top of the Watchtower and houses the remains of the most illustrious son of the council, the Nobel Prize Severo Ochoa Medicine. Next to the cemetery is the Faro de Luarca (1860) and, on top, the Chapel of the White or The Watchtower, rebuilt several times since the Middle Ages. There an image of vague origin custody: in the village some people consider thrown into the sea by Protestants and others argue that part of the figurehead of a ship.

Among the museums of Luarca is the Giant Squid Cepesma Aula del Mar, in the port of Luarca, where the largest and most important collection of existing giant squid in the world is exposed. Unfortunately, the museum has been torn down by the sea, after a strong current, and remains closed until further notice.

Very close, in La Mata, is the Park of Life, dedicated to the promotion of renewable energy. In San Martin, a town very close to the capital, is Valdesana Rural Luarca Ethnographic Museum. Other points of interest are Fonte Baixa Gardens in El Chano, the Interpretation Centre Esva Sickles, located in the Valle de Paredes specifically in Aguera, and the Astronomical Observatory Muñás.