On the eastern coast of Asturias, where the Cantabrian Sea becomes evident, it is possible to observe one of the most curious phenomena of nature. It is the Bufones (blowholes) of Llanes. The water of the sea enters with fury, through the cracks of the limestone in the coast. Its same force makes them reach the surface. This way they generate a phenomenon that reminds the one of the geysers, forming jets of more than twenty meters of height.

A wonderful spectacle that is very close to one of the most beautiful villages in Asturias. The three bufones, declared Natural Monument, are included in the Protected Landscape of the Eastern Coast. They offer a unique image of unusual geological features.

The disintegration of the limestone rock thanks to the contact of the rain water generates small cracks, connected with the marine chasms, that reach the level of the sea. The effect of the erosion produced by the salt water enlarges these original cavities, of karstic type, forming caves that communicate with the vertical conduit. The rest comes from the action of the waves, when the tide rises; which cause the air or water accumulated in the cave to be compressed and pressed out.

In the surroundings of the village of Puertas de Vidiago, on the route of the Way to Santiago, a path leads to the cliff where you can enjoy one of the most beautiful views of the entire coast of Llanes. These are the Bufones de Arenillas blowholes. They are distributed along the coastal strip that goes from the source of the river Purón to the Pozo de la Salmoria. Here is the biggest blowhole of the whole coast, through which the Northern Way to Santiago passes. Not in vain, it can reach up to 40 meters.

The blows of the waves expel the air from the lower galleries through the vents; but on days when the sea is rougher, a deafening roar is produced. These are the “moans of Bromadoriu”, which can be heard from several kilometers away. In Puertas de Vidiago you can find the Ídolo de Peña Tú, with paintings and engravings from the Bronze Age, declared a National Monument.

These bufones owe their name to the fact that they have deposits of gravel and sand right in the exit hole. Its maximum expression is produced in autumn and winter thanks to the strong waves of the area. A legend says that an animal, a cow or a goat, fell one day on one of the holes and the strong pressure of the sea threw it into the air.

Llames de Pría serves as a starting point to reach Guadamía beach; a beautiful river spot that serves as a prelude to an exceptional field of blowholes, the Bufones de Pría. From there you can enjoy a remarkable panoramic view of the eastern coast of Asturias and observe several species of coastal birds such as seagulls and cormorants.

On the beach it is common to find the remains of small invertebrates such as winkles, sea urchins, mussels, anemones or starfish. Further on a natural rock bridge, leads to the beaches of Villanueva and Cuevas del Mar. It should not be forgotten that nearby is what many consider the smallest beach in the world, Gulpiyuri.

Legend has it that in this place there was a fight between fairies and witches. The witches wanted to create a laboratory to make their devious potions. The fairies wanted to stay and keep their spare wings and fill everything with fairy dust. One day there was the much feared encounter between the two sides and a fight took place. Both groups took refuge in caves and stayed there so long that later it was not possible for them to leave. Now it is said that their spirits are still haunting them and that they are still trying to get out.

Only 10 kilometers away is Ribadesella, one of the most beautiful towns in all of eastern Asturias. In it the annual descent of the Sella is celebrated, also called the festival of the canoes. The zone also is known by the existence of different exceptional caves like the one of Tito Bustillo. 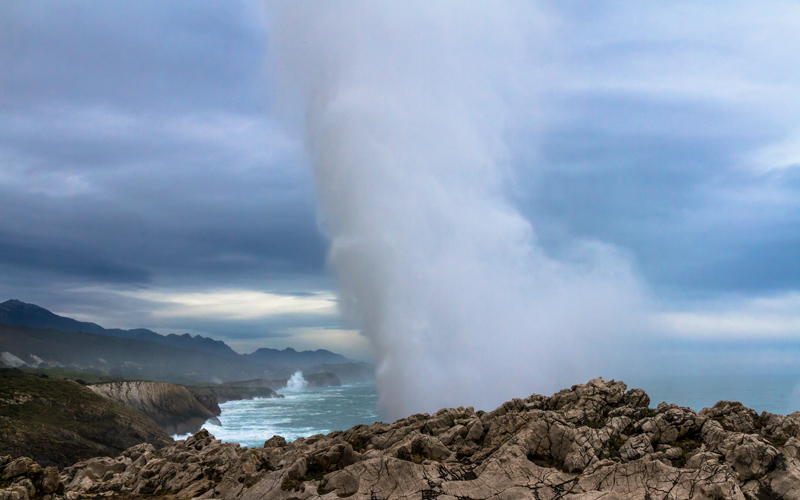 Near the village of Castro de Santiuste are the Bufones de Santiuste; which can be reached from the N-634 near the town of Buelna. This area boasts the most spectacular waterfalls in all of Asturias. Following the indications to the beach of Cobijeru, one of the smallest of the principality, and later advancing by the line of the cliffs you will get to the indicated place. Nearby is the Pindal Cave, with its important paintings of bison, horses, crows and even a mammoth.

As in the previous cases, it also has a legend. Tradition says that Cuélebre, a character from Asturian mythology, lived in these lands and did not stop lamenting by emitting a thundering sigh. One day a young woman bewitched by the sound came in search of him. When they saw each other they fell in love and love turned the beast into a handsome young man. Her father, upon surprising them, threw them into the sea and since then he has continued to snort for them.