Gulpiyuri is an ancient word of Asturian origin that means circle of water. And it is the name chosen in Asturias to baptize what is considered the smallest beach in the world. It is located in the municipality of Llanes, next to the village of Naves. Two decades ago, it received the title of Natural Monument. A few years ago, some time later and thanks to social media, the popularity of Gulpiyuri beach increased.

But apart from the popularity and the constant sharing of the places visited, beyond the already worldwide renown, this Gulpiyuri beach is worth a visit. For its peculiar characteristics and also for its beauty. And for swimming surrounded by a unique landscape, of course.

The keys of Gulpiyuri beach 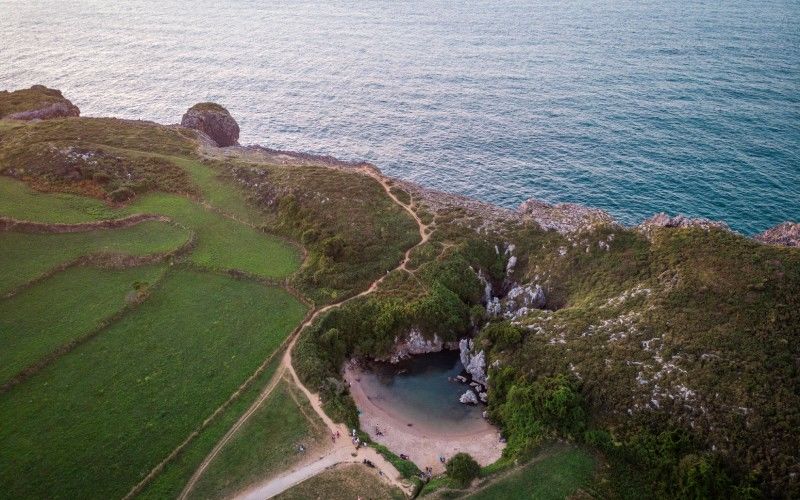 View of Gulpiyuri beach from the air | Shutterstock

Gulpiyuri is a spot full of peculiarities. First of all, as already mentioned, it is the smallest beach in the world. With its 40 meters long, this is how it is considered all over the planet. In addition, it has no direct access to the sea. It is an inland beach where the Bay of Biscay can be seen behind the rocks. Its strength, its thrust and its waves. But its waters cannot be observed from any of its sides, which causes a strange and pleasant feeling in those who stare at it.

It is formed by white sand, but at high tide it can hardly be seen. At low tide the opposite happens. Then it registers a phenomenon called drainage, by which the water escapes by the same place by which it entered, leaving the sand to dominate the environment. Another reason why this beach will conquer the traveler. 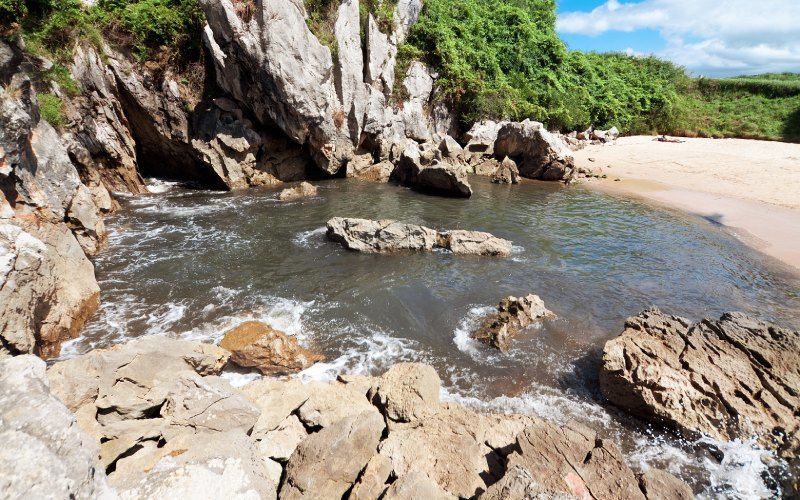 The sea sneaks through the rocks at Gulpiyuri beach | Shutterstock

As you can imagine, it is difficult to find a place to settle down in the summer months, as there are many visitors who, in recent years, have come to know it. The space, of course, is limited. It does not have any kind of service and access must be made on foot, following a path that crosses the green meadows of Asturias. So when you finally step on that sand you have the countryside behind you and the rocks in front of you, with the sea filtering under the cliff. It is quite a spectacle of nature.

The beach of Gulpiyuri was born by the force of the sea, which chiseled the rock to create nooks and crannies under the ground while the roof sank to form the doline that is enjoyed today. This is the name given to this phenomenon that causes the sea to end up seeping through unimaginable places and thus was born this beach, which was equally unimaginable.

Spots near the beach of Gulpiyuri

There are many places in Asturias that can be visited to complete a trip to the beach of Gulpiyuri. The most obvious, because of its proximity, is the village of Naves, a quiet village that belongs to the council of Llanes and has about 200 inhabitants. In addition to the beautiful environment in which it is located, the church of San Antolín de Bedón, a Benedictine temple that was built in the thirteenth century, stands out. 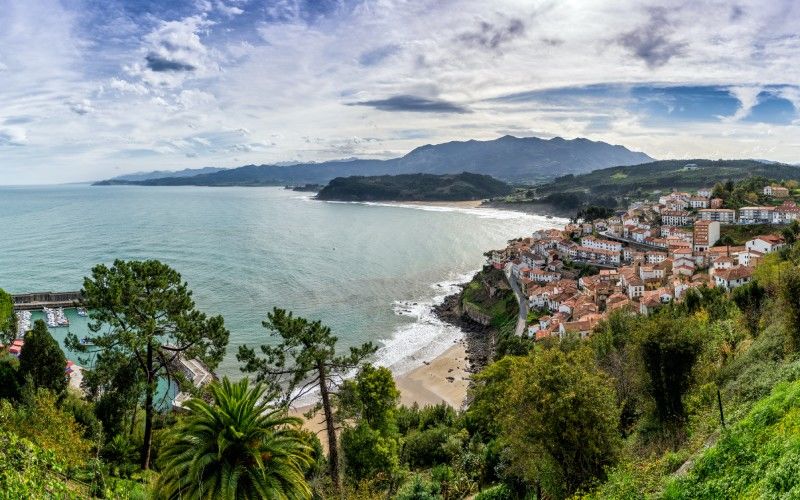 Panoramic view of Lastres, one of the most popular fishing villages in Asturias | Shutterstock

If you have the opportunity and want to get lost in the wonders of this coast, heading west you can find Ribadesella, just 20 minutes away by car. This is one of the most popular fishing villages in Asturias, for its perfect symbiosis with the sea, for its impressive old town, for its promenade and for the cave paintings of Tito Bustillo. Following the coastline still to the west, Lastres, another fishing village, smaller but just as beautiful, awaits. If the visitor still wants more, it is not the visitor should take a look to this week along the Asturian coast that can conquer anyone. 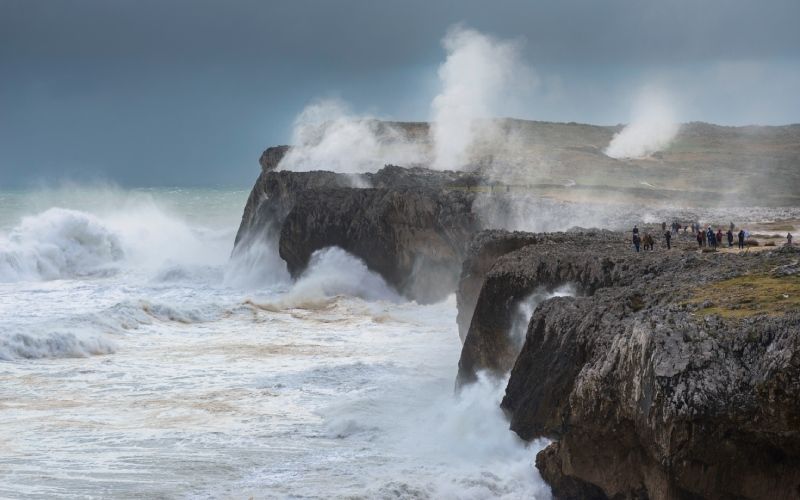 On the other hand, a must on any visit to the Asturian Cantabrian: the buffoons. These water siphons can be seen when the sea is rough. Its effect, especially in the first contact with this natural form, impresses. Not surprisingly, the sea water is ejected by the natural chimneys of the earth, reaching a considerable height. Near this beach of Gulpiyuri, just 20 minutes by car, are those of Pría, perhaps the most popular of Asturias.

Gulpiyuri should be visited at least once in a lifetime 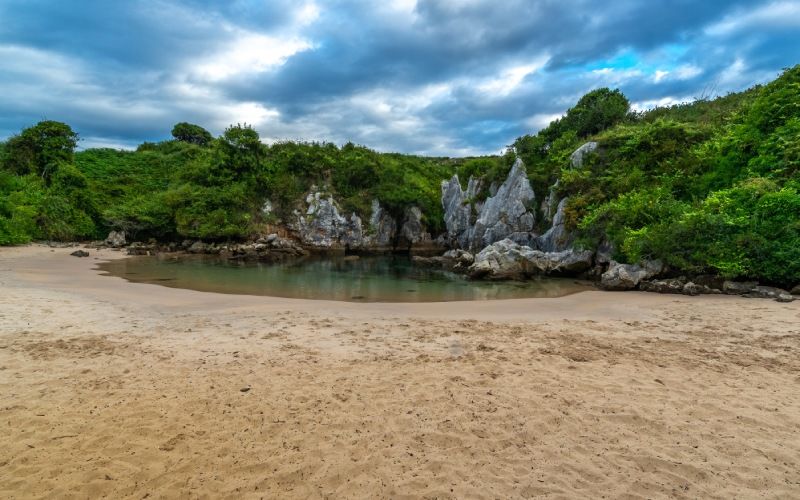 Especially lovers of nature and its amazing phenomena, should visit this unique place at least once in a lifetime. Admire its shapes and enjoy the Cantabrian Sea in a different way: while it sneaks between the openings that the waters themselves have formed by eroding the rock. That peculiar cliff, the Asturian green meadows and the calm waters that reach the white sandy shore are worth a visit. Also a swim, of course.