El Cotillo, in Fuerteventura, is one of the most beautiful coastal villages in Spain. However, it remains a secret for most visitors traveling to the Canary Islands. Among its treasures are its white sandy coves, ideal for sunbathing, water sports or just enjoy its beauty. Of course, it also has historical monuments for those who want to do cultural tourism… It is a very complete town.

An ideal destination for tranquility and disconnection

It is a small village of seafaring tradition with a great charm and full of peace, as it is not yet overcrowded. Therefore, it is also an ideal destination to get out of the routine and completely disconnect from the problems of everyday life.

Strolling through the village you can see how it has preserved its maritime tradition over the years: from its small port full of boats to the dock converted into the gastronomic center of the area. Every day, the fishermen unload the delicacies of the sea that are prepared fresh and naturally, so that visitors and locals can enjoy them in the restaurants of the port. 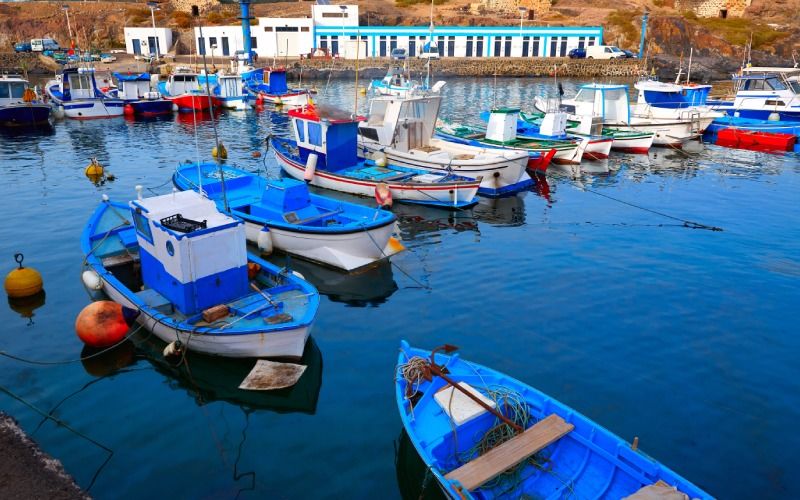 As for the typical gastronomy of El Cotillo, mussels, limpets, fish stew and boiled sea bass take the cake. And for those who want to try something that does not come from the sea, Canarian puchero and papas arrugadas con mojo are also very common in the area.

However, what is most striking about this village is that all the houses are painted white with blue doors. Likewise, you can also find numerous murals with maritime motifs that make El Cotillo an authentic open-air museum.

One of the best known beaches in El Cotillo is Piedra beach, also known as beach of Aljibe de la Cueva. Its waves make it frequented by fans of water sports such as surfing or kitesurfing. Its access is somewhat difficult, but it is worth it to enjoy this virgin beach of more than a kilometer long. 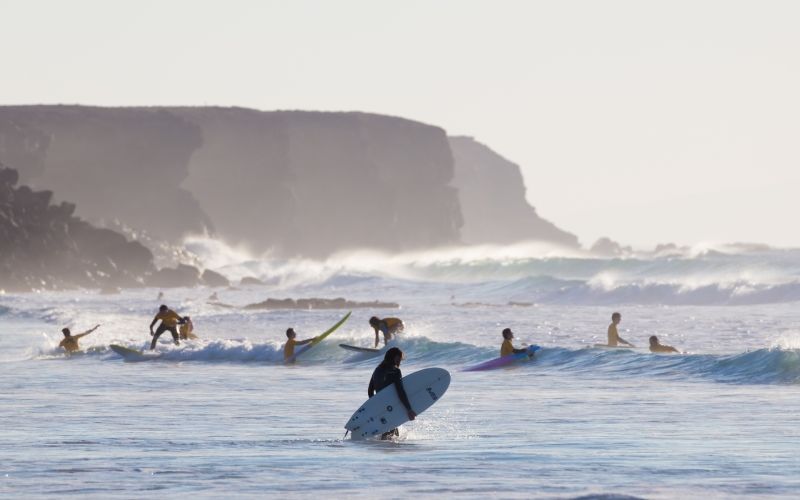 If what you are looking for is an authentic natural paradise, there is a group of coves called Los Lagos. Its sand is white and its waters are crystal clear, allowing you to snorkel or take pictures that could perfectly pass for the Caribbean. In addition, they are very calm waters, since there is a natural reef that surrounds them and protects them from the waves.

The same happens with Los Charcos, which is another set of coves, but this time with the added attraction that from there you can see the Tostón lighthouse. Finally, El Caletón is also ideal for scuba diving thanks to its varied marine life. Of course, it is preferable to go at high tide so that the volcanic rocks do not hinder the entrance to the sea. 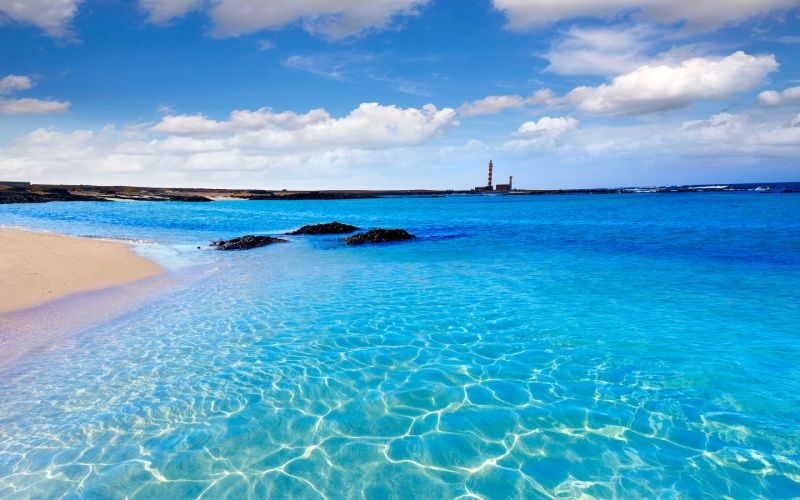 Crystal clear waters in the coves of El Cotillo | Shutterstock

Finally, next to Los Lagos is La Concha beach, which is one of the most famous beaches of El Cotillo. Its sand is extremely fine, its water totally transparent and its privileged location due to its proximity to several restaurants where you can taste the local gastronomy. Other beaches that can be enjoyed in El Cotillo are Aguila beach and Las Escaleras beach.

As for monuments, one of the most famous in El Cotillo is the Tostón lighthouse. It was built in the nineteenth century to signal the Bocaina Strait, which is the one between the islands of Fuerteventura and Lanzarote. Today it is still in operation and houses the Museum of Traditional Fishing. To see a good sunset, this can be a perfect spot, as it combines the sea, the coves and the lighthouse in a single panoramic view. 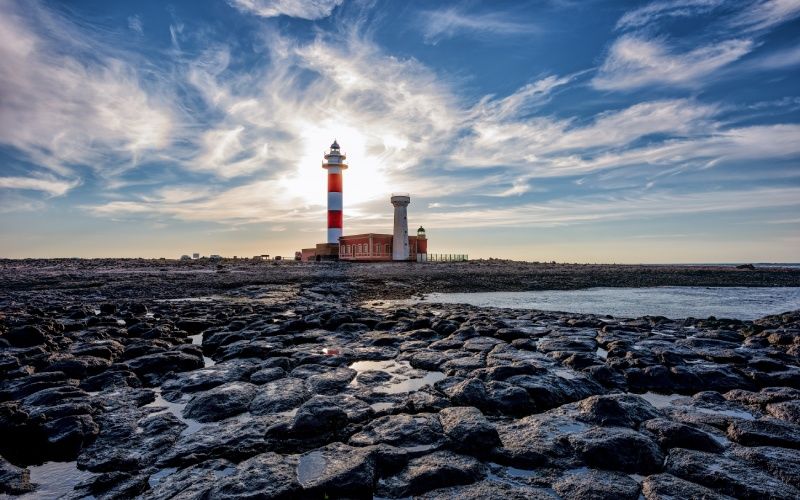 With the same name, the Tostón castle was built in the 18th century to protect the town from attacks from North Africa, the English and the French. This is so because the island of Fuerteventura was a strategic point for the trade of cereals, livestock and cochineal. This fortress is a circular tower with a large diameter made of gray lava stone.

The Tostón castle is two stories high and on its terrace there would have been three or four cannons. Inside it could hold up to 12 people and there was a deposit to store gunpowder. In addition, you can climb to the top and enjoy the views of the cliffs a few meters away. Next to the castle you can see one of the whale skeletons that are scattered throughout Fuerteventura. It belongs to an adult female about six meters long. It is part of the Path of the Cetaceans, which is a proposal that aims to raise awareness about the care of the environment. 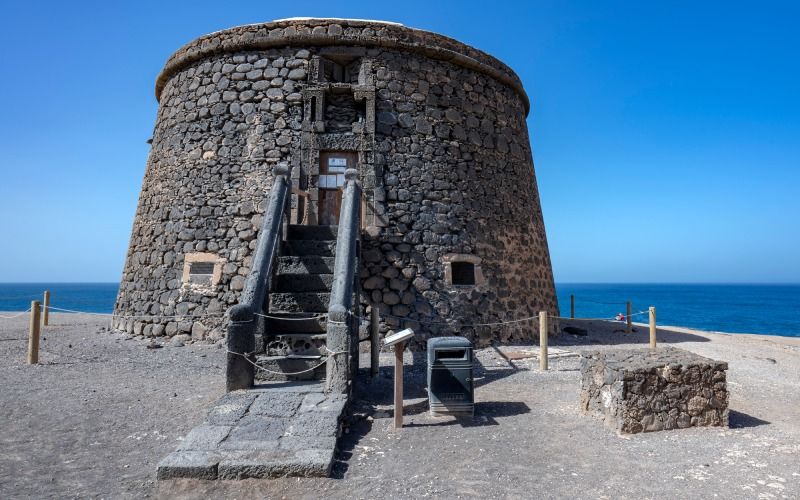 Finally, you can also see the Hermitage of Nuestra Señora del Buen Viaje, which is the patron saint of El Cotillo. It is a small sanctuary of the seventeenth century whose virgin participates in two processions throughout the year. One of them makes a maritime stretch in which it is carried in decorated boats while remembering the dead at sea.

El Cotillo is a perfect destination to enjoy the peace, the paradisiacal coves and its rich gastronomy. Undoubtedly, a place that everyone should discover when traveling to the Canary Islands.

beaches, Canary Islands, Fuerteventura, lighthouses
It may interest you...