Llanes is a coastal town endowed with a beautiful fishing port, interesting architecture and magnificent beaches.

Plan your trip to Llanes

This town is one of the main tourist areas of Asturias, and it is no wonder, because in addition plenty of palaces, remains of medieval fortifications and stunning Basilica of Santa Maria, it has some high quality beaches like Puerto Chicu or Toró. Its port is also worth seeing, as it was made by the artist Agustín Ibarrola, known as “Cubes of Memory”. The visit to this town will most likely take a full day, which can be extended closer to the neighboring Colombres or an excursion to the nearby National Park Picos de Europa.

The territory now occupied the region of Llanes was inhabited since prehistoric times, as evidenced by, among other remains, the Idol of Peña Tú (Puerta de Vidiago). It is estimated that even Llera area was the most densely populated in the Paleolithic Europe.

Around the twelfth century the place was known by the name of “Puebla de Aguilar” because it was within the Lands of Aguilar, dependent Soberrón Castle. In 1225, the site was received by the monarch Alfonso IX of Castile, granting the town charter. Later, King Alfonso X the Wise gave the town a new jurisdiction and initiated the construction of the wall, which would be completed in the fifteenth century. During the medieval period, Llanes depended on various nobles-the Count of Norena, Don Diego Fernandez de Quiñones … until in 1490 it became property of the Crown with the Catholic Monarchs.

Throughout the sixteenth and seventeenth centuries, its port had intense fishing and commercial activity, based on the salt trade and the wealth of their fishing grounds and sardine whale. Its economy began to decline in the eighteenth century as a result of the continuous wars and the institution of the Royal Navy, which led many young people to serve on their ships.

During the War of Independence the town was taken by the troops of General Bonnet; the Municipal Archives and the Palace of the Dukes of Estrada suffered serious fires. Between 1809 and 1812 the French were repeatedly clashed with guerrillas of Llanes, led by José Balmori Sánchez.

Following the disasters of war and the decline of trade and fishing, it began the migration that would accelerate the mid-nineteenth century, continuing until well into the twentieth century. The destination would be mainly Cuba, Mexico, Argentina and Venezuela. Some of those migrants managed to make fortune and returned to their land as rich owners. In Asturias – plus an important work benéfica- the “Indians” built lavish houses or mansions, with its unique architectural style and tropical gardens, they have shaped the urban and rural landscape Asturian.

What to see in Llanes

Construction of the port of Llanes, in 1910

Currently, tourism has become the mainstay of the population, and conditioning facilities and location have earned the designation of Municipality of Tourism Excellence.
Llanes is part of the network of Villas Marineras that stretches for other northern communities and groups the also Asturian Ribadesella and Cudillero, at Baiona, Sanxenxo, Ortigueira and Viveiro Galicia and the Cantabrian San Vicente de la Barquera, Santoña and Laredo.
Llanes has been chosen as the setting for numerous films, short films, commercials and endless visual productions of various kinds. On our visit, we can approach this relationship of the town with the big and small screen through the film Llanes initiative, promoted by the City.

The historic fishing village of Llanes has many attractions: the old town, medieval layout, it has been declared a Historic-Artistic; the port, where the Cubes of Memory Agustín Ibarrola; Indiano mansions scattered by the council, and walks like San Pedro or the river path of Carroceu. To this it joins a stunning setting, with over thirty beaches, some almost virgin-eight enjoy the distinctive Tourism Excellence and many hold the blue-flag and the proximity of the Picos de Europa, which give the municipality of perfect combination of sea and mountains.

From the medieval village 300 meters from the route of the wall on the north side and part of the south, where the watchtower with the Tower is preserved. Built in the thirteenth century with circular plan, the tower has five floors and is topped by a crenellated roof, once dedicated to monitoring and defense of the town. In the central part of the wall’s Basilica St. Mary’s Church, Romanesque to Gothic transition, it is one of the most important examples of Gothic Asturian rises. The temple was begun in the thirteenth century and was funded through a tax paid by all llaniscos, hence their property corresponds to the town of Llanes and not the clergy, as usual. In its interior the altarpiece, work of the early Renaissance.

Next to the church, in the old Palacio de Posada Herrera, typical house of the late sixteenth and early eighteenth century, are located the House of Culture and Tourism Office. Other sights are the Palace of Gastañaga, originally from the fourteenth century and one of the few examples of medieval palace architecture; the House of Juan Pariente, the oldest of the population, where that slept Carlos V in 1517; the House of Cercáu not visitable Renaissance palace complex, which was commissioned by the inquisitor and bishop Pedro Junca Posada; and the Convent of Augustinian Recollect, facade of the seventeenth century, which has been remodeled and converted into the Hotel Don Paco. 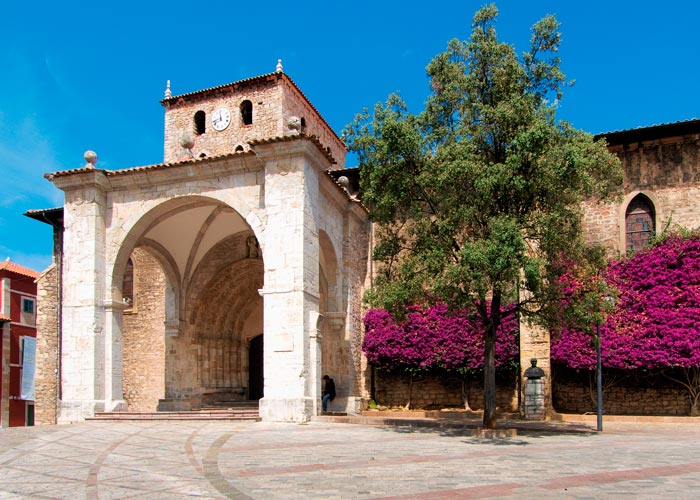 The villa is one of the towns with more parties He held five Asturias between late July and early September- This, coupled with its good selection of shops and traditional restaurants as the drinking area is lively, make it an essential point of the Asturian summer. In Llanes, and throughout Asturias and mainly in rural areas, it is spoken besides Spanish, Asturian or Bable, with certain peculiarities due to its eastern situation.