Although it may seem to us now to be a majestic, impressive, even breathtaking work, the truth is that the aqueduct of Segovia was conceived for practical purposes. We do not wish to be misunderstood either. Of course, Romans were aware of their abilities and the monuments they were leaving along their way. But, especially, what they expected from what we now call a wonder, was that it should be useful. They expected that it would serve to ensure that inhabitants of this ancient Roman city could have water at their disposal.

The word ‘aqueduct‘, if you have ever wondered, comes from the union of two Latin words: aqua, water, and ducere, to lead. They couldn’t have been more specific in their intentions. They could never have imagined that this work would end up as a UNESCO World Heritage Site. They would never have imagined it because, after all, there was no such thing as UNESCO or World Heritage Sites, but they were surely proud of this work just as well. 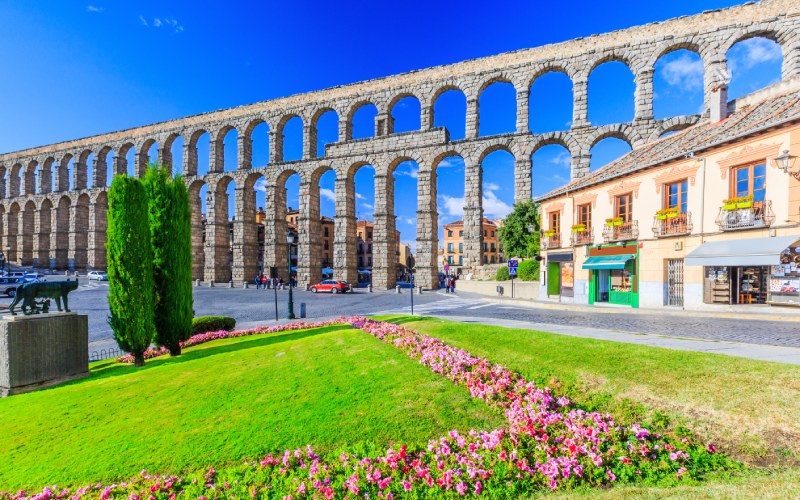 We must insist on the practical purposes that it had, because it is necessary to do so. Back in the 2nd century A.D., Segovia was a Roman city full of hills, slopes and had a road to the Guadarrama mountain of more than 15 kilometers. As it is today, but less Roman than in the past. Its inhabitants had to walk this road every day to get water from what is now the Fuenfría spring. Every day, 15 kilometers. So, when these settlers discovered the benefits of the aqueducts, they had no doubts about it. Why walk a lot every day to look for water when that water can come to you? This is why it was important, because it was the official water supplier of the city.

How did the history of the aqueduct begin? 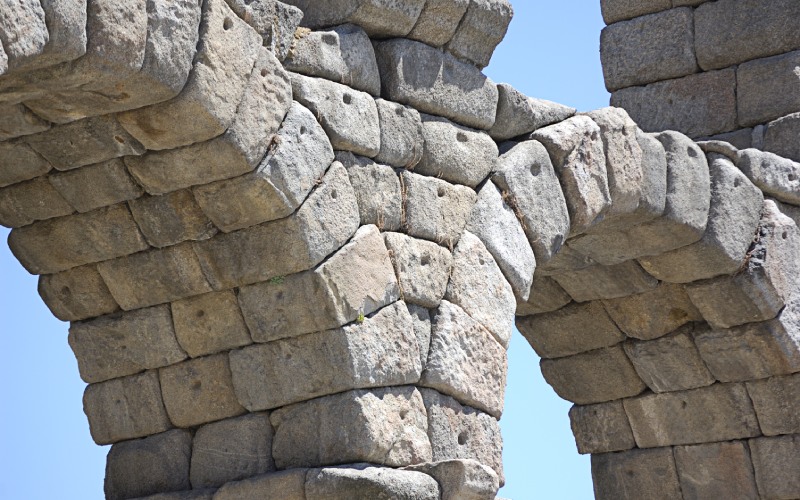 Details of the aqueduct of Segovia | Shutterstock

Until relatively recently, the Roman aqueduct was considered to be older than it is known to be today. The latest studies on the materials used allow us to date its construction to the beginning of the 2nd century. Either during the last years of Trajan’s reign (98-117 A.D.), which brought glory to the empire, or during the first years of Hadrian’s reign (117-138 A.D.), who was able to live up to his predecessor. This splendor can be felt in each of the 167 arches that make up the visible part of the aqueduct of Segovia.

167 arches built with 120 columns, with material extracted from the Guadarrama mountain. These stone blocks are joined together without any mortar, supported by a perfect study of the thrust forces that still amazes us today. And wonders.

167 seemingly impossible arches that reach a height of 30 meters at their highest point: the very center of the city of Segovia. In the past, this 15-kilometre path was mostly underground. Even today you can still visit the exact spot where Romans began this great work. Considering its singularities, its dimensions and this central point that rises up in the old town, one could almost believe that it is the work of the devil, as an old legend says. 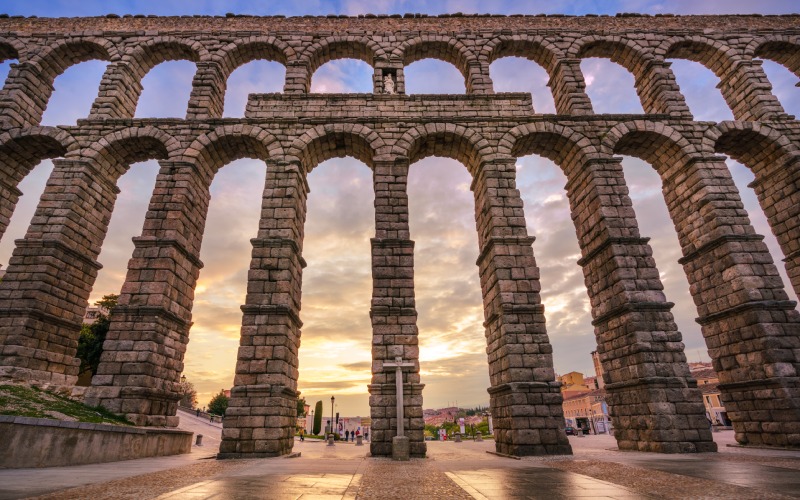 At its highest point, the aqueduct of Segovia reaches almost 30 meters | Shutterstock

Declared a World Heritage Site by UNESCO in 1985, the aqueduct is now the most representative and recognizable hallmark of Segovia. It has obviously lost its practical function. People from Segovia do not need to reach the sierra, nor do they need the sierra to reach them, in order to ingest the necessary daily quantities of water. In any case, it wouldn’t cross anyone’s mind to destroy this monument just because it has lost its usefulness. These wonders are wonders, apart from their actual purpose, which is simply to amaze us. And also, to show, or remind us, who was there before.

Therefore, the aqueduct of Segovia has remained untouched for centuries. It is on its way to twenty. It has, however, been cared for. By the end of the last century, more than 15 columns had been intervened to prevent its deterioration. Now, the traffic of vehicles around it is not allowed, and the protection zone of the monument has been extended recently. It seems eternal to us, because it has always been there, because it has always been like this, but it must be looked after. 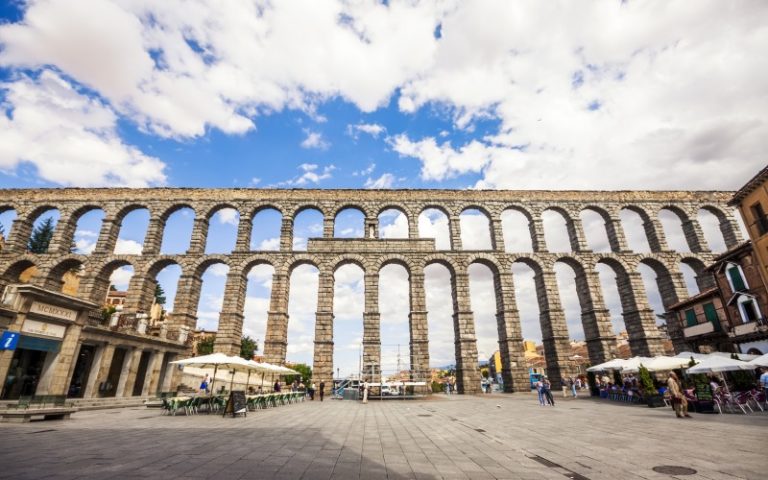 Also, it seems eternal to us because we feel helpless under its arches, before its enormous size, believing for a moment that it couldn’t have been the work of man. That is why it is a wonder. And because of the harmony with which it relates to the rest of a city that has preserved its past. It is at the epicenter of the city, and almost seems like just another element, but it is not. You understand that it’s not when you keep noticing it in the distance as you walk through the old town. You understand that it is not when you come face to face with it and you feel tiny.

The aqueduct of Segovia is a wonder from its very conception. It is because of its construction, of extreme complexity for its time, of excellent execution. It is because it also represents a golden period in the history of the Roman Empire. And it is because, quite simply, that is how you feel. That’s how you think about it. You see it and you think ‘what a wonder’.