The path that traces the river Noguera-Ribagorçana has attractions of almost every type imaginable on its journey through the Montsec mountain range. Since its waters were dammed in the middle of the 20th century, it has defined the border between Huesca and Lleida. In its high ravines, impossible hermitages hang on to the stone, while vertiginous passages between the banks trace impressive hiking routes. Although the Mont-Rebei gorge is its best known natural enclave, there is another one that is even more striking. This is the little known Chinese Great Wall of Finestres. 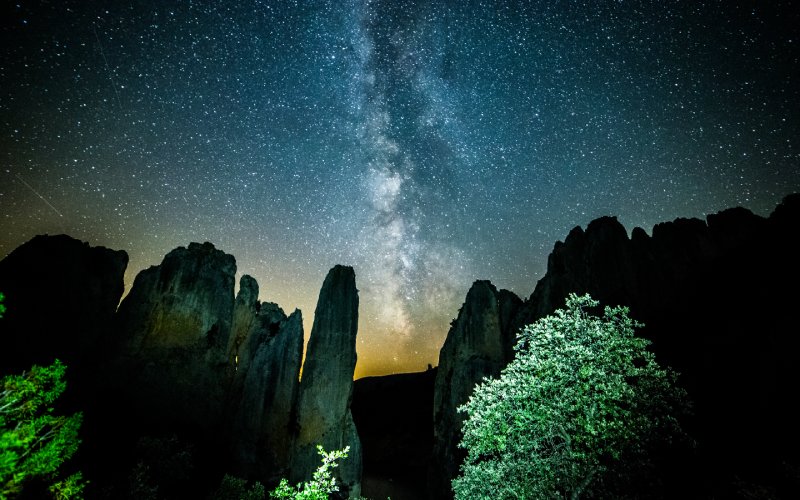 Nocturnal view of the Chinese Great Wall of Finestres. | Shutterstock

Stone teeth coming out of the actual mountain

Also called Roques de la Villa, the Great Wall of China in Finestres received its curious name because of its appearance. It extends for about 500 meters and rises up to dozens of them. Its aspect of a walled enclosure is totally recognizable. A natural feature that created a traditional natural border between Huesca and Catalonia. At the same time, it is part of the enormous Canelles reservoir, which leaves behind sections reminiscent of Malaga‘s Caminito del Rey to Mallorca‘s Gorg Blau.

A whim of plate tectonics is responsible for this space. It is believed that at first the large stone walls were in a more horizontal position. However, telluric movements led them to rise. The effect of the erosion, which was very pronounced in the whole area, would end up generating two almost perfect parallel lines of serrated teeth. That is precisely where another of his nicknames comes from, Dents de Finestres. 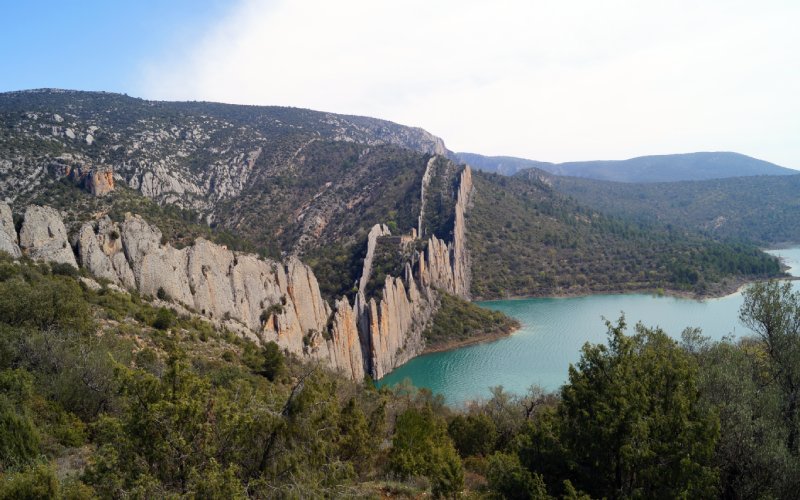 Luckily, neither war nor engineering affected the ensemble. That is despite the fact that their “guard tour” hosted a medieval castle. More recently, its solid rocks act as a containment for the Canelles reservoir. The jagged undulation seems to be well consolidated and stable. Therefore, it is predicted that it will remain part of the landscape of this frontier land for a long time. 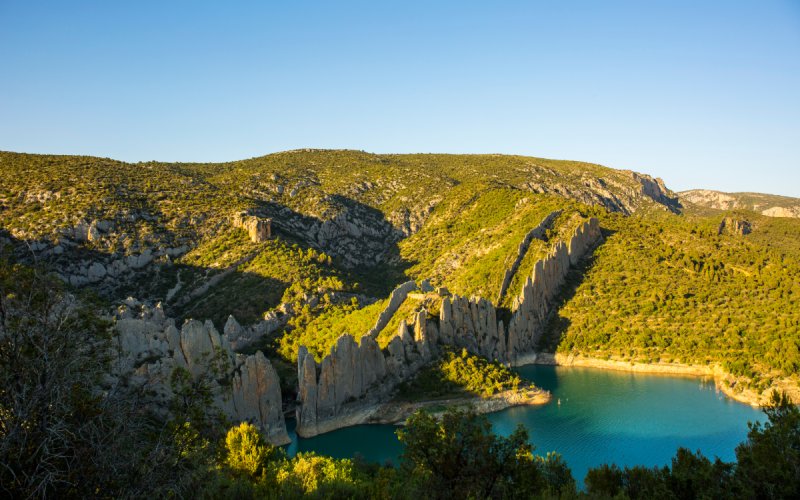 As it happened with a lot of villages in this part of the Ribagorza, Canelles took the local economy with it. An eminently agricultural area, the flooding of the farming areas led to the abandonment of a myriad of villages. Among them were Finestras or Finestres. It is still visited by old neighbours or their offspring. Without the spectacularity of places like Turruncún in La Rioja, it has the nostalgic aura and a certain beauty that the unpopulated enclaves transmit.

What remains of the church of Santa María, with its belfry on top, stands out. It is precisely its temples that best speak of the town’s antiquity. From the Modern Age are the mentioned building and the hermitage of San Marcos. Meanwhile, the ruins of San Vicente are located in the same Finestras Chinese Wall.

Part of a medieval castle, only portions of its structure survive. You can still see sections of its facade and apse. In this one its vault stands out. It dates from the 12th century and is perfectly adapted to the difficult terrain in which it is located. In this sense it reminds us of Santa Quiteria and San Bonifacio or Mare de Déu de la Pertusa. Located a little further up the river, they fly over the exit of the Mont-Rebei gorge as funambulists. This taste for strange locations extends to San Vicente.

The small temple was part of a fortified complex called the castle of As Finestras. Initially built by the Arabs, it was an almost impossible enclave to take. It is worth remembering that at that time the Noguera-Ribagorzana gorges were more imposing, due to the fact that the water was not dammed. Thus, the height of the fortress was much greater. Time led to the ruin of the fortress, but the foundations and some walls survive. The views from this place are impressive. 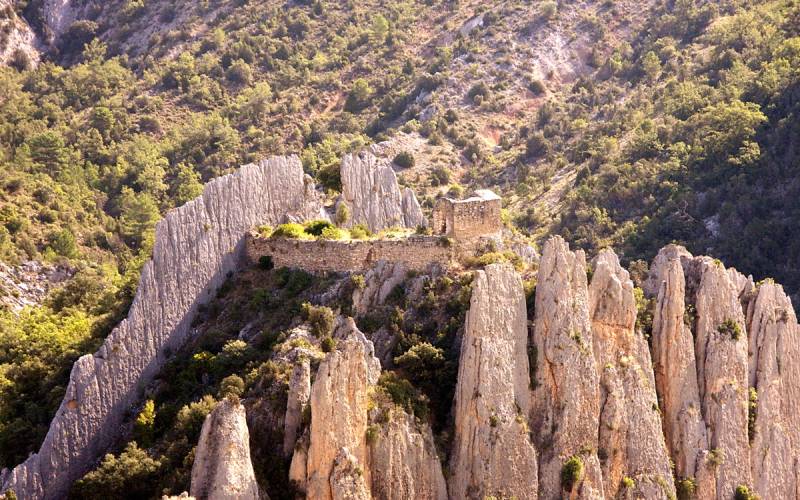 Rute to the Chinese Great Wall in Finestres

Luckily it is possible to visit the San Vicente hermitage and the interior of the Roques de la Villa. They form a pleasant and simple hiking route. It is only about three kilometers from the village. Therefore one morning is enough to reach the viewpoint and return. The ascent to the formation is facilitated by a kind of staircase. In any case, you should pay attention, despite being easy to use. 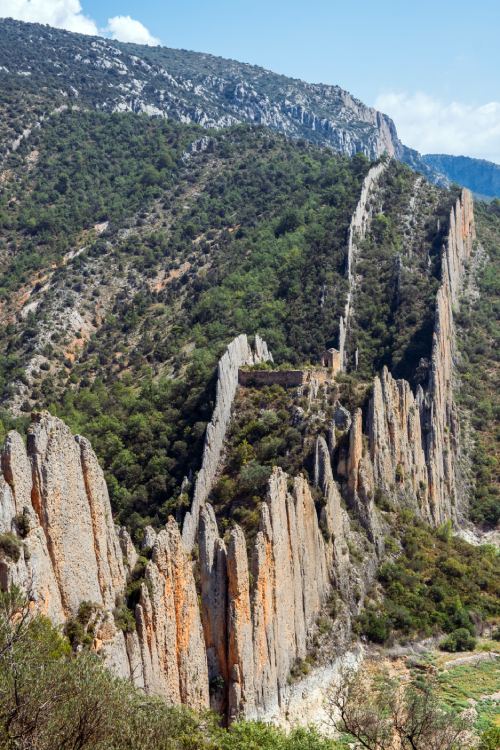 Side view of the Roques de la Villa. | Shutterstock

Taking the old town centre as a reference, two signs show the way to the hermitages. It is advisable to make the short journey to the San Marcos hermitage. It is still in use and is located next to a really remarkable viewpoint. From there it is possible to go back to the small temple and head for San Vicente and the geological formation that contains it.

Diffuse, the path goes through the Sabinós ravine to the Roques de la Villa. The view is really spectacular from the bottom, sometimes flooded with water. Once up there, once again the views are unbeatable. Another way of admiring the Finestras Chinese Wall is from the reservoir itself. Given how common it is to practice active tourism, it is easy to get a canoe. Thus, you can combine the view of the teeth from the bottom with crossing the gorge of Mont-Rebei.