During the Roman rule of Hispania it played an important role for both republic and empire. From the 2nd Punic War until the invasion of the barbarians it evolved and became fully integrated into the Roman state. Emperors, intellectuals and renowned military men were born in the peninsula. The wealth that the territory possessed allowed for the emergence of cities already abandoned, such as Cáparra or Itálica, and luxurious dwellings, today ancient ruins. The village of Noheda, close to the provincial capital, belongs to the latter group. A place that keeps a mosaic practically unique. 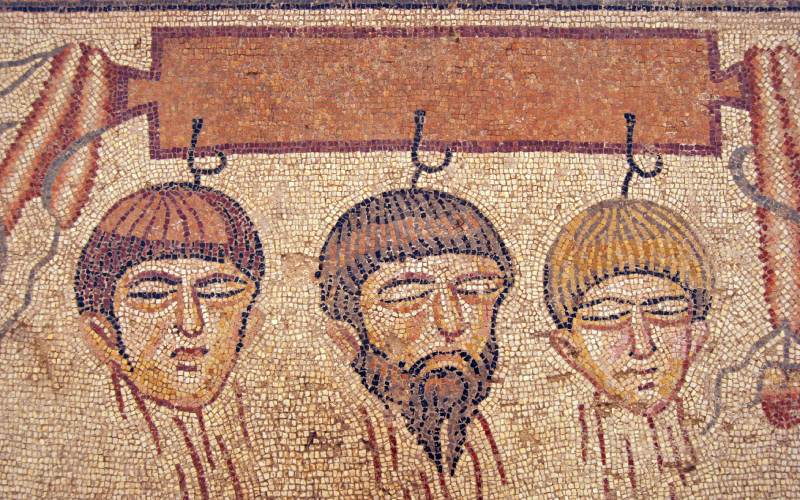 Detail of the plot of Pelops and Hippodamia in the Roman mosaic of Noheda. | Consejeria de Cultura de Castilla-La Mancha

Throughout Spain, there are many sites of Roman villas scattered throughout the country. Olmeda (Saldaña) in Palencia, Puras in Valladolid, Camarzana de Tera in Zamora… In the case of Noheda, a town in Cuenca associated with Villar de Domingo García, it is a complex from the end of the Empire. Thus, it is believed that it rose in a period that can go from III to V AD. It controlled a large area around it, as evidenced by the scattered remains found.

The villas of this period were environments usually associated with the aristocracy. During the 3rd century a great political and civil crisis took place in the empire that led to a remarkable disconnection between cities and the agricultural environment. In this way the landowners increased their power outside of once much more powerful cities such as Augusta Emerita (Merida) or Tarraco (Tarragona).

The magnificence of the findings in the Roman villa of Olmeda makes it clear that its owner was very rich. It seems that there was evidence that there were ruins in the place already in the Modern Age. However, the scientific work started at the end of the 19th century. Descriptions and small findings followed one another. Thus, in the 1960s it was claimed that it was a mansio. These complexes were located on the roads every few miles and served as an inn and official post house. There are great examples of this in Extremadura, around the Vía de la Plata. 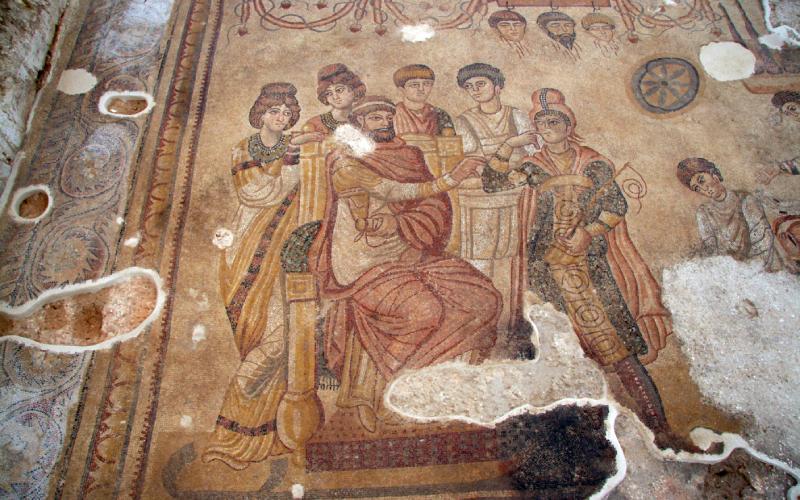 Part of the myth of Pelops and Hippodamia in the Noheda Mosaic. | Consejeria de Cultura de Castilla-La Mancha

In 1984, fate decided that while the owners were working on the property, they would find part of the mosaic. A slow process led to an extensive excavation in 2005. As a result, one of the largest Roman figurative mosaics in existence has been brought to light. It currently offers guided tours and can be seen. In this way it is a major cultural landmark in Cuenca, next to the Ciudad Encantada, Segóbriga or the lagoons of its mountain range.

The enormous Roman mosaic of Noheda

More than 230 square meters is the space occupied by the mosaic of the Roman villa of Noheda. That is a good part of the room of about 14 by 18 meters that contains it, which has about 300 square meters of surface. A major work developed with a careful technique. The room is the triclinium and is known as the triabsiada or tricora room. This comes from the fact that it has three exedras or apses, semi-circular extensions that were used for meeting and sitting. 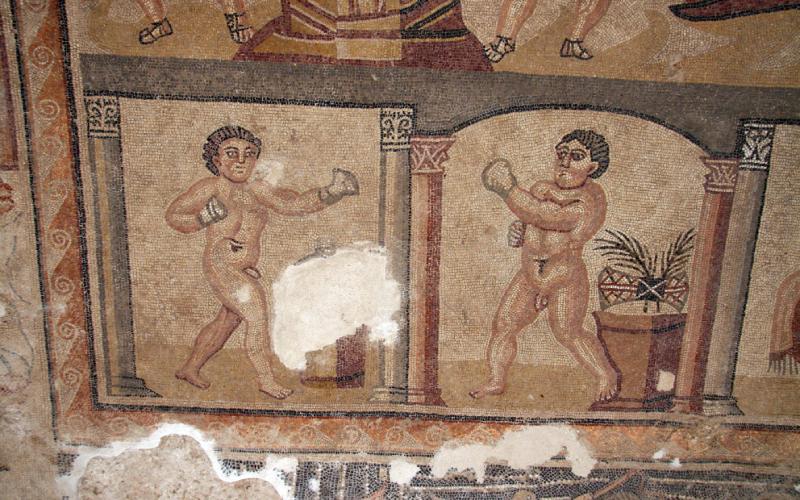 The figurative display is huge. There are six main sectors on the floor of this main room. The central one, damaged, shows elements associated with the sea. Two others, on the sides, look very similar and are considered to reflect theatre companies. Underneath this there are other motifs, such as pugilists. The missing terna is the most impressive and has mythological scenes as protagonists. 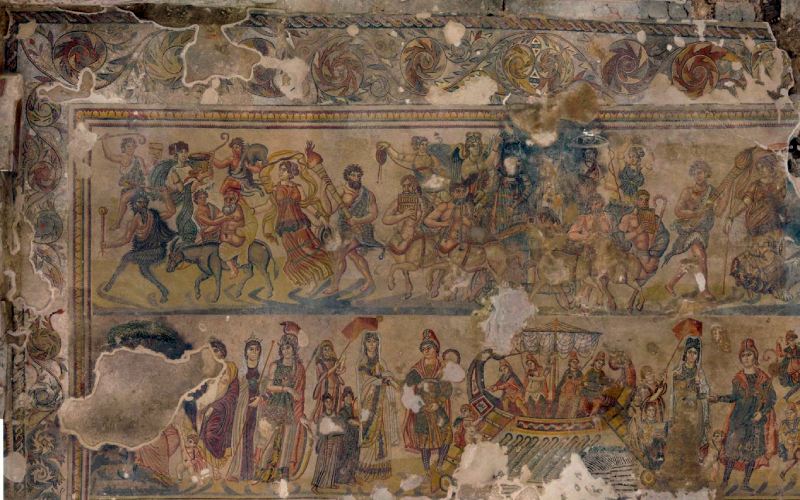 A so-called “Dionysian cortege” was formed at the top. It is a continuation of the Hellenistic tradition related to Dionysus, Bacchus for the Romans. God of wine, fertility and theatre, he was worshipped through orgiastic frenzies that are at the origin of Greek theatrical performances. The mythical cortege performed together with satyrs and maenads, these his female followers, was complemented with mortal participants sometimes. This is what is represented in Noheda. 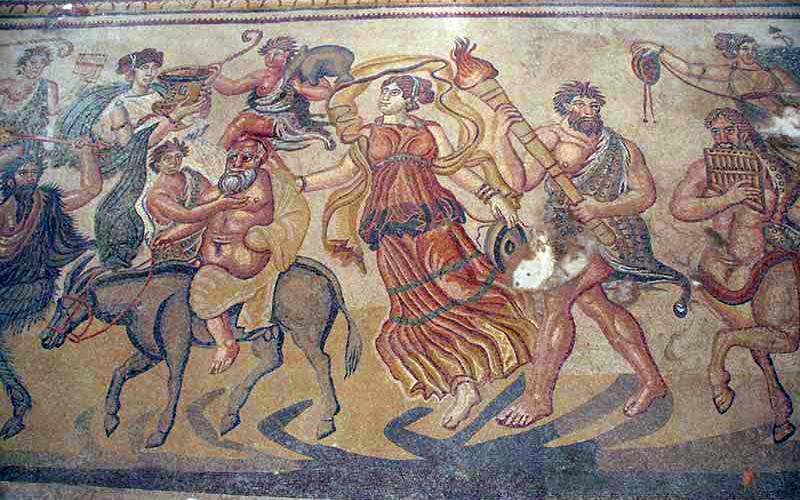 Detail of the Dionysian plot of the Noheda mosaic. | Diputación de Cuenca

Under this figure is part of the history of Paris. It is about his trial and the subsequent kidnapping that originated the mythical Trojan War. The first event consisted of a competition between Hera, Aphrodite and Athena to find out who was the most beautiful. In the process Zeus appointed the Trojan prince as the elector and the goddess of beauty came out victorious by promising him the love of the most beautiful woman there was. She was, of course, Helen, whom he abducted, starting the most famous conflict in Greek literature. 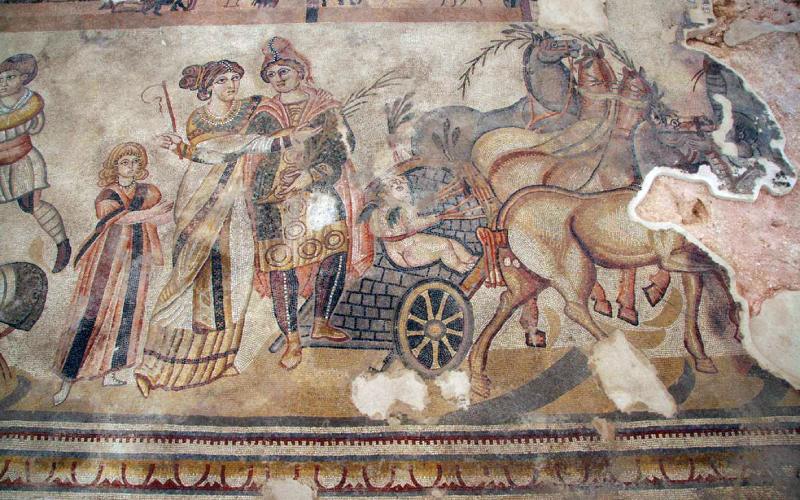 Part of the myth of Pelops in the Roman mosaic of Noheda. | Consejeria de Cultura de Castilla-La Mancha

The last of the scenes is the myth of Pelops, hero and lover of Poseidon, and Hippodamia. The young man is confronted in a horse race by the father of his beloved, the Greek monarch Enomaeus. Various tricks allowed him to win. After that he sired two sons, one of whom mythology places as the father or direct ancestor of Agamemnon and Menelaus.

Other elements of the Roman villa of Noheda

There are three sectors discovered so far in this place. One is the residence, where the previously described mosaic is located. In rooms connected to the central hall there are different kinds of painting works. Besides, some marble and sculptural traces have been found. On the other hand, there is the Pars Rustica, part of the agrarian complex itself. It was the segment of this that was dedicated to housing the workers. Only parts of the foundations and remains of the walls remain. The continuous ploughing work that the site has suffered has caused it to be very deteriorated. 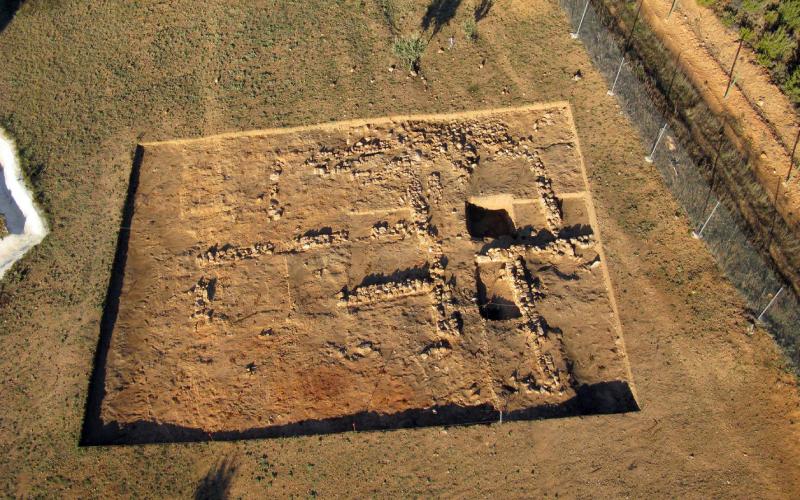 Finally there is the so-called Balneum. As its name suggests, it is a thermal type complex. Of great amplitude, it is possible to see remains of the rooms that composed it. Its entrance, the changing rooms or vestiges of bathing rooms are some of its elements. 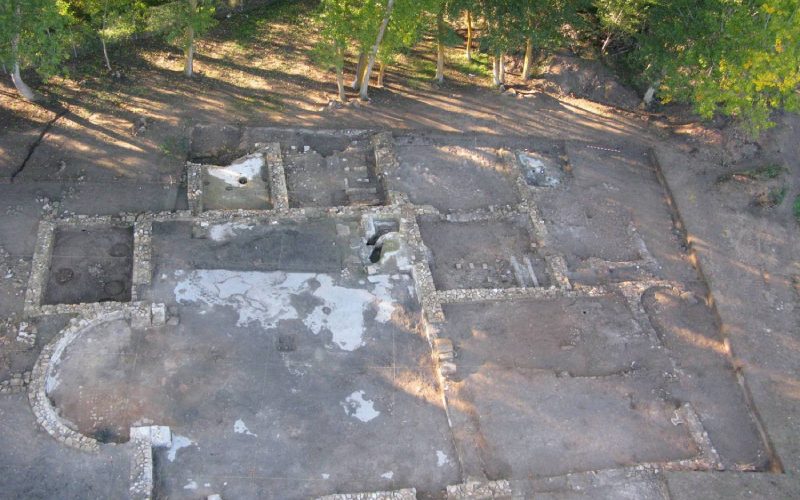 Guided tours to this lost corner are only offered on Fridays, Saturdays, Sundays and holidays at closed hours. They cost barely three euros. Meanwhile, all other days except Mondays are saved for group visits. Reservations are mandatory. Furthermore, in Villar de Domingo García there is a remarkable visitors’ centre with additional information about the Roman villa of Noheda.