Itálica. The city of the wealthy Italians

In a village very close to Seville is located one of the great Roman sites in Spain. The place once had an oustanding city that became the cradle of emperors. The continuous research work is combined with cultural activities that remind us of its past.

The tour of what to see in Itálica and Santiponce can take three hours. To the aura of antiquity that the ruins give, we can add the typicality of the town itself. The rest of the trip can be dedicated to Seville, both its old town and the area of Plaza de España and Triana.

At the beginning of the 4th century B.C., in the current Santiponce, there was an indigenous settlement. It is believed that it had a great influence on the upper part of the Aljarafe, on the west bank of the Betis River. It was located halfway between the also Turdetan Hispalis (Seville) and Ilipa (Alcalá del Río). Itálica was also close to the mining routes located in the north of the current provinces of Seville and Huelva.

The Republic of Rome founded a colony, named Itálica, in 206 BC. Scipio the African was responsible for it and created it to give shelter to his veterans. Its relevance was great almost from the beginning. It had a strong activity until the 4th century, when it suffered a strong decline.

Visigoth king Leovigild ordered the restoration of the walls of Italica in the year 583. The Muslims would give the area its own toponym. The royal abandonment of the city seems to have taken place at the beginning of the 12th century, when Christian sources speak of a barren place called Campos de Itálica or Sevilla la Vieja.

Since the 16th century, historiography has been aware of the importance of Itálica as the historic centre of western Andalusia. The memory of this city remained in the collective memory for a long time. This is due to the relationship of the place with three Roman emperors: Trajan, Hadrian and Theodosius. However, the ruins were spoliated for a long time to take advantage of its stone resources.

In 1740, the City Hall of Seville ordered to demolish the walls of the amphitheatre in order to create a dam on the Guadalquivir. Later, in 1796, areas of the primitive vetus urbs were blown up to build the new Camino Real de Extremadura. All this area of Itálica is now under the old town of Santiponce. 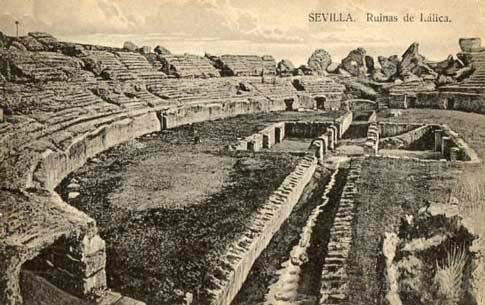 The protection of the site of Itálica Santiponce began in 1810. At that time, the administrators of the government of Jose I decided to preserve the remains. To do so, they opened an annual budget line for excavations.

By Royal Order of December 13, 1912, Itálica was declared a National Monument. However, it was not until the publication of a decree by the Junta de Andalucía in 2001 that the archaeological zone was clearly delimited. From that moment on it has enjoyed effective protection.

What to see in Itálica-Santiponce

The Itálica of the Emperor Hadrian

Much of the Roman site is buried under Santiponce. For this reason, the extension that was made in the time of the Emperor Hadrian constitutes most of the visible remains. The streets you can see in Itálica are arranged on the sewer network of the town. The existence of a complex system of sewers in an urban extension is a proof of its importance inside Rome.

Surface devoted to road traffic is covered with big polygonal slabs. In addition, it is adapted to the slopes of the undulating local terrain. Its porticoed sidewalks smooth out the unevennesses thanks to the use of staggered surfaces. Beyond the nova urbs there is a series of buildings and monuments of notable importance. The walls, the amphitheatre, the theatre, the so-called temple of Trajan (Traianeum), the so-called “major” baths and some houses stand out.

The Walls of Itálica seem to stand on a perimeter that was defined during the pre-Roman period. However, their definitive rise dates from the middle of the 1st century b.C. The maximum perimeter was more than 3 000 meters, with an average thickness of 1,5 meters. There are visible remains in two points of the Archaeological Site. On the one hand, a Tower from Augustus age (27 b.C. – year 14), at the theater area, close to the rows. On the other, a canvas from Adrianus age (years 117-138) at the northern end of the city, close to the amphitheater.

Continuing with what we see in Itálica we arrive to its Amphitheater. It is considered the third most important in Roman Empire. Its huge dimensions and its capacity of 25.000 spectators give an idea of how it was in the past.

Theatre is another element to see in Itálica. It is located at the San Antonio Hill, at the west of the urban area of Santiponce. The whole takes advantage of the natural slope on Betis. It is believed that its use was extended until 5th century. The loss of population caused the building to start being filled in to even out the land. It was also used as a warehouse, farmyard, rubbish dump and even a cemetery. The Guadalquivir floods contributed to its deterioration. After several restorations, it now hosts the Itálica Theatre Festival.

There are two thermal complexes in Itálica, one in the old city and another in the new one. The first ones are popularly known as “Menores” or “de Trajano” and they rise in Santiponce. On the other hand, the second ones are called “Mayores” or “de la Reina Mora”.

As can be seen by its impressive infrastructure, Itálica was a city of high socioeconomic level. Thus, houses of rich men of the Roman senatorial class abounded. An example is the House of the Birds, of almost one thousand seven hundred square meters. It had a cistern, a hole dug in the ground to collect rainwater, of a considerable size. It also keeps an elaborated mosaic that gives name to the whole.

Another notable dwelling to see in Itálica is the Planetarium House, of over a thousand six hundred metres square. It occupies the western half of a block situated between the amphitheatre and the temple dedicated to Trajan. Its name is explained by its beautiful mosaic of gods identified with the planets and the days of the week. Other notable enclosures are the House of the Exedra, the House of the Rhodian Courtyard, the House of Neptune or the House of Hilas. 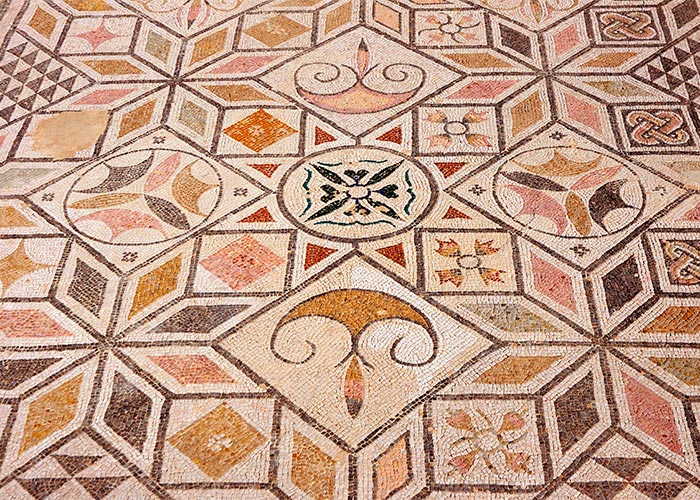 Finally, the visit to the archaeological site of Santiponce can be complemented by the Cotidiana vitae. This tourist, cultural and educational project aims to bring the daily life of the city’s inhabitants during the 2nd century AD closer to everyone.

The enclosure of the Archaeological Complex has a parking lot for visitors.