From the mountains to the coast, Asturias offers a variety of landscapes which in turn gives endless possibilities for enjoyment. Hence the versatility of its villages, places, beaches, routes and, of course, its cuisine. Something that is perfectly reflected in its cheeses. The hundred-year-old experience of the shepherds in the area has been combined with modern technology to provide high-quality products. However, there are also those who decide to follow tradition and continue using holes in the ground to ripen their products. Joining palate and geology, the Asturian cheese caves continue to give many joys. 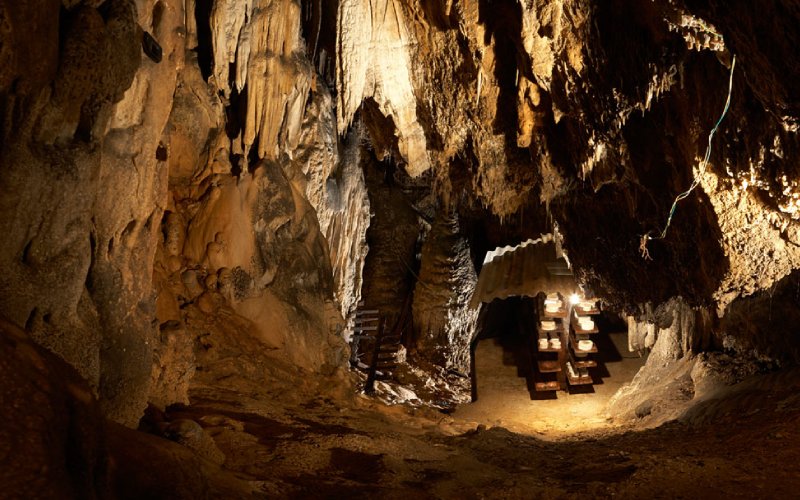 Interior view of a ripening cave in Cabrales. | D.O.P. Cabrales

One of the most famous connections between cheese and caves is undoubtedly that of Cabrales. With a Protected Designation of Origin, it is one of the blue cheeses par excellence of Asturias together with the next one, the Gamonéu. Strong, somewhat spicy and fragrant, its telluric component is essential. The holes where it ripens for a minimum of two months are in the Picos de Europa, in the council of Cabrales. Three enclaves of the Peñamellara Alta also are part of the P.D.O. It is precisely the humidity of its caves that allows this product to be as it is. It reaches 95% and the temperatures do not exceed 15 degrees nor go below eight. 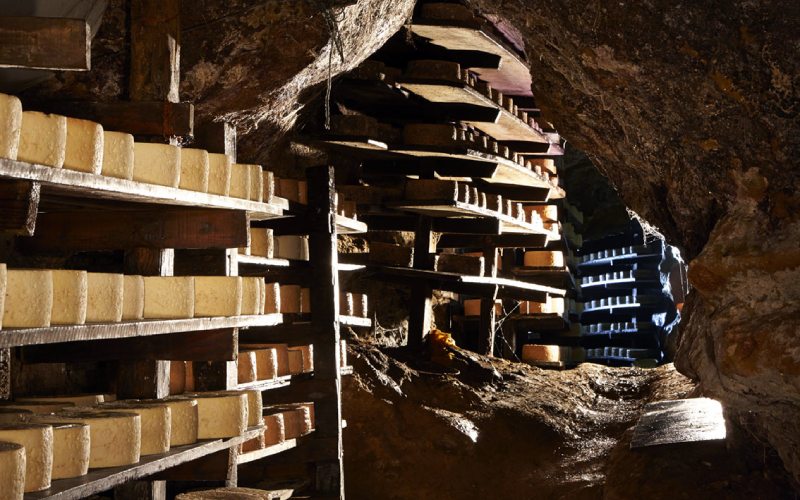 There are many caves scattered throughout the council that are dedicated to seeing the Cabrales ripen. However, the best ones are higher and the ones that look more to the north. This way, the ventilation optimizes the achievement of this Asturian delight. As it happens with pastures and other agricultural elements, its use is a matter of series and most of the times generational. Thus, the right to use these natural underground spaces to mature cheese, whether individual or communal, has been closely associated with inheritance and sagas. 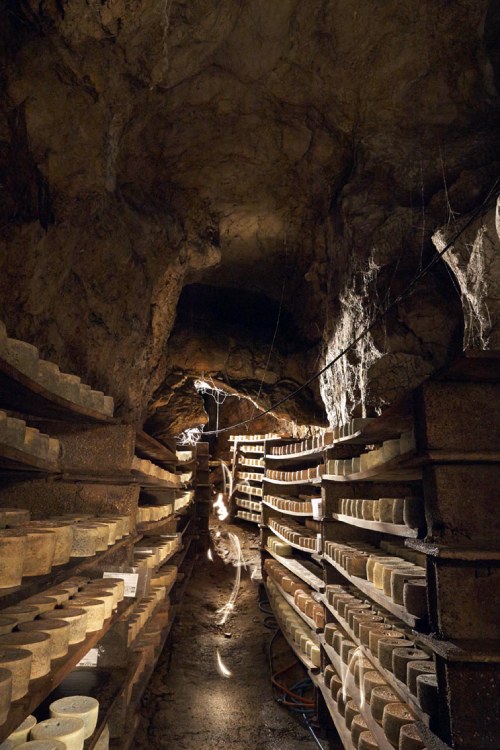 These cheese caves are therefore precious goods. The easiest way to get to know them is to go to the Cueva del Quesu in Arenas de Cabrales. Located in the district of Cares, this natural cave can be contemplated in a guided tour. Managed by the Cabrales Foundation, it allows you to see how it is made from start to finish. Another option is in the cheese factories that offer to enter their caves in a controlled way, like Maín in the village of Sotres. 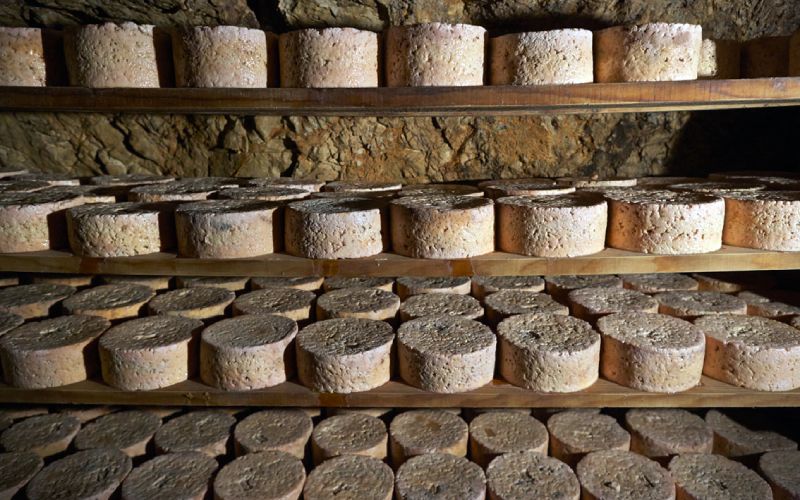 Another of the most famous Asturian cheeses. It also has the presence of the variants of the Penicillium fungus that provide the curious colouring and intensity to these products. In the case of Gamonéu PDO, it is smaller than its neighbour. It has a compact and softer appearance, what makes it different is the smoking it undergoes during its production. In this way it combines with the light spiciness. Its firm consistency but tending to melt is another sign.

Picos de Europa are once again the setting for the traditional caves where part of the Gamonéu is produced. It is in the councils of Onís and Cangas de Onís, near the Covadonga Mountain, where the producers are distributed. Here too, the custom of using natural underground spaces to “refine” the cheese is maintained. That is, to leave it in this protected and humid environment, normally for a month. In this way, the maturing process is completed until perfect pieces are obtained, in some cases reaching a weight of seven kilos. 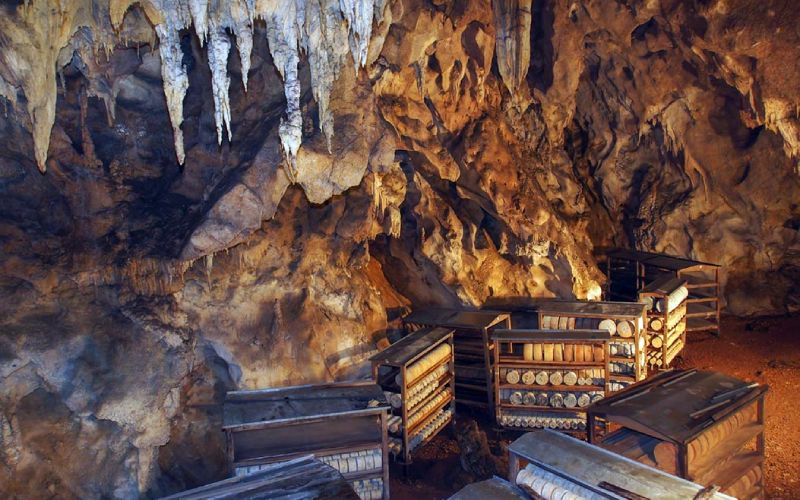 There are two varieties of Gamonéu, the Puerto and the Valle. The latter has the advantage of making more use of technology. Moreover, as the dairies are in low areas, they can produce all year round. Some even do without the caves. The former is more exclusive and totally traditional, performing the art of cheese making during spring and summer.

Cueva Oscura is one of the most famous caves where the Gamonéu is ripened. It is located in Avín and is shared by many producers. In the rest of the territory of Onís and Cangas there are holes that are often isolated in winter. Although access to them is complicated and can be attempted through requests to the dairies, the cheese trail has beautiful landmarks outside. The villages that give their name to the delicacy or the sheepfolds of Belbín or Soñín are spectacular destinations for walking and enjoying the Picos de Europa. 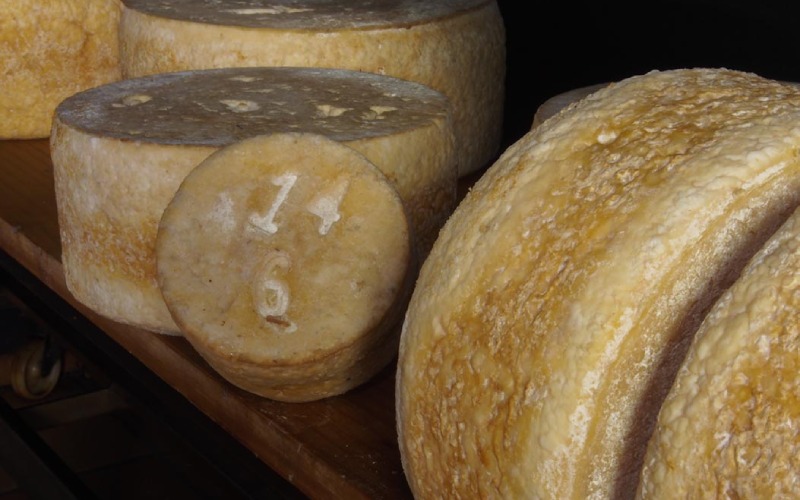 That the above examples were found in the Picos de Europa is no coincidence. The combination of altitude and a telluric environment made the caves in this area of Asturias perfect ripening environments for blue cheeses. Outside the PDO itself, it was common to use caves to let the cheeses ripen. However, the process of technifying this pastoral work has meant that on most occasions chambers have been chosen. It was also common, in the past, to use cellars under the cheese dairies themselves, which emulated the caves.

One example is located near the famous Cares Gorge and León. The powerful Pregondón cheese, pure goat’s milk. The traditional process used to make it is different from the main cheese reference of the place, the Beyos. Powerful and earthy, it combines the intensity of the milk with the fungal notes of the cave maturation. A unique delicacy that remains semi unknown to most. 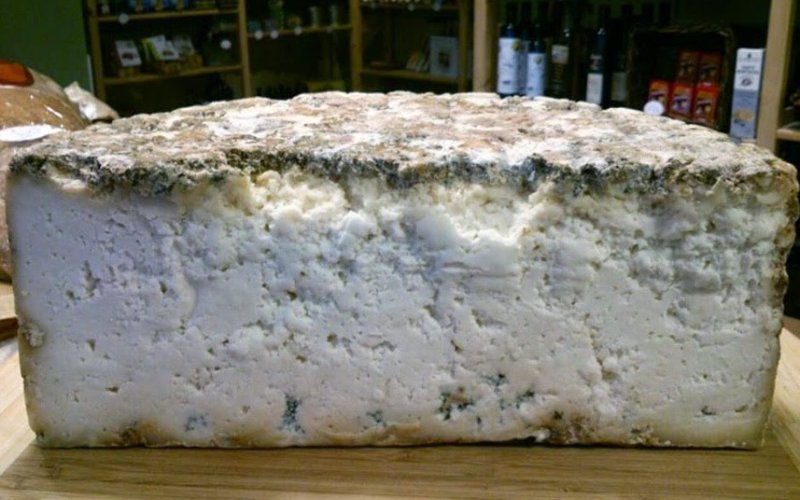 Cheeses with the essence of the cave

Although not matured in caves, other Asturian cheeses share the characteristics of these. For example, the two most outstanding varieties of La Peral, cheese from the council of Illas in the central part of Asturias. Products originated at the beginning of the 20th century, the one named after the producer is the most famous. A true marvel with blue veins and just the right touch of spiciness that has made its way as a serious competitor to the Cabrales and Gamonéu PDOs. The Peralzola, on the other hand, is another surprise as it shares its sibling’s process but is made from sheep’s milk. In both times they were matured in a specially equipped cellar, but today the process has been modernised. 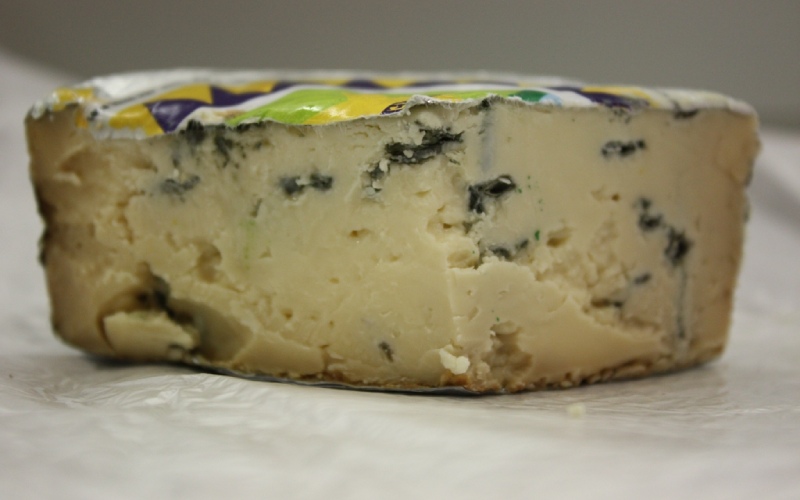 The Llonín Cave is less sharp. It takes place in Peñamellera Alta, council next to Cabrales. In this case it is a sort of Asturian Camembert, which even achieves the cave effect in its surface. A new alternative that takes advantage of what has been learned for generations by the shepherds of the place and France. Once again, the cave is in the essence of this product.