Summer is a long-awaited time for most people. Summer holidays have one of their favourite targets on the beaches. But, although the sea cools down, the sand not so much. The high temperatures and humidity, out of the water, usually make the atmosphere more like hell than a paradise. Something that not everyone can bear, especially when it is impossible to sleep at night. Fortunately, there are destinations that do not force you to melt and allow you to run away from the heat. Towns with a lot to see and do that also require you to put some cold clothes in your luggage, even if it is July. 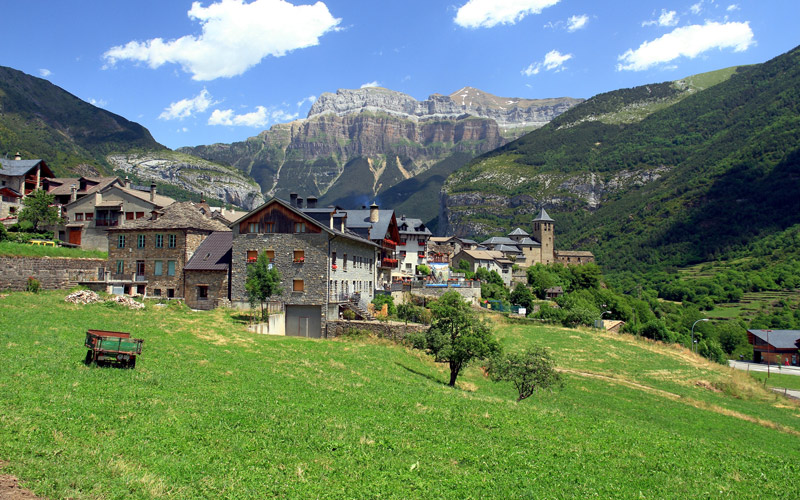 Still in the north, Torla is located in Huesca, in the middle of the Aragonese Pyrenees. It is one of the main gateways to the Ordesa y Monte Perdido Natural Park. Thus, it allows us to travel through the valley that gives its name to the space; as well as that of Broto. Therefore, it is an ideal place as a base for walking or cycling routes. Waterfalls, lakes, high peaks or beech forests are deployed in routes of remarkable variety, ranging from low to very high difficulties. At the same time, the town itself boasts a pleasant local architecture where its Romanesque church shines, which in its time also served as a fortress. In the surrounding area there are villages with great charm such as Fanlo or Broto. All this without getting over 22ºC of high average temperature and with a low one over 10ºC. 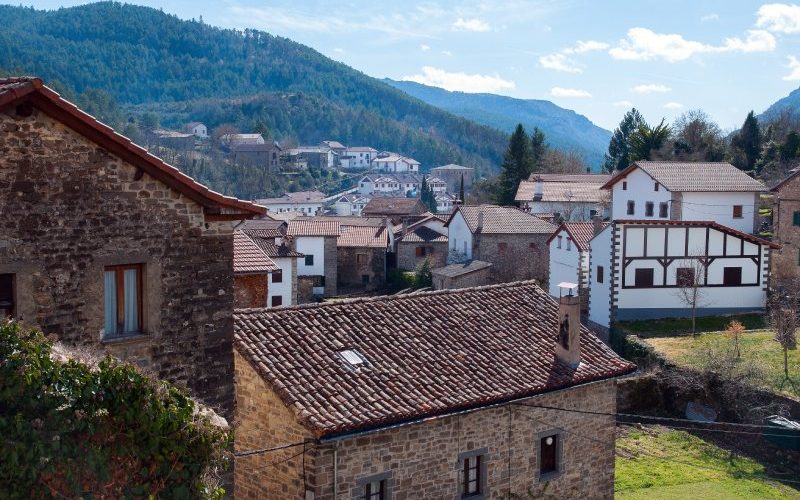 Almost the entire Roncal Valley is perfect for those who want to get away from the heat. Isaba, famous for its part in the Tribute of the Three Cows, stands out for its location between mountains and in the Belagua Valley. Close to the French border, therefore to the north, its temperature in August varies from 11ºC to 24ºC. This coolness is especially noticeable at night and, as in almost all of its list of partners, makes active tourism especially recommendable. The routes around the Belagua and Esca Rivers, which are created when the former merges with two other rivers, stand out. The church of San Cipriano stands out in its silhouette. It was built in the 15th century and has a powerful and elevated appearance. The minor basilica of Idoya, near the town centre, is also worth a visit. Sangüesa and Ochagavía are complements to this trip to Navarre. 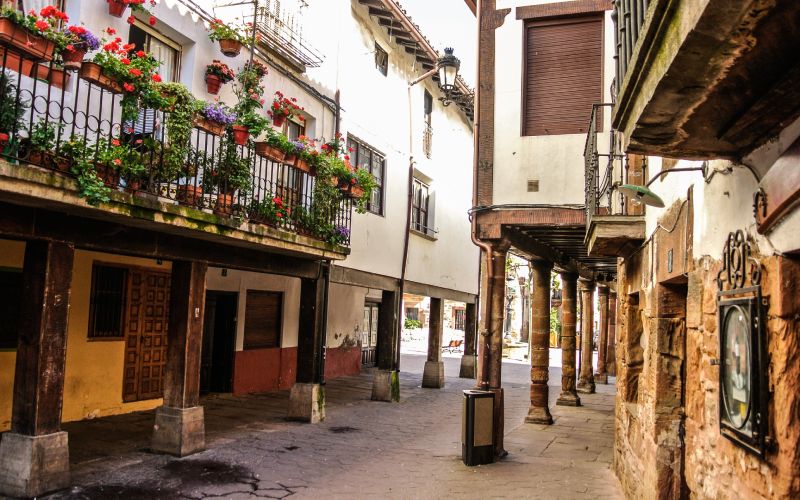 La Rioja also has its cool spot in Ezcaray, with summer temperature between 12ºC and 26ºC. It is located in a prone location, in the Sierra de la Demanda next to Burgos. These mountains offer excursions everywhere and even have a ski resort, Valdezcaray. To the north the Way to Santiago leaves its influence in towns such as Belorado, Villafranca Montes de Oca and Santo Domingo de la Calzada. Meanwhile, somewhat to the east is San Millán de la Cogolla with its extraordinary monastery. Nor should we ignore the town of Ezcaray itself. For example, it has the Royal Weaving Factory of Santa Bárbara, from the 18th century. It also contains a list of three temples to be seen: the church of Santa María la Mayor, the hermitage of Santa Bárbara and that of the Virgen de Allende. 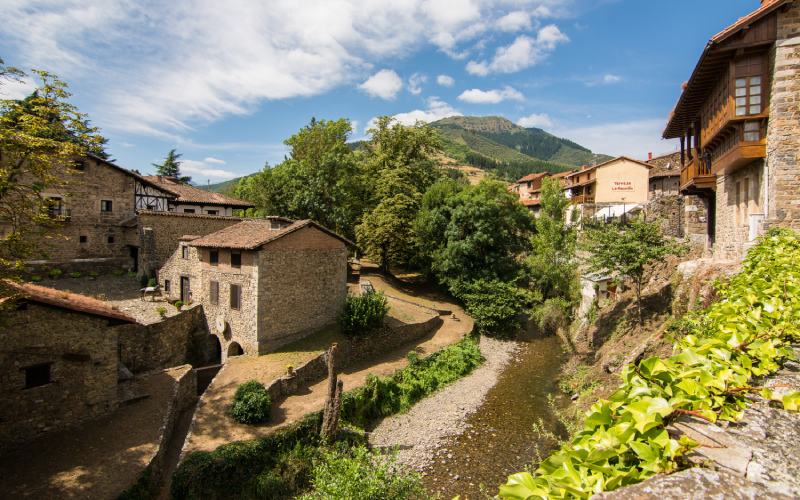 It should come as no surprise that the Picos de Europa in Cantabria appear in a review of cold places. In them there are many alternatives both to disappear and not suffer the heat. One of the most attractive is Potes, with only 26ºC high temperature in August and a little more than 10ºC low. It is a village of stone that forms an ensemble of great beauty in itself. It is also the capital of a spectacular region, Liébana. Such an environment has one of the few places in the world that has a jubilee year, of special symbolic significance. It is the monastery of Santo Toribio, where the largest recognized fragment of the Lignum Crucis is located. The Natural Park is full of very particular routes and locations. Fuente Dé, for example, has a cable car that leaves some of the best views of the territory. Furthermore, if you feel like going to the beach one day, San Vicente de la Barquera is very close by, as is the A-8. 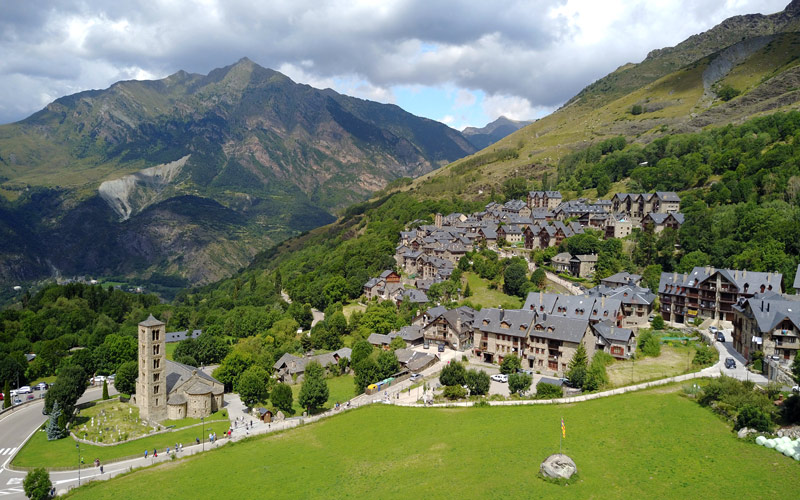 In Tahull heat is not a problem. | Shutterstock

The Natural Park of Aigüestortes i Estany de Sant Maurici is famous for maintaining pleasant temperatures in summer. Not in vain, it is one of the coolest places in the whole list; with average temperatures below 20 degrees in the summer. In the case of Tahull, the difference is only 6º between extremes. Therefore, it is neither cold nor hot. Besides enjoying the green and watery atmosphere of the park, this town is located in the Vall de Boí. The Romanesque heritage of the area has made it a World Heritage Site. One of the best justifications for this honour is a local church, Sant Climent, with some very lively medieval frescoes. 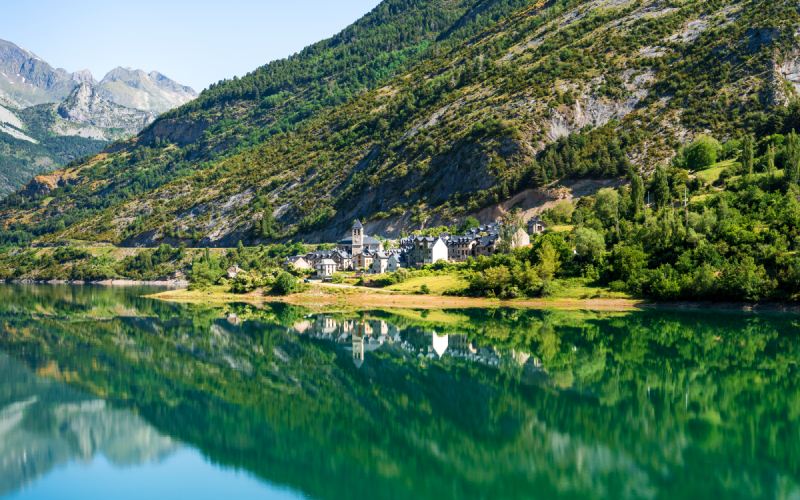 Lanuza reflected on the reservoir of the same name. | Shutterstock

When it is less than 10 degrees in the summer, the lack of heat is assured. This is what happens in Lanuza, in the middle of the Tena Valley. A brave town that was reborn after its forced abandonment when the reservoir to which it gives its name was built. Today it is a charming corner surrounded by water and rock. Its region extends around the river Gállego, with Sallent, Panticosa and Formigal as reference towns. On the river sides the peaks rise to great heights, hosting lakes and routes of great beauty on their slopes. Likewise, just beyond its entrance to the south, Biescas is another enclave worth visiting. 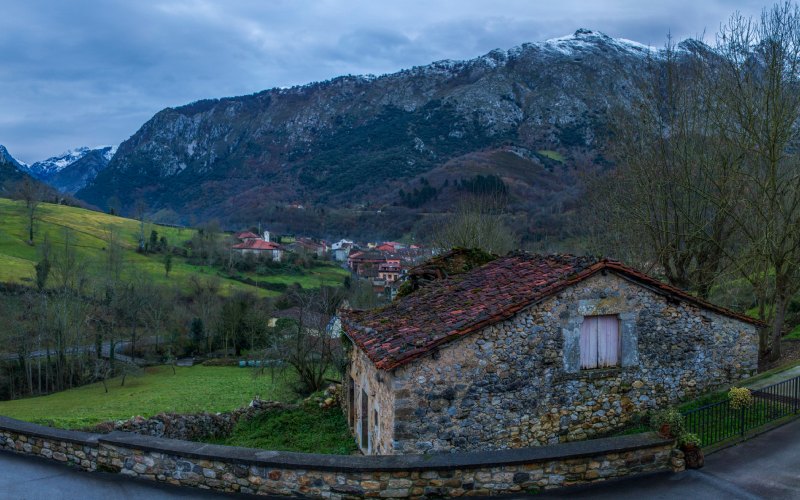 If Torla was an entrance to Ordesa, Arenas de Cabrales is an entrance to the Picos de Europa on its Asturian side. This town is undoubtedly known for its cheese tradition. In the caves of the area, a bluish delight, the Cabrales, is created. Luckily, the heat does not spoil the digestion of this overwhelming product, since during the day in August it barely reaches 25ºC and at night it remains a pleasant 15ºC. For the most demanding mountaineers the Naranjo de Bulnes environment offers highly interesting alternatives. Meanwhile, whoever wants an easy but ideal route to overcome vertigo has the Cares Gorge to the south, which crosses the border into the province of León.

Keeping the confluence of the Castro and the Tera, with a legendary lake nearby, Puebla de Sanabria is in the green area of Zamora. Both here and in the lake town of Galende it is easy to avoid suffocation. Although in comparison with other fresh villages the maximum temperatures seem somewhat high, 27 on average in August, they do not prevent you from taking advantage of the whole day. One alternative is to visit the medieval quarter of La Puebla, where a variant of the Vía de la Plata‘s Way to Santiago passes through. The most outstanding monuments are the castle of the Counts of Benavente and the church of Santa María del Azogue. Active tourism on the lake, taking advantage of the Jacobean route or practising water activities are also good options. 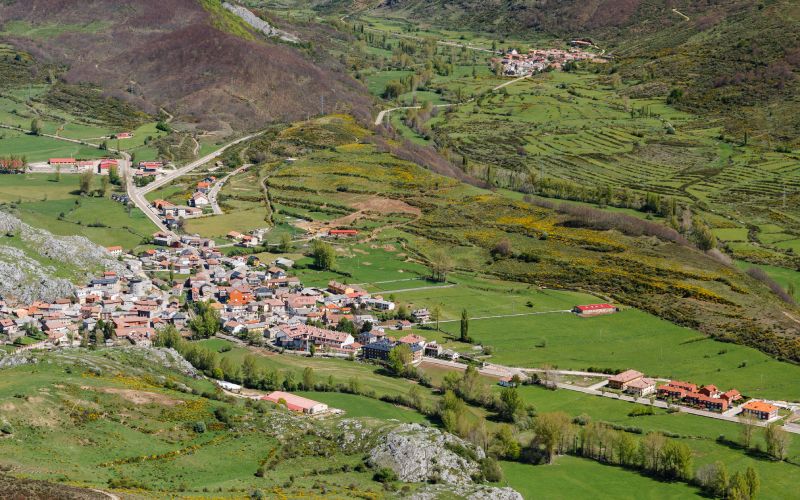 The port of San Isidro in León, which gives way to Asturias, is a classic in the list of cold summer places. That is why it is logical to recommend another Puebla, in this case Lillo. The average temperature in August is 23ºC high temperature and 10ºC low, so a jacket is a must for the night. There are several mountain lakes in the vicinity, such as the so-called Ausente. Therefore, hiking is one of the most likely alternatives to take advantage of the coolness. It is worth mentioning that the territory was crossed by several Roman roads. Likewise, transhumance and mining have left their mark on the municipality. The Porma reservoir is also next door and, next to it, the curious Museum of Wild Fauna of Valdehuesa. 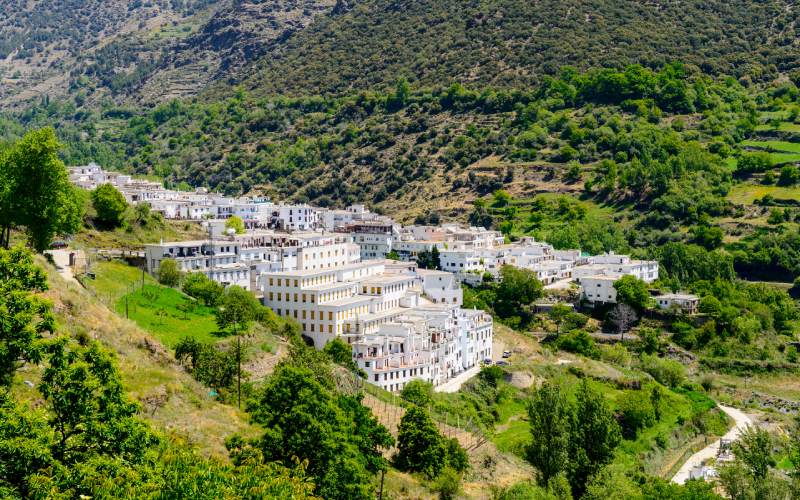 Considered the highest town in Granada, Trévelez is another place where you you can avoid the heat in Andalusia. It does not exceed 30ºC of high temperature in August, something bearable, but the low temperature is only 13ºC. Being on the southern slopes of Sierra Nevada, it is easy to go to the coast if you want to. La Rábita, Motril or Castell de Ferro allow this change to warmer air, although the A-7 allows you to move quickly along the Costa Tropical. At the same time, you can also choose to go to the old Nasrid capital, which guarantees the monumentality with the Alhambra at the head. If you want to continue in the mountains, the routes through them will be very interesting. 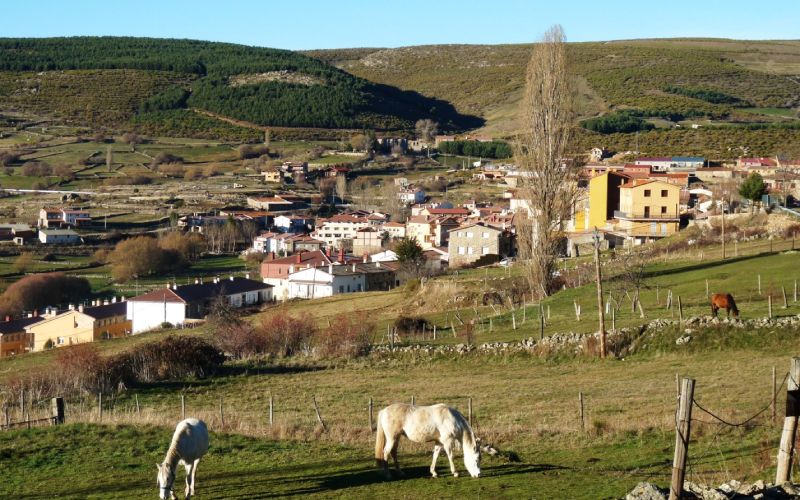 When the sun hits hardest in all of Spain, this village of Ávila, in the Sierra de Gredos, does not even reach 20º C on average. With maximums of just over 26º in August and minimums of around 11º; it allows you to get to know it both day and night. Close to the Tormes River, a better known nearby reference is El Barco de Ávila. However, the surroundings have interesting attractions, especially those focused on nature. For example, it has a natural swimming pool next to the Duke’s bridge. Several routes run through it, which can also be done on horseback. Meanwhile, on a heritage level, the sanctuary of Nuestra Señora del Espino, a Gothic-style cruise and a monument to the mountain goat are worthy of note.