Walking through a deep gorge is a good plan. If it is in an amazing natural environment, it is better. This is the Cares Trail, a small hiking route of about 24 kilometers round trip. It can be done in both directions, starting on the Asturian side at Puente Poncebos/Camarmeña or on the Leonese side at Caín. This path can be taken by both beginners and experts in mountaineering, taking always some minimum precautions. Nearby there are villages as isolated as Fuente Dé or as interesting as Arenas de Cabrales and Bulnes with its Naranjo, depending on which end you are. Both beginnings are separated by 100 kilometers by road.

The path of the Cares route is not too old. In ancient times it was almost inaccessible to anyone who was not a goat. However, at the beginning of the 20th century, it was decided to undertake a series of works that would allow this gorge of the Picos de Europa to be crossed. It was the electric company Viesgo who decided to create a channel around the waterway. The energy use of the rivers was a thriving business and the unevenness of the area made it have a lot of potential.

Thus, the first stage towards what is today the Cares Trail came with some very hard work. The number of workers was around half a thousand. The conditions were very dangerous due to the landslides and the great possibility of falling. In total, eleven men died. Finally, the canal was completed to guide the waters of the Cares, the Tejo and the Duje was discarded. The result was an ancient route. Carried out by hand, it was completed in the early 1920s.

For several years the locals used the path to go from Caín and Valdeón to Puente Poncebos/Camarmeña . They did so during the snow season, since it was the only possible alternative. It was still very dangerous, so the company decided to improve and expand it. It ran from 1945 and both spikes and dynamite were used. This time the work environment was more controlled. In the end, the Cares Trial was created, which is still being walked today.

Although the slopes that surround the path through the so-called divine gorge are enormous, the Cares Trail is quite bearable. It has no devastating climbs or descents. Thanks to this, it has gained enormous popularity, as it can be done by practically anyone. Although you can start from any end, in this case it will be calculated from Puente Poncebos. The outward journey covers 12 kilometres and the return journey another 12 kilometres.

Puente Poncebos can be easily reached by car, as can Posadas de Valdeón and Caín. At the beginning of the route comes the biggest difference in level of the day. Los Collaos. Although it is not excessive, it barely exceeds 300 metres, but if you are not used to hiking you should hold back. Most of the route is still ahead of you. Once you have taken on this little challenge, you will advance to the footbridge and the canal.

In summer this part is the most crowded. Especially when Caín is near, when it is time to cross from one side to the other the divine gorge itself. This is done through the bridges of Los Rebecos and El Bolín. The target village is really beautiful, with a spectacular background made up of the mountains of the Picos de Europa. After this it would be time to return to Puente Poncebos/Camarmeña.

Advice on how to do the Cares Trail

LDistance is the only real difficulty of the Cares Trail. Although for the more experienced hikers 24 kilometers is not much, for the beginners it can be quite a challenge. Be that as it may, there is an evident lack of significant slopes. This makes it one of the ideal routes for beginners in mountain hiking.

Likewise, the large number of tourists in summer may also cause some traffic jams, which can be solved with common sense and some patience. If you want to go more freely, the recommendation is to get up early in the high season. Wild goats are common and the best thing to do is to leave them alone.

As for the weather, in winter you have to be careful with it. In case of snow or strong wind, if you are not experienced, it is better to choose another route. Spring and autumn are usually the best seasons to walk this Asturian-Leonese path. There are less people and the climate is more contained than in winter. This is something that is shared with much longer routes such as the most travelled Ways to Santiago, for example the Northern or French Ways.

As there are no fences along the path, it is not a journey for those who are afraid of heights. Despite this, there is plenty of space to avoid being stuck on the edge of the cliff. Good walking shoes are enough to avoid slipping. Children can go without a problem as long as they are careful and do not run. The possibility of landslides exists but is controlled by the maintenance services. As for the backpack, you should carry enough water and, as on any hiking route, something to regain your strength quickly, such as nuts or chocolate. In case of rain, do not forget a poncho or raincoat.

In the surroundings of the route there are villages with good options to eat. As mentioned, Caín and Puente Poncebos/Camarmeña are separated by 100 kilometres by car, so it is advisable to stay and eat at the end where you have parked. For example, on the Asturias side there is Arena de Cabrales. On the León side, you can soon go to Riaño, famous for the reservoir that submerged its old part and one of the most beautiful in its autonomous community. However, below you will find some places in the main areas of the Cares Trail. 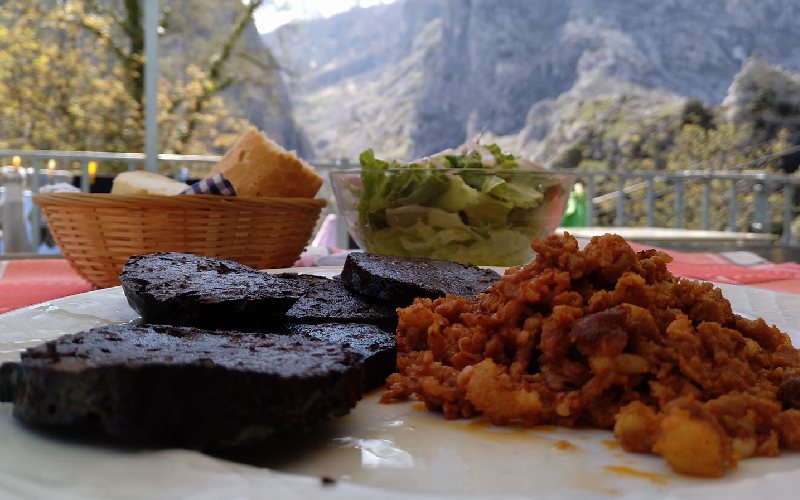 La Fuentina. | The place itself

This bar is very well known in the area of Cabrales where it belongs. It has very good prices, with combined dishes for less than ten euros for example. These are complemented by great views of the Naranjo de Bulnes and the Picos de Europa, to which it belongs. Its cheeses are excellent, as well as its meats, such as its sirloin. Of course, it also offers Asturian stews such as fabada. A complete option. 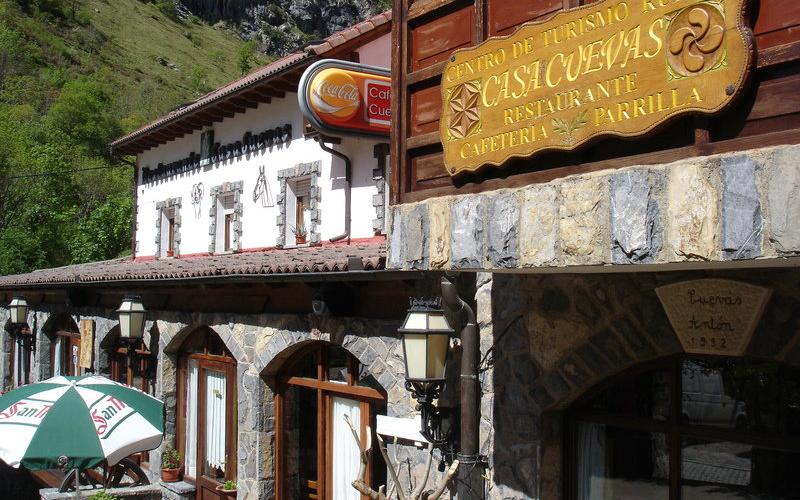 Casas Cuevas Restaurant. | The place itself

In this small town is this hotel-restaurant. It is cheap, with daily menus for just over ten euros every day. It also has a menu based especially on sausages, cheeses and meats typical of its mountainous environment. For example, roasted goat or lamb and various pieces of grilled meat. There are also combined dishes perfect for children.

A few kilometers from Caín is the actual start of the route, where there is another of the best places to eat on the Cares Trail. El Desván de Valdeón offers a menu with slightly more sophisticated dishes than the other alternatives but equally based on traditional cuisine. Surrounded by impressive nature, its price is contained and it costs around 25 euros. Once again, the carnivorous options are the most striking, although there are vegetarian possibilities.