Icon of the Reconquista

A narrow valley anticipates the spectacular site of the Sanctuary of the Virgin of Covadonga, drawn between ridges of limestone rock and surrounded by forests. Important episodes of the beginning of the Reconquest took place in its surroundings.

Plan your stay in Covadonga

Such a historic place is located in the heart of the Picos de Europa National Park. The visit to the sanctuary and its immediate surroundings takes about half a day. However, it is advisable to dedicate more days and also enjoy Cangas de Onís. Do not miss the viewpoint of La Reina as much as the rest of the picturesque scenic spots. To extend your trip, you can go to Oviedo or Gijón, thus continuing the review of Asturian history.

On the other hand, these are our favourite places to eat and sleep in the town.

To fully understand what to see in Covadonga it is essential to know its history. In this way, it was already a place of worship before the Christians arrived. However, its exuberant nature would be magnified by the events that took place in the 8th century, traditionally associated with the Reconquista.

What happened at the famous Battle of Covadonga is, in fact, little known. Indeed, the first manipulations of the story date back to the time of Alfonso III the Great. The monarch ordered the elaboration of the Crónicas Asturianas, where the stories of his predecessors are detailed. Thus, according to the Crónica Albeldense and the Crónica de Alfonso III, the first Christian offensive was successfully carried out in Covadonga.

Almost nothing is known about the real dimension of the conflict. What is clear is that it gave rise to a dynasty that went from being a simple focus of resistance in the mountains to a real kingdom.

The tradition indicates that the inauguration of Don Pelayo was carried out in the Repelao, very close to the Sanctuary. This enigmatic event became a legendary fact also in very early dates. Its current meaning is due to Alfonso III, who turned the banner that Pelayo raised at the Battle of Covadonga into a symbol of the Asturian monarchy. The Victory Cross (908), guarded in the Holy Chamber of Oviedo Cathedral.

Today the mysticism of La Santina, the Virgin of Covadonga, is still intact. Associated with the Principality of Asturias, it is a popular pilgrimage destination. Devoted and curious people come there every year, including the royal family. September 8, the day of the Autonomous Community to which it belongs, is the high point in this respect.

What to see in Covadonga

The Sanctuary of Covadonga is part of the council of Cangas de Onis and is located in the Picos de Europa National Park. The origin of the natural space is in another created in 1918 with the name of Mountain of Covadonga National Park. The mountainous set was configured three hundred million years ago. Located in the heart of the Cantabrian Mountains, it belongs to the communities of Castile and León, Cantabria and the Principality of Asturias.

La Santina image and the cave that protects it are main things to see in Covadonga. This cave where the Virgin appeared to the Christian rebels is known as the Gruta de Covadonga. The space has a complex of buildings. The oldest is the classicist Collegiate Church of San Fernando (17th century). However, the most notable and monumental is the Basilica of Covadonga.

Access to the Holy Cave is via a steep staircase. There is also a passage in the rock through which one goes directly to the cave. On this route you can see the tombs containing the remains of Don Pelayo, his wife and sister, as well as that of Alfonso I, transferred from the Church of Santa Eulalia in Abamia. Some very devout pilgrims still climb the worn out hundred steps of the coiled staircase on their knees as penance.

A modest temple currently houses the image of the Virgin of Covadonga and was built after the Civil War. The previous one disappeared during it. This old structure was designed by the local scholar Roberto Frassinelli, the “German of Corao”. In 1874, Frassinelli, conceived a colorful and historicist wood construction that was partly paid for by its promoter, the Bishop of Oviedo Benito Sanz y Forés.

Previously this space was known as the Miracle of Covadonga. There was only a weak structure of cantilevered wood, which according to the legend had been built by angels. It was practically a ‘temple in the air’.

An accidental fire destroyed the old structure. Later the renowned architect Ventura Rodriguez proposed a reconstruction plan. This plan aimed to incorporate the cave itself into a great sanctuary that would pay tribute to the Spanish Nation. It had the approval of the Count of Campomanes and the enlightened monarch Charles III. From that 1779 project only the body was made, which served as a base right at the foot of the cave.

Next to the waterfall that flows from the Sanctuary, the Fuente de los Siete Caños (Seven Spouts Fountain) stands out. This landmark that can be seen in Covadonga has miraculous properties. It is said that it assures the marriage in the next year to whoever drinks from it.

After the dramatic fire of 1777, the Cabildo of the Cathedral of Oviedo gave its image of the Virgin of Covadonga to the Sanctuary. It is the oldest of those that are preserved today. In this way the medieval carving was lost. Later, during the war of 1936, the sculpture was exiled to the Spanish Embassy in Paris.

When the classicist project was abandoned towards the end of the 19th century, the architect Federico Aparici y Soriano managed to complete one of his most outstanding works. It is a church with three naves, with two large towers on the main facade and a transept. This building to see in Covadonga is characterized by its neo-Romanesque historicist style and its French inspiration.

The new temple of the Virgin of Covadonga was inaugurated in 1901. Shortly after, the pontiff Leo XIII raised it to the category of Basilica. The Sanctuary was visited by Pope John Paul II in 1989.

In the interior of the church to be seen in Covadonga two paintings stand out. On the one hand, the canvas of The Annunciation by Vicente Carducho (1576-1638). On the other hand, the Proclamation of Don Pelayo in Covadonga, signed by Luis de Madrazo in 1855 and loaned by the El Prado National Museum. The Museum of Covadonga, with local elements of great interest, is another place to see in Covadonga.

The spirituality of Covadonga is a consequence of the powerful nature that shapes its surroundings. Its Sanctuary is a privileged starting point to enjoy the rich local animal and plant life. The flora includes beech, oak, mixed woods and holm oak, walnut and lime trees. Meanwhile, in the fauna, chamois, roe deer, wolves, vultures, ducks, golden eagles, capercaillies and brown bears.

When leaving the Sanctuary’s enclosure, a 12 km long and winding road opens up, leading directly to the incomparable spot of the Covadonga Lakes. Along the way, it is advisable to stop at the La Reina Viewpoint, from where the visitor can enjoy spectacular views. At the end of the route, Lake Enol appears (1070 m).

Above this is Lake Ercina (1118 m), which is very close to the Pedro Pidal Visitor Reception Centre. It is located in La Buferrera, a rest and parking area subject to restrictions by the local authorities. It is possible to access the lakes through a regular transport line. 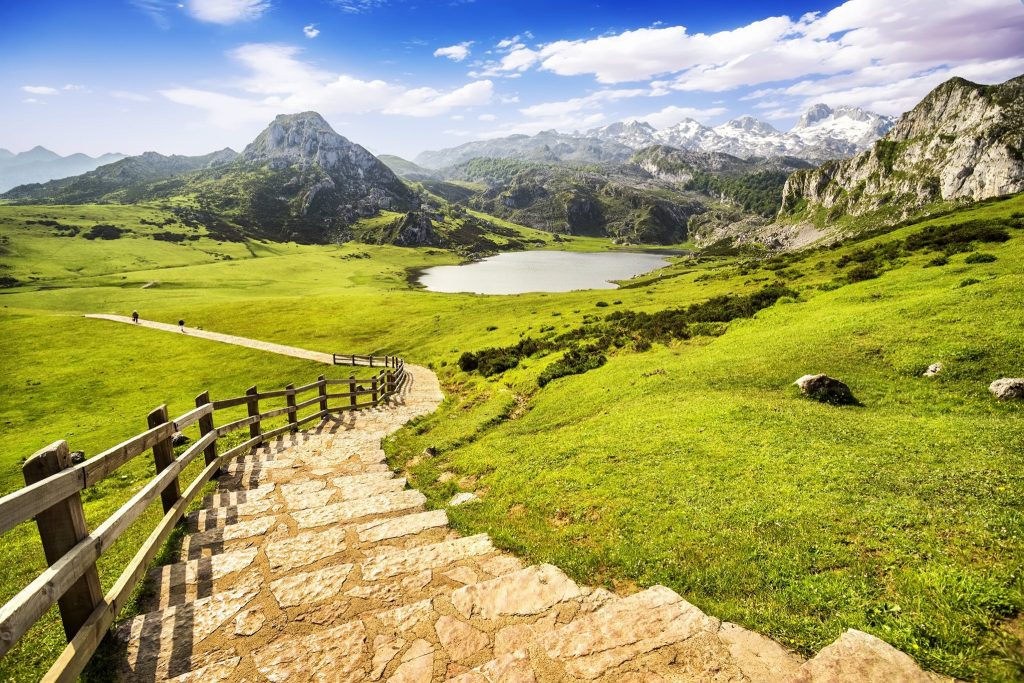 From the lakes there are magnificent mountain trips to complete what you can see in Covadonga. It includes the option to climb Peña Santa (2479 m). There is also the possibility of approaching the Ordiales Viewpoint (1681 m) or the Vega de Ario (1610 m).

The GR-1 Historical Path links the towns of Ampurias (Girona) and Finisterre (A Coruña) passing through the area of Covadonga. It is an itinerary dotted with Roman roads, royal ravines, old merchant roads and secret paths along which the maquis wandered during the early post-war years.

Once you have enjoyed the best that Covadonga has to offer, come and see the rest of the province of Asturias and its active tourism.

The main festivity to see in Covadonga is Nuestra Señora de Covadonga (September 8th), when La Santina goes out in procession.

Another notable event to see in Covadonga is the Fiesta del Pastor in vega del Enol (25 July).