Big cities are never a good choice for stargazing; as there is a lot of light pollution that prevents the details of the night sky from being discovered. However, there are more remote areas where; either because of the altitude at which they are located, because they are rural areas or because they have a better view of the night sky, watching the stars becomes a genuine spectacle. 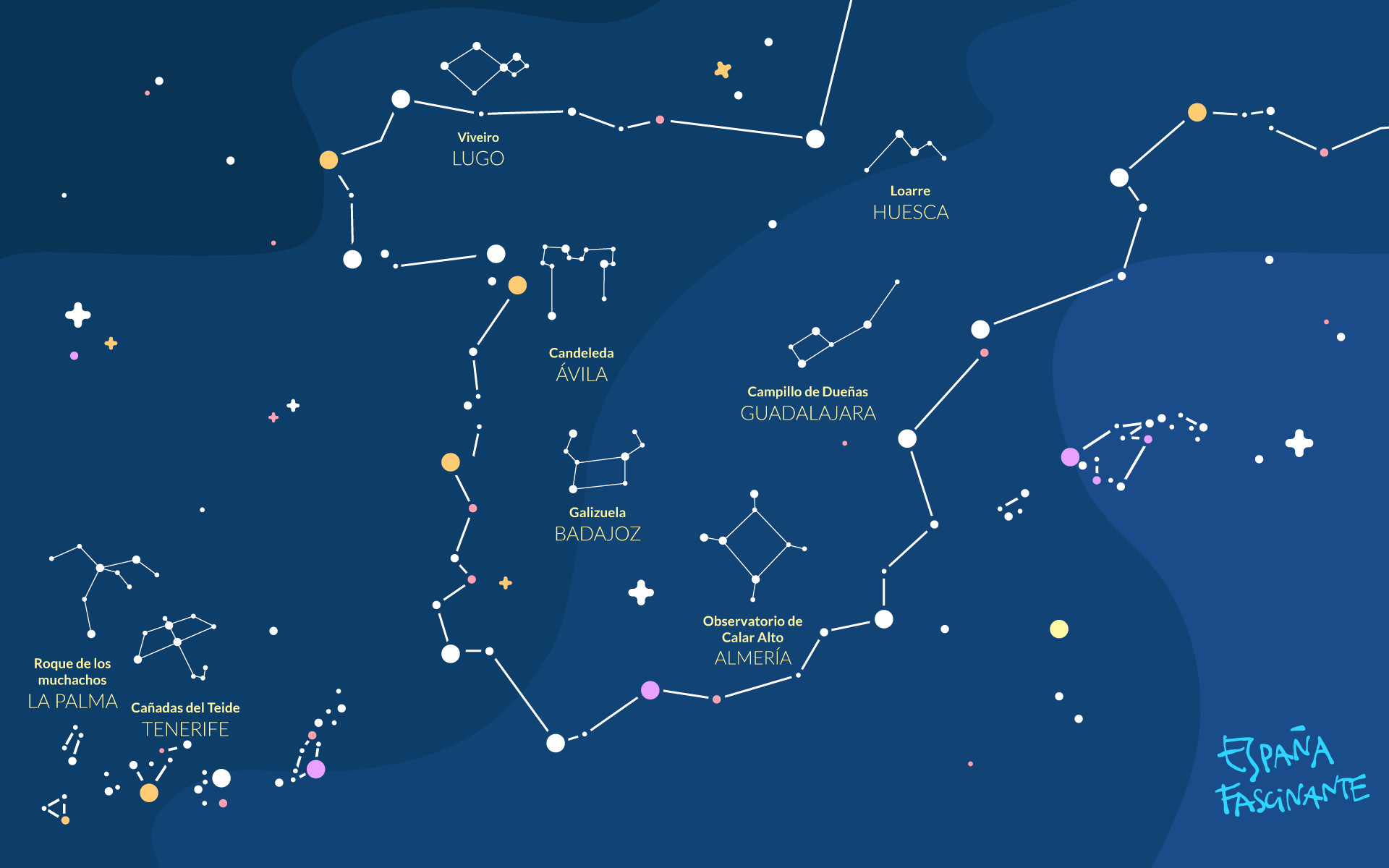 In order to make this selection of places from which to observe the stars, different platforms dedicated to the study of light pollution and its impact on different localities have been taken into account. Below is a selection of some of the best places to stargaze.

Esparragosa de Lares is one of the villages in Extremadura chosen by the Extremadura Platform, Buenas Noches for the good visibility of its night sky. It is not surprising that Extremadura is one of the communities where you can find more places to observe the sky, as it has one of the starry skies with less light pollution in Europe. The aforementioned project has been recognised by Stars4All (a European project dedicated to the conservation of the night sky) and has been awarded the Starlight certificate; which accredits the excellent quality of Extremadura’s sky and its commitment to its protection and conservation.

Thus, Galizuela (district of Esparragosa de Lares) is included in the Celestial Viewpoint Network; which means that in these locations there are night-time communication supports that provide an interpretation of the starry scenery. In this way, these structures show the stars and constellations that can be seen from the place where they are located. The location of Galizuela is ideal for stargazing, located in the area known as La Siberia, whose name refers to the distance from the capital of the province. To reach the viewpoint of Galizuela there is a route that starts from the village cemetery, passing through Calleja de los Lirios to reach the viewpoint. The route consists of a kilometre and a half. The best time to enjoy the night sky in this town is during the spring and summer; specifically the viewpoint is located in the coordinates latitude: 38º56’56.1 “N – longitude: 5º13’39.1 “W. 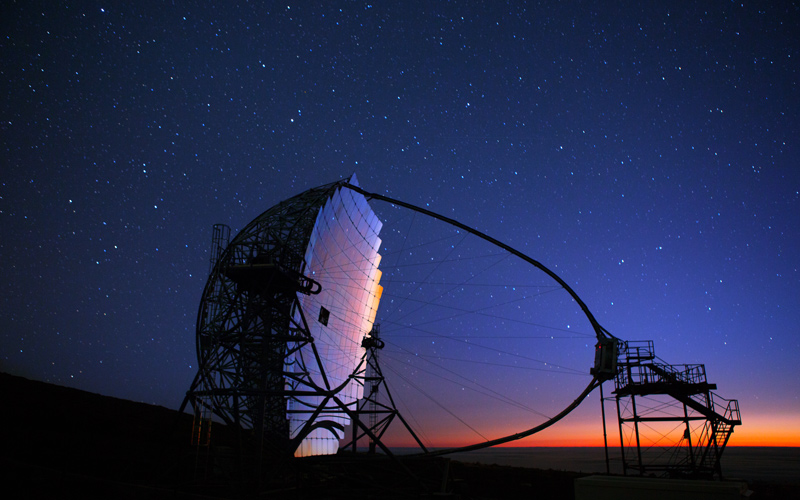 The truth is that the Canary Islands are one of the best places in the world to observe the stars at any time of the year. This is due to its privileged geographical location and, above all, to the clarity of its skies, which are among the cleanest in Europe, as they are protected by the Act on the Protection of the Astronomical Quality of Observatories, which controls light, air and radio pollution.

La Palma has many locations where you can observe the stars in all their splendour, such as the viewpoint of Llano del Jable, which has a Starlight certificate, or the Roque de Los Muchachos Observatory, located at 2,400 metres above sea level. Here you can enjoy one of the clearest night skies due to the cleanliness of the sky, stability of the ocean and the absence of disturbances. 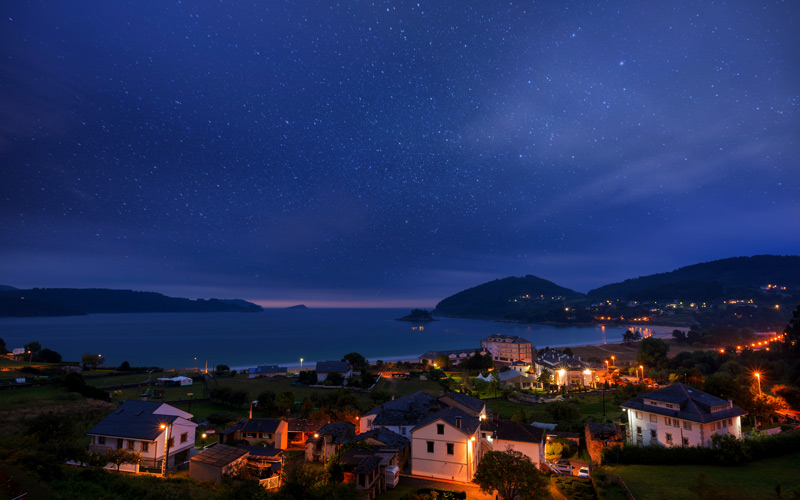 Viveiro, in Lugo, is one of the towns catalogued as “rural sky” in Light Pollution Map, a map that allows to check the areas of the world more and less contaminated by light. To do this, the map is based on the Bortle scale; which measures the brightness of the night sky using a scale of colors and classes to catalog the locations of the planet between more and less polluted. In this case, Viveiro has a blue colour that indicates the quality of its “rural sky” and a “class three” of a total of 9 classes. Level 1 being is the darkest sky on Earth and level 9 corresponding to the sky seen from the centre of a city. Therefore, it is not necessary to go into exile to the depths of a natural reserve to see the stars, but Viveiro, with its more than 15,000 inhabitants, is a good option to enjoy them.

Campillo de Dueñas is one of the best options to observe the stars for those who are in the province of Guadalajara or in nearby towns like Madrid. This small town of less than 80 inhabitants is perfect to observe the Milky Way; which shows an even more beautiful image framed in the most important monument of Campillo de Dueñas, the Zafra Castle. Thus, with a “class two” category and a grey colour indicating “typical dark sky location” on the Bortle scale, one finds one of the best nightlife settings.

Calar Alto Observatory, in Almería, is the largest astronomical observatory in Europe and also obviously an excellent place to stargaze. It is located at Calar Alto, a plateau of more than 2,000 meters high located in the Filabres mountain range. Although it is still known as Calar Alto Observatory, since 2019, its official name is Centro Astronómico Hispano en Andalucía (CAHA).

It is a space established as optimal to observe the stars; as proposed by the Einstein Association for Astronomy within the Nix Nox project, developed by the Spanish Astronomical Society. This project encourages experts and amateurs to make known accessible places where to observe the sky. 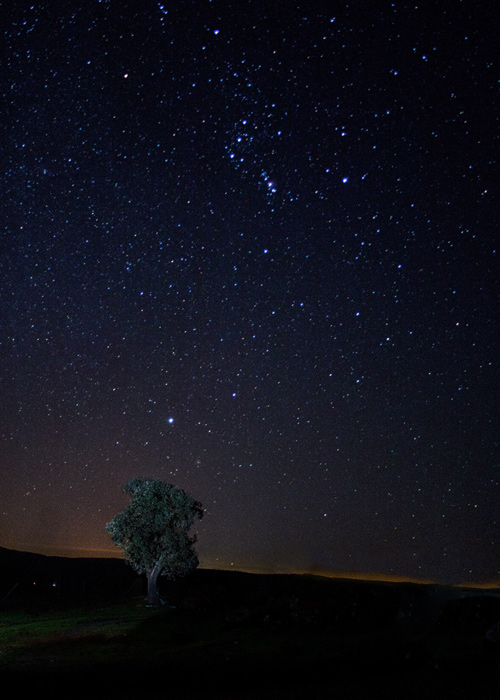 In 2013, the northern mountain range of Gredos was qualified as a Starlight Tourist Destination, while it also has the Starlight Dark Sky Certification, which is granted to spaces where a dark sky is guaranteed over an area of 900 kilometers. After this, a network of 19 starry viewpoints has been set up in the area, located in the municipalities of Arenas de San Pedro, El Hornillo, El Arenal, San Esteban del Valle, Villarejo del Valle, and Santiago de Tormes, Zapardiel de la Ribera, Navatejares, Puerto Castilla, El Barraco, Navaluenga, El Tiemblo, Candeleda, Navalperal de Tormes, Umbrías, Nava del Barco, Navarredonda de Gredos, Hoyos del Espino and San Martín del Pimpollar. This is due to its special altitude conditions, where there is minimal light pollution and the days are usually clear, to which we must add the environmental value that gives the Regional Park of Sierra de Gredos.

Another perfect location to stargaze is in the Cañadas del Teide, on the island of Tenerife. Specifically, inside the Teide National Park you can find Las Cañadas; a spectacular natural platform from which you can enjoy the starry scenery, since practically all its surface can see constellations and stars, as it is recognized as a Starlight Tourist Destination. From this location, more than 2,700 metres above sea level, the Instituto de Astrofísica de Canarias collects many images of the night sky. In addition, there are several viewpoints that have parking facilities to facilitate the experience. As a curiosity, in August there is the Perseid meteor shower; which we can also see in the early evening and located in the northeast the bright star Vega, belonging to the constellation of the Lira. 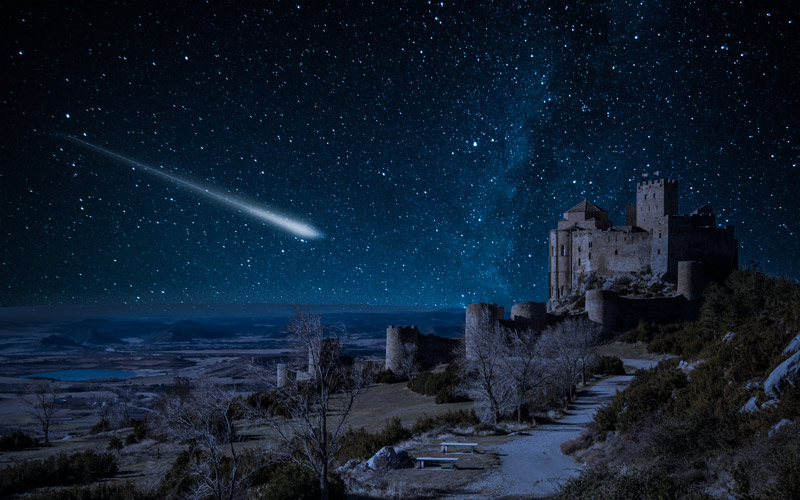 Loarre is a beautiful town in the province of Huesca where you can perfectly combine tourism during the day with seeing a wonderful starry sky at night. One of the most spectacular night-time landscapes to be found here is around the Loarre Castle; one of the most important Romanesque fortresses in Spain dating from the 11th century. This castle is located at the entrance to the Pyrenees; so it is not surprising that it is a good location to observe the stars. The Light Pollution Map highlights its low level of light pollution; with a blue colour and “class 3” on the Bortle scale that qualifies it as a “rural sky“.