Teixidelo beach is the only black sand beach in Spain and, possibly, in the world of non-volcanic origin. It is located in Cedeira, in the Serra de Capelada in the north of the province of A Coruña, Galicia. This unspoilt beach with rough waves and surrounded by cliffs, has complicated and little-known accesses that keep it away from the crowds and preserve all its splendour. 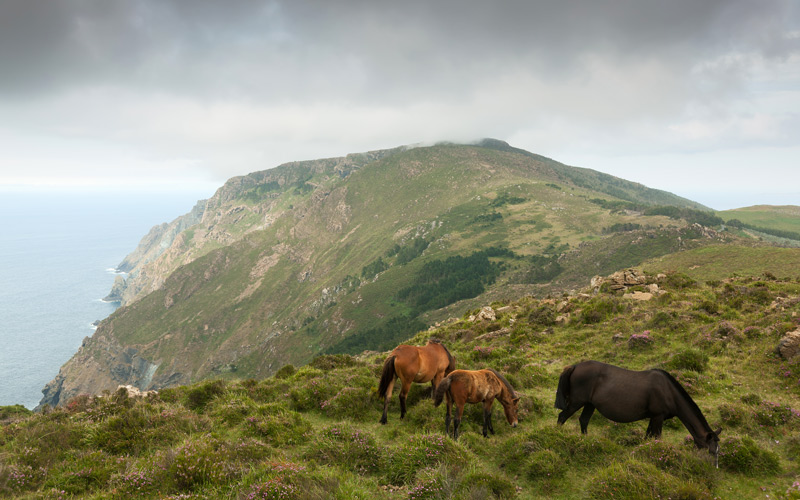 Thanks to its privileged location, in a remote place of difficult access, this beach maintains an aura of magic mystery. On the coast there are still remains of an old ship, the Bonnie Carrier; which ran aground in the area in 1986 and whose rusty hull is still there, fused together with the sand and rocks.

Above all, the contrast between the green vegetation of the mountains and the dark colour of the sand on the beach is striking. To complete this magnificent ensemble, the cliffs of A Capelada with their more than 600 metres above sea level, the highest in all of continental Europe, provide one of the best panoramic views of the area. It must be taken into account that it is a wild beach, with wonderful crystalline waters; but totally devoid of services. Similarly, bathing is not recommended due to the strong tides and the dangerous nature of the area.

A curious and unique geological phenomenon 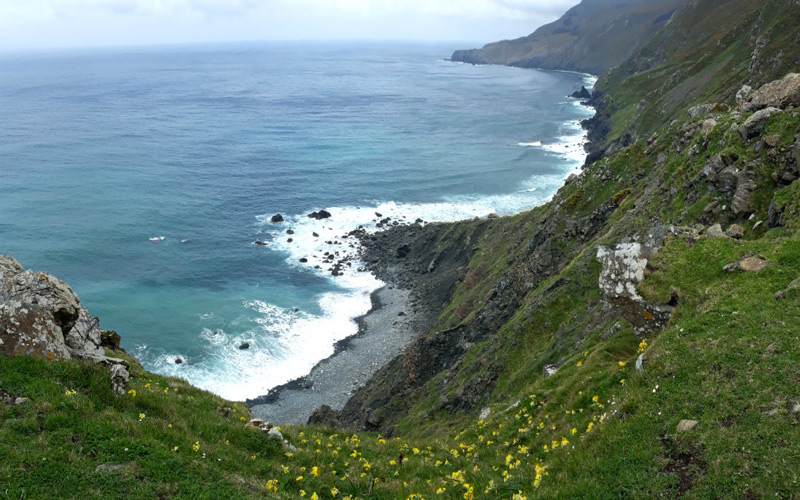 A curious geological phenomenon is that which stains the sand and stones of this unique beach in the world with black. The rocks that make up the beach are called ultramafic or ultrabasic and have a low percentage of silica; but a very high percentage of basic minerals with a high content of magnesium and iron. There are few places where you can find this type of igneous rock, known as peridotite. It is formed by olivine and is believed to be the majority in the upper part of the earth’s mantle. It is a dense, dark-coloured rock that originates at great depths, hardly reaching the surface, let alone a beach, unless it is the result of the action of a volcano.

When Teixidelo olivine decomposes it forms, with the help of oxygen, serpentine and magnetite; which are the minerals that form and give colour to the dark sand that covers the beach. If you look at it with a magnifying glass you can see green and black crystals. In addition, due to its remote location, the sea cannot move the sand from other nearby beaches to Teixidelo; whose silica is very different to that found here. Therefore, it is impossible to find any other element that is not formed by peridotite. 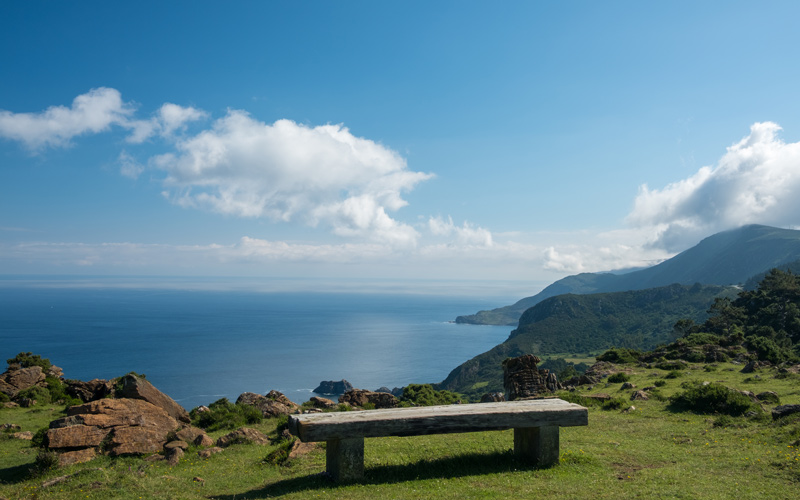 The area has places of great scenic and architectural beauty. Near the beach there is one of the mouths of the 19th century mining prospectors dedicated to extracting nickel from the area. In the vicinity it is possible to observe another phenomenon of nature, the waterfall or Fervenza de Teixideloconsus 50 meters fall. It is also worth noting the existence of the remains of a small glacial lake formed centuries ago; when presumably the sea level was much lower than it is today. Remains of moraines, striations in the rocks or the U-shaped valley are some of the elements that testify to its existence. 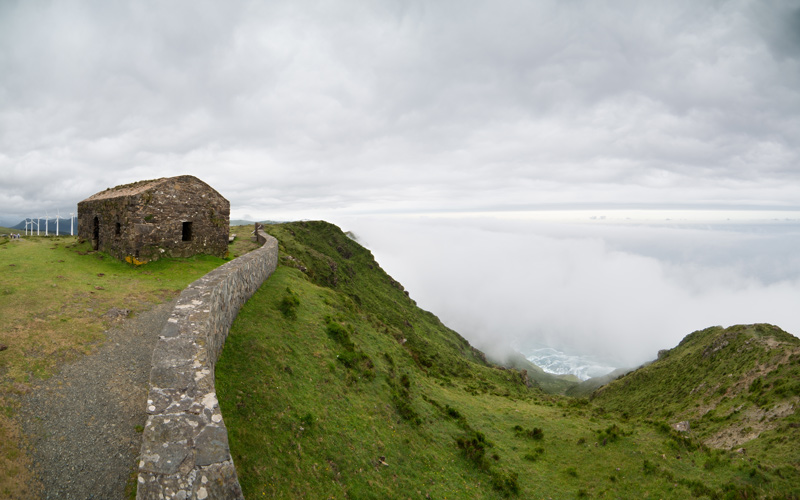 Garita de Herbeira is a magnificent place from which to enjoy a panoramic view of the beach and the Island of Gabeira, as it is the highest point of the Vixia Herbeira cliffs. It is worth noting that they are among the four highest cliffs in Europe after Hornelen in Norway, Cape Enniberg in the Faroe Islands and Coraghaun in Ireland. 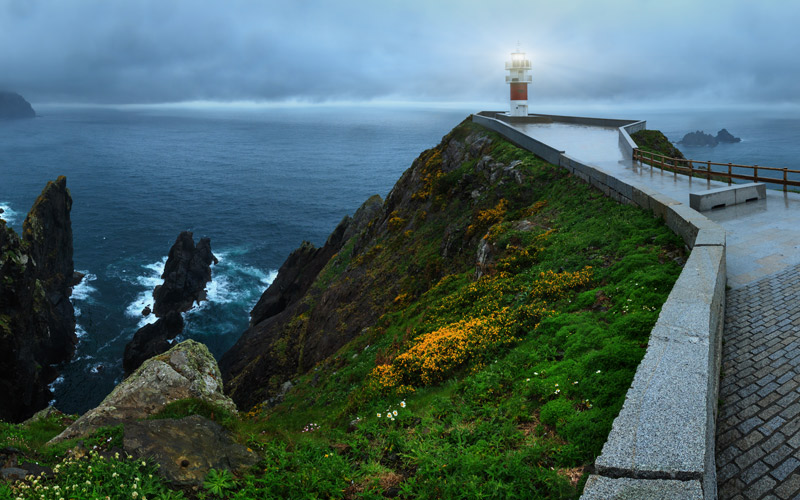 Cape Ortegal with its lighthouse and panoramic views is the start of the Great Medieval Hiking Route, unique in the Rias Altas. Nearby is the village of San Andrés de Teixido, known for its romerias, pilgrimages and legends.

Routes you can do 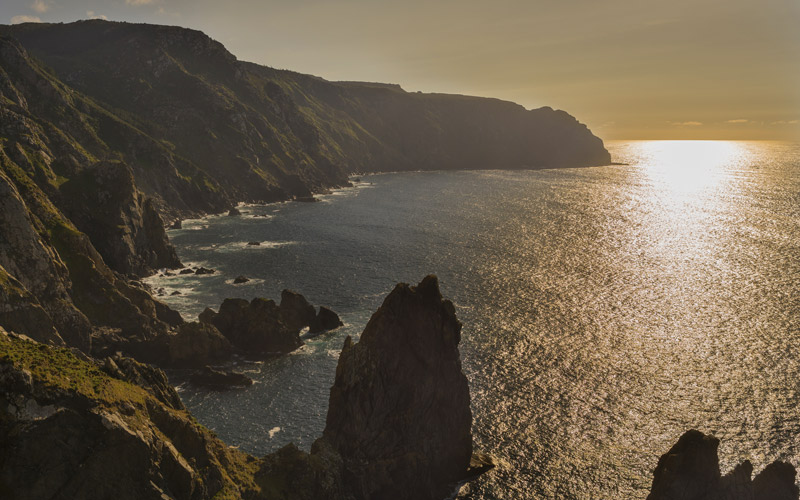 The beach itself is already difficult to access with poorly maintained roads and trails; opened by native animals that confuse visitors. The number of cliffs and their potential danger recommend caution when visiting this area. Not only because of the real danger of falling off, but also because it is very easy to get lost; so it is advisable to go with experts from the area or follow the directions of other users.

The Cedeira Council, for example, provides guided tours and all kinds of geological routes in Galicia, the so-called “xeorutas”. For years and within the framework of the project to promote the Cape Ortegal Geopark; the different councils in the area have been offering informative routes to publicise the geological heritage of the area. One of the best known is the route of the black beaches of Teixidelo. The route begins and ends at the Teixidelo crossroads, passing a viewpoint and a monument dedicated to Leslie Howard, the actor who died when his plane was shot down during the Second World War, although not precisely near the area. The path continues towards the glacier, or rather, the place where it must have been millions of years ago. Next, the A Capelada fault, a crack almost 300 million years old, the waterfall and finally, the beach.

A Coruña, beaches, cliffs, Galicia, hiking, natural environment, viewpoints
It may interest you...