The lucky geographical location in a Sandy isthmus surrounded by the sea made that A Coruña was attacked many times during the two millennia it has existed. It is indeed a city full of history.

Plan your stay in A Coruña

A Coruña is a historical city, modern and magnificent, with gorgeous sea inlets, bays and excellent beaches, together with several monuments and museums. Thus, things to do in A Coruña can take you a couple of days to accomplish them all. If you had some spare time, we would recommend you to visit the surrounding areas of Betanzos and Pontedeume.

What to see in A Coruña

A Coruña is one of the most beautiful cities in Spain, and in fact, Riazor and Orzán beaches are proof of it. The Peninsula where the Old city is located, apart from the Heracles Tower (a symbol of the city), is a combination of different Romanesque streets, plazas and medieval and Baroque churches. Among the main sights of the city are the remains of the walls, Santiago (12th century, the oldest church in A Coruña, declared Historical-Artistic Monument) and Santa María del Campo (it houses the Sacred Art Museum) churches. However, the nerve center of the city is María Pita Plaza, presided over by María Pita Statue, representing the heroine carrying a lance, and the sub-lieutenant who led the attack against the city in 1589 at her feet.

The city has several castles and fortresses that guide you throughout the history of A Coruña. San Antón Castle dates back to the 16th century, built in order to protect the city against the attacks from the sea. It became a prison in the 18th century until 1960, when it was granted to the City Hall. It was declared Historical Artistic Monument in 1949, and of Cultural Interest in 1994. Since 1968 it houses the Archeological and Historical Museum of A Coruña. Among other museums we would like to highlight are: the Fine Arts Museum of A Coruña (it has works by Murillo, Tintoretto, Rubens and Goya), Museum of Man, and the Science Museum, which together with the Aquarium Finisterrae, will delight your children. Although it is not a museum, the typical houses with white glazed galleries built in the 19th century constitute one of the most famous views of the city. You can also learn about the most important figures of the history of the city, since their houses have now become museums as well. Among them, you should visit the heroine María Pita House Museum, the writer Emilia Pardo Bazán’s House, the Republican politician Casares Quiroga’s House, and the painter Pablo Picasso’s House where he lived between the years 1891 and 1895. 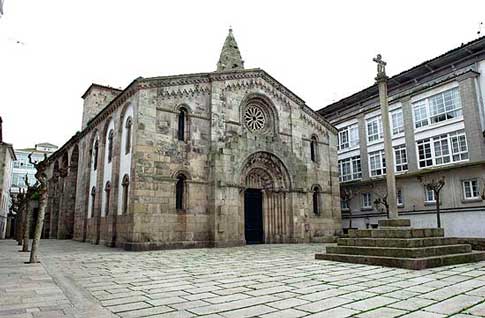 The Virgin of the Rosario is the patron saint of A Coruña. The festival commemorating it is held in the first eight days of October. The city also celebrates the Hogueras (Bonfire) of San Juan on June 23rd, and celebrations devoted to María Pita are held throughout August.

Nuestra Señora de las Ermitas, the impressive temple hidden in the mountains of Galicia
As Ermidas is one of the most unknown villages in Galicia, specifically in the province Más información