Napoleon Bonaparte’s expansionist delusions led to one of the most tragic episodes in Spain’s history; the notorious and catastrophic Battle of Trafalgar. On that October 21, 1805, the beaches of Cadiz‘s coast were stained with blood after the enormous number of human losses caused by the naval battle between the humiliated French-Spanish fleet and the triumphant British fleet. There, as on previous occasions, was the first-hand witness of history, none other than Cape Trafalgar.

This small peninsula that enters the Atlantic is located next to Caños de Meca, more specifically in the municipality of Barbate. Cape Trafalgar stands out not only for the events that surround it; but also for the beauty of its coast and its unspoilt nature. A perfect combination for this wonderful enclave in the province of Cadiz to be so popular throughout the year.

Road to the disaster that Cape Trafalgar witnessed

The defeat of Trafalgar changed the course of Spain’s history completely; as it meant the decline of the Spanish overseas empire, a place it had occupied since the 15th century. This first consequence led to much more worrying problems for Charles IV’s reign; such as the stagnation of trade with the American colonies and the beginning of their process of independence, both of which were caused by the loss of control over Gibraltar. The naval disaster was also aggravated by the deterioration of the Royal Treasury and the subsequent Napoleonic invasion. 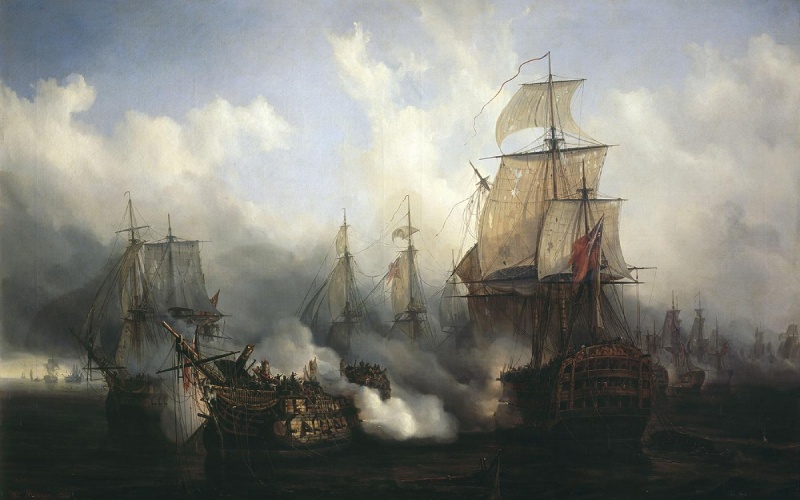 Illustration of the Battle of Trafalgar. | Shutterstock

The path to this dramatic outcome is to be found in the military alliance between the monarchy of Charles IV and the French Republic; thanks to the treaties of San Idelfonso in 1796. According to this agreement, both agreed to maintain a joint military policy against Britain; which at the time was threatening the Spanish fleet on its journeys to America. This forced Spain to contribute financially to the Napoleonic wars and to make the Royal Navy available to France to fight the British navy.

When the British resumed hostilities with France in 1803 to prevent Bonaparte’s imperialist ambitions; he had already begun to draw up a plan to cancel the British fleet and invade its islands. The strategy, implemented in early June 1805, was to deceive the British fleet away from the English Channel in order to transport a contingent of French and Spanish ships to take action on the British possessions.

However, the project was ruined thanks to the lack of coordination between the squadrons and the ineptitude of the commanding officer Pierre Villenueve; who ordered a retreat to Cadiz in search of refuge. It seems that he was surprised by an English squadron that he was unable to beat; so in desperation he decided to cover his tracks before waiting for further orders. Naturally, Napoleon did not like this at all; as without the support of the combined squad his plan would collapse.

By the time the French-Spanish fleet reached Cadiz, a British squadron commanded by the legendary Horatio Nelson had blocked the city’s bay, preventing Allied ships from entering the Mediterranean. In response, Villenueve chose not to leave until reinforcements arrived; bearing in mind that the capacity of the British navy was much greater than the combined fleet, even when the latter had a greater number of troops.

However, something tricky must have happened to Villenueve for his opinion to change so suddenly and he threw himself into battle. Apparently, he had received news that Napoleon had sent a replacement in his place; which provoked the officer’s anger and his decision to leave Cadiz to recover what little reputation he had left. Finally, the 33 ships of the combined squadron met the 27 ships of the enemy forces a few miles from Cape Trafalgar in the early hours of the 21st October.

Map on the division of the troops in the Battle of Trafalgar. | Wikimedia

Aware of the inferiority of their tactical position and a defeat in advance; the Spanish and French crews fought heroically for hours against a clearly superior enemy. While Nelson had distributed his forces into two well-organised columns; Villenueve decided to set in motion a dreadful manoeuvre that guaranteed the English a swift victory. He ordered a round turn, forming a perpendicular line, heading south towards Gibraltar. This led to the formation of a crowd, which was completely altered, at the mercy of the English guns. Just six hours after the first attack, the battle was over with Nelson’s victory; who died after being shot by the enemy.

The severe mistakes made by the French admiral condemned the Spaniards to disaster at Trafalgar. Total Spanish and French casualties were 3,243 dead and 2,538 wounded compared to 449 dead and 1,241 wounded for the English. The battle also took a large generation of Spanish sailors; such as Alcalá Galiano, Francisco Alsedo, Federico Gravina and Cosme Damián. In short, a dramatic episode that would go down in Spanish history with a bang.

The event was such a tragedy for the Spaniards that no memorial can be found on the scene of the battle; unlike the great square in England in honour of Admiral Nelson. There, at Cape Trafalgar, the only thing that can be seen is a plaque placed on the road that goes up to the Trafalgar Lighthouse, where one of the phrases about the battle that Benito Pérez Galdós related in his National Episodes appears.

Trafalgar Lighthouse, the other great protagonist

Near the current lighthouse, more than two hundred years ago, one could hear the roar of the cannon fire and feel the terrible agony of the men who were hit. Some of the wounded and victims of the battle were carried away by the reddish waves to this area; which is now crowded with tourists. 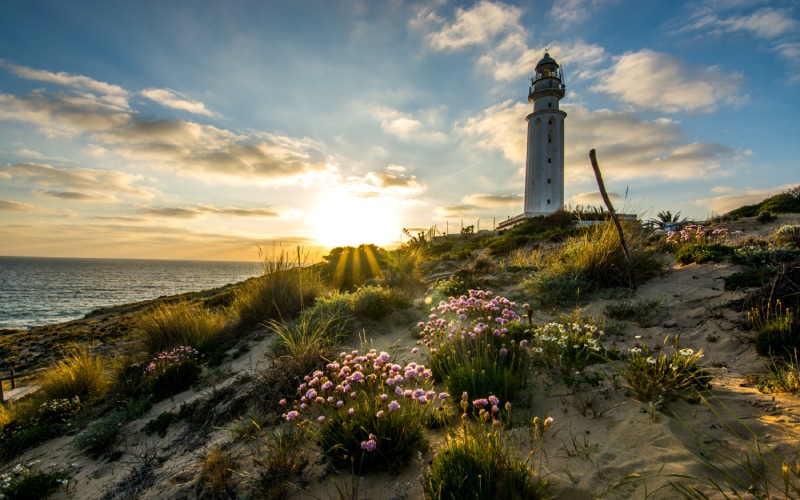 With its more than 34 metres high, the Trafalgar Lighthouse is the other great protagonist of the small island. Since it was built in 1860, this white tower has become one of the most significant buildings on the coast of Cadiz for two main reasons: because it stands on an important Andalusian geological area such as the Tómbolo de Trafalgar, and because of the historical significance it has behind it.

It is true that the lighthouse was born after the naval war, but its precedents go back many years. In the small reef where it is located, several archaeological sites from the Roman period were found, including a salting factory and a temple dedicated to the goddess Juno. 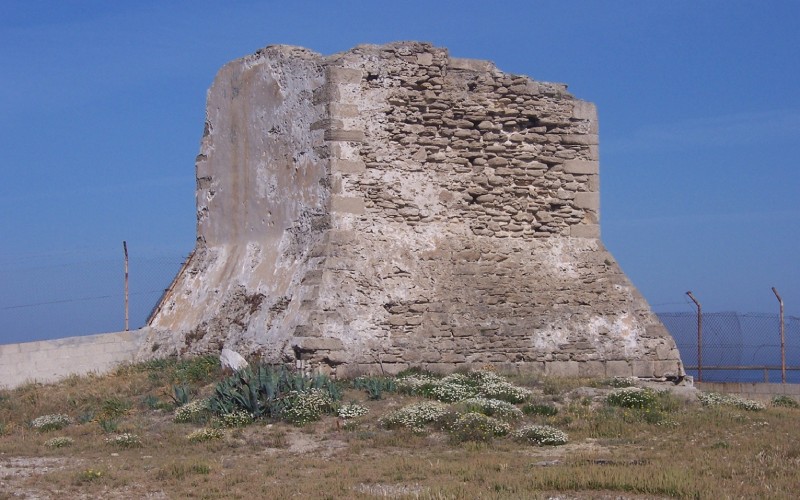 Next to the lighthouse are also the remains of the ancient and historic Trafalgar Tower. Part of its infrastructure was demolished in the 19th century due to its poor state of conservation, and some of its materials were used to build the current lighthouse. There are currently discrepancies regarding the origin of the tower; as some believe it was a 9th century Muslim watchtower. Others point out that it was built as a 15th century surveillance building; ordered by the Duke of Medina Sidonia to protect his fisheries in the area.

The latter is the more extended version of the two, especially because it coincides with the fortification project that Philip II had commissioned on the Andalusian coast to defend it from the continuous Berber attacks. In fact, the building connected with the Tower of Meca and that of the Tagus; thus forming a defensive system whose mission was to warn nearby towns of the presence of pirates at sea.

El Tómbolo and the beaches of Trafalgar

The connection of the cape with the coast is possible through a thin strip of sand called the Tómbolo de Trafalgar, one of the natural wonders of that area. The union of the peninsula and the small isthmus took place about 6500 years ago; when the sea level reached its current level. 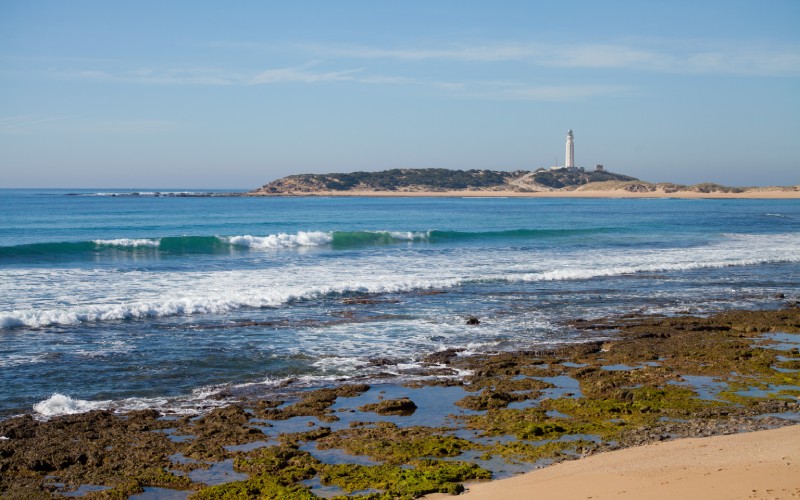 View of Cape Trafalgar from one of its beaches. | Shutterstock

The geological value of the area led to it being declared a Natural Monument by the Andalusian Government in 2001. Its interest lies in the fact that it is the only example in the region that has a double tombolo; created by the sand dragged by the tides. Thanks to this, you can appreciate the beautiful landscape of fine sand dunes; the extensive beaches and the rocky area on which the lighthouse sits.

Meanwhile, to the left of the great Trafalgar Lighthouse is one of the most impressive unspoilt beaches on the Cadiz coast. It offers a unique beauty to all those who visit it thanks to the effect caused by the combination of golden sand and crystal-clear waters; spread along 20 kilometres of coast. The best thing about it is that there are hardly any buildings around; so it gives it a free and relaxed atmosphere.

El Faro Beach is so extensive that it is divided into two areas. The closest to the tower is the Playa de los Bancos, where there are the strongest water currents on the whole coast; so you have to be extremely careful when visiting it. A little further away from the lighthouse is the Playa Aceitera, an area a little more serene if you want to enjoy a good swim. 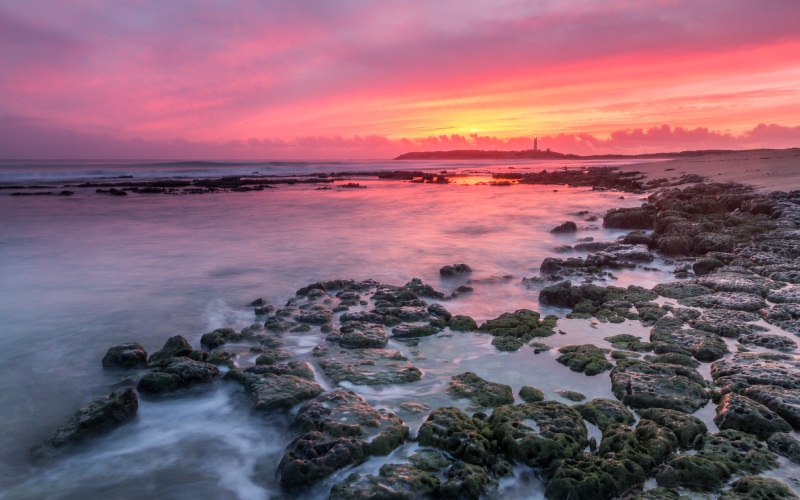 Sunset from one of the beaches at Cape Trafalgar. | Shutterstock

On this great beach there is one of the most impressive, but also most fearsome phenomena of the strait. It is called the Riza de Trafalgar; and it occurs when underwater currents from different directions are caused by the tides. It is a phenomenon that can be extremely violent.

Somewhat quieter and more accessible is Playa de Marisucia, located on the left side of the Trafalgar Lighthouse. It is considered to be one of the most beautiful and unspoilt beaches in Caños de Meca; as it has one of the most crystalline waters in the area and is surrounded by natural dunes. Although everyone agrees that the most outstanding thing about the beach is its views; as on the clearest days you can even see the Moroccan coast.

Andalusia, beaches, cádiz, islands, lighthouses
It may interest you...

13 of the most original and spectacular staircases in Spain
Although for some they only serve to go up or down, many believe that stairs Más información

6 islands that are neither in the Canaries nor in the Balearic Islands
[vc_row][vc_column][vc_column_text]The Balearic and Canary Islands are the best known, but there are many small islands Más información

11 Fishing Villages for this Summer
Not all of the coast are beaches. Along the thousands of kilometres of Spanish coastline Más información