Agüero is a small town in the province of Huesca with just under 130 inhabitants and belongs to the region of La Hoya de Huesca. The most fascinating thing about this town is the surprising rock formation under which it lies. This is the Mallos de Agüero, the natural boundary between the Pyrenean mountains and Somontano. 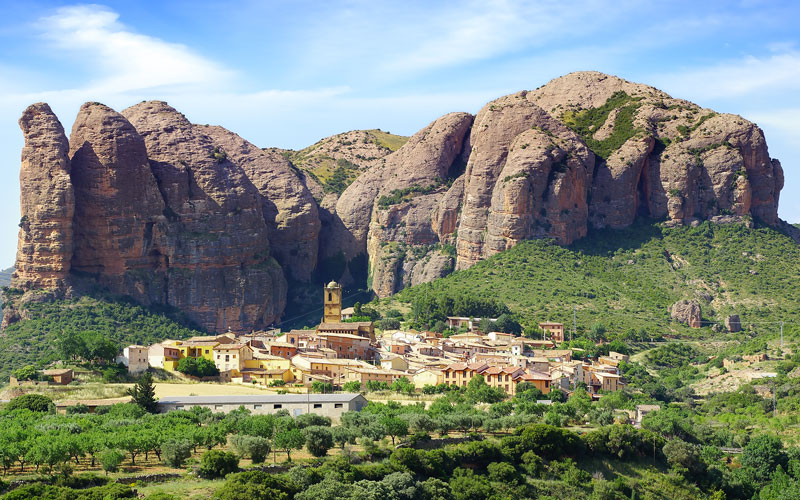 The picturesque village of Agüero is known for being in the shadow of the spectacular Mallos de Agüero. These mallos are reddish rock formations hundreds of metres high that have been sculpted by erosion and have survived to the present day. Although they are not as well known as the Mallos de Riglos, they are an impressive sight. 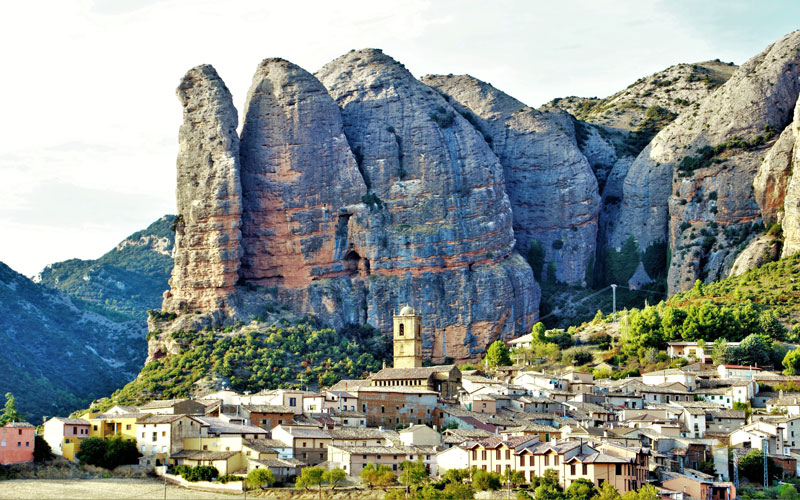 To reach the town of Agüero you have to cross a thick forest and a winding road that gives little indication of what lies ahead. In the distance, the beautiful old town of Agüero stands out, protected by its large, tall stone monoliths. These are the Mallos de Agüero, large dolomite structures that act as a goal for climbers and a refuge for the birds that constantly fly over them. These slightly reddish-coloured structures, typical of the Tertiary era, surround the northern part of the town. Mallos de Agüero are a branch of the long Sierra de Santo Domingo. Among the mallos, the “Peña Sola” stands out, which is separated from the others and is also perfect for climbing. On its western slope it is even higher than 200 metres. 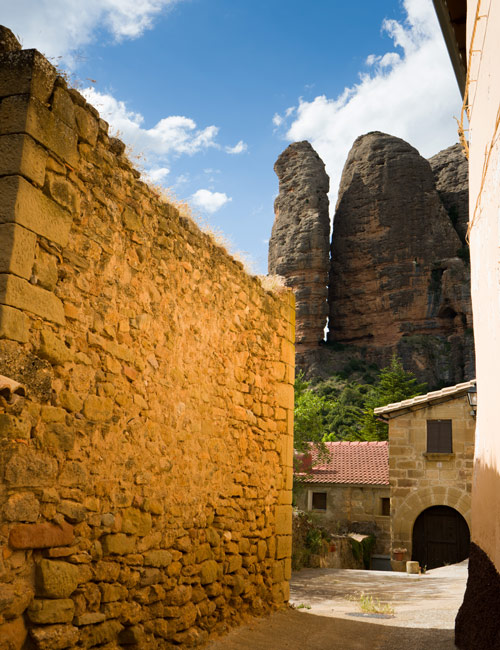 View of the Mallos from the streets of Agüero | Shutterstock

Agüero is surrounded by mountains, so it is not surprising that the houses of the town are distributed in steps at an altitude of almost 700 metres. Thus, the town is located on the top of a high hill, enclosed between the mountains of the pre-Pyrenees. Nearby is the course of the river Gállego; and on the opposite bank to Agüero are the famous Mallos de Riglos. 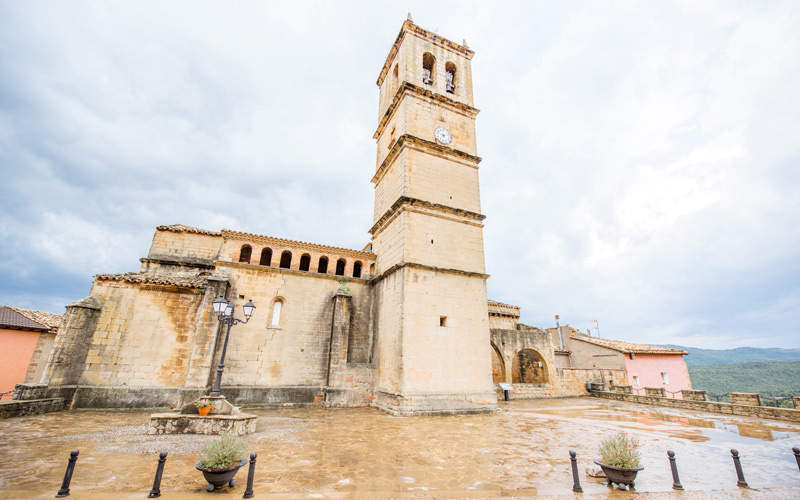 Due to their location, the houses still preserve the appearance they had in the past. It is striking to see how between the streets and the roofs of the houses the presence of the Mallos, always present in the town, stands out.

Strolling through the streets of Agüero you can easily reach the church of El Salvador; which is located in the main square. The church is notable for its tall, square tower. Although the tower was built between the 16th and 17th centuries, it is a temple with three naves and of Romanesque origin dating from the 11th century. However, over time it was reformed and finished in Gothic style. Meanwhile, its semicircular apse was built in the Baroque period. Under this apse is the original 16th century crypt of the temple. 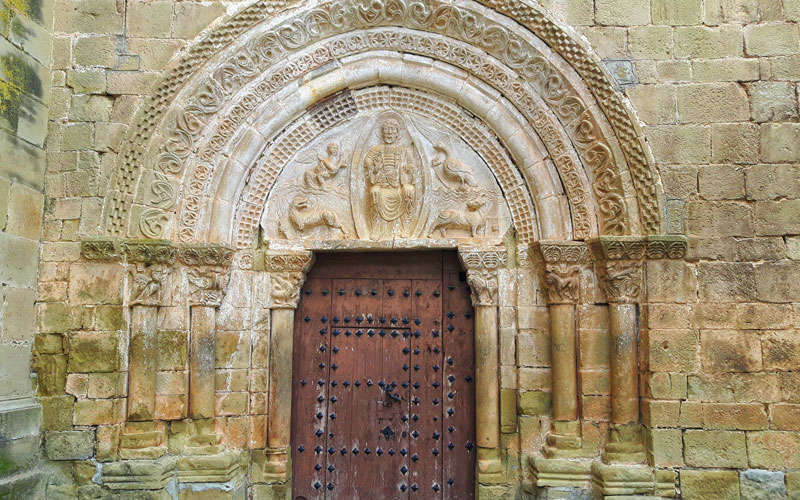 The side naves of the church of El Salvador correspond to the late Gothic period, and have cylindrical pillars and star-shaped vaults related to the Renaissance. The piece with the most artistic elements is the doorway, a beautiful combination of archivolts carved with different Romanesque motifs. Its tympanum and the Pantocrator in its centre, surrounded by the four figures attributed to the evangelists (the angel, the bull, the lion and the eagle), are particularly noteworthy.

In the old Abbey House, Luis Galindo Bisquer, known for being the parish priest of Agüero, created a most curious museum. It is the Museo del Órgano, a space dedicated to this musical instrument that is usually found in churches. In this thematic organ museum you can see hundreds of pieces related to organs, many of them different from each other. Thus, the museum exhibits some pieces whose origin dates back to the 16th century. While the visitor gets to know the museum, the sound of an organ can be heard in the background. This museum is unique in the world.

The church of Santiago is, without a doubt, a temple that is a must-see when visiting Agüero. Although it is located one kilometre from the town, the church of Santiago is a hidden treasure; so the walk to it will not weigh down the visitor. A Romanesque temple known in Aragón for its beauty, which is not surprising when you discover that it has been declared a National Monument even though it is unfinished. 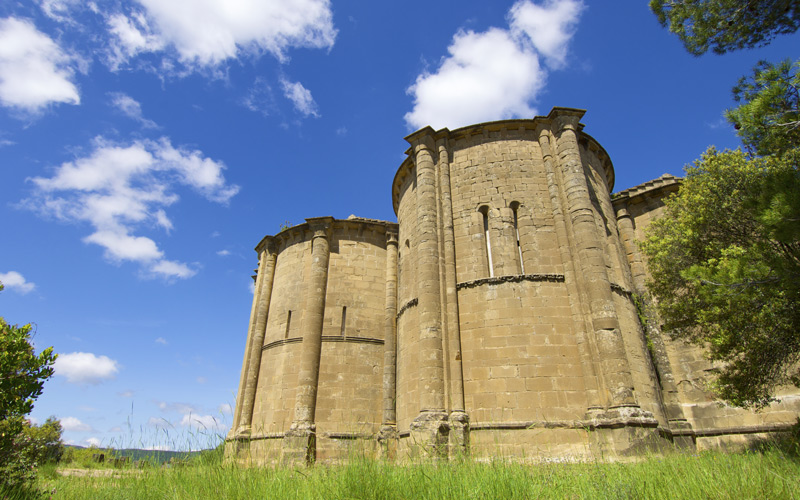 The structure of the church has three naves and a chevet with a triple apse. Its façade is one of the most striking elements; where you can see a relief of the Adoration of the Magi on the tympanum. The dedication of the church shows its proximity to the Pilgrim’s Way to Santiago de Compostela.

But its interior also stands out, as it has beautifully decorated capitals; which have been classified as being of special value. The sculptural works found here have been related to the master of the cloisters of San Pedro del Viejo and San Juan de la Peña. 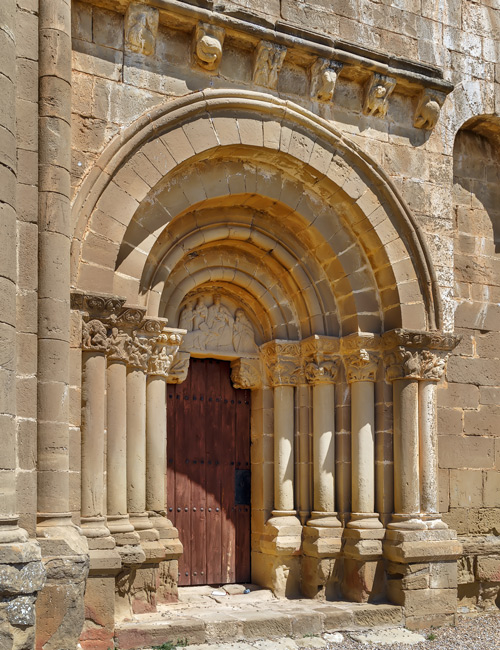 Church of Santiago in Agüero | Shutterstock

The large number of different stonemason’s marks on the ashlars suggests to experts that many workers were involved in its construction, given that it was a large-scale project. To visit the interior, you must first contact the Town Hall.

The church of Santiago of Agüero was intended to be a church with a Latin cross plan but, as mentioned above, the nave was never built. As a result, it is a more limited church in terms of length; consisting only of the transept and the three apses, all dating from the 12th century.

For those who come to Agüero willing to go on a hiking route, an interesting option is the Al-Foraz cave. This enormous cave has excellent views of the surrounding mountainous landscape. Embedded in the rock, it is possible to walk inside it.

Caves, Huesca, mountain villages, museums, viewpoints
It may interest you...