The Cathedral of Santa María, in Seville, is the largest Gothic-style temple built in Western Europe. Its relevance is such that it deserves the consideration of an Exceptional Universal Value.

Muslims built a mosque between 1172 and 1198, of which several elements remain visible. It had 17 naves separated from each other by pointed horseshoe arches and a large courtyard or sahn, which coincides with today’s Patio de los Naranjos. As usual, when the city was conquered in 1248, the mosque was consecrated as a cathedral.

The earthquake of 1356 seriously affected the building, so from 1388 the option of building a new temple was analyzed. The Council in 1401 decided to start the works from the bottom and at a dizzying pace. It would be a monumental and gigantic church ascribed to late Gothic and built in the 15th century, with a rectangular floor plan of 116 by 76 metres. Two lines of chapels were added to the five projected naves on both sides and a transept that interrupts them without sticking out.

The first project could have been by the master Alonso Martinez. Later, the works were directed by Ysambarte, the Norman Maese Carlin (Charles Galter), Juan Normant and Alonso Rodriguez. On October 6th 1506 the last stone of the highest part of the dome was symbolically placed, and the following year the new temple was consecrated.

Between 1528 and 1593 the Main Sacristy, the Chapterhouse, the Royal Chapel were built and the Sacristy of the Chalices and the Alabaster Chapels were completed, work that was carried out by Diego de Riaño, Martín de Gaínza and Asensio de Maeda.

Finally, in the period between 1618 and 1758 the Baroque Cathedral was developed; which included the Church of the Sagrario, under the direction of Miguel de Zumárraga.

What to see in Seville Cathedral

We began the visit to the exterior of the Seville Cathedral by contemplating the Giralda; a 94-meter high tower built between 1184 and 1198 by Ahmad Ben Basso. Its four fronts are totally different and the ornamentation is based on the characteristic geometrical games in Mudejar brick (sebka). The Christian bell tower is superimposed on the minaret without altering it, being conceived by Hernán Ruiz the Younger (1558) in the times of the Asturian archbishop Fernando Valdés Salas; it was he who ordered it to be crowned with a statue of La Fe (bronze weather vane cast in Triana by Bartolomé Morel, 1568 known as Giraldillo) which reaffirms the commitment of the Church of Seville to the Counter-Reformation.

Numerous entrances to the enormous temple were built: three monumental doors at the feet (Baptism, Assumption and Nativity), two in the transept (Saint Christopher and the Conception) and the other two at the head (the Puerta de Palos or Adoration of the Magi door and the Puerta de las Campanillas door). In addition, there is an entrance to the Patio de los naranjos (Puerta del Lagarto) and another one that connects with the Church del Sagrario (Puerta del Sagrario). There is also the Puerta del Perdón which leads to the Calle de los Alemanes.

The Patio de los Naranjos is totally integrated into the Cathedral, but it still exhibits part of its previous construction, like the ablutions patio of the primitive mosque. 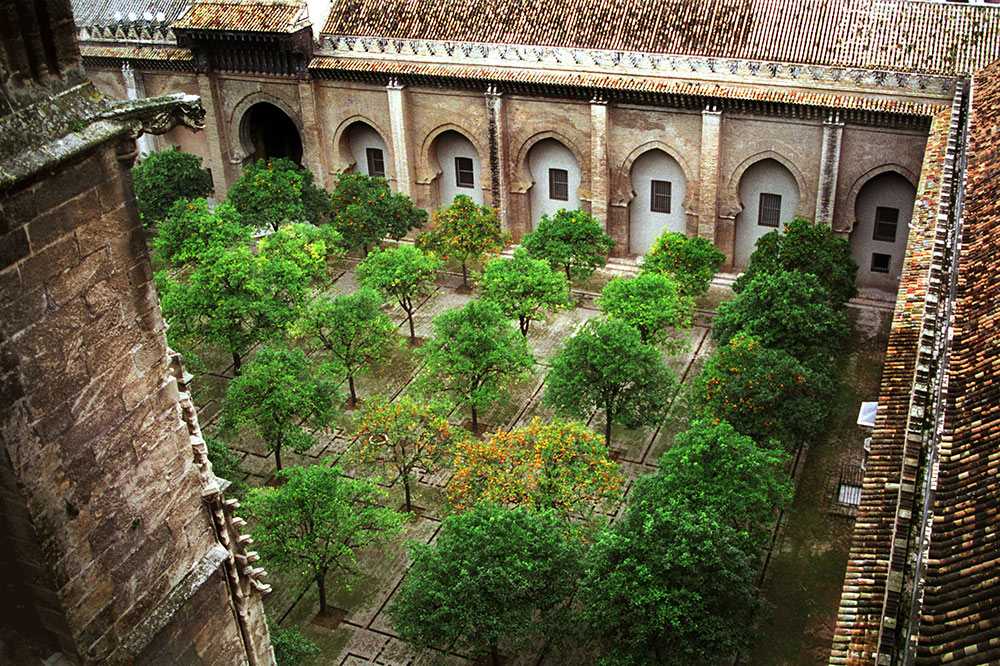 In the central nave, covered with ogival vaults, is the choir. The chapel is surrounded by high bars and among them is the transept, with the highest and most starred vaults, which reach 37 metres in height. Next is the transcorum and the Royal Chapel.

The Main Chapel stands out for two grandiose works: the grille of the presbytery, a Plateresque work by Francisco de Salamanca (1518-1529) and the main altarpiece. The chapel was started by Pedro Dancart (1482) and finished in the 16th century by the brothers Jorge and Alejo Fernández. Around 1550 two more streets were added to the seven already existing ones with sculptures by Roque Balduque and Juan Bautista Vázquez. It is 18 metres wide and almost 20 metres high and includes dozens of sculptures relating to the life of Christ and Mary. It is made of polychrome wood and the famous Christ of the Million (14th century) is on top. The silver-plated effigy of the Virgin of the See, the patron saint of the Cathedral, also stands out.

The traditional Danza de los Seis is still performed in the presbytery; where a dozen children or choirboys dress up in 16th century pages to perform sacred dances before the Holy Sacrament.

In the trasaltar there are fifty Gothic, Renaissance and Mannerist sculptures from the 16th century. The choir, closed by a grille by F. Salamanca (1518-1523), contains the immense ashlar, with 117 seats and carved in ebony wood in 1511. Its main teacher was Nufro Sánchez. At its center there is a lectern for singers, an excellent work by Hernan Ruiz the Younger. Its retrochoir Baroque, built in marble and jasper, was sculpted between 1619 and 1635 by Miguel de Zumárraga, and is presided over by a 15th century panel of the Virgen de los Remedios.

The organs have superb 18th century cases and sculptures by Pedro Duque Cornejo, although the current instrument is by Aquilino Amezúa (1901).

The magnificent Main Sacristy (16th century) has a rich plateresque ornamentation. In the Royal Chapel (16th century) are kept the mortal remains of King Alfonso X the Wise and his mother Beatriz de Suabia. The altarpiece includes the Gothic image of the Virgin of the Kings, patron saint of the city. At her feet is the Baroque silver urn carved by Juan Laureano de Pina- with the remains of San Fernando. In addition, in the crypt are buried Pedro I of Castile and his wife Maria de Padilla; there is an exquisite Virgin of the Battles, made of ivory in the 13th century.

The antechamber and the chapter house (from the end of the 16th century), with a vault decorated by Murillo, are the work of Hernán Ruiz the Younger. It contains a good number of religious paintings from the 15th to the 19th century; including the famous painting by Goya of Saints Justa and Rufina, the sisters born in Hispalis who were martyred for not renouncing Christianity (3rd century) and who are the patron saints of Seville and of the potters’ guild. 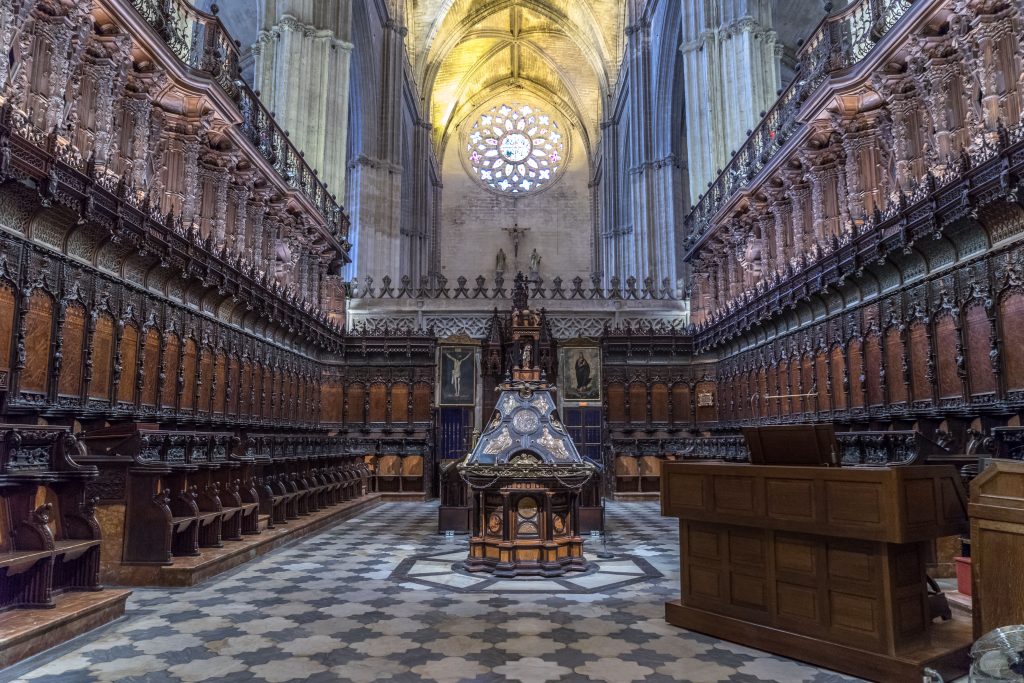 Choir of the cathedral

Church of El Sagrario (17th century) is actually a temple integrated into the Cathedral and has a rich interior in which the main altarpiece by Francisco Dionisio de Ribas, with carvings by Pedro Roldán, stands out.

The four Alabaster Chapels (16th century) are located on the side walls of the choir. The most important one is that of the Immaculate; famous for keeping the wooden image sculpted in 1631 by Martínez Montañés; it is known as the Cieguecita because of its low gaze, with the eyelids barely open.

On the south side are the Mariscal Chapel, with an altarpiece by Pedro de Campaña (1555); and the San Andrés Chapel, which exhibits the very important Cristo de la Clemencia by Martínez Montañés (1603).

Among the western chapels is the altar of Nuestra Señora de la Cinta, whose sculpture is by Lorenzo Mercadante (1470) and in the north the baptismal chapel of San Antonio, where the vision of San Antonio de Murillo is kept. 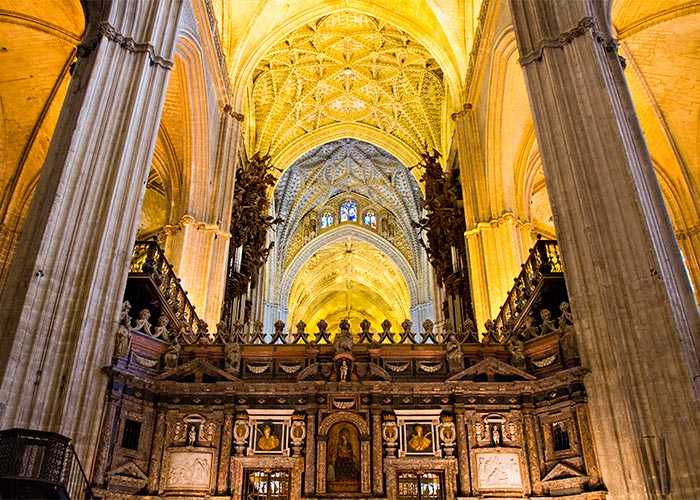 The cathedral from the inside

The Seville Cathedral has more than eighty stained glass windows from the 14th to the 20th century.

In the Casa de Cuentas, today known as the “Ornament Room”, the income and assets of the Chapter were controlled; it shows the Banner of San Fernando with which the king entered the city on November 23rd 1248. Since 1255 that day a Procession of the Harrows or Procession of the Sword has been held; in which a relic of Saint Ferdinand, the mentioned banner and the Lobera sword are carried.

In the Cathedral Treasury stands out the Silver Custody made by Juan de Arfe (1587). It measures 3.25 metres high and contains 350 kilos of silver distributed in five bodies; it is crowned by a statue of La Fe (the Faith).

Another of its most relevant gems is the set of 13th century Alphonsine tablets; given as a gift by King Alfonso X the Wise. On the other hand, Columbus’ son, Hernando, gave to the Cathedral the Columbus Library; which includes the Book of Prophecies written by Christopher Columbus himself in 1504. The Chapter Archive also holds the famous Imago Mundi by Pierre d’Ailly and the Castilian Grammar by Antonio de Nebrija.

Among the funerary monuments of the Cathedral is that of Columbus, due to Arturo Mélida (1891); who came from the Cathedral of Havana and settled in 1902 in the southern arm of the transept.

Chargeable parking in Avenida de Roma and near the bullring, in Calle Almansa and in Paseo de Colón

Holy Week (of International Tourist Interest), San Fernando (on 30 May the religious, civil and military feast is celebrated inside the Cathedral and on that day the urn with the uncorrupted body of King San Fernando remains open), Corpus Christi (the procession leaves from the door of San Miguel of the Cathedral with several images stored there and After the tour, he enters again through the Puerta de Palos), Festividad de la Inmaculada (on December 8 there is a pontifical mass at the high altar and the group of singing children dance the Dance of the Sixes for a week as well as for seven days after Corpus Christi)

Andalusia, cathedrals, Seville
It may interest you...