Huesca: a city of heroes and kings

In this historic, small and nice city is combined the modern comfort with the traditional taste of the old collection of historic buildings and its excellent gastronomy.

Plan your trip to Huesca

There are just two main monuments that will justify your trip to Huesca. These are the Cathedral of Santa María and the Monastery of San Pedro el Viejo. There also are some public spaces. It is a first-level holiday destination that is not as popular as it deserves. Together with the remains of the castle of Montearagón, 7 kilometres far from the city centre, a full trip to Huesca takes a whole weekend.

We also recommend to visit the nearby Sierra y Cañones de Guara Natural Park. There are also other options such as the castle of Loarre and the Mallos de Riglos. Due to the reputation of the restaurants, lot of people go there just to eat there. Find out here the local cuisine in the websites about where to sleep and where to eat in Huesca.

Finally, Huesca has an amazing gastronomy. Lot of people go there every weekend to enjoy the restaurants since they have a good relation quality/price. When is the time, there is a huge variety of amazing mushrooms.

The origin of the city is a Celtiberian village named Bolskan. Romans developed it and called it Urbs Victrix Osca (which means Huesca, a victorious city). During the final stage of the Roman Republic, Osca became popular.

Huesca was the residence of one of the first “hispanic” heroes, in a romantic sense. He was the soldier and politic Quinto Sertorio, who was born in the current country of Italy. From Hispania he kept a bloody war against the Roman senate led by Sila. In 72 B.C. when the war became against him, he was poisoned by its collaborators in a banquet celebrated in his villa of Osca.

It was a very active period in the area overall. Even silver and copper coins were minted with the name of the city.

Muslims called the city Wasqa and walled it in the 9th century. It was the northest city of Al-Andalus. It was usually assaulted by French Counts loyals to Charlemagne emperor. Fortifications saw how the King Sancho Ramírez de Aragón died, who felt on the field of the battle trying to cross these fortification in 1094.

However, two years later, after the Battle of Alcoraz was conquered by the new king, Peter I. During the war San Jorge made a miracle appearance, and then became the Patron Saint of Aragón.

Courts of the kings

The city of Huesca hold the court of the Kings of Aragón for years. Thus, it was very related to the crown. That is why the popular Alfonso I the Battler asked for being buried in the castle of Montearagón. Later, Monk Ramiro II ordered to be buried in the Monastery of San Pedro el Viejo. As the residence of the Royal Family was Huesca, three kings were born there: Queen Petronila, Alfonso II (who would build his palace inside the city) and Peter II.

In 1135 took place the popular episode of “La Campana de Huesca” (Huesca’s bell). King Ramiro II of Aragón called some noblemen candidates. The aim was to build a bell that make such noise to be heard around the whole kingdom. He brought the rebels into a room where he beheaded them one by one, stifling the rebellion and offering a lesson of strength to their opponents. Another interesting episode happened in 1247.  A court session was hold that had as a result the first official compilation of los Fueros de Aragón (Aragonese own code of laws). This document worked as a basis of the law after the kingdom and the crown of Aragón.

Because of its foundation in 1354, the University of Huesca is one of the oldest in the Iberian Peninsula. It had five faculties: theology, civil law, canon law, medicine and arts. These were definitely consolidated during the 16th and 17th centuries. During those years the city lived a period of great economic, social, artistic and demographic development.

In the 18th century, after the War of the Spanish Succession, the city of Huesca hosted many students coming from Catalonia since the Nueva Planta decrees had closed the catalonian centres and Huesca was the closest city. This University closed in 1845. Since the end of the 19th century, population began some urban remodellings and modern works. By this way they shape the current city structure.

Best places to visit in Huesca

This small old town is built around its historic city centre. A huge part of the must see places is delimited by the presence of “el coso” (a really long street) and the walls. Muslims built them and most of them dated from the 9th and 10th centuries.

It only remains a stretch between Joaquín Costa street and the bullring at the present time. You can visit it since it has been restored. At the beginning the building had 9 doors and a hundred of vigilance towers. The Torreón del Amparo and the Puerta de Montearagón or San Agustín, most known as “La Portela” are the ones that still stand. 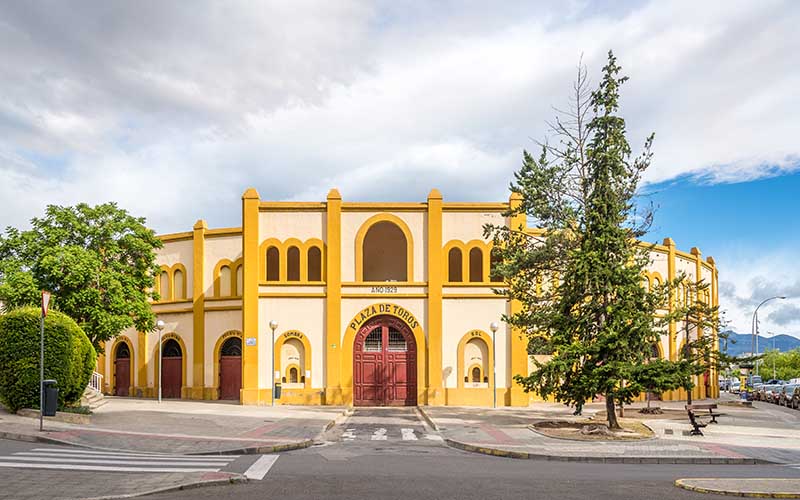 Sourroundings of the main square

Another location to go in Huesca is the Plaza de Navarra. In its centre it is the Fuente de las Musas, dating from the end of the 19th century. Moreover, in its extreme is one of the most representatives buildings in Huesca: the Casino. 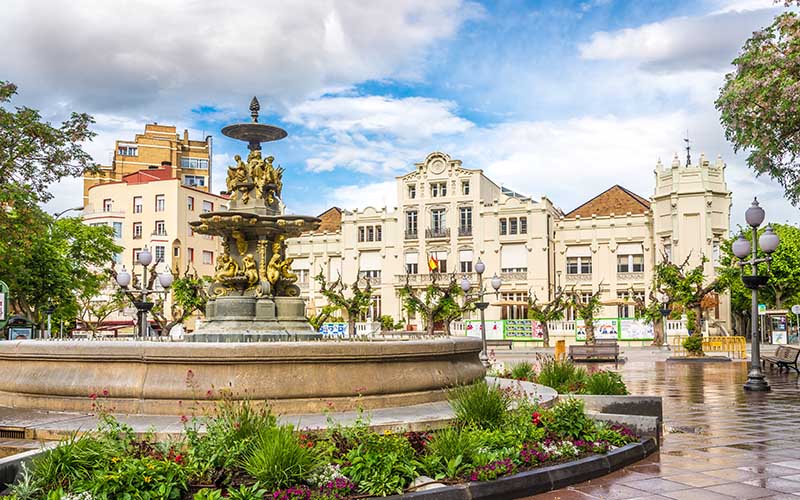 It was built at the beginning of the 20th century and designed by Catalan architect Ildefonso Bonells. Therefore, it is not weird that the casino it is considered the main modern work in Huesca. Its white facade has a geometric structure that remain us a medieval castle. The Casino is also famous because of its beautiful entrance gate and the luxury lobby. Its Rojo and Azul living rooms or the main staircase have not gone unnoticed. This staircase is decorated with a bust of the local politician Manuel Camo mady by Sebastián  Miranda.

On the remains of a Roman temple, a Visigothic church and a Muslim mose the Cathedral of Santa María was built in the 13th century. After so many remodellings got its current Gothic aspect. In its facade, and protected by a great eaves, it is its pediment. This cathedral is one of the attractives of Huesca. The facade crowned with a gable has three archivolts decorated, the exterior one with diamond tip. The central one has O-ring mouldings and the interior is voussoired with exempt Zamorano rolls on the outside. 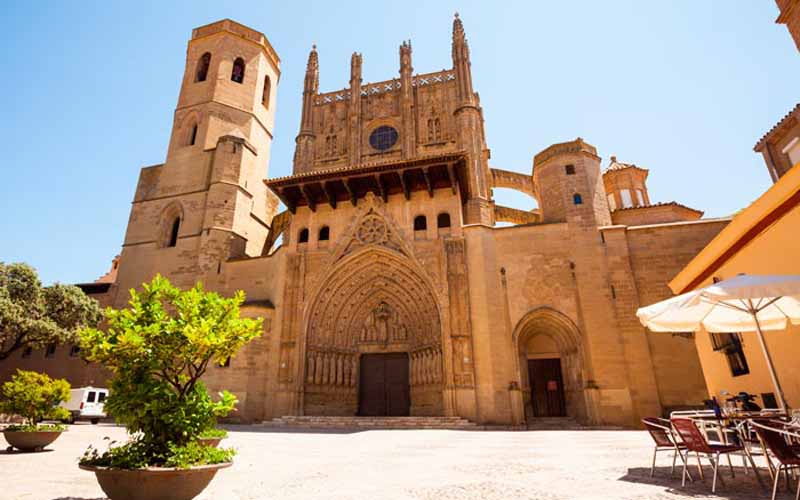 You should also visit the Gothic cloister of Papa Luna. The space keeps the northern bay of the Romanesque cloister and part of its southern bay integrated in the museum. They are also preserved the remains of the entrance gate to the tower of the old mose of the Medina de Huesca. On the other hand, the major altarpiece of alabaster is also interesting. It was built at the beginning of the 15th century by Damián Forment. The author, to commemorate himself, had his portrait painted in the inferior part. Annexed to the church is the diocesan Museum, that holds a great collection of sacred art. Its  most representative piece of work is the main altarpiece of the castle of Montearagón.

In front of the cathedral is the City Council (16th century). It is a representative building of the Renaissance from Aragón with two symmetrical towers and a great eaves upstairs. It keeps in its interior the famous painting La Campana de Huesca (1874), a great piece of work by painter José Casado del Alisal. 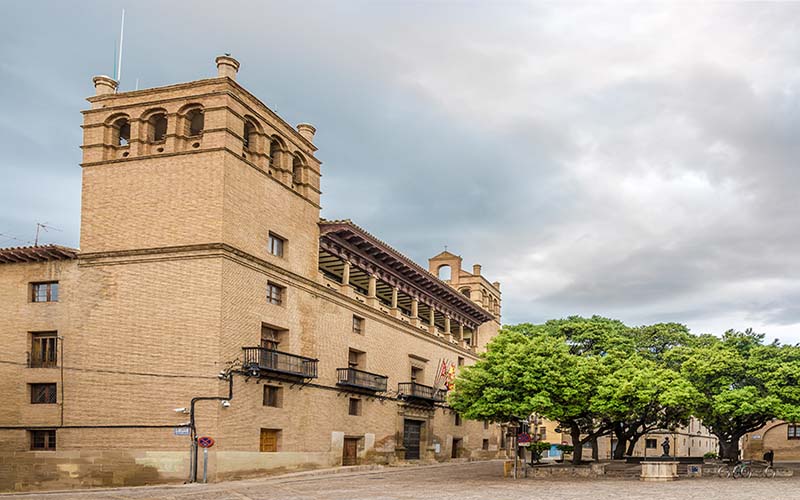 The museum also holds the canvas by Casado del Alisal and other the Busto relicario de San Lorenzo, Patron Saint of the city. It was made on silver at the end of the 16th century and it is kept in the Basilica of San Lorenzo. This Baroque temple, built between 1608 and 1703 over a Gothic Church, had an unlucky constructive history. The lack of economic resources made that sometimes citizens and workers built it with their own money. Its major altarpiece, from 1678, is an artistic treasure of the Baroque. 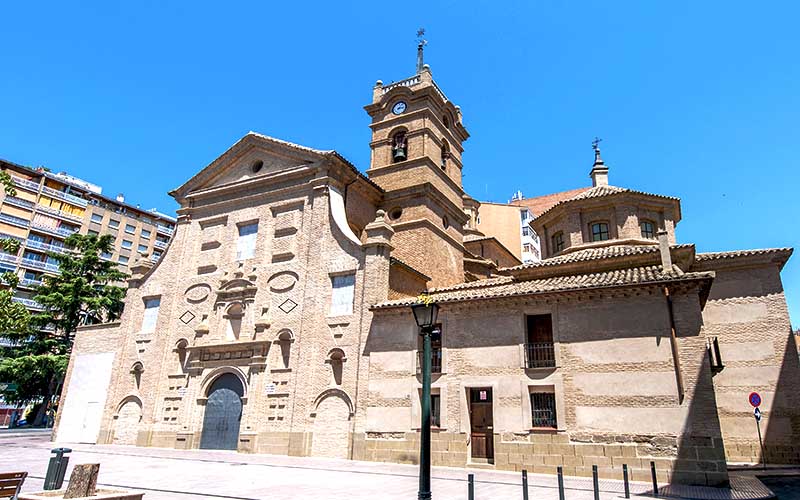 The Monastery of San Pedro el Viejo, from the 12th century, is one of the main collection of historic buildings most important from the Romanesque from Aragón. It remains the Romanesque cloister that holds the burial place of the kings Alfonso I the Battler and Monk Ramiro II. 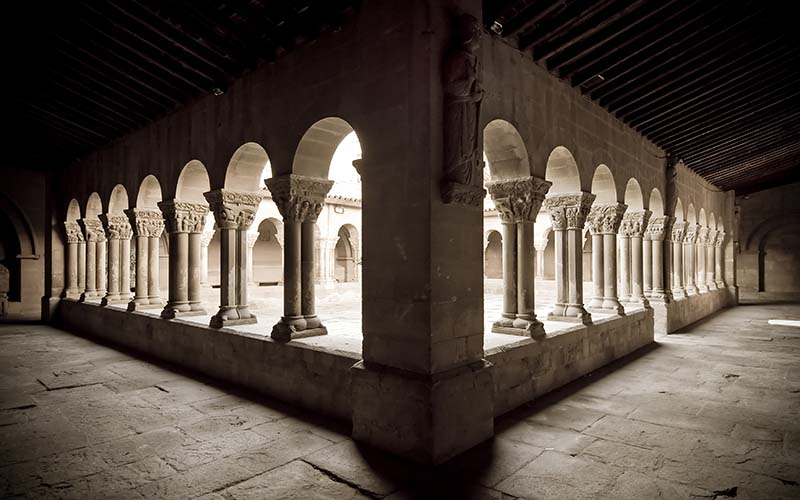 Another important convent to visit is the one of San Miguel. It belongs to the Carmelites, most known as “Las Miguelas”, founded in 1110. During the Medieval Age was an important hospital, a leprosarium and even a hangout. There met the council till the end of the 15th century. The tower, the central nave and two chapels next to the chancel are built in a Romanesque style, meanwhile the east end is Gothic. The Bridge of San Miguel (1912) is situated very close, over the river Isuela. It is important since it is one of the first suspension bridge in our country.

As a curiosity, Huesca has the oldest grocery stores in Spain: Ultramarinos “La Confianza”. It is another example of the Modernism and it was opened in 1871. This shop window is still a pilgrimage spot among the curious visitors and the inhabitants.

The headquarter of the old University is now located in the Museum of Huesca. It exhibit samples of the different cultures that inhabited the city in two main different sections, Archeology and Fine arts. In addition, it also includes among pieces of work, lithographs of the series “Los toros de Burdeos” by Francisco de Goya and the complete works of Ramón Acín. The building was also the kings of Aragon residence. It remains the Salón del Trono, Sala de Doña Petronila and Sala de la Campana. Lastly, it is worth to mention that it was the scenario of the legend of the Campana de Huesca.

In Luis López Allué square, the current Plaza Mayor, it is the Educational Museum of Aragón. Its collections include a tour over the history of the spanish education in the 20th century. A moderner building is the centre of Art and Nature (CDAN), by Rafael Moneo. It is managed by Fundación Beulas created in 2000 and it holds the collection of Contemporary art Beulas-Serrate with works of the avant artists and the Grupo “El Paso”.

INDOC it is also important, it is a place that investigates about the relation between art and nature, the public art and the studies about landscapes. In the city centre there is lot places to visit. The Park of Miguel Servet occupies a great amount of field. It holds several vegetal spices and ponds. There is the famous sculpture of Las Pajaritas by Ramón Acín. 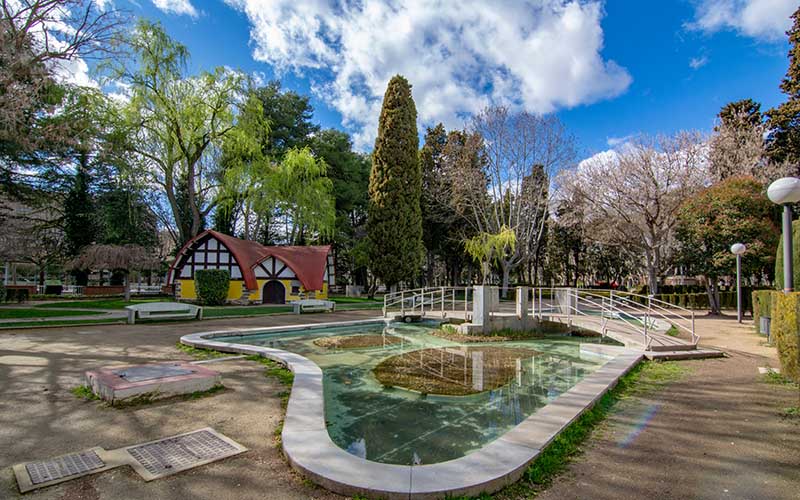 Along Martínez de Velasco avenue and around Doctor Artero avenue.