The Community of Aragón is the territory, within the European Union, with the lowest number of inhabitants per square kilometre. This, despite its demographic disadvantages, also means that there are plenty of places where you can enjoy peaceful getaways in almost unknown places. In addition to this peace, medieval architecture, history and the Pyrenean landscapes are other reasons to visit Aragón, whether in Huesca, Teruel or Zaragoza. 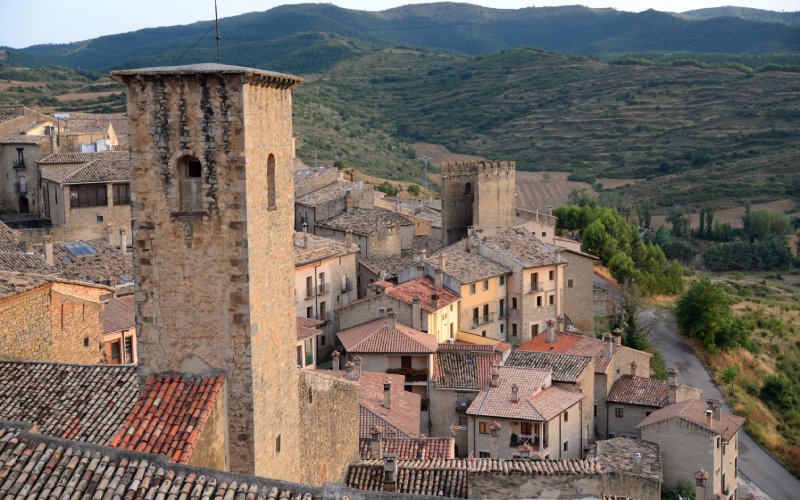 The castle of Sos del Rey Católico is the one that gives name to the village. | Shutterstock

The journey through the most beautiful medieval towns in Aragón begins at a location in the northwest of the community: Sos del Rey Católico. With a population of less than six hundred inhabitants, this village, which belongs to the Cinco Villas region, is characterised by its beautiful houses built in stone. The name of the village comes from the castle that is located on the highest part of the village. In this village of paved roads, the numerous gates distributed by the wall that surrounds Sos del Rey Católico call the attention of its visitors. An ideal time to visit this village in the north of Aragón could be August; when the medieval market takes place. 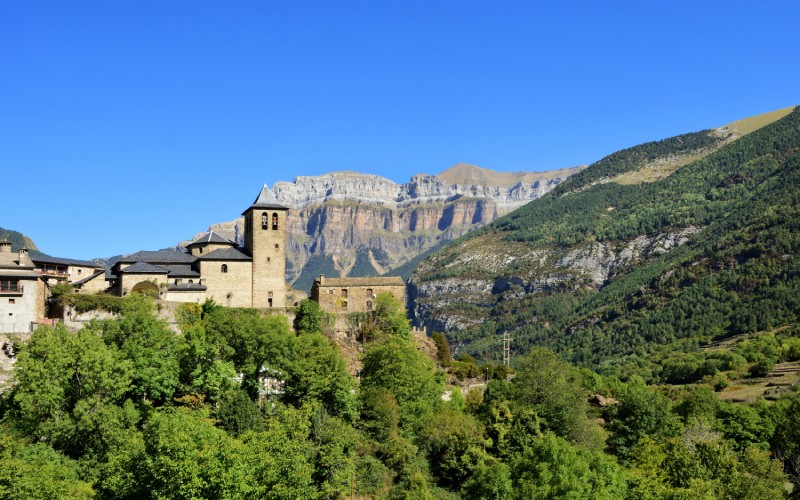 Torla is the perfect destination for hiking lovers. | Shutterstock

It may be one of the most attractive towns in the community of Aragón. It is located right at the entrance to the Ordesa y Monte Perdido National Park, so a visit to it is advisable for nature and hiking lovers. For those who come to Torla, there are two essential places in the urban area. The church of San Salvador, of Romanesque origin and later restored, provides impressive views of the surrounding countryside. The other mandatory stop in Torla is the Plaza Mayor; where you can visit a traditional house of the Alto Aragón built in the 13th century. 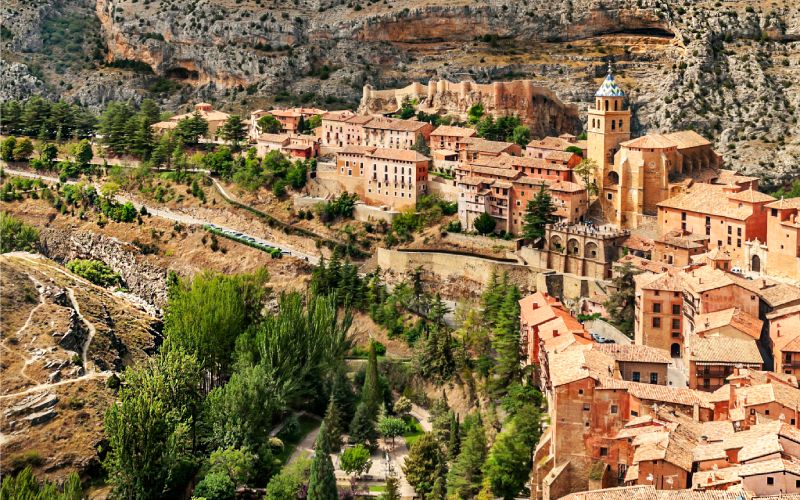 Visiting Albarracín is like travelling back to the Middle Ages. | Shutterstock

Its narrow streets, its stone houses and mansions and the rock on which it is built make visiting the town of Albarracín like travelling back to the Middle Ages. Situated in the central area of the community, this town imposes itself by its historical beauty and becomes a perfect destination for those who love places with memories. The ruins of a fortress stand on a cliff in the old town area. At the highest point of the town is the Andador Tower, which dates back to the 10th century. And, among other monuments and architectural curiosities, the bell tower of the cathedral of El Salvador, built in the 16th century, stands out, erected on the ruins of a Romanesque temple. 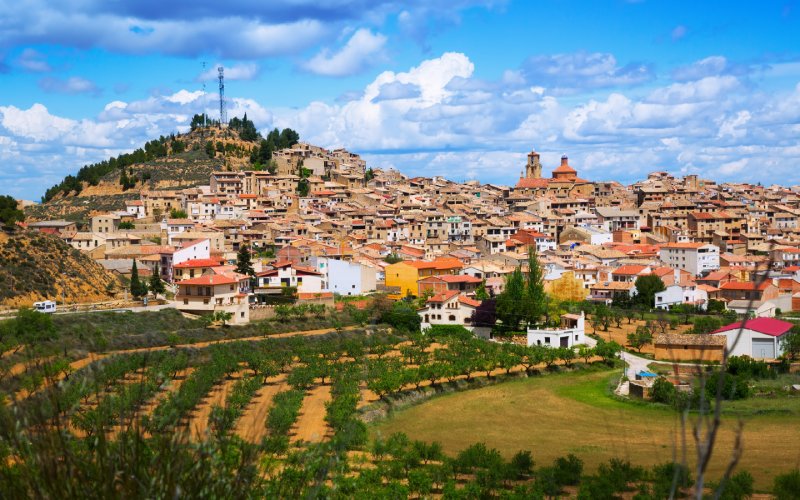 Calaceite stands out for its streets and stone houses. | Shutterstock

Close to the border with Catalonia is Calaceite. A town declared a Historic-Artistic Site in 1973 for its great beauty. Located in the region of the Matarraña, within the province of Teruel, its interior houses diverse treasures. Among them it emphasizes its Plaza Mayor, in which is a city council erected in 1609. Also it is necessary to emphasize his streets and the stone houses with balconies of forge; that abound in this municipality. The archaeological museum housed in Calaceite is another place of great interest; where you can see photographs and old tools, as well as painting exhibitions. 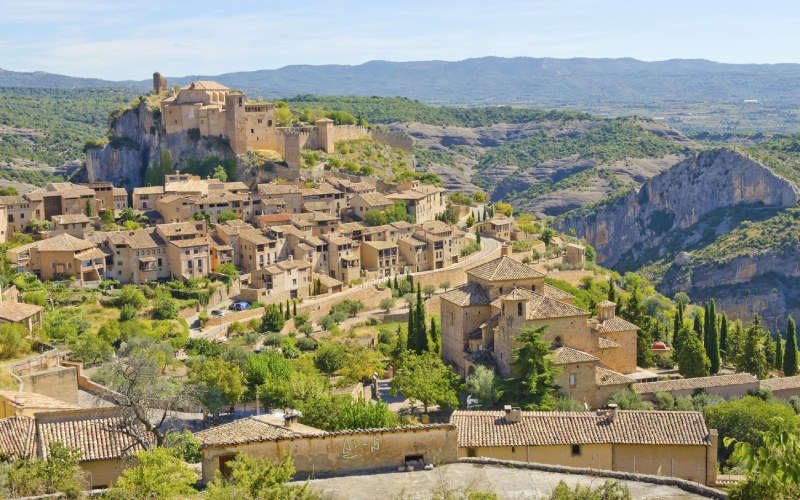 Alquezar is considered one of the most beautiful villages in Huesca. | Shutterstock

In the northeast of the Somontano region is Alquézar, considered one of the most beautiful villages in the province of Huesca and in Aragón. This medieval village has several places of interest, beyond the idyllic landscape that surrounds it. Its old town, which has a Gothic style door, is one of its signs of identity. Thus, for those who already know its Plaza Mayor or the Ermita de Nuestra Señora de las Nieves, they still have the option of taking the route of the Pasarelas and discovering the mountains that surround Alquézar, from the outer Pyrenees Mountains to the Ebro Depression, passing through the southern slopes of the Sierra de Sevil. 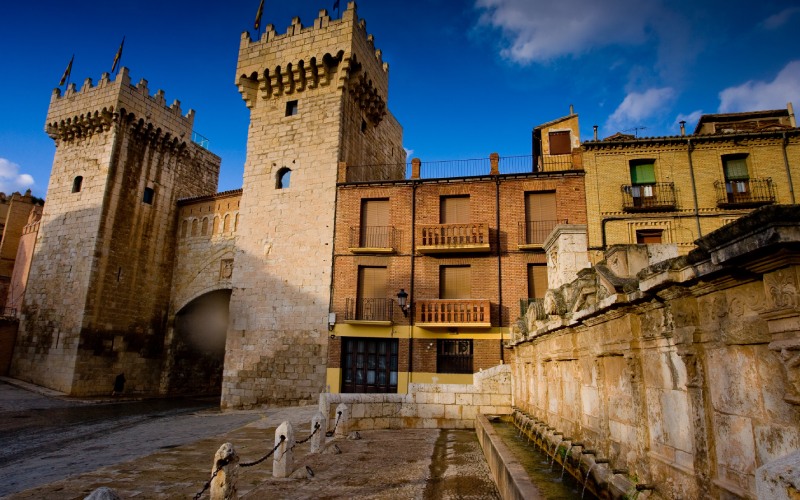 The castles and walls of Daroca make a visit to this village a must. | Shutterstock

This is the capital of the Campo de Daroca region, located in the province of Zaragoza. On the banks of the Jiloca River, Daroca has imposing walls built between the 13th and 16th centuries. The walled complex is a total of four kilometres long and is almost entirely preserved. It also has impressive structures inside, such as the Castillo Mayor or other smaller but equally interesting constructions, such as the Castle of the Jewish Quarter, the fortification of San Cristóbal or the Puerta Alta and Puerta Baja, located at the ends of the Calle Mayor. 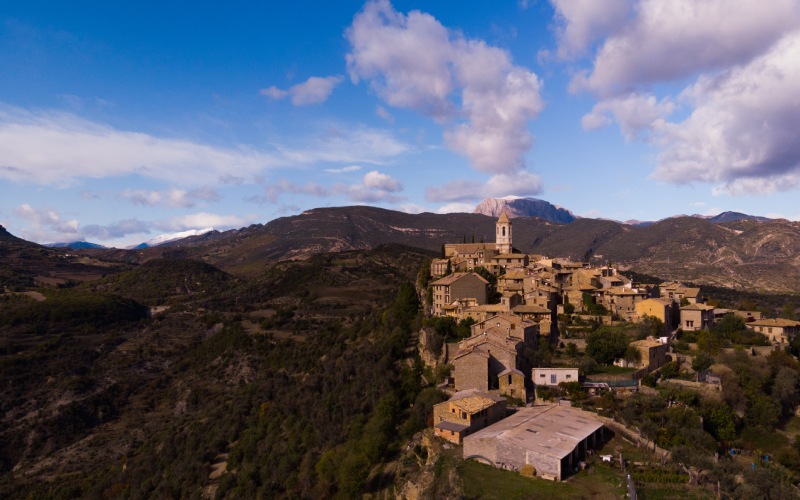 Roda de Isábena has the honour of being the smallest town in Spain with a cathedral. | Shutterstock

If there is one thing that stands out about Roda de Isábena, it is that it is the smallest town in Spain to have a cathedral, specifically that of San Vicente Mártir. The walls of this town speak of its turbulent past; marked by numerous conflicts and revolts that led to continuous reconstruction and remodelling. In spite of the innumerable thefts that its heritage has suffered over the years; and because of so many conflicts, Roda de Isábena continues to preserve one of its great treasures: the Chronicle of Alfonso III, which is kept inside the cathedral. But the beauty of this town is not only architectural. One of its greatest attractions is the natural landscape that can be seen from its viewpoints. 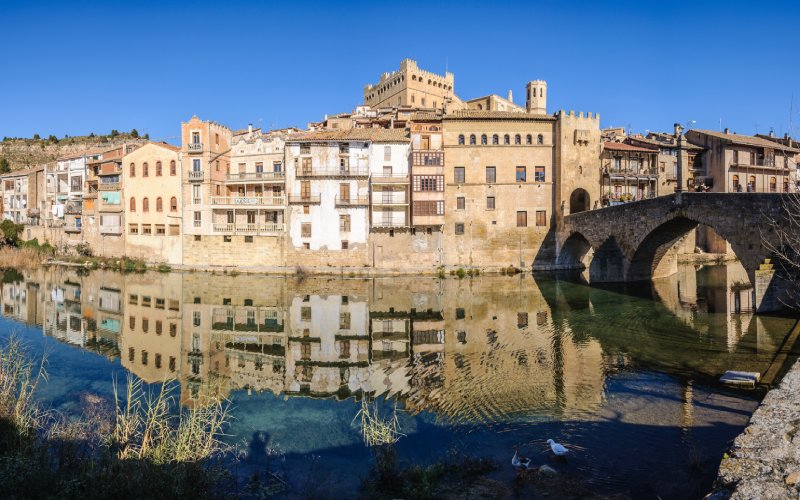 Valderrobres and its gothic architecture are considered to be of cultural interest. | Shutterstock

Also in the Teruel region of El Matarraña is located one of the most beautiful villages in Aragón: Valderrobres. Its imposing architecture, mainly of gothic style, has been worth the consideration of Site of Cultural Interest. One of the most attractive stops of this peculiar Aragonese town is the medieval bridge located on the Matarraña river, from where a panoramic view of all the town can be obtained. In addition, during a stroll by Valderrobres it is essential to visit the church of Santa Maria la Mayor. This construction dates from the 14th century and calls the attention, specially, by the rosette of its facade. Next to this church is the Castle of Valderrobres, one of the most recognisable monuments of the region. 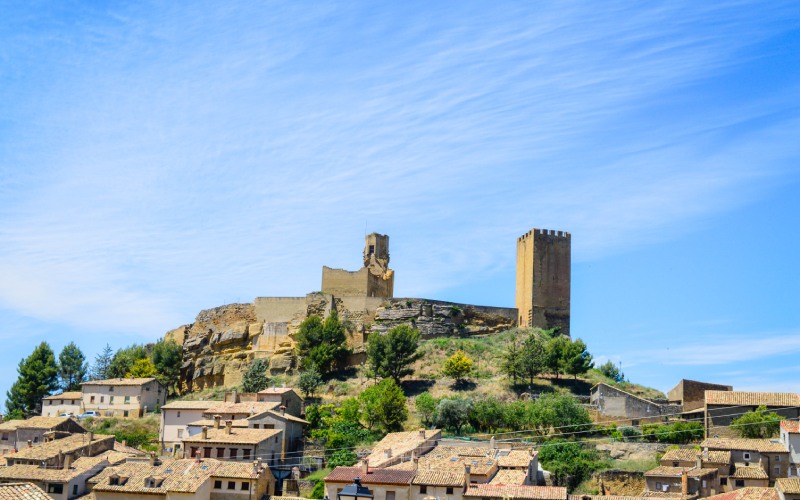 Uncastillo is one of those places that are suitable for hiking. | Shutterstock

For those who love medieval architecture, Uncastillo is an ideal place to spend the day in Aragón. The magnificent state of its buildings helped it to achieve the status of Historic-Artistic Site in 1968. Among the constructions inside, the Town Hall, the Palace of Martín el Humano and the Church of Santa María la Mayor, built in the 12th century, stand out. Although it is not only the work of its inhabitants that is worthwhile. Uncastillo, located in the Cinco Villas region, is in the basin of the river Riguel. A perfect territory for hiking where the impressive views of ravines abound, such as La Petilla or Las Anas. 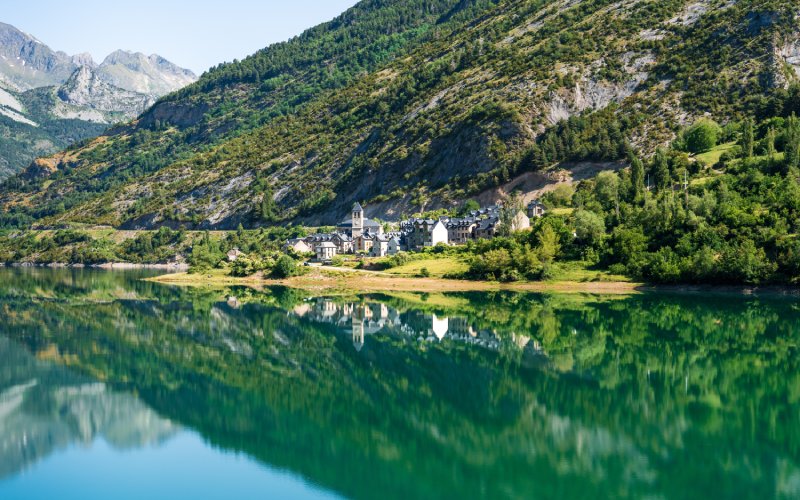 Lanuza, surrounded by a lake, has one of the most impressive views in Aragón. | Shutterstock

Another essential stop on this journey through some of the most beautiful villages in Aragón is Lanuza; a town in the Alto Gállego region of Huesca, in Aragón. The village’s name comes from a Celtic Latinised word meaning hillside, which accounts for its rugged location. The landscape surrounding the village is of a striking beauty; as Lanuza has a reservoir on its left side. The town’s cattle-raising past still continues today, among other things, thanks to the performance of the Palotiau; a male dance marked by its pastoral and warrior character. Another of the outstanding festivals in this Lanuza is the Festival Internacional de las Culturas Pirineos del Sur, which takes place every July and has a floating stage on the local reservoir. 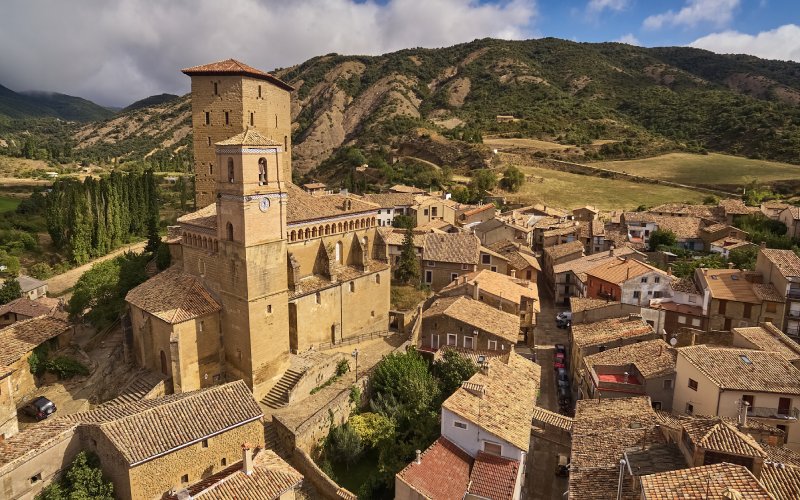 To the northwest of the town of Zaragoza you can find another town with great charm: Biel. It is a town integrated within the Cinco Villas region, which has a population of less than 200 inhabitants. Biel has an old town made up of several Romanesque style buildings. Among them, the Biel Castle stands out; which, according to tradition, was given as a dowry by King Sancho Ramírez to his wife Felicia de Roucy. In this small village, Jewish quarters are mixed with churches and hermitages, as a consequence of its medieval origin and its historical multiculturalism. In addition to the Jewish Quarter, a visit to the main church of Biel is a must, which was reformed in the 16th century and today brings together the Gothic and Renaissance styles.