On the borders of the provinces of Burgos and Álava awaits one of the great natural spectacles of the country. Flashing, the Salto del Nervión falls from more than 220 metres into the void. The karstic environment of the spot where it is located, Monte Santiago, guides several streams to converge at this point. Several viewpoints and routes allow you to see a landmark that is not always there. When the rains cease, the waterfall disappears, something that usually happens every summer. However, when the riverbed is strong, the postcard is impressive. 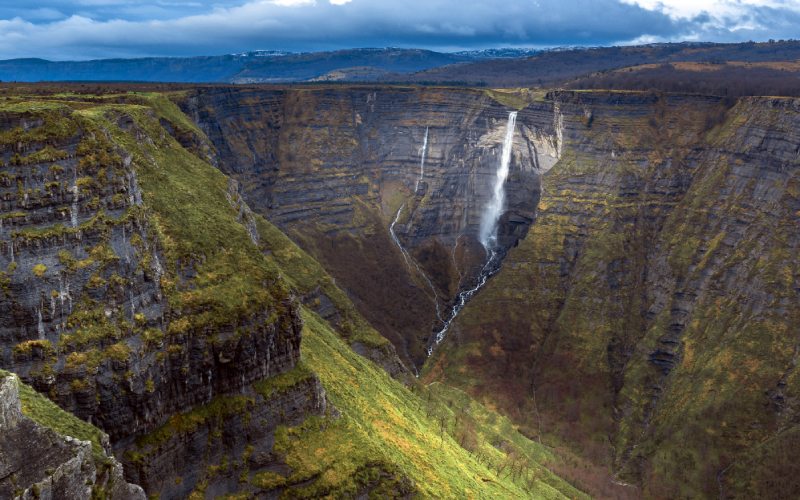 Bottom of the Delika Canyon. | Shutterstock

A high combination in the Delika Canyon

Monte Santiago is halfway between the northern cliffs and the plateau. The karstic action, a dissolving erosion of the rock, is responsible for the impressive panorama that this Natural Monument presents. Thanks to it, caves and underground watercourses have been created. In turn, these are the ones that give rise to the Salto del Nervión.

Several streams in Álava run through this source, but it is from the waterfall that the river is known as the Nervión. From there it enters the Basque Country until it flows into the famous estuary that divides Bilbao into two banks. There is little to do with the final, industrial landscape that you see at its source. Very deep, the Delika canyon is the gorge that runs the first metres of the well-known course. 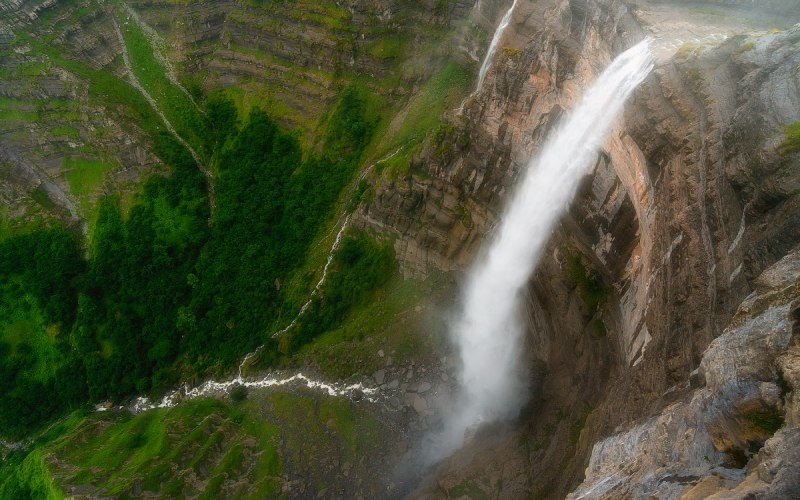 Mixing beeches with low vegetation, the months when the waterfall is active also coincide with the most beautiful months of the canyon. Whether it is the autumn ochres, the spring greenery or the winter snow, in any case the colour palette is very attractive in combination with the vertical stone walls.

The complex stands out not only for its vegetation and orography, but also for its fauna. The most striking birds of prey are the griffon vultures, which are very large. But they are not the only ones, as golden eagles, Egyptian vultures and peregrine falcons are also frequent visitors. From the aquatic environment, the great variety of amphibians tied to the source of the Nervión stand out. Meanwhile, the wolves are left lying around sadly. These are the “loberas”, places specially designed for hunting them. They consist of pits about two metres high into which they fell as a result of the shepherds’ tricks. 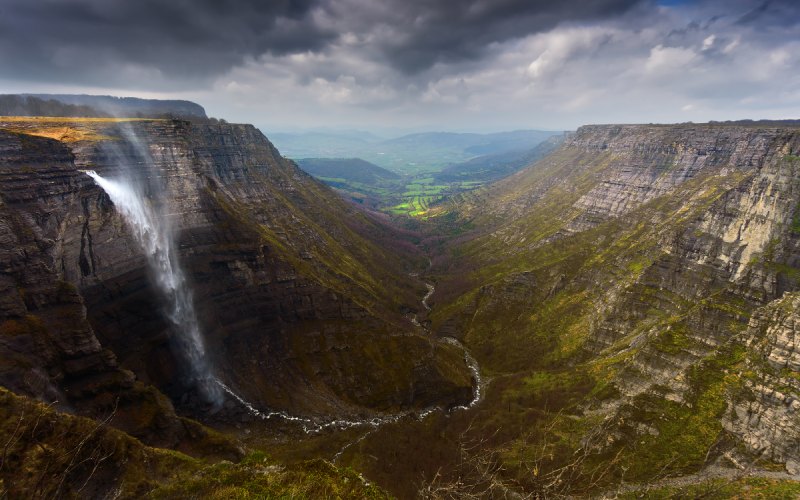 Salto de Nervión from above

There are two main alternatives to see the Salto del Nervión. One is from the top and the other from the bottom. The most common is the first, as it has several car parks to adapt the route to any difficulty. There are three, the first being at the entrance to the protected natural area. From there, there are about 9 kilometres to the waterfall’s viewpoint, counting from there and back. The second car park is a six-kilometre walk and the third is a four-kilometre walk. This is the one where it is most difficult to leave the car. 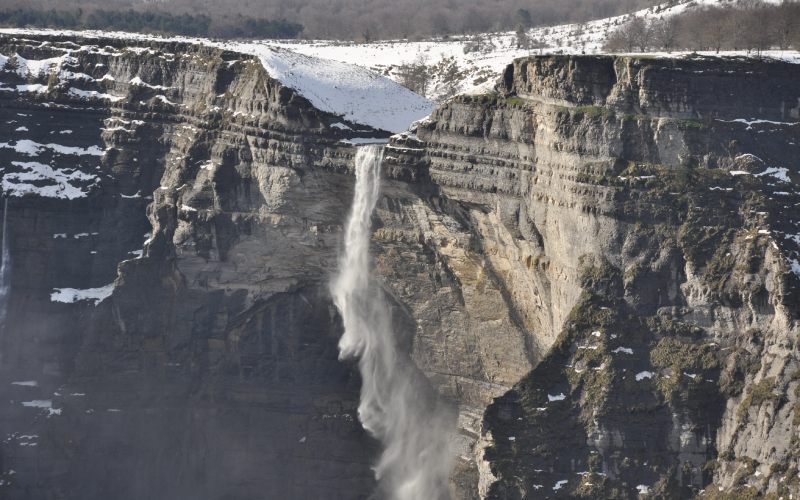 In any case, from the last parking place, the route is the most convenient, as it only takes half an hour. Anyway, there are more than a dozen well signposted routes throughout the Natural Monument, giving options to those who want a greater challenge. This walk passes through a beech forest in a comfortable way. You can see a restored wolfhound, including statues. It should be noted that to beat these animals, distractions were used to make them flee in a guided manner until their perdition.

Likewise, you can pass by the Fuente de Santiago, a very colourful cave emergence. The final point is the viewpoint of Salto del Nervión. From here you can see the waterfall from above, which gives you a great feeling of vertigo. The effect is much greater in the heavy rainy season, when the flow can be overwhelming. If you want to walk a little further, there is the possibility of taking the circular route by going to the so-called viewpoint of La Esquina de Rubén. In this case, the kilometres would be less than four to seven and a half. 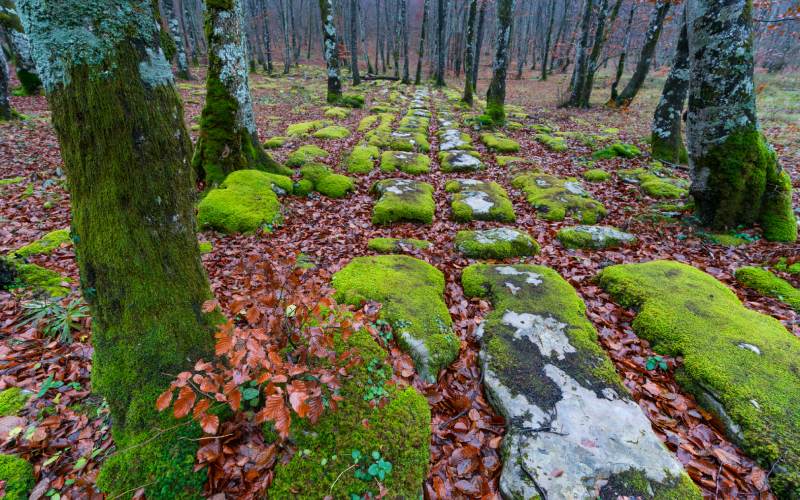 If it has gone up before, it now plays down. The route starts from the village in the municipality of Amurrio, which gives its name to the canyon into which the Salto del Nervión falls, Delika. The route is a little less than eight kilometres long, round trip, with no significant difference in altitude, barely 200 metres. However, you must be aware of the state of the river. If you have many things with you, the path may be impracticable. The reason is that it is necessary to cross the river on several occasions. However, being foresighted is not a problem.

With your waterproof boots on and your car parked next to the bar called “Infiernos”, you take a path that soon ends up next to the river. Without any possible loss, you just have to go up the flow until you reach the area where the waterfall breaks. On the way you can see the change of level from flatlands to the enormous walls of the Delika canyon. An atmosphere that is partly reminiscent of the Pyrenean valleys that characterise towns such as Broto or Biescas. The final reward is a panorama as splendid as it is vertical. The gorge closes in a kind of circus, precisely where the waterfall takes place. 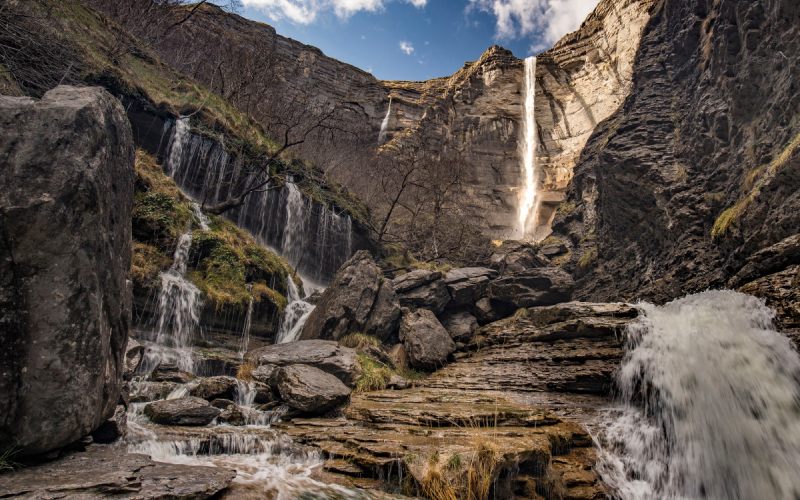 Once the trip is over there are many possibilities to complete it. Although the best known enclave in Álava is that of Treviño, Burgos’ territory, another is close by. This is Orduña, a Biscayan island in the province of Álava. It is a place with a rich heritage and an outstanding cuisine. Amurrio is also a nice alternative to spend the rest of the day. Likewise, following the natural side, Gorbea presents routes among which there is one that goes to another famous waterfall, the one in Gujuli. Despite not having the height of the Salto del Nervión, it also leaves impressive postcards with its 100-metre drop.