This large city, with an important port, has played an important role since antiquity. It was the setting for some of the best chivalry novels ever written in the world. It has modern and spectacular facilities, such as the City of Arts and Sciences.

Plan your trip to Valencia

Valencia is one of the cities that has developed the most in recent years. On the other hand, it has a large number of attractions throughout the year. Its extensive historical-monumental heritage and its diverse cultural spaces mean that there is a lot to visit in Valencia. Therefore, it takes a few days to visit the city.

In case you have more time, we recommend you to visit nearby places such as Cullera or Gandía. 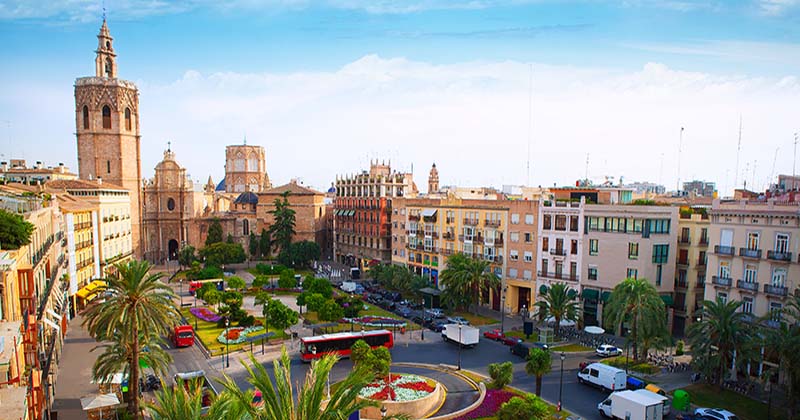 The area was inhabited since the 4th century B.C. But it was not until 138 B.C. when the Romans founded Valentia. However, it was destroyed in 75 B.C. during the civil war between Pompey and Sertorius. Around 554, the city was conquered by the Byzantines. In turn, the Visigoths expelled them in 625.

In the Muslim invasion of 711, they unsuccessfully besieged the place, agreeing to surrender with the Visigoths led by Agrescio. They named it Balansiya in honor of their Lord, Abd allah al-Balansi, son of Abd al-Rahman I. The Arabs began to develop irrigated lands and orchards that still subsist today.

After the decomposition of the Caliphate of Cordoba, the leader Abd al-Aziz founded the Amirí dynasty in 1021. The lineage ruled the Taifa kingdom until 1094. El Cid led the reconquest until 1099. His widow was in charge of evacuating the city in 1102, under pressure from the Almoravids.

This Muslim faction controlled the city until 1147, when it was taken by Mardanis, the famous mercenary known as the “Wolf King”. The year after his death, however, the city was taken by the Almohads. In 1238 Jaime I of Aragon recovered Valencia capital. As the Moorish uprisings intensified in the middle of the century, he exiled almost one hundred thousand Muslim inhabitants. The population was escorted to the kingdom of Murcia. He then made a distribution of land and granted privileges to attract settlers. 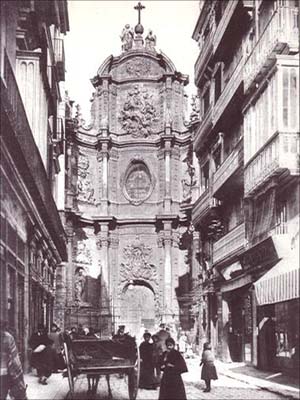 From the 15th century

Some of the most famous knightly struggles between noble lineages took place in the 15th century. Construction and cultural life intensified due to the prosperity brought by the silk trade and the first bankers. The guilds of the kingdom of Valencia uprose against the aristocracy and Muslims called Germanías. Nevertheless, it was crushed in 1522. During the 17th century, people suffered the consequences of the massive expulsion of the Moors, the epidemics and the overflowing of the Turia river in 1651.

During the Peninsular War the city resisted the French invader until 1812. It was then that Suchet took Valencia, remaining there until the following year. In 1814, Fernando VII disembarked there, beginning the absolutist regime. After that, in October 1840, the Queen Regent María Cristina abdicated there, going into exile.

In the last third of the 19th century its industry was boosted, with great importance of the export of oranges. In November 1936, due to the assault on Madrid by the Francoists, the capital of the Republic was moved here. On October 14, 1957, the Gran Riada del Turia took place, with more than 400 deaths. Finally, in 1981 General Milans del Bosch revolted the garrison against the Government in a famous coup attempt. 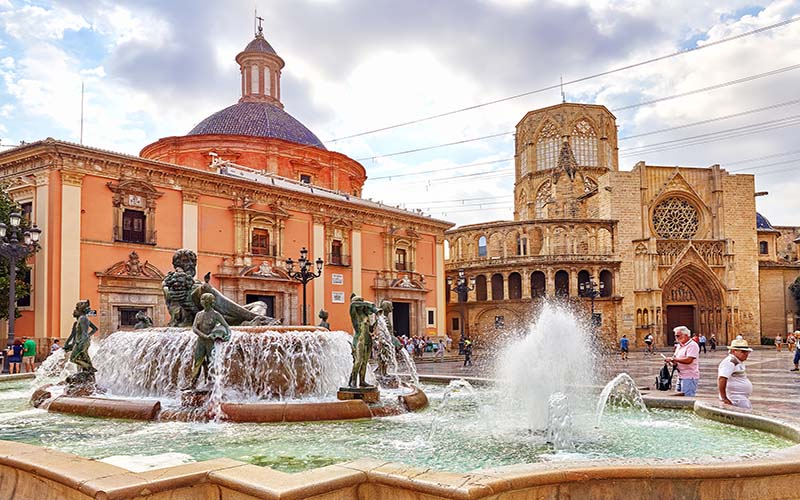 Best places to go in Valencia

Our trip begins visiting the archaeological remains of the old Via Augusta in Salvador Street and surrounding areas from the Roman past.

The Arab wall of Torre de la Posada del Ángel (12th century) and Almohad Galería del Tossal still stands. In the Plaza de San Luis Beltrán is the curious construction known as the Almudín (rebuilt in the 14th-16th centuries). It is a beautiful porticoed building dedicated to storing wheat.

The towers of Quart (15th century), with an imposing rounded silhouette, have the flaws of the French siege of 1812. In the Plaza de los Fueros are the Torres de Serranos (14th century), which were a prison for the aristocracy. In the primitive port are the Atarazanas (14th century), where boats were built and serviced. A summary of Valencia’s past can be understood in the underground Archaeological Centre of L’Almoina. 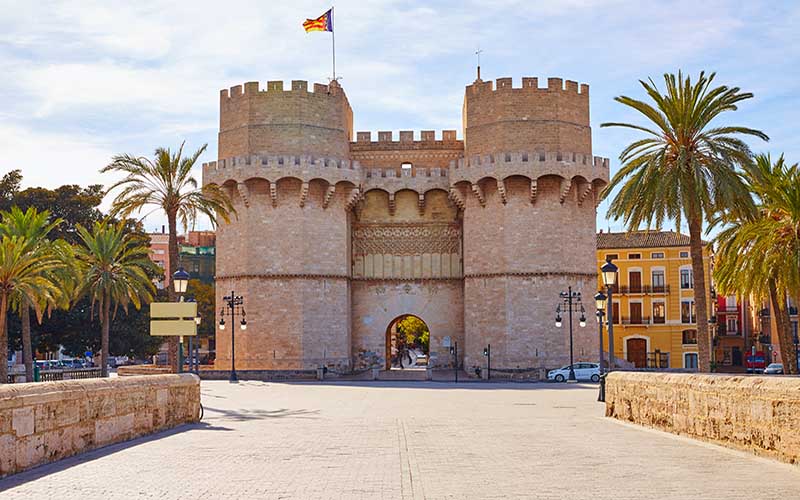 The Cathedral and surroundings

The Cathedral (13th-18th centuries) has a late Romanesque facade. In addition, it has a great number of Gothic constructions and early Renaissance spaces such as the Chapel of the Resurrection. Inside the cathedral the main altarpiece (16th century) by Hernando Yáñez de la Almedina stands out. 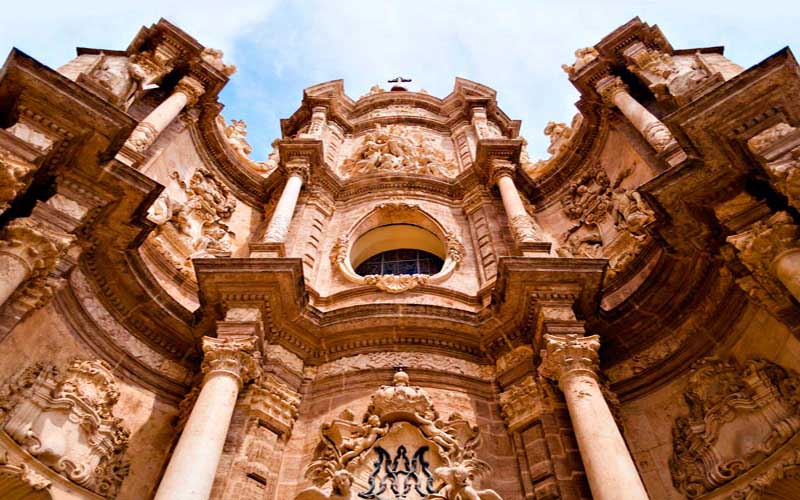 Main facade of the Cathedral.

The famous bell tower of El Micalet (14th-15th centuries) is over 50 metres high. Inside it keeps a bell of the 14th century, next to another ten of diverse periods. In the Museum of the Cathedral there are outstanding sculptures and paintings. These largely belong to the period of cultural splendour that Valencia experienced at the end of the Middle Ages.

In the so-called Plaza de la Virgen, the Royal Basilica of Nuestra Señora de los Desamparados (17th century) was built. The name of the temple remembers the first brotherhood that was in charge of giving Christian burial to the executed and poor. The Plaza del Mercado houses the beautiful sculptural front of the Real Iglesia de los Santos Juanes, a Gothic church with baroque interior decoration.

La Lonja de Valencia (1483) stands out for its singular central tower. Meanwhile, the nearby Consulate of the Sea (1498) reflects the mercantile strength of the time.

On the other hand, the Church of Santa Catalina is Gothic with Renaissance and Baroque features. It has an important bell tower. Next is the Plaza del Carmen where is a church now dedicated to the parish of the Santísima Cruz. Also important is the Church of San Juan del Hospital (13th century), that has a sober appearance.

In the Avenida de la Constitución is the magnificent Monastery of San Miguel de los Reyes (16th century). This impressive building houses the Valencian Library. At the same time, its church dates from the 16th and 17th centuries and the building has two cloisters.

The Town Hall (18th century) has a spectacular modernist facade which dates from the 20th century. What’s more, the Palace of Benicarló (15th century) was the seat of the Government of the Second Republic. Another interesting to visit in Valencia is the home of the Cervelló family (19th century). 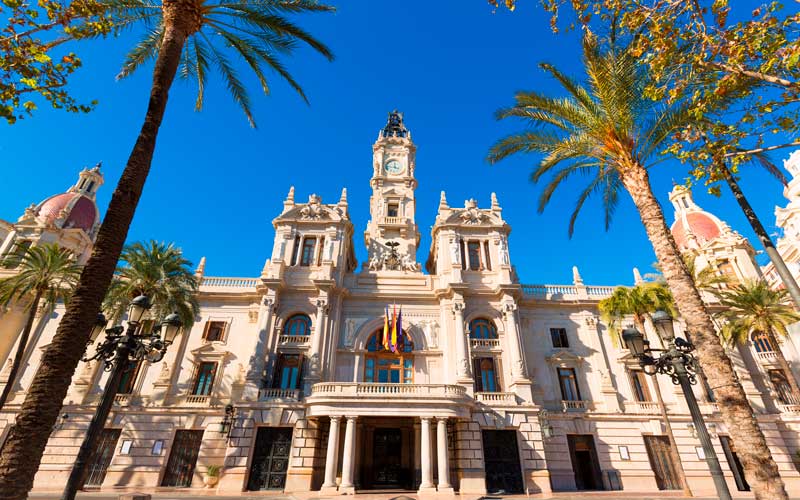 The house of the Counts of Almenara (17th century) or the current headquarters of the Gothic Palaces of the Generalitat (15-16th century) are also worth visiting. Do not forget the Palace of Justice (18th-19th century), with its beautiful Classicist appearance.

An Old Hospital (16th century) is the headquarters of the Provincial Library, while the very important Archive of the Kingdom of Valencia is housed in a the modern building of the last century. Inside the classicist building of the University of Valencia (18th-20th century) stands the cloister built in successive phases, as well as the chapel and the auditorium.

For its part, the enormous Central Market (1914, an interesting space to see in Valencia) incorporated iron and glass in its spectacular roofs. Part of the modern city’s landscape is made up of the Estación del Norte (1917), with a very ornate vestibule, or the Teatro Principal (19th century), with colourful ornamentations inside. 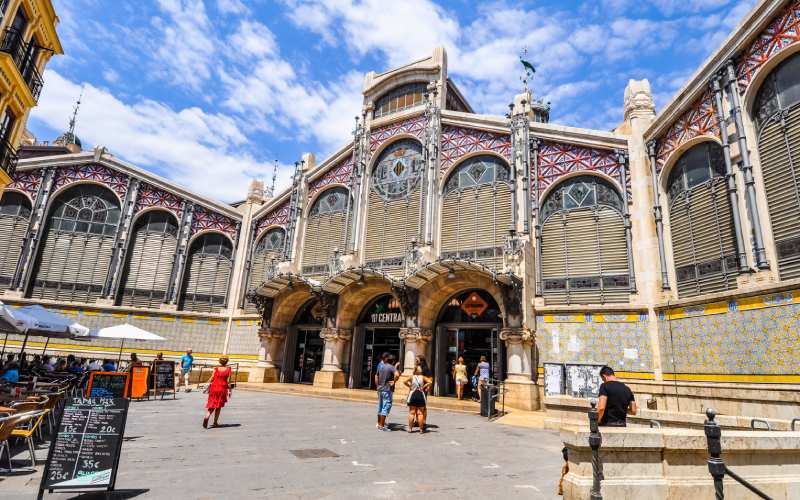 Moving on, there is a wide offer of museums in Valencia. The ‘house museums’ dedicated to the sculptor Mariano Benlliure and family or that of the local writer Vicente Blasco Ibáñez, as well as the birthplace of San Vicente Ferrer, are very noteworthy. The  San Pío V Fine Arts Museum includes collections of antique paintings and many works by Joaquín Sorolla.

On the other hand, the Valencian Institute of Modern Art (IVAM) is dedicated to the art of the late 19th and 20th century. To these two outstanding centres must be added the González Martí National Museum of Ceramics and Sumptuary Arts. Finally, the latest artistic trends can be found in the most recent Valencian Museum of Illustration and Modernity in Valencia.

Near the Turia riverbed is the City of Arts and Sciences (1998) designed by Santiago Calatrava. It holds  scientific centres such as the Príncipe Felipe Science Museum, the Hemisfèri and the Oceanogràfic. Finally, Valencia’s bullfighting tradition has its main stage in the Bullringw, which has a huge capacity and was built in the mid-19th century. 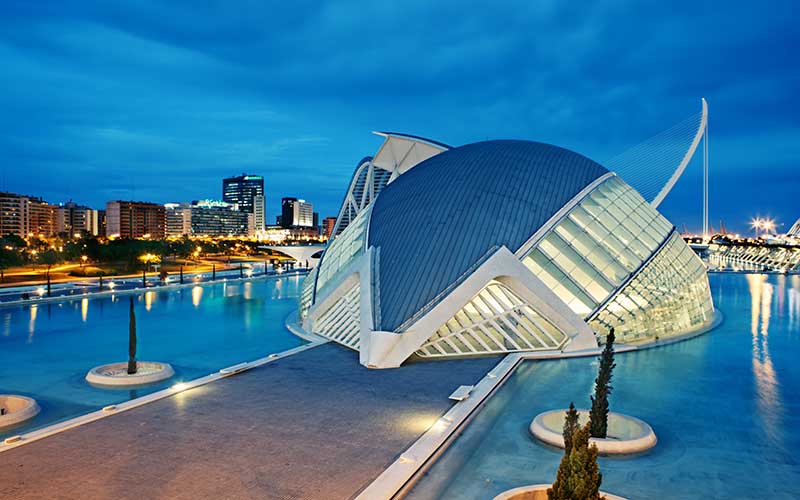 City of Arts and Sciences.

Events to look out for in Valencia: Valencia Open 500 (Tennis tournament, October).

Valencia, Valencian Community
It may interest you...