Near the famous Roman bridge of Alcántara is the town that gave it its name. In addition, it was the headquarters of the powerful Order of Alcántara, key in the development of Extremadura. Declared a Site of Cultural Interest, its heritage denotes the important role it played in the wars with Portugal.

Plan your stay in Alcántara

When you get to a place as remote and beautiful as this one, you have to take the time to visit it peacefully. That is why the things to see in Alcántara take up a whole day. Of all its attractions, the Alcántara Bridge is the most valuable and spectacular. The next day you can go to the Tajo Internacional Natural Park. On the return journey it is appropriate to stop at the small Brozas. In addition, those who have more time can take advantage of it to know the wonderful Cáceres.

Alcántara since the Neolithic

Knowing the local history is necessary before moving on to what to see in Alcántara. Thus, the remains of human settlements date back to the early Neolithic. There are many megalithic and dolmen complexes, as well as Iron Age settlements. As this was the narrowest pass over the Tagus River for many kilometres, it must have had wooden bridges in early times.

However, in the year 105, under the rule of the Emperor Trajan, the famous Bridge of Alcántara would be built. With it the Via de la Plata was reinforced, a route that linked Astorga with Mérida. The movement of travellers and merchants favoured the development of a town and its accesses were fortified. Thanks to that, some tolls called pontazgos were collected and the passage of robbers was prevented.

In the 8th century, during the time of Abd ar-Rahman I, the Muslims built a fortification that was called Al Kantara-Ass-Saif/La Espada Bridge. It was built on an elevation on the left bank of the river and is what it is today.

With the advance of the Christian armies, Alcántara became a protagonist in the border struggle. It changed hands several times during the 12th and 13th centuries. In 1213, the troops of King Alfonso IX conquered the place giving up its defence to the Order of San Julián del Pereiro five years later. This institution moved all its troops and its main convent to Alcántara. In this way it changed its name and became known as the Order of Alcántara. From then on, its history was marked by power struggles within the order. The conflicts with Portugal and the dynastic wars between Peter I the Cruel and Henry of Trastámara also stood out. From this place, territories of more than 7000 square kilometres were administered.

During the reign of the Catholic Monarchs, Alcántara was the scene of the meeting between Queen Isabella of Castile and her aunt Beatriz of Portugal. There they agreed on the conditions of the Treaty of Alcaçovas (1479), which put an end to the disputes between the two kingdoms. Isabella of Castile renounced her dynastic rights to the Portuguese throne. At the same time, the Infanta Beatriz of Portugal did the same with her rights over Castile. At that time the Master of the Order of Alcántara renounced his title in favour of King Ferdinand the Catholic. The integration of the patrimony and the jurisdiction of the order in the Crown deprived the town of the residence of a great potentate. This caused its depopulation and progressive decline. 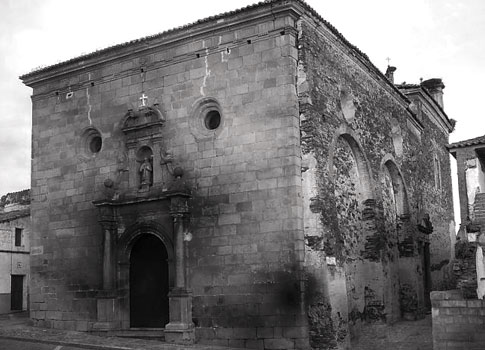 The expenses originated by the successive warlike contests propitiated the alienation of numerous assignments of the Order of Alcántara. The possessions would pass to the hands of the high nobility. This tendency was accompanied by a notable boom in the construction of important civil and religious buildings. The great families of the area were responsible for this process.

Between 1599 and 1601, a deadly and long-lasting plague epidemic broke out. In addition, as a result of the devastation caused by the Portuguese War of Restoration, in 1653 the inhabitants of Alcántara bought a vote in Cortes to defend their interests. In 1703, Philip V settled there temporarily, signing the declaration of war on the neighbouring country. In 1809, Napoleon’s troops sacked and set fire to the impoverished Alcántara.

Throughout the following decades of the 19th century, the disentailments caused a further loss of population. This led to the departure of the monks and their dependents, and a large part of the town’s monumental heritage was abandoned. The vast majority of the ecclesiastical lands sold became the property of new landowners.

Since the end of the 19th century and during the 20th century, emigration and the demographic decline have marked the evolution of life in Alcántara. The trend was aggravated by the Spanish Civil War (1936-1939). However, the construction of the nearby dam in 1960 gave a boost to the local economy.

What to see in Alcántara

Located to the northwest of the town, the Puente de Alcántara rises where the Tagus riverbed narrows. The infrastructure has suffered numerous ups and downs since its construction around 105. It was partially destroyed around 1213 to make the Christian attack more difficult and in 1543 the Emperor Charles restored it. Later, in 1707 the entrance arch disappeared due to the fighting with the Portuguese. It was restored in 1778, during the reign of Charles III. Finally, during the War of Independence it was seriously damaged, only to be rebuilt again in 1860.

The Puente de Alcántara is 194 meters long, 8 meters wide, and almost 60 meters high at its central point. In spite of the ups and downs it has kept its original structure. The weight of the bridge is distributed among six arches supported by solid pillars. The central span, with 28,8 m. of span, is the largest opening among Roman bridges currently standing. Built with padded granite ashlars, it has a central axis not very symmetrical, where there is an honorary arch finished by battlements and decorated with the Imperial coat of arms of Charles V. At the head of the bridge there is a small temple dedicated to Trajan.

After enjoying the most famous landmark to be seen in Alcántara, it is time to continue the tour. This leads to the walled enclosure, of which only a few canvases have been preserved. In the southern area is the Arco de la Concepción, from the 17th century. On the other hand, in the town centre we can emphasize the Conventual de San Benito, an old prioral house of the Order of Alcántara. Between 1506 and 1575 a church, a convent and an old inn were built in Renaissance style. It was abandoned in 1835 with the disentailment of Mendizábal, being declared National Monument in 1914. It is currently the headquarters of the San Benito de Alcántara Foundation.

Architecturally, the cloister, in Gothic style and with a square floor plan, stands out. Also the exterior facade of the Old Hostelry, known as the Carlos V Gallery, structured in three bodies with arched galleries. Such structures are flanked by two massive cylindrical towers with imperial coats of arms. The place serves as a stage for the performances of the Alcántara Classical Theatre Festival. On the other hand, the Church of San Benito was finished after the rest of the complex. The plateresque decoration of its three naves is remarkable.

Some of San Benito’s works of art were moved to the Parish Church of Santa Maria de Almocovar, located in the Plaza de España. Its three access doors and part of the tower are in late Romanesque style. However, they were retouched in the 16th and 17th centuries. The alabaster tomb of the Commander Antonio Bravo of Jerez shines inside. Equally notable are the five panels by the Extremaduran Renaissance painter Luis de Morales.

In the nearby Plaza de San Pedro is the Church of San Pedro de Alcántara (17th century), a baroque temple built over the birthplace of the saint. Thus, the room where he was theoretically born is preserved inside, with a piece of his mantle as a relic. Continuing the route through what we can see in Alcántara, in the middle of the ruins of the castle we can find the remains of the Convent of the Espíritu Santo.

The city was a stately town and many of its buildings were the noble mansions erected during the 16th century. Its façades, built with granite ashlars, open linteled holes, display coats of arms and corner windows. Meanwhile, the rooms are organized around a porticoed courtyard.

From the Corredera square it is possible to access an interesting element to see in Alcántara, the Jewish Quarter. In its splendorous 15th century, the aljama had a rabbi, a synagogue, a hospital and a cemetery. Its narrow streets of modest whitewashed houses on two floors maintain the atmosphere of those distant times. The most interesting building is the 14th century Synagogue.

The attractive chimneys that crown the roofs are a sign of Alcántara’s identity. This small decorative display is being spoiled by a considerable amount of noisy storks that nest there. In the surroundings of the town it is also interesting to look at the so-called bohíos or bujíos, circular shepherd’s huts that stand in the countryside. This concludes the tour of the best things to see in Alcántara.

These are the most outstanding festivals to be seen in Alcantara. Virgen de los Hitos (first weekend in March if it does not coincide with Easter) and San Pedro de Alcántara (19th October).

Here are some other notable events to see in Alcántara. Alcántara Classical Theatre Festival (first week of August) and Medieval Market.