Lonja de la Seda (Silk Exchange) is one of the most characteristic buildings of the city of Valencia, located in the heart of the old town. Built in the 15th century, it was in 1482 when the architect Pere Compte started to build it. The UNESCO declared the site a World Heritage Site in December 1995. It has also been a National Historic and Artistic Monument since June 1931. These recognitions have led to its consolidation as one of the most famous monuments of European civil Gothic. 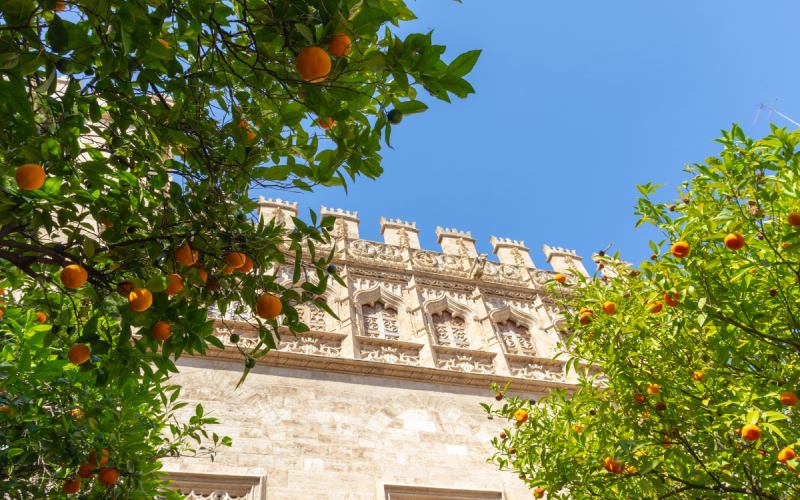 The merchant’s exchange, not all Gothic is cathedral

The Lonja de la Seda/Mercado de la Seda (Silk Market) is also known as the Lonja de los Mercaderes or Casa de Contratación. It is one of the most emblematic Gothic buildings in Spain. In the Valencian Community, the Mediterranean Gothic stands out, very different from the Castilian Gothic typical of other places such as Burgos. 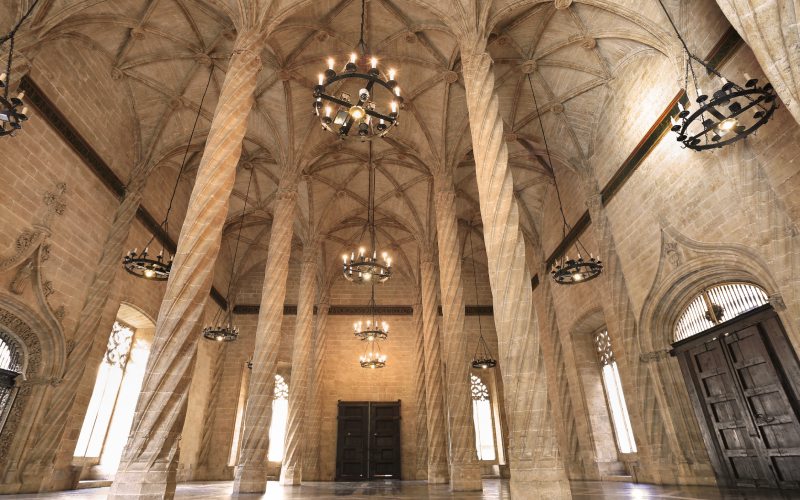 The famous monument was built between 1482, when the first stone of the Lonja was laid, and 1548. Its architect, Pere Compte, directed its construction from 1483 to 1497. A Valencian citizen and also an engineer, he was inspired by the market of Palma de Mallorca. Unfortunately, he died without seeing the work finished and it would be other masters who would carry out the building. This is considered Pere’s masterpiece. It should be noted that the commission to raise it came to cover the needs of the Valencian silk business; which was booming at the time.

The whole complex is dedicated to trade. From the beginning of its construction it was conceived as a temple for the exchange of products, for a new period that brought prosperity and development to the city of Valencia. The building is the confirmation of the wealth of the Valencian Golden Age (15th century) and shows the commercial revolution that took place in the High Middle Ages, a time when social development and the prestige acquired by the local bourgeoisie were strengthened. A good example of this is its location, in the centre of the city in front of the Santos Juanes temple and the Central Market, and the space it occupies, an area of some 1,990 square metres. 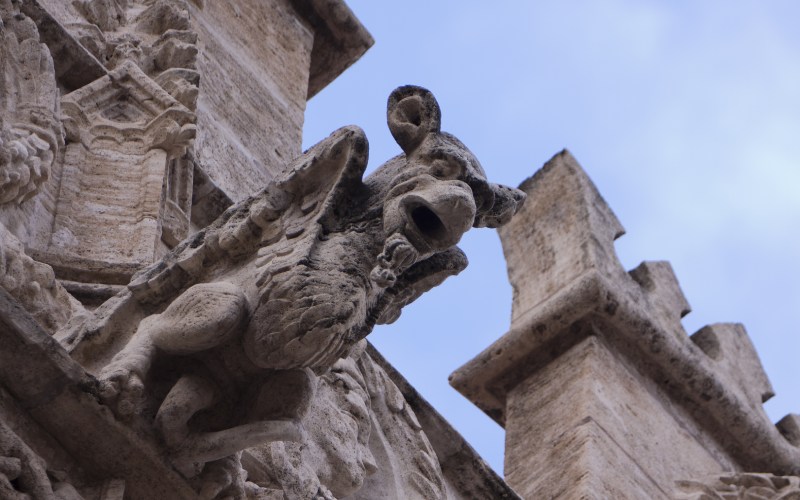 The construction is made up of three bodies. First there is the trading hall, followed by the central fortified tower, where an impressive 110-step stone spiral staircase stands out. Finally, on the left, looking out from the Plaza del Mercado, is the Consulat del Mar, as well as a famous garden, known as the Patio de los Naranjos.

The Hall of Columns or Hall of Commerce occupied the first part of the construction. It is a large hall divided into three longitudinal naves by 24 spiral columns of 18 metres high each. The central tower has a ground floor and two upper floors; which were originally the prison for defaulting merchants who had been declared bankrupt. Under this prison there was a chapel dedicated to the Immaculate Conception. 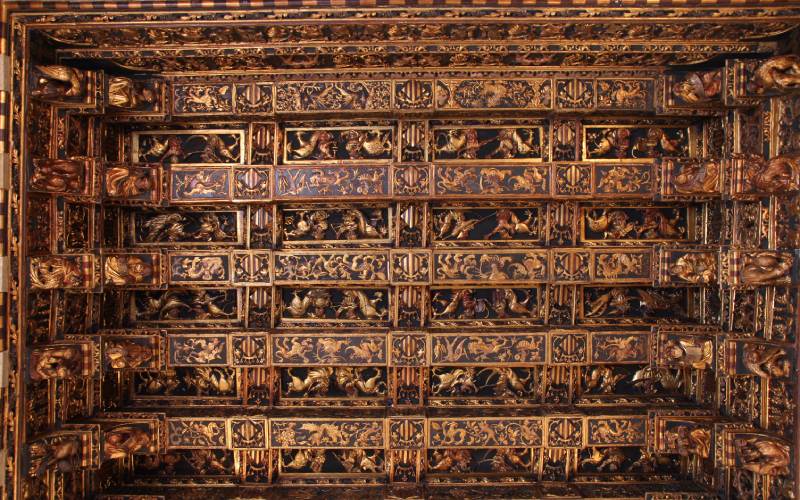 Roof of the Golden Chamber of the Consulat del Mar. | Shutterstock

On the other hand, the aforementioned Hall of Commerce is a representation of paradise. The 24 columns simulate palm trees and the ceiling is the sky. In antiquity, the ceiling vault was a strong blue colour, where the stars were represented. In the Consulate, the Golden Hall or the main hall with its beautiful ceiling of golden paintings from the 14th century, as well as the Patio de los Naranjos, among others, stand out. The main façade of this Gothic building has exceptional decoration; an impressive entrance and some of the best windows can be seen throughout the Plaza del Mercado. 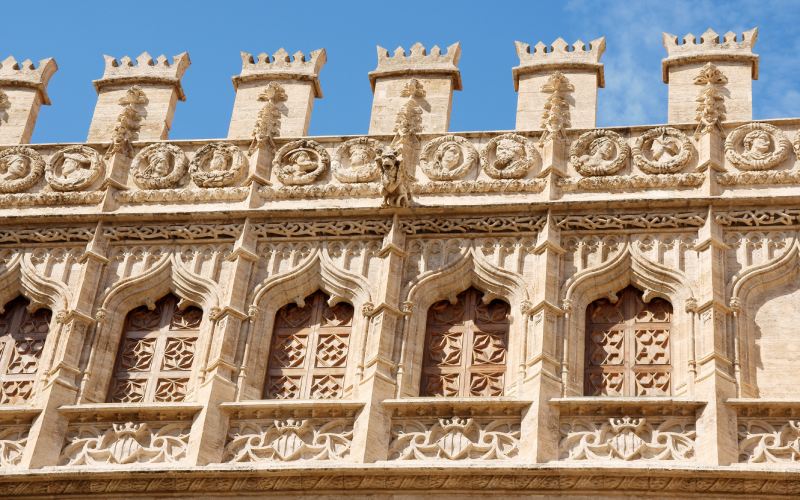 Detail of the facade. | Shutterstock 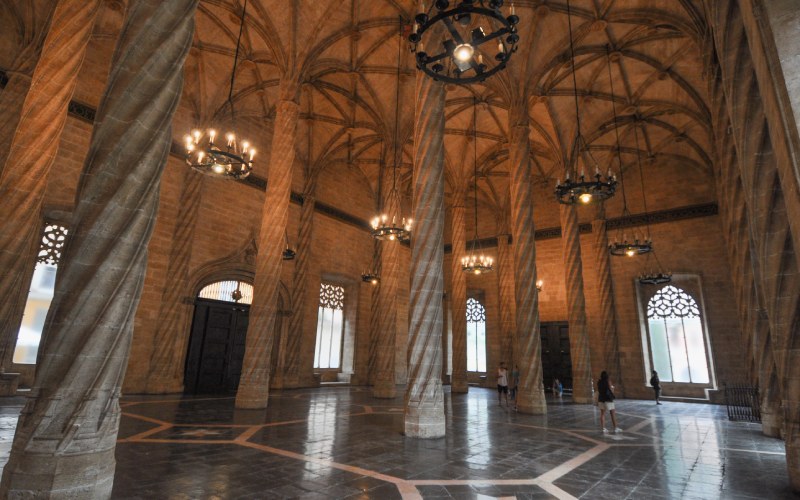 La Lonja de la Seda in Valencia, is still today one of the most emblematic and prestigious places in the city thanks to its historical and artistic importance. The monument houses many curiosities and legends of Valencia that are undoubtedly worth knowing. For example, it was the first Valencian building to be declared a World Heritage Site. For its construction, the authorities demolished 25 houses from the medieval period that were on the site of the current building. 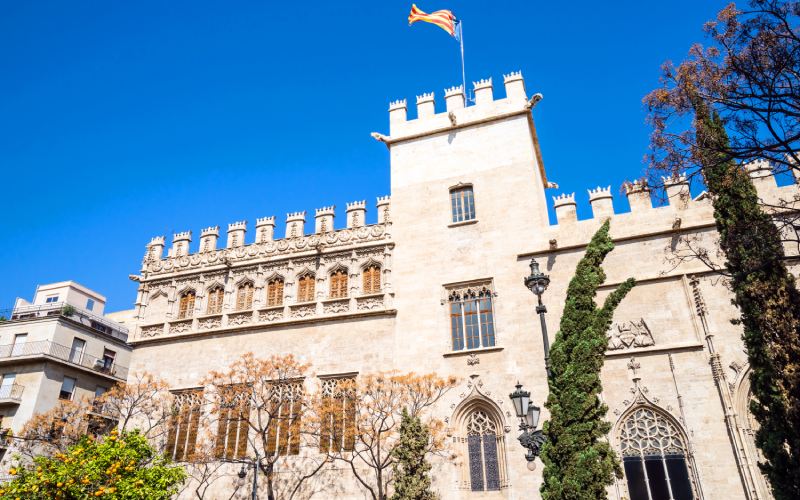 Its name, Lonja de la Seda, is due to the fact that at that time, the silk merchants were the most important guild in Valencia. In addition, the term “lonja” means portico; as a tribute to the same porticoes where the merchants went to talk about business. The Trading hall had the Taula de Canvis installed; which gained great prestige due to its great solvency and banking operations. Nowadays, this Taula or Table where commercial transactions were carried out, as well as the first known bill of exchange in Spain, can be visited in the Municipal Archive of Valencia. Furthermore, as it is the headquarters of the Cultural Academy of Valencia, it hosts cultural events and exhibitions. 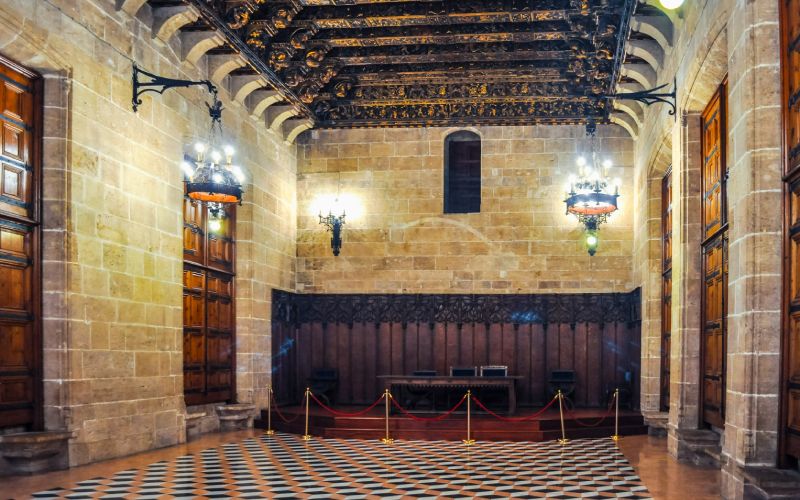 La Lonja de la Seda is a perfect milestone to get to know the real Valencia; being one of the most fascinating tourist attractions in the area. A genuine architectural gem of the 15th century in Gothic style, whose history and architecture make it an almost mandatory visit. The ticket to visit it costs between one and two euros, depending on whether it is individual or group entry. However, on Sundays, Saturdays and public holidays it is free.