Alcalá de Henares is an old Roman city, headquarters of one of the most prestigious universities in Europe, and the birthplace of Cervantes, the author of Don Quixote. Its beautiful Old Town and University were declared World Heritage Site and it’s a good place to try amazing and cheap food in an excellent atmosphere.

What to see in Alcalá de Henares

Things to do in Alcalá de Henares normally involve the old city or historical sites this Roman city offers. We recommend visiting the Episcopal Palace, Cervantes’ Museum, and in case you had more time, towns such as Loeches or sights such as the palace in Nuevo Baztán or the Sureste Natural Park.

We recommend starting your visit in the old city, in the Hippolytus House and the near Complutum Site, which has a basilica, a forum, a market and many other interesting things to see — it even offers a dramatized tour.

The area in the walled enclosure is one of the best places to park your car and enjoy this amazing town on foot. Now, it would be good to visit the Burgo of Santiuste Interpretation Center (which shows you how this city looked like in the middle ages).

Nearby, Puerta de Madrid is placed: it used to be the traditional access for the court which linked Madrid and Alcalá de Henares. Neoclassic in style, this gate appears in the movie Spartacus (1960) from director Stanley Kubrick.

Do not miss the Laredo Palace (now a Historical Interpretation Center), which was built in the 19th century; it preserves an original edition of the Complutensian Polyglot Bible. Plaza de Cervantes is the heart of the city, where there is a Tribute to Cervantes sculpted by Nicoli.

Behind the plaza we find Alcalá’s University – Colegio Mayor of San Ildefonso, built by Cardinal Cisneros. This university was the first one to admit students of lower economic status, following the Fransciscan tenets. It is a plateresque masterpiece that reflects the “imperial” spirit back at the time, as it is reflected in its decoration.

Another highlights in the university are Santo Tomás of Villanueva Courtyard (1618) and the Trilingual Courtyard (where the Polyglot Bible was presented). The University Paraninfo (Auditorium) is the most symbolic building, since it is here where the most important events, such as graduation ceremonies, are held. Those who managed to pass could go through the Glory Gate and those who failed through the Donkeys Gate (the gate for silly people). Back at the time, there were three type of students: the rich ones, those who were enjoying a grant (who wore a special piece of garment) and the spongers. This Paraninfo holds the Premio Cervantes every year. 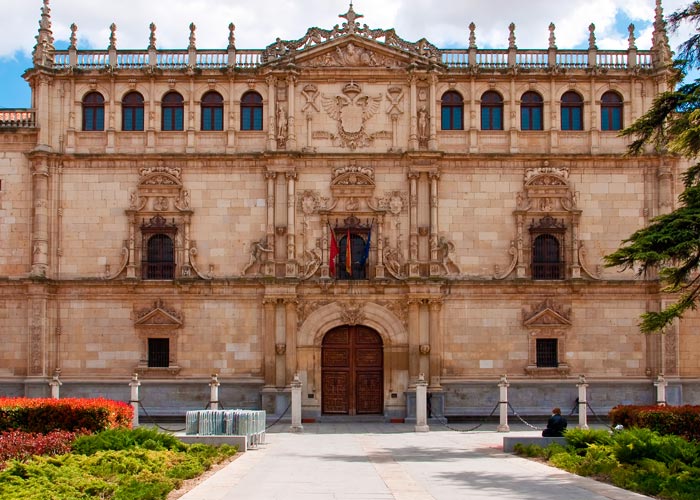 San Ildefonso Chapel stands out as a mixture of different decoration styles: Gothic, Mudejar and Renaissance-like motivs. Here we also find the Carrara Sepulcher made in marble (1521).

There are many other convents and colegios mayores in this area. But we want you to go to Plaza Mayor now, where we can visit the Corral de Comedias of Alcalá (1601), the theatrical courtyard, which is one of the oldest theaters in Europe. You can learn about how people used to sit in the theater in the Spanish Golden Age.

Now go to Calle Mayor, the most important point of the old Jewish Quarter in the Middle Ages. Antezana Hospital is located in number 46, set up in 1483 to assist poor people. According to tradition, Cervantes’ father used to work here.

Next to the hospital we can visit Miguel de Cervantes House Museum, where the famous writer was born -the house tries to imitate how this place used to look like in the 16th and 17th centuries.

Some other interesting places to visit are the Regional Archeological Museum, housed in the Dominicos Convent (17th century). This place has some pieces from the Roman era. Also, do not miss the Archbishop’s Palace, which used to be the residence of the archbishops of Toledo in Alcalá de Henares. It was in this palace where Catalina of Aragón, daughter of the Catholic Kings, was born, and where it happened the first interview between Columbus and the Catholic Kings.

There is also an interesting Magistral-Church of Santos Niños Justo y Pastor. It is in the chapel located here where the cardinal Cisneros was buried.

Do not miss the Sculpture Outdoors Museum or take the famous Cervantes Train which takes you from the train Station called Atocha to Alcalá de Henares; this means of transpor stands out because several actors and people wear dresses from the Spanish Golden Period. This program includes a guided tour through the more symbolic monuments in the city.

Cultural casinos, the genuine parliaments of the 19th century
In almost any Spanish city it is easy to recommend a visit to the casino Más información

Discovering Málaga in Three Days
[vc_row][vc_column][vc_column_text]Planning what to do in Málaga for three days can be a bit stressful, as Más información