Spain has many Royal Sites throughout its geography, including the impressive Royal Palaces. Beyond being the official residences of the royal family, they are authentic testimonies of history. Associated as their name indicates with the royal family, they are great architectural works of art. A perfect way to follow the thread that has narrated the last centuries of Spain. 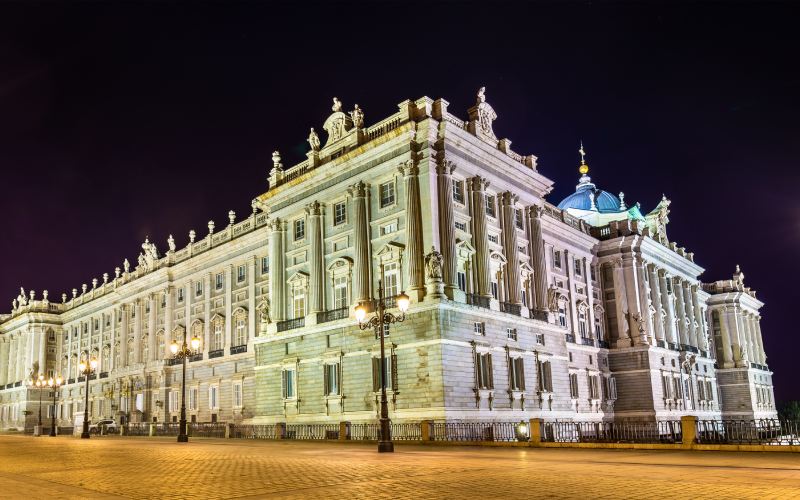 The Royal Palace of Madrid (Palacio Real de Madrid) is the official residence of the King of Spain; although the last monarchs have stayed at the Palacio de la Zarzuela. This palace has twice as many rooms as other royal palaces like the Buckingham Palace or Versailles Palace, specifically 3418. Not in vain, it is the largest in all of Western Europe and one of the largest in the world. Also known as the Palace of the East (Palacio de Oriente), it houses a valuable heritage among which the Stradivarius Palatinos instrument set is worth mentioning. 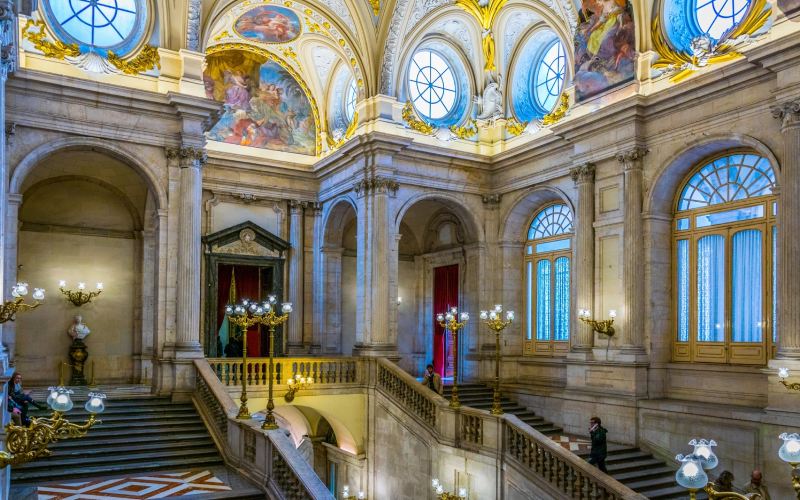 Stairs inside the Royal Palace of Madrid. | ShutterStock

This palace, built by Philip V, is located in the Plaza de Oriente in Madrid and at the opposite end of the square is the Royal Theatre (Teatro Real). It was built on the ashes of the old Royal Alcazar in 1738 and its first inhabitant was Charles III. Although Alfonso XIII had to leave it with the arrival of the 2nd Republic, Manuel Azaña would set up his residence there. It is one of the few official residences of Heads of State open to the public. 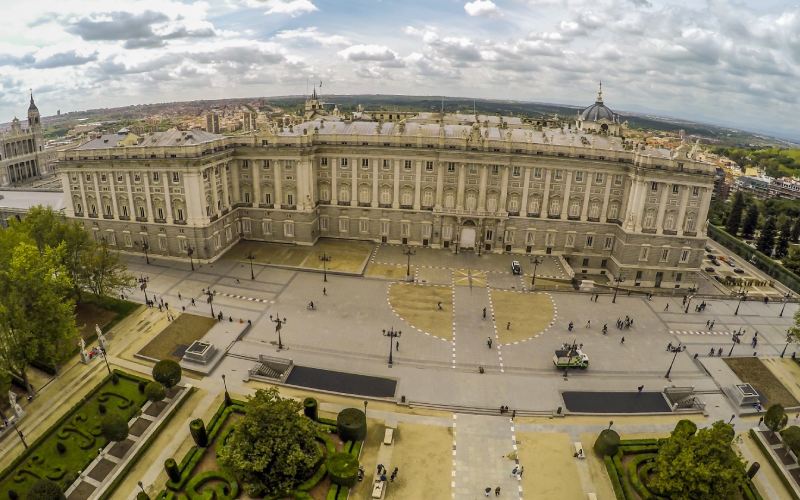 Aerial view of the Royal Palace of Madrid. | ShutterStock

Visitors can enjoy the private rooms of King Charles III and their decoration by Sabatini; which is repeated throughout the main floor. It is essential to visit the throne room and Gasparini’s chamber in the clear Rococo style. The Royal Armoury, one of the European collections along with that of Vienna thanks to the Habsburgs, is one of the best kept treasures of the complex. The gardens of the Campo del Moro were initially commissioned by Philip II, and were renovated and extended by later monarchs. In addition, the mysterious Bonaparte Tunnel starts from this spot. 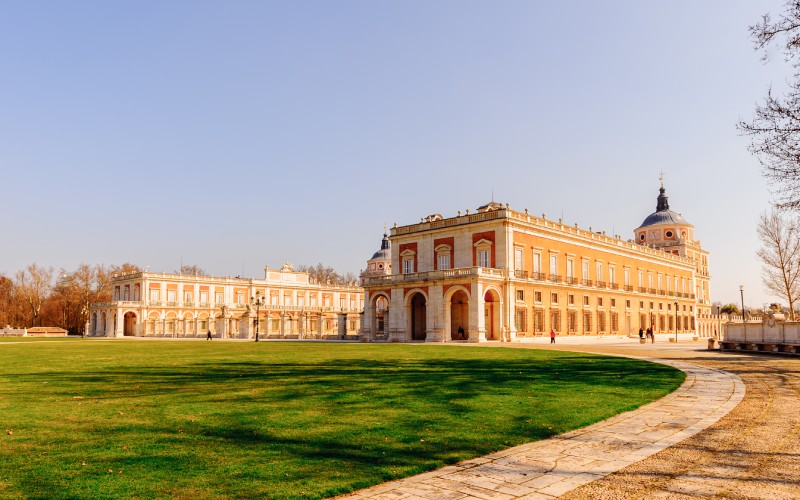 The Royal Palace of Aranjuez (Palacio Real de Aranjuez) is located in the town of Aranjuez, on the banks of the River Tagus in the Community of Madrid. It is considered the country residence of the Spanish royal family. It was declared a World Heritage Site by UNESCO and is surrounded by more than 100 hectares of gardens. Philip II turned the place into an Italian-inspired villa that would end up being reformed by the later monarchs and finally converted into a classical-style palace.

The Official Halls are of great beauty. Among them, it is worth mentioning the Queen’s Dressing Room (Tocador de la Reina), the Dance Hall (Salón de baile) or the Formal Dining Room (Comedor de gala). As for the exteriors, the King’s Garden (Jardín del Rey), inspired by the Italian Renaissance gardens, or the Prince’s Garden (Jardín del Príncipe) deserve special attention. Adjacent to the Prince’s Garden is the small palace of the Royal House of El Labrador, where Charles IV, as Prince of Asturias, used the place as his particular place of enjoyment. 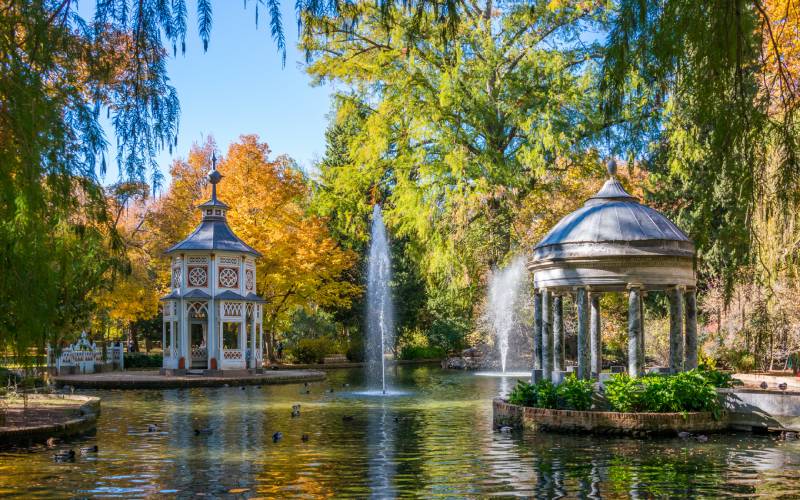 Gardens of the Royal Palace of Aranjuez. | ShutterStock

Near the pier, it is worth mentioning the existence of the Falúas Museum. It is a monographic exhibition of the Spanish royal collections. In it you can see the ships that the kings of Spain used to sail the Tagus, standing out among them, the barge of Charles IV. 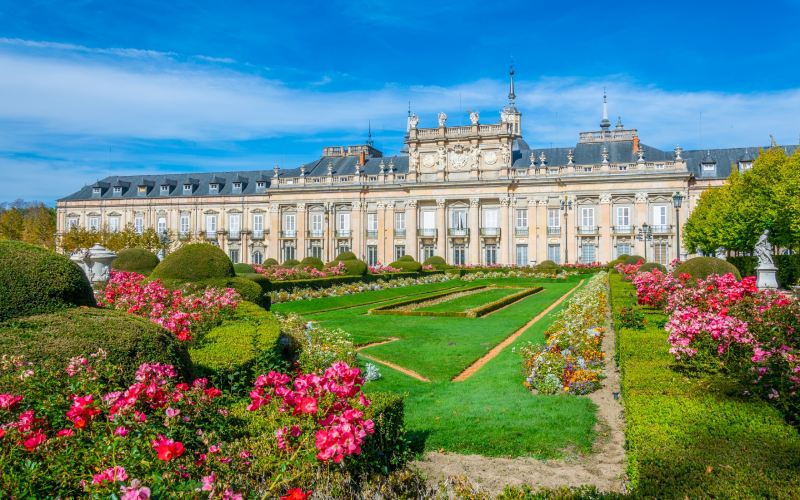 The Royal Palace of La Granja de San Ildefonso (Palacio Real de La Granja de San Ildefonso), declared a Historic Monumental Site, was built by Philip V in 1717 to recall his childhood in the French court of his grandfather, Louis XIV. This little palace located 13 kilometres from Segovia became a very special place. In fact, it was destined for a summer retreat. The monarch was captivated by the beauty of the place for hunting. 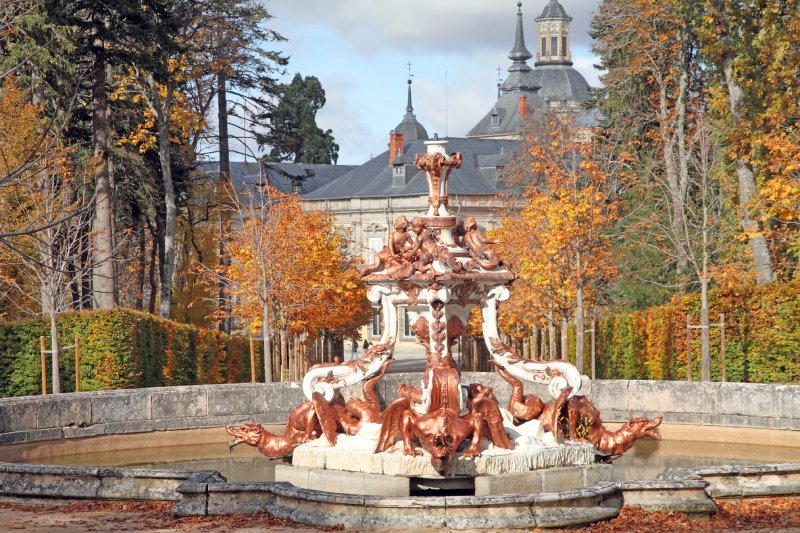 The palace, initially of very modest dimensions, was later remodelled incorporating characteristic elements of French architecture. It is now possible to visit the old royal flats. The rooms on the ground floor are named after the frescoes that decorate their vaults. You can visit the Hall of Hercules (Sala de Hércules), the Hall of Justice (Sala de la Justicia) or the spectacular Marble Hall (Sala de Mármoles). Other places to visit are the Tapestry Museum and the Royal Chapel or Collegiate Church. Finally there are the gardens with their impressive fountains. 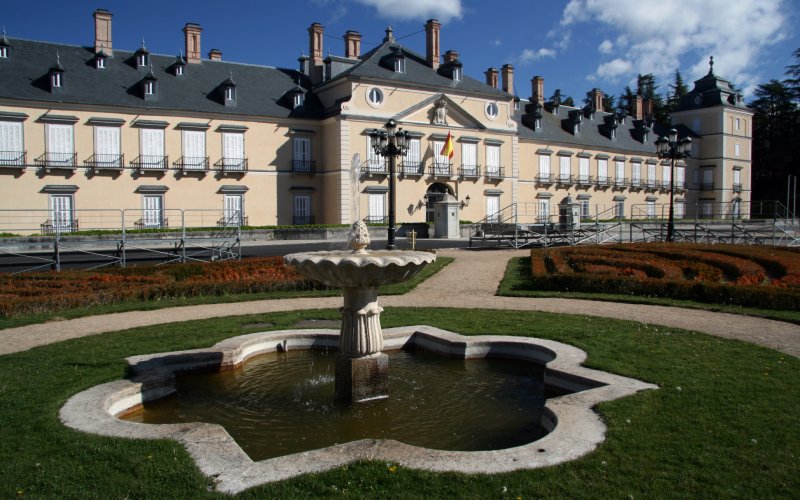 Originally a hunting lodge for the Habsburgs, the Royal Palace of El Pardo (Palacio Real de El Pardo) in the town of the same name in Madrid is famous for having been the residence of the dictator Francisco Franco. However, it is now used to house foreign heads of state. Its origins are linked to El Pardo Mountain and it was built by order of Charles V in the 16th century. It is located in the middle of a natural area of incalculable value, considered to be the most important Mediterranean forest in the Community of Madrid.

The palace was finished by Philip II, who decorated its interior with important frescoes. It also has a portrait gallery with works by great artists such as Titian and Antonio Moro. Unfortunately all this decoration was destroyed by a fire in 1604. Later Charles III extended the residence that would become a regular visit during the winter months. 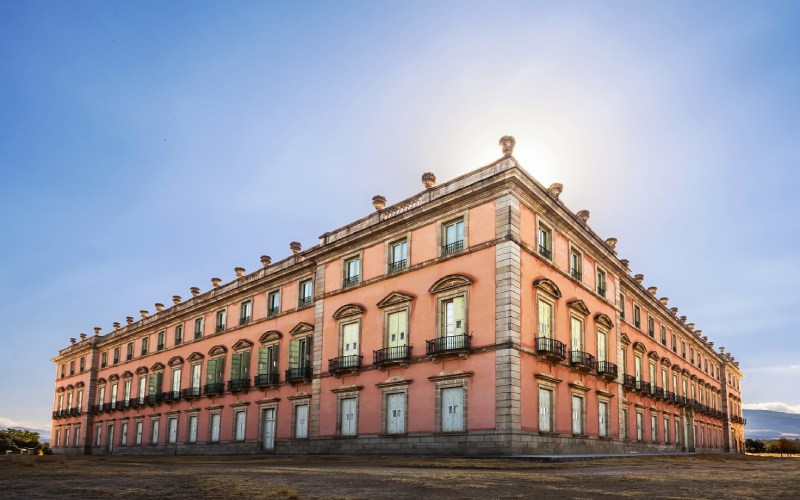 Managed by Patrimonio Nacional, the Royal Palace of Riofrío (Palacio Real de Riofrío) is located in Segovia; 11 kilometres from the town of San Ildefonso. Surrounded by more than 600 hectares of forest with a great biodiversity, the building stands out for its classical aspect reminiscent of Roman palaces. It is a place largely unknown to the general public. A hunting lodge during the 18th and 19th centuries, it was built by Elizabeth Farnese, the widow of Philip V. With it she wanted to offer the little Infante Don Luis a place to retire.

For more than a century it had no guests. It was only inhabited by King Francis of Assisi and by Alfonso XII when he became a widower. Finally, in the sixties, it was modified. The Alfonsino Museum and the Hunting Museum were created, the rooms of the palace were recovered and the works of art increased. It is worth noting the environment around the building, an evocative enclave that forms an important ecological and biological reserve. 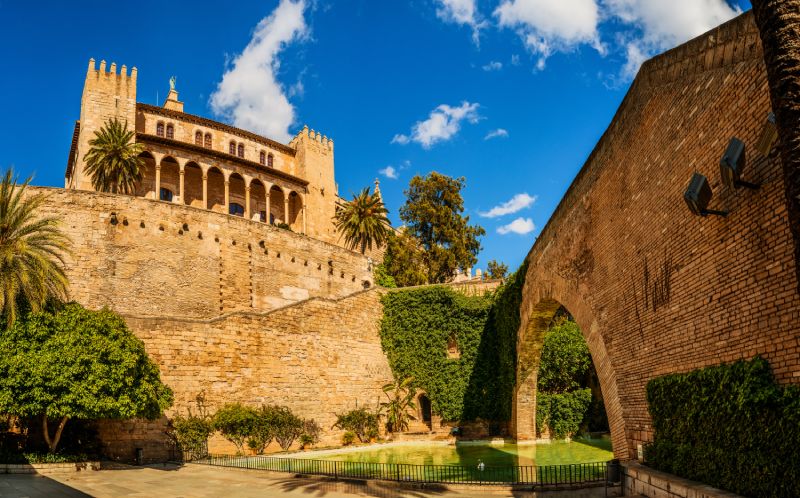 The Royal Palace of La Almudaina (Palacio Real de la Almudaina) is the Royal Alcazar of the city of Palma de Mallorca in the Balearic Islands. From the 14th century it is the official residence of the monarchs during their stays in Mallorca. This palace summarizes the different artistic styles that have been taking place on the island. Located in an old Roman settlement, it was built for Jaume II as the court of the Balearic monarchs since then. Places to highlight are the Courtyard of Honour or Courtyard of Arms (Patio de Honor o de Armas), where the official receptions of the Royal Family are usually held, the Arab Baths or the Gothic Hall (Salón Gótico), the most important of the whole palace.

Cuarto Alto of the Royal Alcázar of Seville 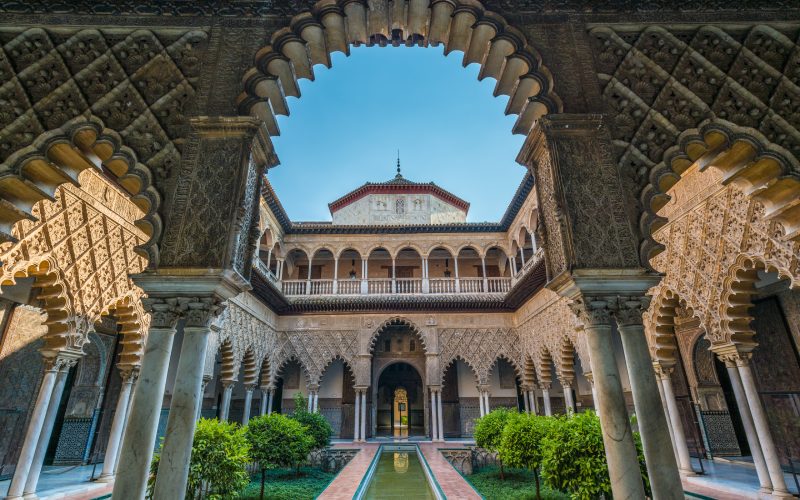 Cuarto Alto of the Royal Alcázar of Seville. | ShutterStock

In Seville, right on the banks of the Guadalquivir, is the Royal Alcázar of Seville (Reales Alcázares de Sevilla). Inside, there are several palaces, also called cuartos. The Cuarto Alto was inhabited by Philip V and Elizabeth II. Although these were not the only monarchs to enjoy it during their visits to Seville. The interest of your visit lies in the fact that you can enjoy a mixture of different architectural touches such as Nasrids, Toledans, Caliphs or Almohads. In spite of this, it has a great predominance of Mudejar and Renaissance styles.

fountains, Madrid, palaces, parks and gardens, provincial capital
It may interest you...