Montfalcó Murallat is one of the greatest exponents of a walled medieval town in Catalonia. It preserves in perfect condition the fortress that surrounds the town, all its houses being within the perimeter. It is located in the municipality of Les Oluges, in the region of La Segarra and the province of Lleida. The fact that although it has 15 houses, only two of them remain inhabited, is worth noting. Its small size, however, does not prevent it from being a powerful tourist resort. Due to this, Montfalcó Murallat is known as one of the most charming villages in Spain.

The legend of Montfalcó Murallat

The first mentions of this medieval village date from the 11th century. Previously, it was under Muslim rule. Over the last few centuries, Montfalcó Murallat was besieged on several occasions. The best known sieges occurred during the Catalan Civil War, in the 15th century, and the Reapers’ War, in the 17th century. 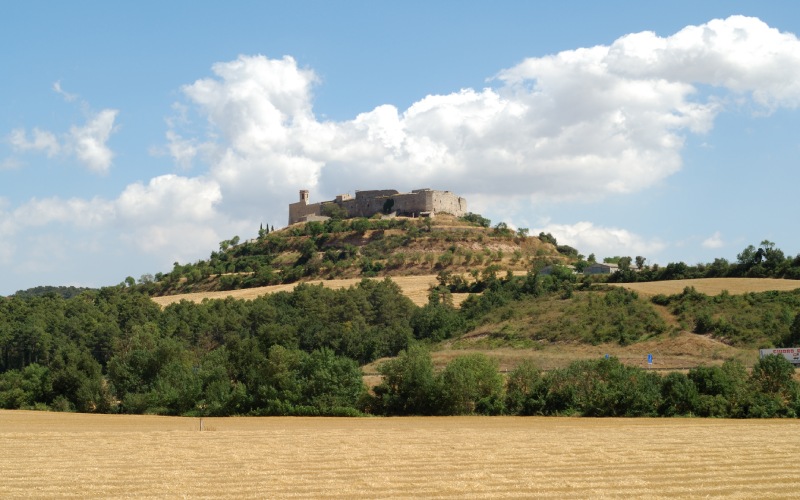 Montfalcó Murallat is completely surrounded by its wall. | Shutterstock

Legend has it that after a battle in the open during the Middle Ages, the inhabitants of Montfalcó took refuge inside its walls. Faced with the impossibility of besieging the village because of its impregnable walls, attackers began to throw messages tied to a piece of bread inside with a catapult. This was the way they came up with the idea of making the inhabitants of Montfalcó confront each other, otherwise they would die of hunger.

In response, the population would throw messages tied to fresh fish to tell them that they had enough supplies to feed themselves. It seems that the inhabitants of the village were going to get food from the neighbouring village of Les Oluges, through a long tunnel that connected both villages. This was how the enemy army gave up its attempts at siege. However, there is no evidence that this passage ever existed, so this anecdote should be taken as a legend and not as a historical fact. 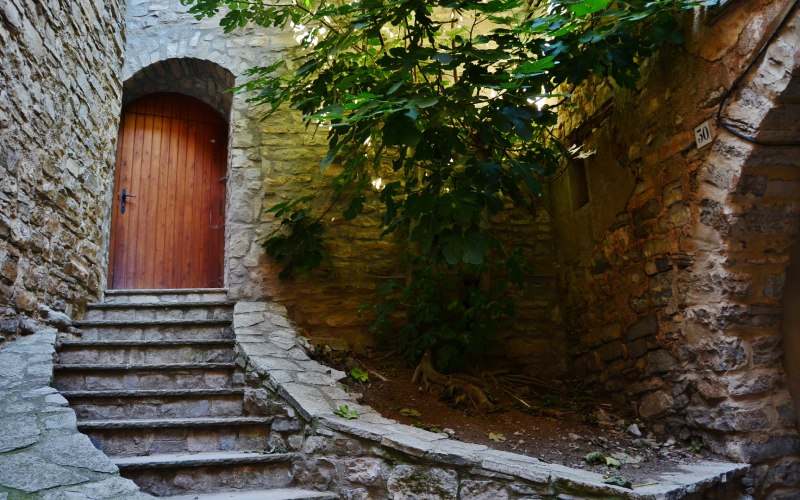 One of the most characteristic aspects of this medieval town is undoubtedly its wall. It is built with rectangular ashlars joined with mortar. As with other villages of the time in Spain, the fortress surrounds the entire village without a single building outside its walls.

Furthermore, it has the particularity that it only has two accesses to the interior of the village through the two vaulted doors on its southern façade. This was a defensive system used by the Muslims. Although it was originally built in the 10th century, over the next three centuries it was subject to alterations. During this long period its walls ended up surrounding the village, acquiring a shape similar to that of an isosceles triangle.

It looks like an abandoned village, as most of the houses are unoccupied. Only two are continuously inhabited. Also, some other houses are intended for holiday rentals. These are perfect to enjoy the rural tourism of Catalonia based in the best preserved medieval village of the whole region. 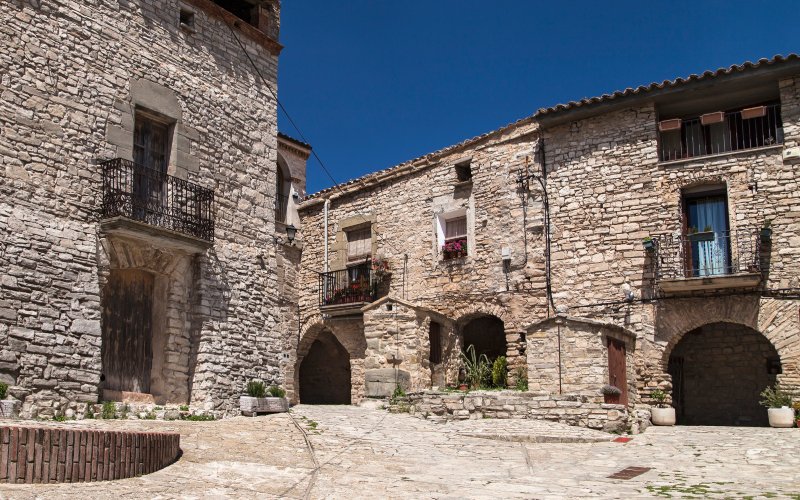 In terms of their structure, most of the houses in Montfalcó Murallat have the same layout. The lower part was dedicated to stables or agricultural work, the first floor was the family home and the attic was used as a pantry and storage room. In addition, some of them had an underground cellar. Taking a walk through its streets is like walking through a labyrinth surrounded by stone houses, porticoed galleries and arches. There are also examples of more modern buildings, built during the 17th and 18th centuries, but which also help to understand what this town was like in past times. In addition, access to vehicles is not allowed, so it is a totally pedestrian village. 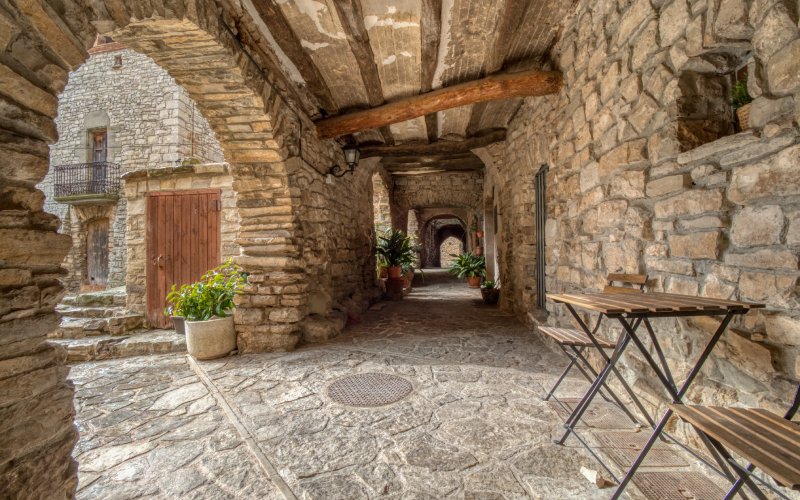 Another of the most outstanding buildings of Montfalcó Murallat is its castle; built throughout the 11th century on top of the hill. It was founded when the Count of Berga repopulated the area near the River Sion. Later, between the 11th and 12th centuries, the castle was given to other inferior nobles in exchange for loyalty and military service. In this way, it became part of the counties of Berga, Cerdaña and Cardona, among others. Nowadays, it is privately owned and forms part of the Spanish Historical Heritage.

Square and Church of Sant Pere in Montfalcó Murallat

This medieval village is full of narrow, labyrinthine streets, except for its square, which is a larger place. This is the first thing you see when you enter the town walls; and it is believed that it could be the old castle courtyard. Here you can see a cistern still used to provide water from the rain. Then, attached to one of the walls,is the church of Sant Pere de Montfalcó. It was built in the 11th century in a Romanesque style; although the many reforms that it underwent subsequently installed a 17th century Baroque altarpiece in its rooms. 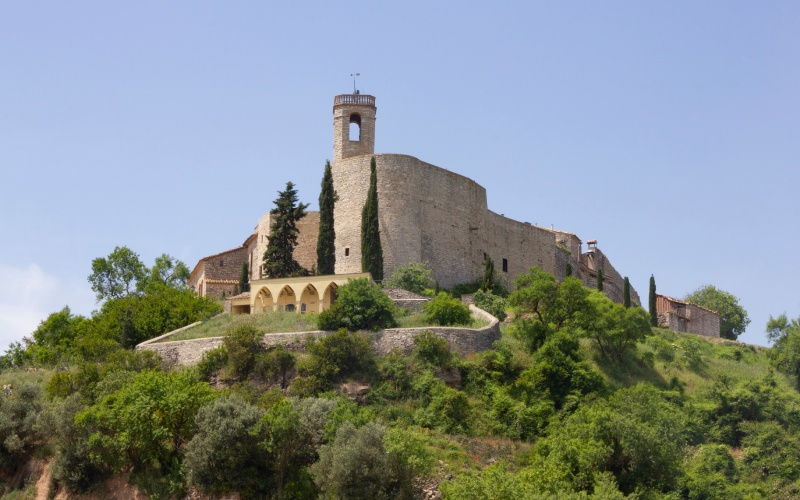 It has undergone so many reforms that only the entrance door and the apse of the original church remain today. This last element was built using the construction of a circular tower at the eastern end of the fortification.