The town where its inhabitants live under a rock

Considered as one of the most singular villages in Spain, its white houses were built without carving the rocks, unlike the trend in the area. They are popularly known as “abrigos bajo rocas” (shelters under the rocks).

It can be difficult to visit the village as it is in a hollow of rocks that flank a river. However, it is worth climbing the slopes and walk around its urban grid. Visiting the village takes about 3 or 4 hours. Moreover, here you have our recommendations on accomodation and the best restaurants to try the local products.

Once there, we also recommend the nearby Ronda (Málaga) or the provincial capital, Cádiz. 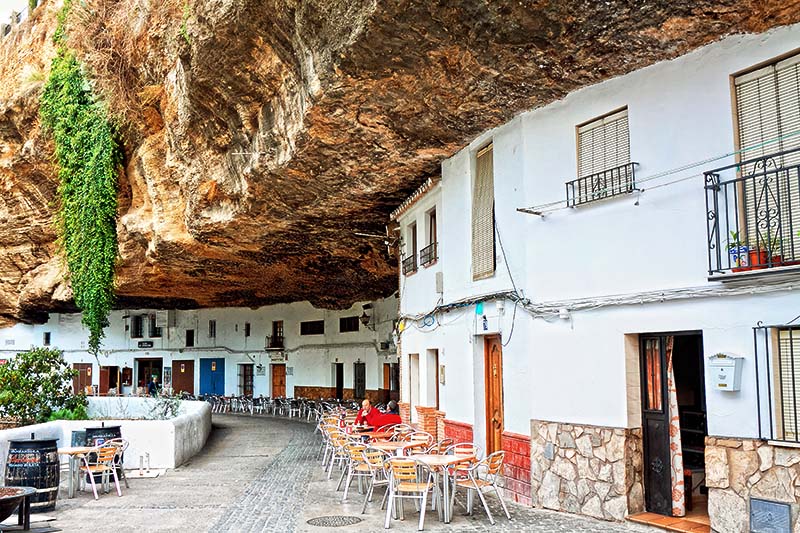 It is believed that the shelters under the rocks already hosted some civilisations in the Prehistory. Later on, on the vincinity of this village was located the Roman colony of Laccipo. Nevertheless, the design of the current city comes from the Medieval period.

Almohads built between 12th or 13th century a tower that is still preserved in the Alcabaza. The location of Setenil de las Bodegas was very strategic for the Kingdom of Granada. Its siege was described in the Crónica de Juan II (account of Juan II). An army led by Infant Fernando de Antequera attacked the town with lombards. These innovative artillery pieces threw thick stone projectiles against the walls. However, they did not achieve victory. 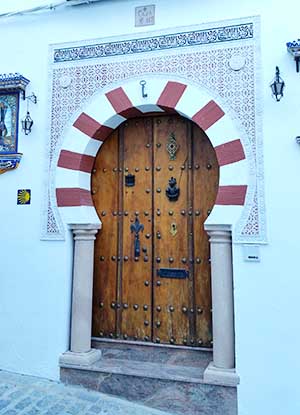 Remains of the Muslim rule.

Three years later, a chevauchée led by knight Hernando de Saavedra took place. He was the governor of the fortress of Cañete la Real. Finally, he died and the castle was taken by the people from Setenil. Around 1438, a group of Christians captivated in the castle rioted. As they did not get enough support, Muslims kept the fortress.

From the 16th century

The duke of Medina Sidonia took the vincinity area in 1455. He cut down forests and destroyed crops. Later on, Marquis of Cádiz did the same. One year late, Muslims knights from Setenil de las Bodegas were defeated in Lopera. However, the final climax came when the Marquis of Cádiz and Ferdinard the Catholic planned a siege using great artillery. At the end, the 21th September the resistence gave in. 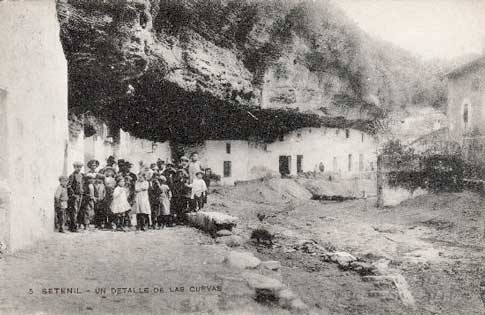 People from Setenil in an old postcard.

Because of the seven attemps to conquest the town they decided to called it Septem Nihil, which derived into the current ‘Setenil’. It was essential to the operations against Granada and it was declared Villa de Realengo (property of the Crown) thus. In 1501, the place was granted the Carta de Privilegios, that equalled its rights with those of the inhabitants of Seville.

Setenil de las Bodegas managed to become independent of Ronda in 1630. Centuries later, during the Peninsular War, residents organised guerrilla warfares against the French. At the present time, the town has become a very popular destination due to its unique diposition.

The tour should begin in the highest part of the town that is known as La Villa. We recommend the viewpoints of Lizón, Los Cortinales and Los Reyes Católicos. From there you can notice that just the Almohad tower (12th-13th century) of the old castle remains. It is square and has three floors, the first one with a barrel vault. 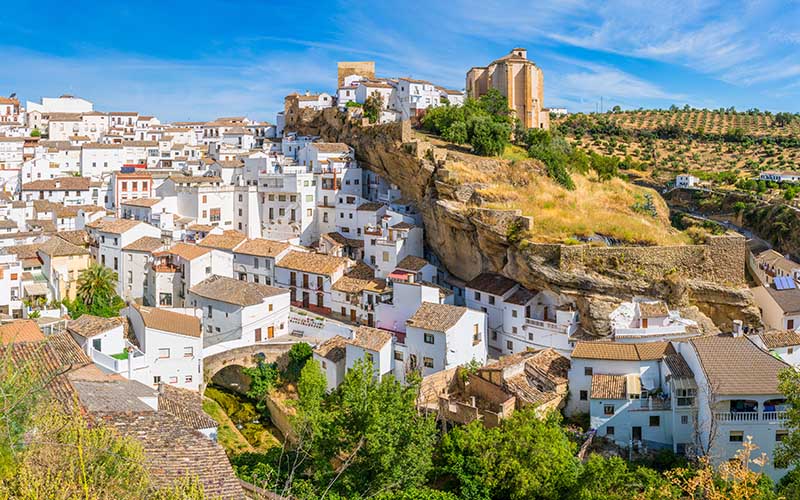 The remains of an underground cistern can also be seen, which is partly dug in the rock. Also, some vestiges of the walls that protected the town have been preserved.

Nearby is the Church of Nuestra Señora de la Encarnación (15th-17th centuries). It was build on an old mosque of late Gothic and Renaissance style. Inside, there is an image of the Crucified and a painted altarpiece in which the life of Christus, contemporary to the construction of the temple, is told. Furtheremore, the casulla gifted by the Catholic Monarchs of Spain to offering the first Mass is preserved.

Nevertheless, the most characteristic feature of Setenil de las Bodegas are the Abrigos bajo roca. As said before, that is the name to call the houses that are built without carving the rocks. They are cold in summer and they preserve the hot in winter thus. 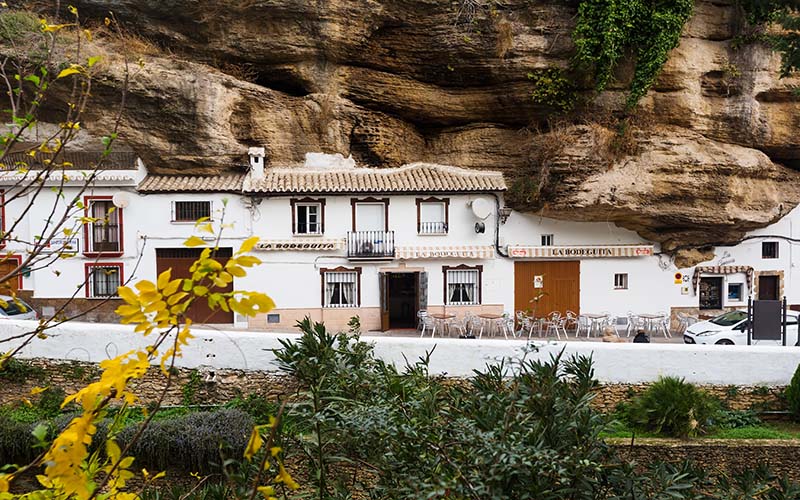 It is also worth visiting the spectacular Mudejar coffered ceiling held inside the Old City Hall (16th century). The building now holds the Tourism Office. 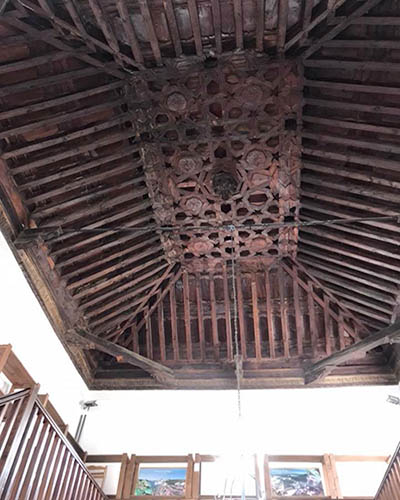 The Virgen del Carmen, Patron Saint of the village, is kept inside the Hermitage of the Virgen del Carmen, located in the Barrio del Cerrillo. Near the village is the late Gothic Hermitage of San Sebastián (15th century), first Christian building there. According to the legend, during the final siege of Setenil, Isabella I of Castile gave birth to a child. Althoug he finally died, he was called Sebastián.

There are no problems to park in the vicinity of the the urban area.

Andalusia, cádiz, white villages
It may interest you...