Castro Caldelas Castle is undoubtedly the most important fortress in the Ribeira Sacra. The construction of this fortification, also known as the Castle of the Counts of Lemos, dates back to the 14th century. During the Irmandiña Revolt, like most Galician fortresses, it was partially destroyed; although it played a decisive role in that battle that marked the whole province. After that, it was rebuilt, welcoming within its walls different personalities, such as Sol Stuart in the 19th century. As well as the De Alba family from 1777 and throughout the 20th century.

The site on which the castle was built also has a long history; as there is speculation that it may have been inhabited by a pre-Roman village. This is evidenced by two megalithic necropolises that indicate human life 4,500 years ago. The castle was built on top of that civilisation by Pedro Fernández de Castro with the idea of protecting his new territory after ceding the lands of Caldelas to Alfonso IX. He thus founded the house of Lemos and carved the coat of arms of his surname on one of its walls.

The story of Castro Caldelas Castle 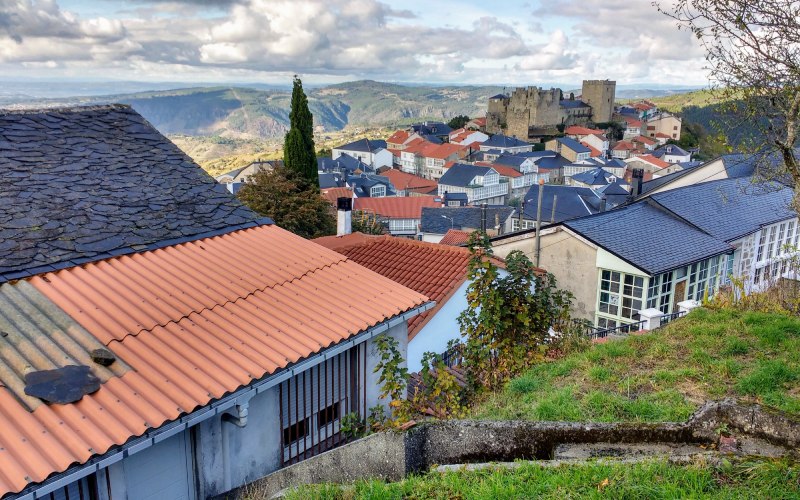 Castro Caldelas, with the castle in the background. | Shutterstock

The castle of Castro Caldelas was built between 1336 and 1346. In the oldest known writing in Galician language, Alfonso IX himself explains how he grants the right or charter to every inhabitant of the town of Castro Caldelas. Pedro Fernández de Castro built his own keep; although he lost it and the whole castle in the war between Enrique de Trastámara and Pedro I the Cruel. However, he would later return to his home through marriage.

The castle played an important and totally relevant role in the greatest conflict of the 15th century; the famous Irmandiña Revolt. It was between 1467 and 1469 when the Irmandiña forces took and destroyed the castle; which at that time the 1st Count of Lemos, Pedro Álvarez Osorio, was trying to defend. Once the revolt was over, the Count forced the town to rebuild the castle in its entirety, but the abuse was such that the population denounced him before the Audiencia of Valladolid, who found in his favour. It was not until 1550 that the work was completed to convert this war castle into a place more akin to a palace.

The secrets of its construction 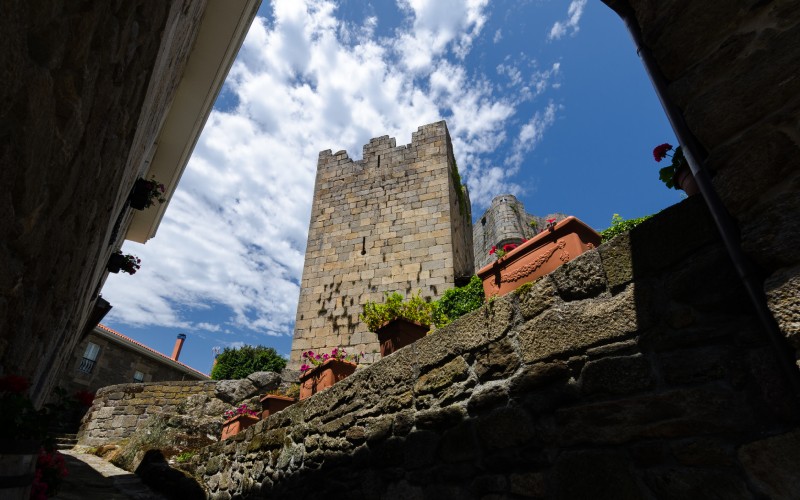 The castle of Castro Caldelas has undergone many reforms, reconstructions and remodelling throughout history. However, we can highlight its polygon-shaped ground plan and its two perpendicular lines that form the walls. It also has two towers inside, the northern one being the keep with its three storeys and terrace. If we look outside, we can see three quadrangular towers; one of which is the oldest part of the fortress that has been preserved, and also the most famous, the Clock Tower. This clock is still preserved with its original mechanism, which is worth seeing.

If we look at the right wing, its difference lies in the fact that its purpose was more for lodging than for defence. It was built in the 16th century and is composed of large windows and a proportioned hall worthy of the finest palaces. In some areas of the wall, you can see the typical “conchas de viera”, typical of the Pilgrim’s Way to Santiago. There are also stonemasonry marks and some of the tau symbols embraced by the house of Lemos. Likewise, you can find some five-pointed stars; which seems to indicate that there were also Jews around the place at some point in history.

The legends surrounding the castle 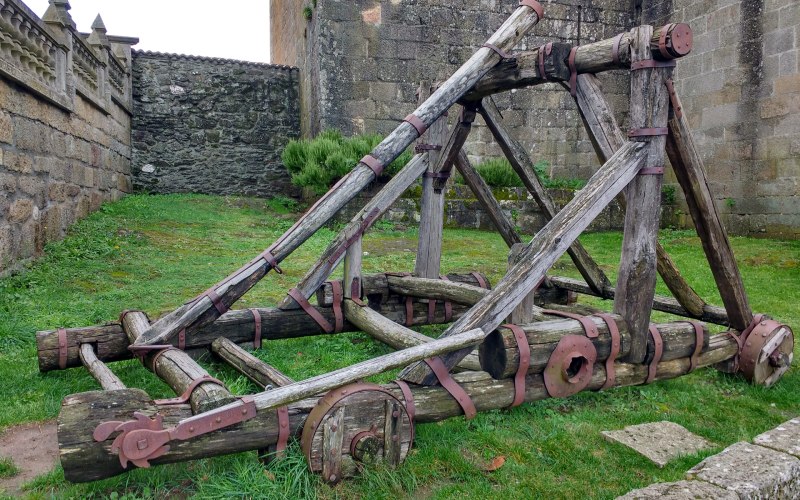 Catapult of the castle of Castro Caldelas. | Shutterstock

There are countless tales surrounding the castle throughout its seven centuries of history. Like the time in 1809 when the locals set fire to the fortress in retaliation against the French during the war of independence. This was the outcome of the last military chapter in the castle’s history; after an attack by the 15th Division of the French General Marchand. Although there are also those who say that it was the other way around, and that, after the attack by the inhabitants, it was the general who ordered the castle to be set on fire as revenge. In any case, as a result, all the historical documents that were kept there were lost; leaving a large part of history reduced to ashes.

It is equally interesting to know the origin of the name of the village. The legend comes from the Middle Ages, when the lord of a castle near the village offered, as was the tradition at the time, one of his daughters to the lord of O Castro in order to join forces and grow in territory and power. The latter, on learning that he had three first-born daughters, asked him “cal delas”, which means “which one?”. This fact, added to the fact that the castle is located in the castro where the village is located, gave rise to the name that we all know today.

What to find on a visit 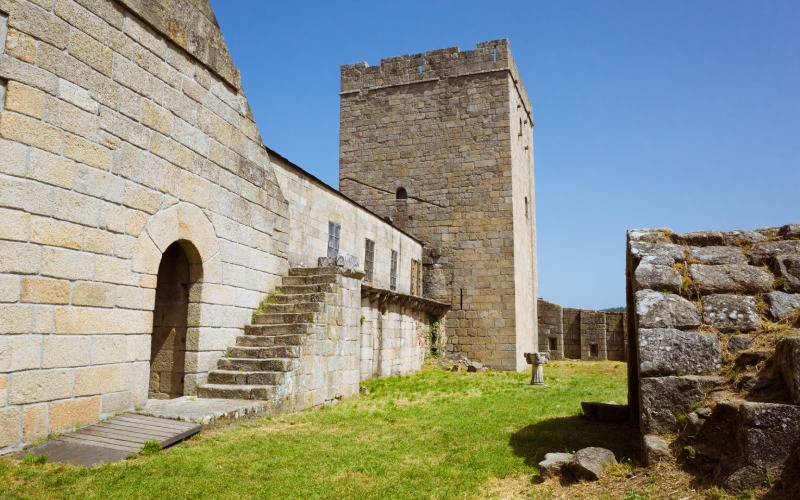 One of the gates of the castle of Castro Caldelas. | Shutterstock

The major remodelling of the castle took place in 1991 when it was ceded to the town council of Castro Caldelas. Nowadays, inside the castle we can find the municipal library, the tourist office, the assembly hall and of course, the museum. Unfortunately, however, it cannot be visited at the moment; as it is in the process of being refurbished as of 1st January 2021. But the museum is worth a visit, as it occupies two floors and contains not only interesting facts and objects from what was once the house of Lemos, but also fabrics, small pieces of jewellery and ceramic pieces dating back to the Middle Ages. You can even find such unique pieces as a candlestick for the dead or wooden crutches with leather supports.

castles, Galicia, Ourense
It may interest you...