The coat of arms is one of the main symbols of Spain along with its anthem and flag. Heraldry has evolved a lot since its origins centuries ago. In any case, the current one is from 1981, when it was approved by Royal Decree. Its colours, on the other hand, were officially established by the same means the following year. However, the history of the Spanish coat of arms has left many models associated with the different monarchs, dynasties and governments that have ruled the country.

The elements of the Spanish coat of arms

These heraldic symbols were born around the 12th century to recognize nobles in combat. At that time, they were displayed on the shield. Soon after, in the 13th century, it was consolidated as a hereditary element. Its popularization made the coat of arms to be used in tabards or flags. Despite the fact that they were initially individual, matrimonial unions made it necessary to join several coats of arms into one; dividing the central space of the coat of arms. These parts are known as quarters.

The current one has four sections belonging to the main kingdoms that eventually gave rise to Spain. Each of them has its own origin. Thus, the coat of arms of Castile and Leon are of the “talking” type. In this way, they literally represent their name. This is a tricky relationship, since in the case of León its name does not come from the animal, but from a deformation of the “Legio”. 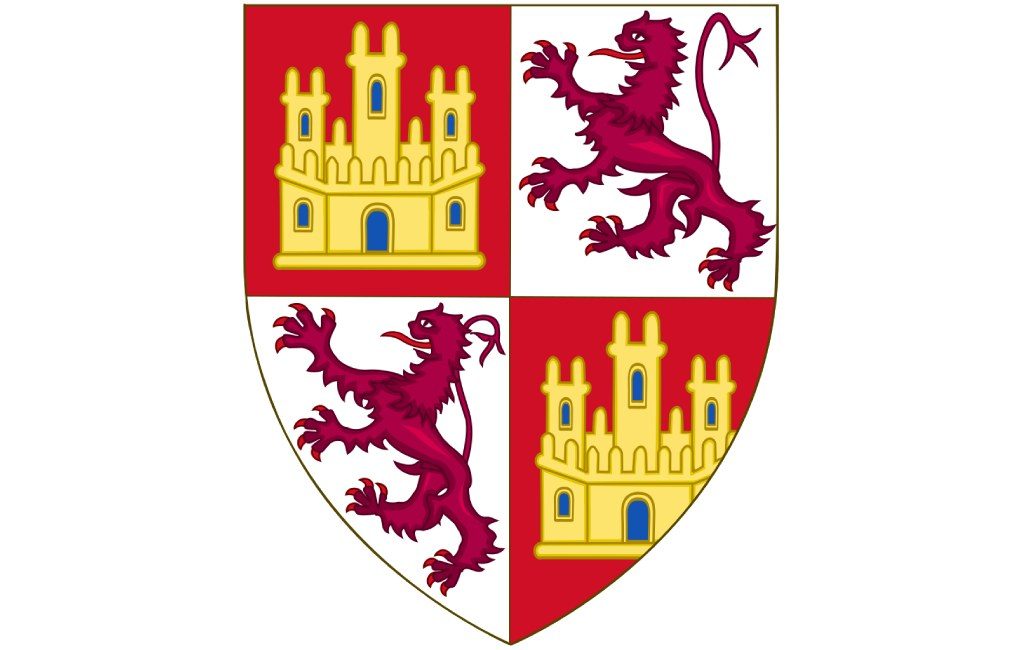 Arms of Ferdinand III the Saint.

On the other hand, the quarters of Aragon represent the kingdom with the traditional four bars. This symbol did not become stable until the 15th century and has its roots in those of Ramon Berenguer IV, Count of Barcelona and Regent of Aragon. Finally, the coat of arms of Navarre is included with its arms, the chains. These were not originally such, but were studded to reinforce the shield in combat. Their arrangement on spokes is known as a block. This design was linked to a legend about the action of Sancho VII in the Battle of Navas de Tolosa. In it he cut the chains that protected the Muslim general’s tent. This is why the studs were eventually replaced with links.

In addition, the lower curvilinear triangle, the arms of the Kingdom of Granada are found. They were incorporated at the time of the Catholic Monarchs. The whole is ruled by an escuson or over shield with Bourbon fleur-de-lis, representing the reigning dynasty. In this respect, the crest is a royal crown, which shows the type of national sovereignty.

The supports, on the sides, are the columns of Hercules with the motto “Plus Ultra“. Charles V was responsible for incorporating this symbolism associated with the Discovery of America. Until then, the mythical columns placed by the Greek hero in Gibraltar marked the limit of the known world. From this came “Non Terrae Plus Ultra/No Land Beyond”. The discovery of the new continent broke the paradigm and became part of the history of the Spanish coat of arms. The columns display the Spanish and Holy Roman Empire crowns, in reference to the imperial past.

Coat of arms of the Catholic Monarchs

Although it is difficult to establish the origin of what is today conceived as Spain, its coat of arms has its main reference in that of the Catholic Monarchs and that of their grandson Charles V. Ferdinand II of Aragon and Isabella of Castile joined their arms in a unique element. Held by an eagle of San Juan, the Queen’s favourite evangelist born in Madrigal de las Altas Torres, it has a royal crown. It was used by Ferdinand III the Saint on her behalf. He contributed the four bars and the shield of Aragon-Sicily, which combined the Aragonese coat of arms and the eagle of the Hohenstauffen, the imperial dynasty of the Holy Empire. 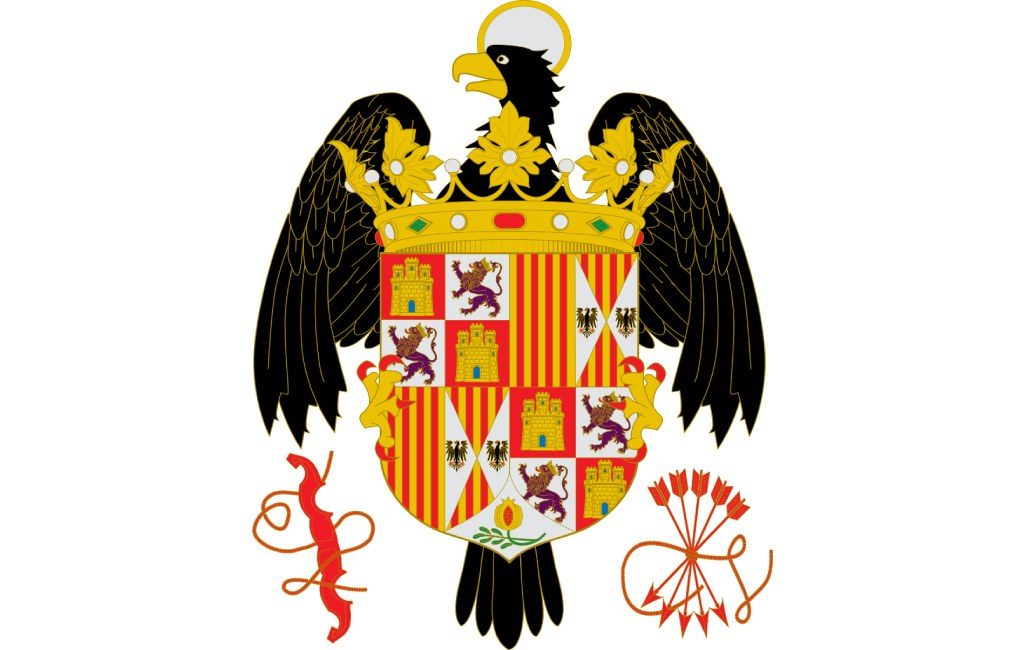 The Catholic Monarchs’ coat of arms, great influence on the history of Spain.

Once they took Granada, their symbol was placed in the same position it occupies today. As an accompaniment, the emblems of the monarchs used to accompany the coat of arms. These were the yoke with the Gordian knot of Ferdinand and the bundle of arrows of Isabella. After the Queen died in Medina del Campo, her husband born in Aragón updated her coat of arms. Throughout the history of the coat of arms of Spain it would maintain the personalist nature of its beginnings, although at the end of the 19th century it would obtain a more state-like status.

The coat of arms of Charles I and the Austrias

The Catholic Monarchs succeeded in having Charles V, thanks to a clever marriage policy, opt for the throne of the Holy Roman Empire. In addition, through his father Philip the Handsome he obtained various possessions. This resulted in a severe complication of his heraldry. Therefore, it was not unusual to use simplified versions of the coat of arms, without repeating quarters, as is the case today. Given his continuous acquisitions since he landed at Tazones, near Villaviciosa until his decline at Yuste, there were also many local modifications.

The most outstanding element that Charles V contributed to the coat of arms of Spain was the columns of Hercules and the motto Plus Ultra. As mentioned above, it reflected the expansion overseas. Likewise, the imperial crown, today on one of the two columns, is also due to him. In addition, he introduced the Golden Fleece into the equation, also inherited from his father. This order of chivalry is among the most prestigious in the world and since Philip the Beautiful has had the Spanish monarch as Grand Master. The necklace is part of the personal coats of arms of the kings and the royal house. 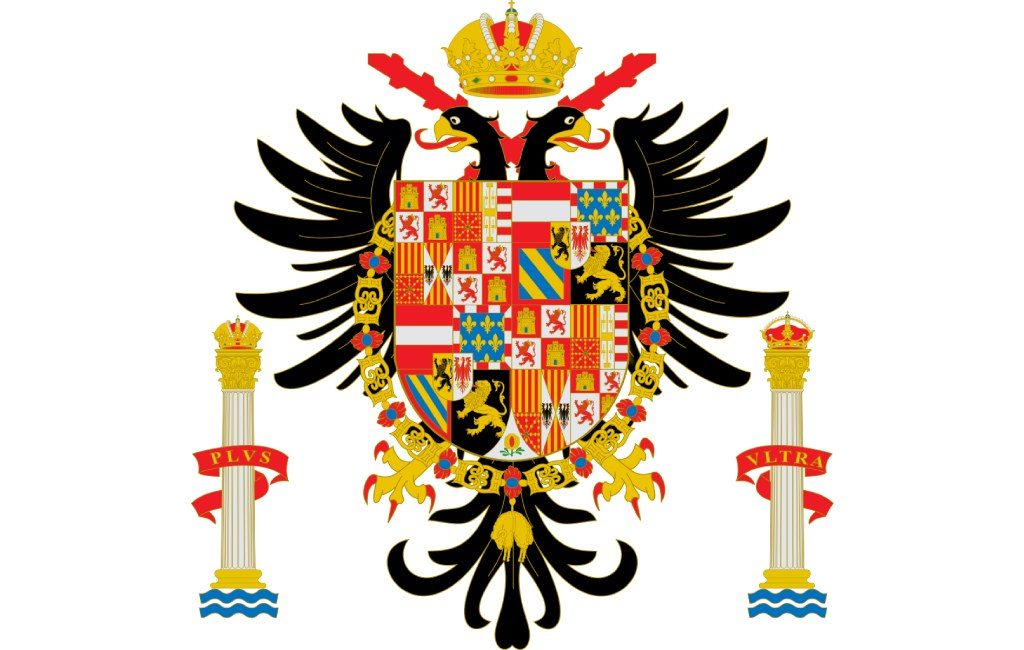 Coat of arms of Charles V.

The two-headed imperial eagle that holds the coat of arms of Spain and the Burgundy cross stand out, inherited from the paternal grandfather and grandmother respectively. In addition, the quarters of Navarre and Naples were added in several designs. As for the latter, on top were those of his mother, who was imprisoned in Tordesillas, similar to that of the Catholic Monarchs. Below, those of his father. The paternal quarters included the arms of Austria, the two Burgundians, Brabant, Flanders and Tyrol.

The Habsburg dynasty would still bring another addition, the coat of arms of Portugal. Philip II was responsible. It was the coat of arms of the Spanish monarchy until the Portuguese became independent. The monarch also changed the crown and eliminated the two-headed eagle; as he was not the emperor of the Holy Empire. The columns of Hercules were also removed. Otherwise, there were not too many changes.

When Charles II the Bewitched died in the Royal Alcazar of Madrid without any descendants, the subsequent War of Succession ended with the House of Bourbon-Anjou in power. Philip V would introduce changes to the coat of arms of Spain that would show its French origin, such as the necklace of the Order of the Holy Spirit. Besides including the Bourbon arms in the centre, as in the present one, he moved to the lower part those of Flanders and Tyrol. He recovered the columns of Hercules and began to use as an added motto “A solis ortu usque ad ocasum/From sunrise to sunset”. 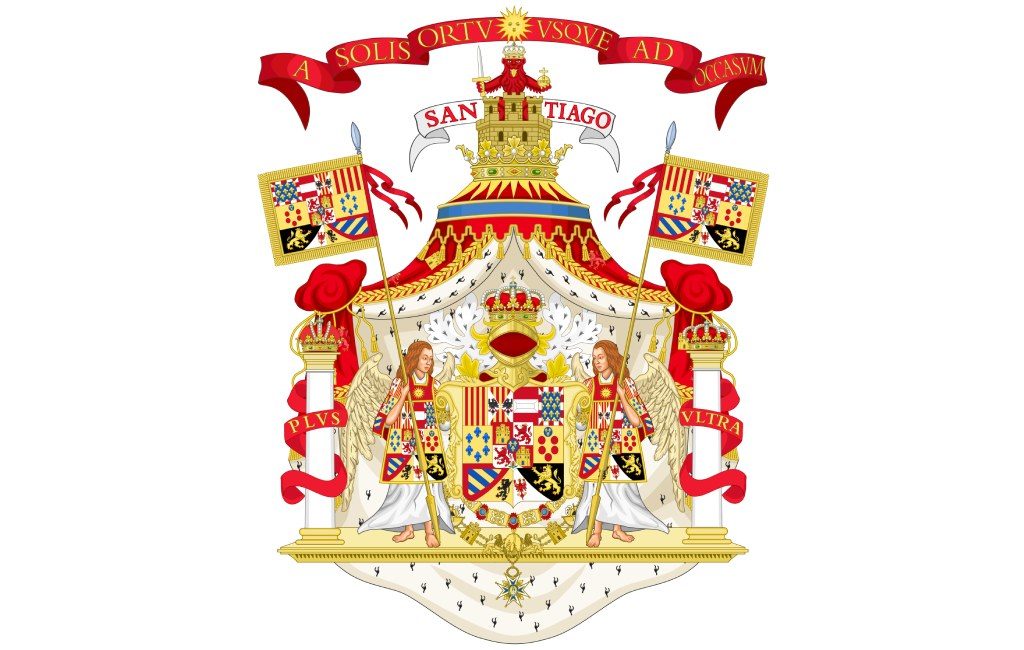 However, Charles III was one of the greatest innovators in the history of the Spanish coat of arms. The quarters of Parma and Tuscany were an obligatory inclusion. Nevertheless, the great change was to center the coat of arms of Castile and Leon. This was a reflection of their policies and the centralist reforms they introduced. In this way, the rest of the quarters, and therefore territories, symbolically surrounded the main one. Its reduced version only had the Castilian-Leonese quarters and the arms of Granada, being the main inspiration for the current design. Likewise, the Order of the Holy Spirit was replaced by the one that created it with its own name. 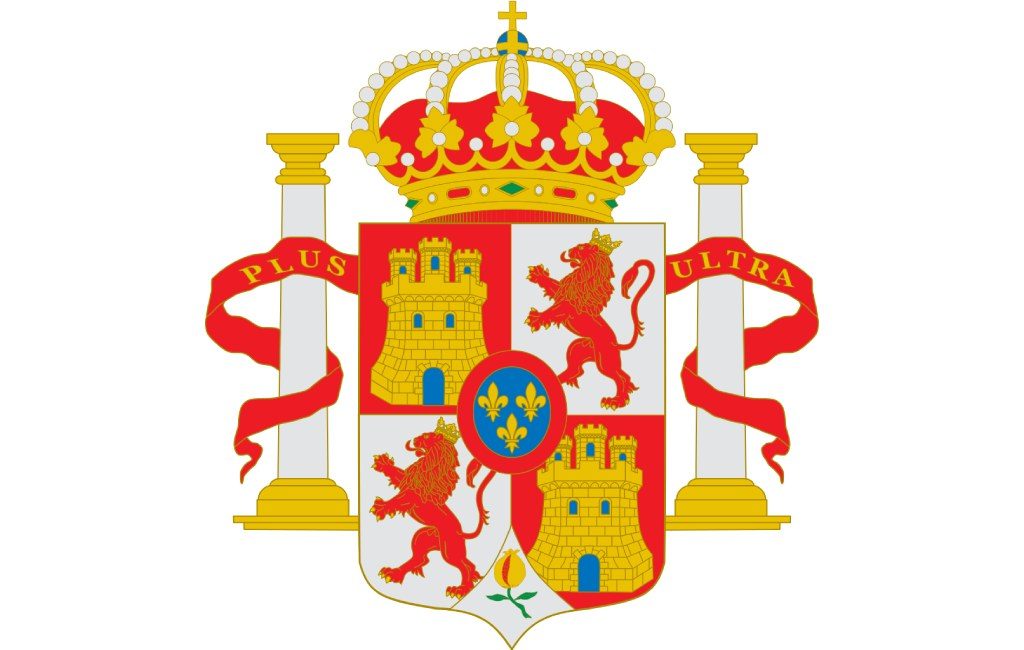 The result pleased Charles III’s successors, who did not touch the design. Thanks to this, it was preserved until Isabella II. However, during the brief reign of Joseph I Bonaparte, he created a new heraldry. The shape of the coat of arms is similar to that used by the Bourbon-Anjou, but he decided to use six quarters. It was the first coat of arms to generally include the arms of Navarre and the territories on the other side of the Atlantic. 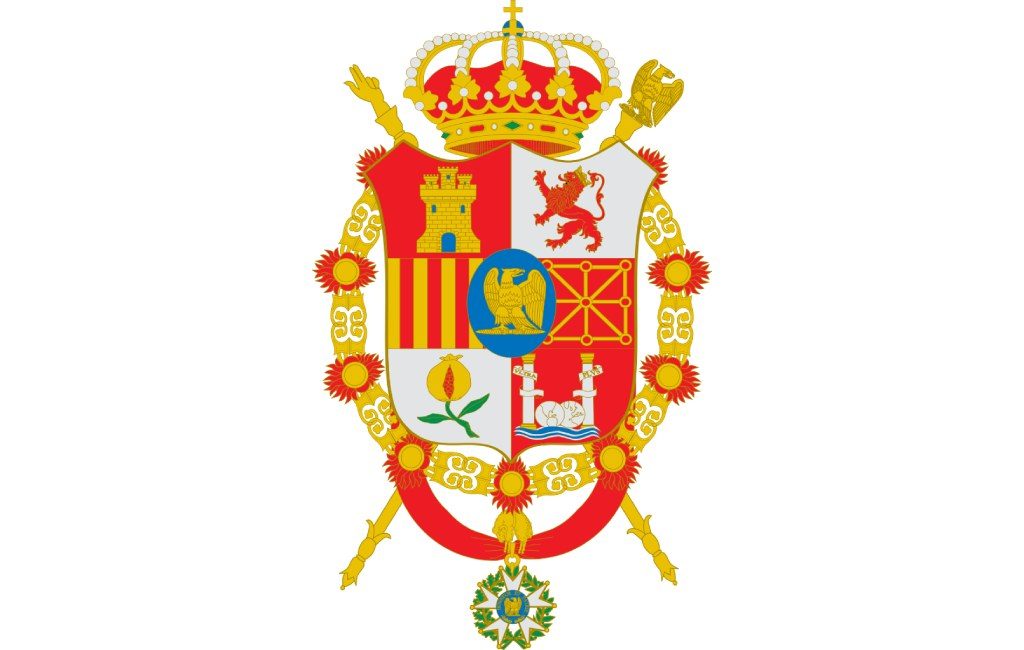 Coat of arms of Joseph Bonaparte.

The standardization of the Spanish coat of arms

The governmental unrest of the last third of the 19th century gave rise to the bases of the current Spanish coat of arms. It was the Provisional Government of 1868, headed by General Serrano and led de facto by the Reussian General Prim, who decided that a national shield had to be generated. Thus, one was created with a very similar shape to today’s and with the four quarters and the status described above: Castile, Leon, Aragon, Navarre and Granada. The columns of Hercules, without crowns, and the Plus Ultra remained; with a civic or mural crown at the top, similar to a castle. 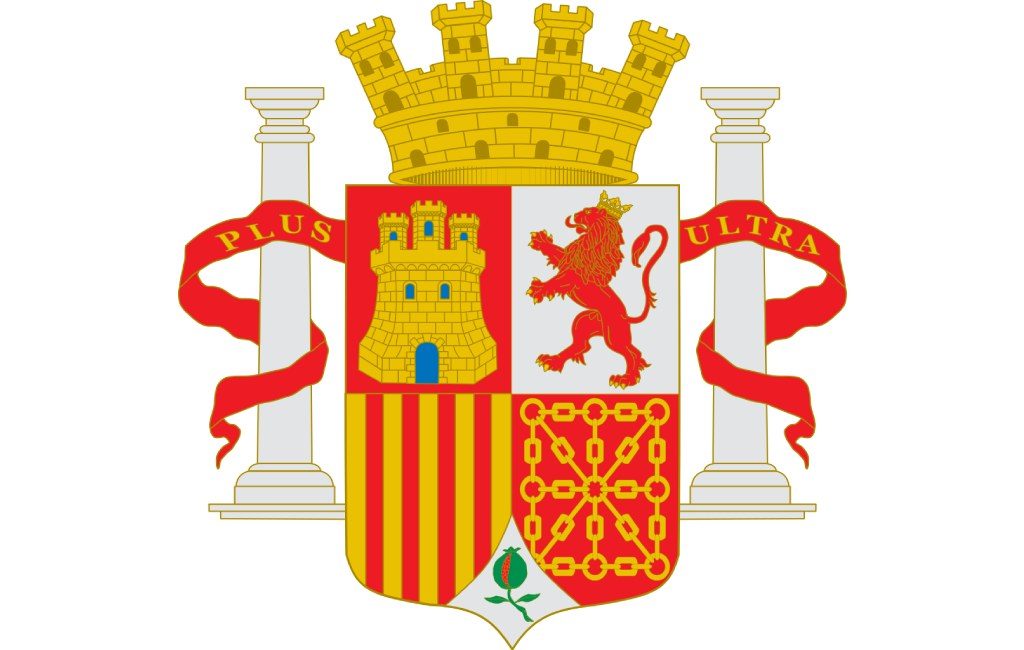 Spanish coat of arms during the Provisional Government.

Such design flourished in the history of the Spanish coat of arms, with slight modifications. In this way, it was used in the I and II Republic with the small difference that in the latter the symbol of Leon appears uncrowned. The arrival of Amadeo of Savoy in Madrid, favoured by Prim, after landing in Cartagena, did not imply important modifications, only that the crown of the crest became royal and the central inclusion of Savoy’s coat of arms. 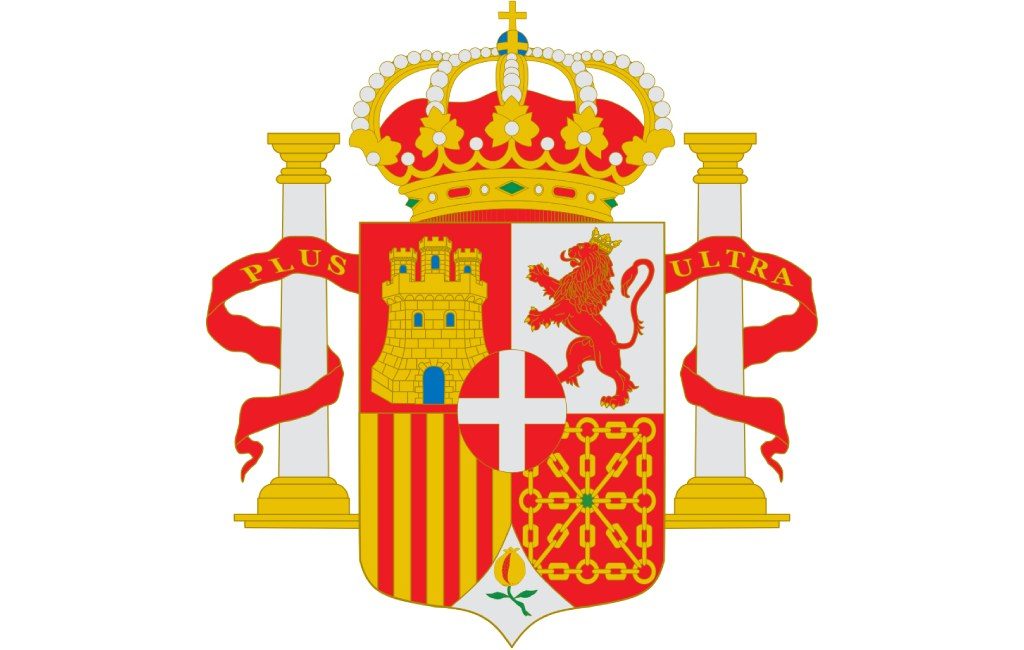 Spanish coat of arms during the reign of Amadeo of Savoy.

For its part, the Restoration brought about a heraldic chaos that reached its zenith in 1931. The discarded quarters returned in 1868 and the arms of the Bourbon-Anjou family. The disaster of 1998 made the A solis ortu usque ad occasum disappear. The last reform included the modern barracks in the centre surrounded by all the historical ones. All this made it very difficult to associate a coat of arms with the Spanish state. 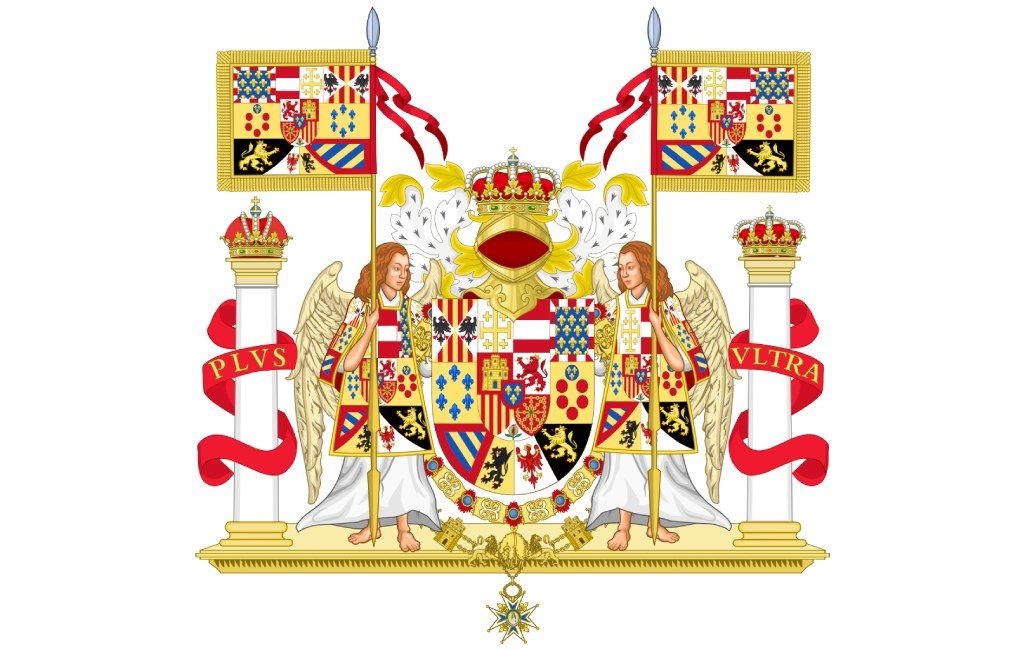 Ornamented coat of arms of Spain in 1931.

The Spanish coat of arms during Franco’s dictatorship

After the 1936 coup d’état, the rebel side generated a very varied national mythology and symbolism. From Burgos’ Cid Campeador to Viriato or Sertorio, the regime drank from any mystique within reach. The legends of the past were key for Franco and his clique. Thus, a new stage in the history of the Spanish coat of arms took place. The Catholic Monarchs, perhaps the dictator’s most important figures, were at the centre of this new design.

There were few differences with the coat of arms of Isabella and Ferdinand. For example, instead of the Aragon-Sicily quarter, the Navarre one appeared. On the other hand, the yoke and arrows had a new connotation. Not in vain, they were the symbol of the Spanish Falange of the JONS. The motto “One, Great and Free” also draws attention. The two official versions that were given during the dictatorship were joined by another one without duplication of quarters. 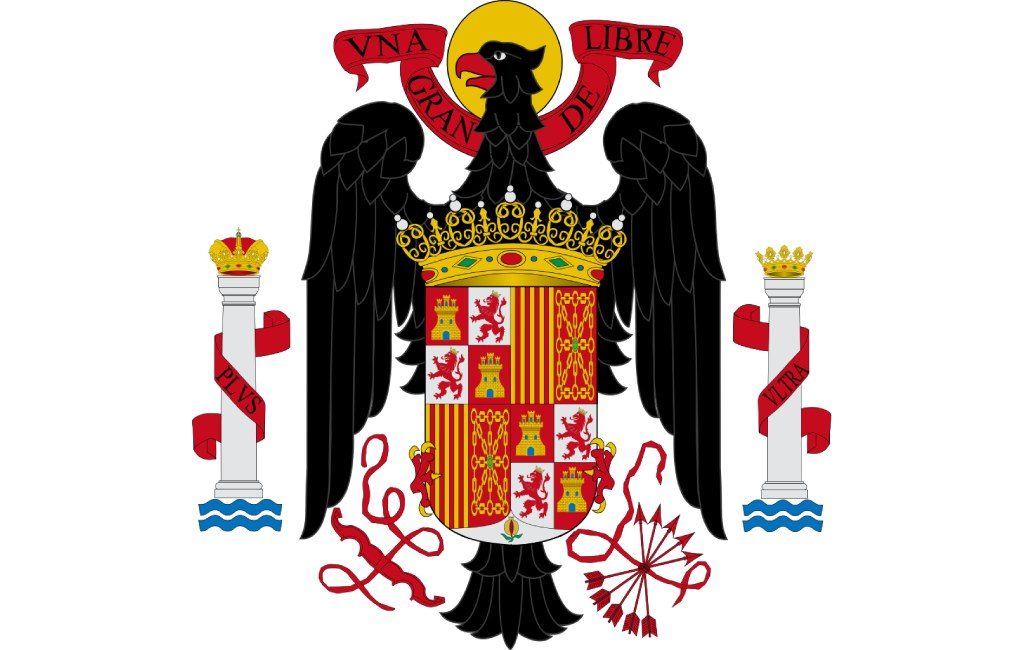 It should be noted that the Francoist coat of arms continued to be the official one in the first years of democracy. Only in 1981 was approved the Royal Decree that closes, at the moment and with which it established its colors a year later, the history of the coat of arms of Spain. 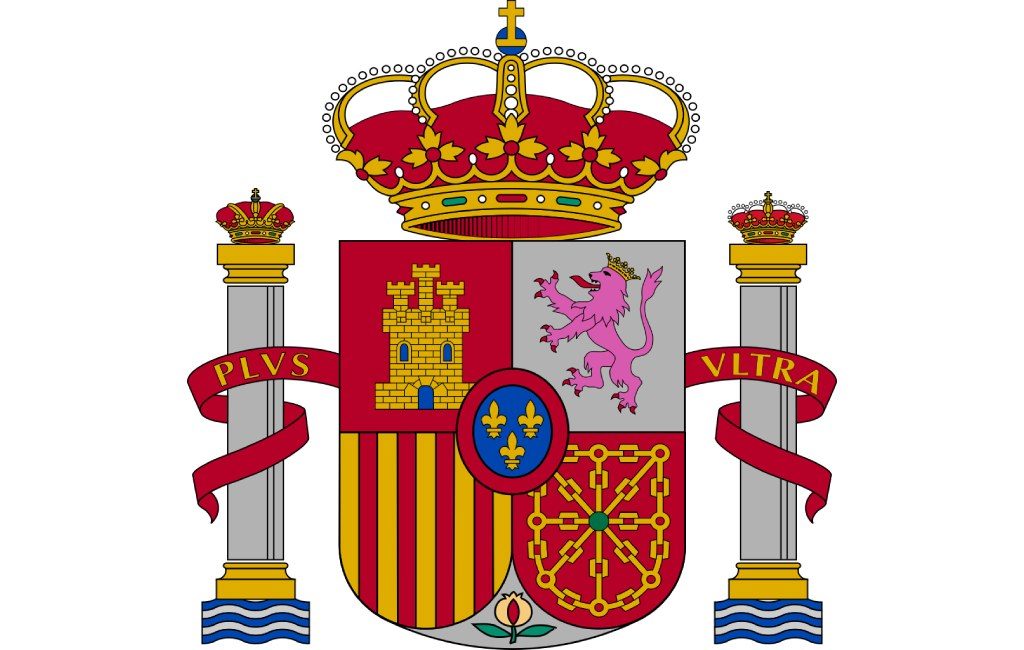 Coat of arms of Spain at present.