The tradition of nativity scenes in Spain seems to come from Saint Francis of Assisi. On Christmas Eve 1223, in Greccio (Italy), Saint Francis organised the first Nativity scene. But it was not of figures but a representation with living beings, with a real donkey and mule. And this representation of the nativity scene became a tradition among the Franciscans and Poor Clares; soon reaching some European towns. The appearance of the figure nativity scene is much later, around the 15th century; and it seems that it was in Italy. Below, we show you historical nativity scenes that over the years have become unique pieces that we can enjoy every Christmas.

Tradition says that this nativity scene, the oldest in Spain, arrived in Palma de Mallorca in legendary circumstances. The story that is told begins with a boat in the bay of Palma; in a great storm and with a promise of salvation. And the story seems to be true; it was the year 1536 and the ship’s captain was called Domingo Gangome or Janceme and among the cargo were seven nativity scenes. On that dark night, at the mercy of a strong storm, the captain promised God that he would give one of the seven mysteries, the one they chose, to the one who would offer them light on land. The light they first saw was that of a Franciscan convent outside the walls that kept a light on all night. It was the Monastery of Nuestra Señora de los Angeles de Jesús. And there remained the figures of this nativity scene, attributed to the Alamanno brothers.

In 1835 the convent of Nuestra Señora de los Angeles de Jesús was disentailed and the nativity scene was moved to the Church of La Anunciación in Palma, where the Santo Cristo de la Sangre is venerated. The figures in this nativity scene are made of wood; and ones of Saint Joseph and Mary are 1.42 and 1.18 metres high. The six angel musicians with musical instruments: harp, zither, portable organ and flute, measure an average height of 80 cm. Then, the mule is 1.30 m. and the ox is also bent over. Above the cave there are three shepherds, approximately one metre high. One blows the horn, another beats a drum and the third grabs a barrel with both hands. There are 9 sheep alternating black and white and two large black dogs with spiked collars.

It is the Neapolitan nativity scene promoted by Charles III and his wife Maria Amalia of Saxony. This tall, sturdy queen, with a fair complexion, blue eyes and very blonde hair, was the granddaughter of Emperor Maximilian of Austria. She liked to be called by the French name of Amélie; although she would go down in history as “the Queen of Bethlehem“.

She had only been in Spain for three months when, on Christmas Day 1759, she promoted one of the most deeply rooted traditions in Spain since then. The wife of Charles III set up her beloved Neapolitan nativity scene in the Buen Retiro Palace in Madrid (the Royal Palace was not yet finished) and showed it off proudly. 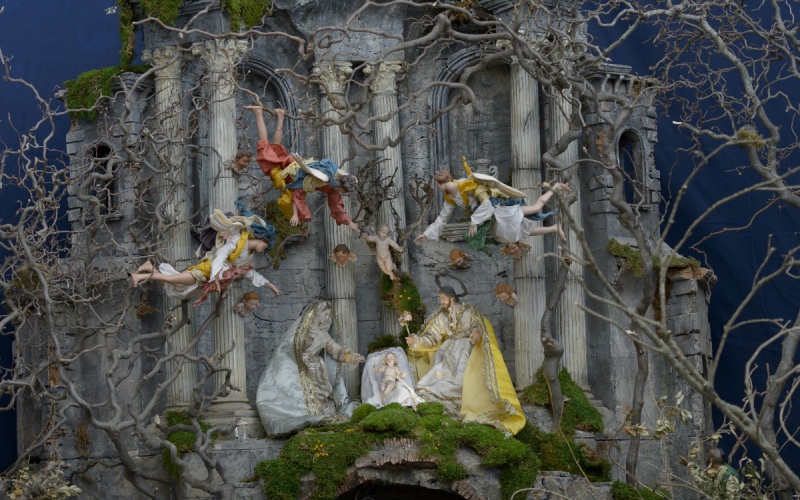 The nativity scene of the Belén del Príncipe. | Patrimonio Nacional

She had brought the pieces with her from Naples; where she had lived since they were married in 1738 when she was only 14 years old. An arranged and happy marriage. The couple had 13 children, five of whom died within a few years of their birth. But it was the only Christmas Eve Maria Amalia spent in the capital. A year later and at only 35 years old, she died of tuberculosis, giving the “only displeasure” to the King in her life, according to Charles III himself, who survived her 28 years but never remarried. 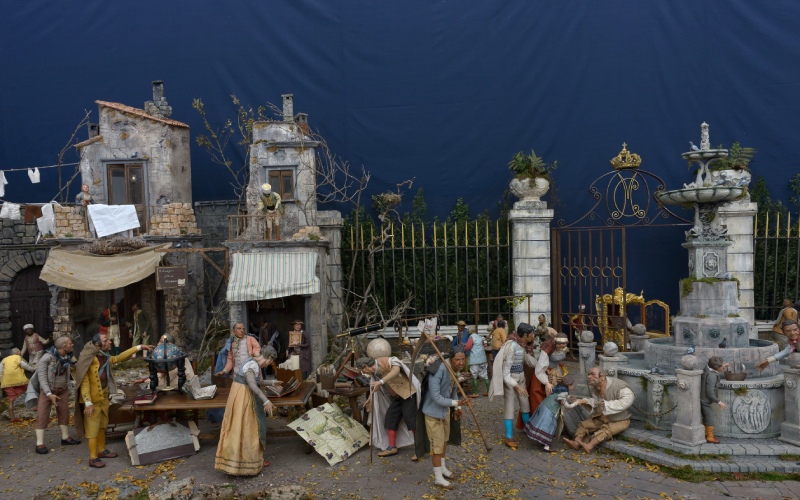 This first nativity scene improved with the participation of great Spanish sculptors such as José Ginés and José Esteve. It now has more than 4,000 figures and was a gift to the Infante Don Carlos, which is why it is known as the “Prince’s Nativity Scene”. Some of the pieces that have been conserved from this nativity scene can be seen for free at the Royal Palace in Madrid every Christmas. 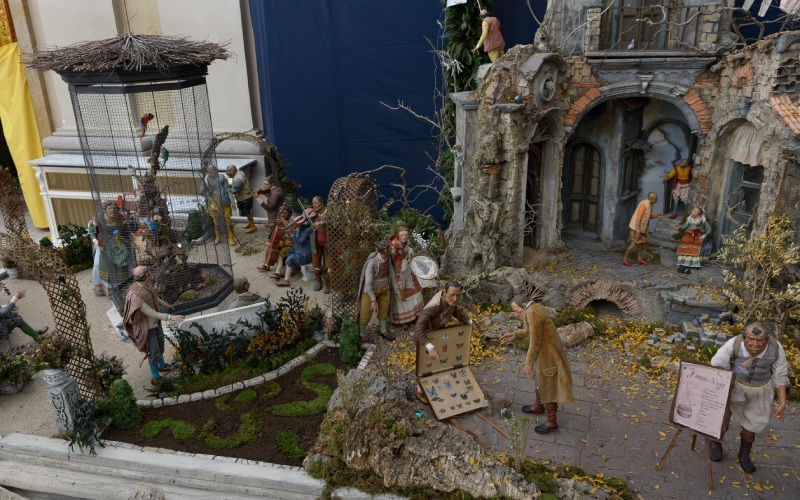 Another scene of the Belén del Príncipe. | Patrimonio Nacional

Dated around 1570, it was a gift from the Italian city of Trapani to Philip II. All the figures in it are carved in coral, silver and bronze. Its author is unknown. The monastery of the Descalzas Reales was founded later, in 1559, by Joanna of Austria; sister of Philip II and widow of Prince John Emmanuel of Portugal. 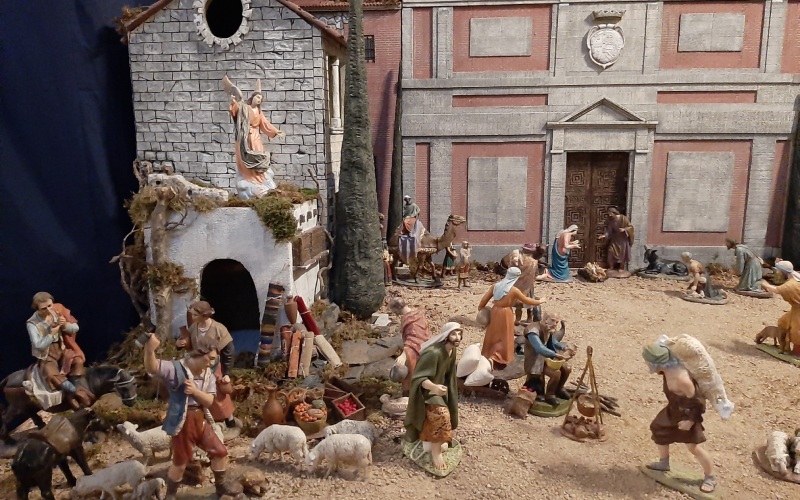 A scene of the Descalzas Reales nativity scene. | Patrimonio Nacional

The Nativity Scene of the Agustinas Recoletas in Salamanca

It is a Neapolitan nativity scene with large articulated figures; dressed in satin clothes embroidered with gold and silver threads. Dated around 1646, it was a gift from the Count of Monterrey and Viceroy of Naples, Don Manuel de Zúñiga y Fonseca, to his daughter Inés de Zúñiga, born in 1640; who was sent to the convent at the age of four. The setting is a 17th century charro house.

In the 17th century many examples of nativity scenes appear in temples and monasteries and even in private homes. The works of the Sevillian Luisa Roldán, called “La Roldana“, sculptor of the kings Charles II and Philip V, should be highlighted. Her Sevillian father trained her in post-conciliar religious sculpture. She made sculptures both life-size for processions and in wood or baked clay with polychrome. She also made others of small devotional groups for individuals and convents, with great movement and expressiveness characteristic of baroque art. Roldán is also known for the numerous terracotta nativity scenes in Italian style; liking those that formed a scene of the Nativity as a united sculptural group.

Also noteworthy are the wax figures of the Mercedarian monk Friar Eugenio Gutiérrez de Torices; described by the Italian painters Mitelli and Colonna as “miracles of nature”. Works by the latter sculptor can currently be seen in the Museo Nacional de Artes Decorativas in Madrid. The La Roldana nativity scene from the poster announcing the Seville 2016 Parade is located in the Escuela de Cristo.

A real turning point in the development of the Hispanic nativity scene was the set commissioned in 1776 from the sculptor Francisco Salzillo by Don Jesualdo de Riquelme, a rich Murcian nobleman who, after a trip to Madrid, became enthusiastic about the art of nativity scenes. The famous artist recreated the history of the coming of Christ to the world, in a popular setting taken from the pastoral environment, with popular types from the Murcian garden, and inspired by the engravings of popular costumes, work of the famous engraver Juan de la Cruz. Today it can be admired in the Salzillo Museum in Murcia.

On the other hand, the biggest biblical monumental Nativity scene in Europe, formed by more than 7000 pieces, is located in Jerez de los Caballeros (Badajoz). It is also worth mentioning the Mudejar-era nativity scene in Seville, which has emblematic buildings in the city, such as the church of Ómniun Sánctorum, Santa Catalina, the tower of San Marcos or the Palace of the Marquises of La Algaba. Finally, we would also like to highlight the Nativity scene in Ocaña, Toledo, which tells the History of Salvation from the creation of mankind to the resurrection of Jesus. It is a spectacle of image, light and movement; in which for forty minutes the figures move to recreate to the biblical scenes.

Christmas, history
It may interest you...

Ermita of Santa Elena | A Weekend Getaway
The Pyrenees are a land of legends. Thousands of kilometers that boast places marked by Más información

Los Millares, a sacred place | 7 Wonders of Ancient Spain
The archaeological site of Los Millares is not only as old as time itself; it Más información