5 Most Festive Christmas Cities in Spain.

Some people in Spain decorate their homes during the first weekend in December. Others, however, feel the spirit of Christmas at the beginning of November. Nevertheless, we all know that Christmas has arrived when the Christmas lights turn on.

Lately, some Spanish cities compete for being the city with the largest number of Christmas lights. Therefore, we have made a ranking including the cities that have spent the most on lighting in 2019. In order to calculate how much money each city has invested, we have divided the total expenditure among its inhabitants. Will your city be among the Spanish cities with the largest number of Christmas lights? 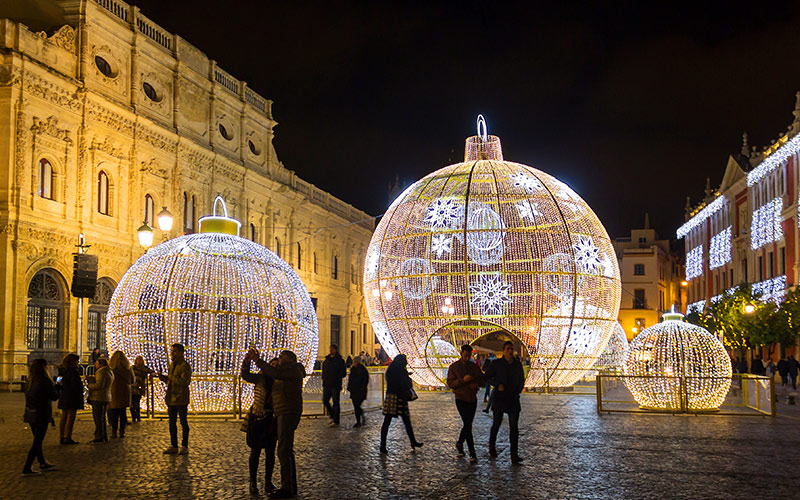 Christmas in Seville is amazing. Although it is ranked last, there is a huge number of Christmas lights in its streets. The decoration includes lights of different shapes and large coloured structures.

As has become a tradition, the illuminated motifs are different in each street. The most decorated streets are Avenida de la Constitución, Tetúan, Sierpes, Laraña or Imagen, as well as Alfonso XII, Campana, Plaza del Salvador and Asunción. Seville has thus become one of the most decorated cities in Spain. 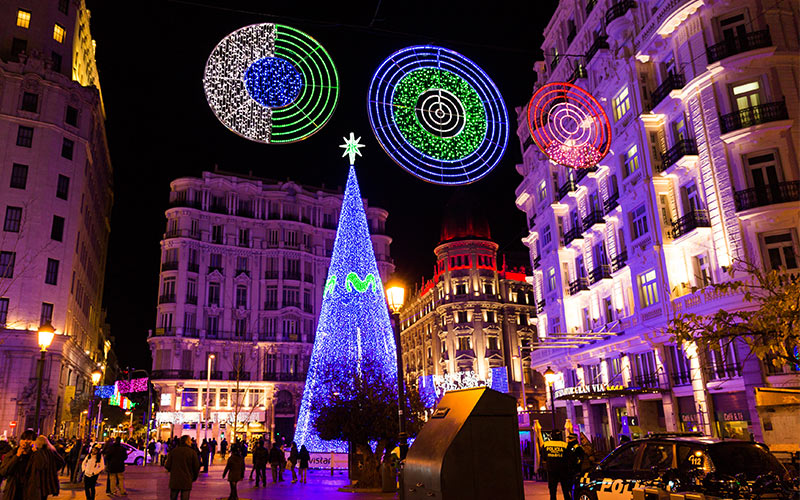 Madrid decorates its streets and illuminates every nook of the city. More than 7 400 000 LED lights illuminate the walk to the people of Madrid as well as to tourists who come to enjoy Christmas in Madrid. As in previous years, the lights and paper chains are the greatest protagonists. They illuminate not only the streets but also the trees and public spaces. However, this year we should emphasize the presence of the illuminated nativity scenes in Puerta de Toledo, Puerta de Alcalá and Puerta de San Vicente, as well as in the entrances to the Plaza Mayor and the Calle Segovia Viaduct. 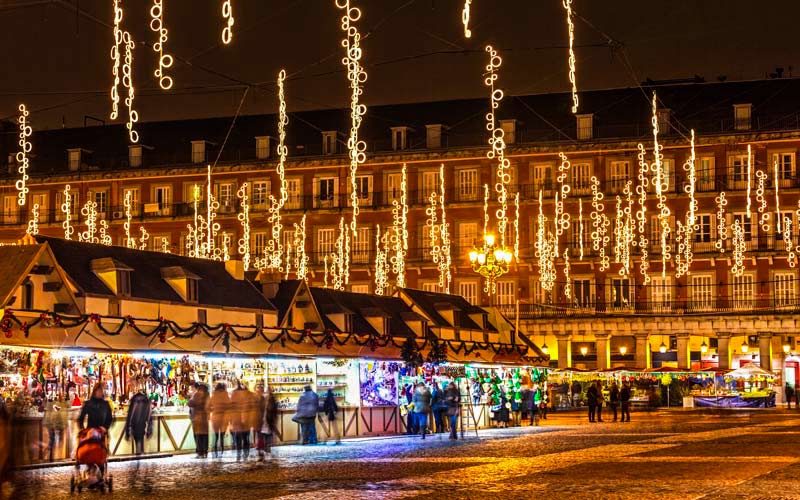 In order to keep dreaming with the best Christmas lights, Madrid has placed a 12 meters light sphere with 43,000 LED lights between Alcalá Street and Gran Vía. Furthermore, Gran Vía is one of the most outstanding locations to enjoy the Christmas lights in Madrid, as well as Preciados, Arenal and Carmen streets and the Plaza Mayor. The best way to enjoy the lights is on board the already mythical Naviluz. 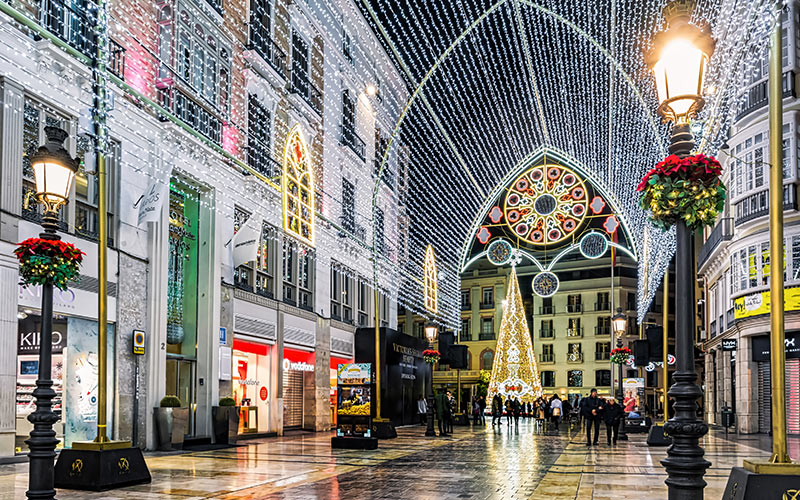 Málaga ranks third. The symbolic Larios street was aimed to recreate a magical forest in which suns, angels and autumn leaves can be seen. The decoration of this street has 730 000 lights. There are also classic Christmas musicals that accompany the light show. Songs such as “En Navidad”, by the boys from the Academy of Operation Triumph with Rosana or “All I want for Christmas is you” by Mariah Carey are played there.

In addition to the lighting of the adjoining streets, 7 giant Christmas trees are placed throughout the city of Málaga. The Teatro Cervantes, Huelin Park or Alcazabilla Street are some of the locations chosen to place these Christmas trees. The most anxiously awaited is the one on Plaza de la Constitución. Expectations are always high since last Christmas it was 18 metres high. 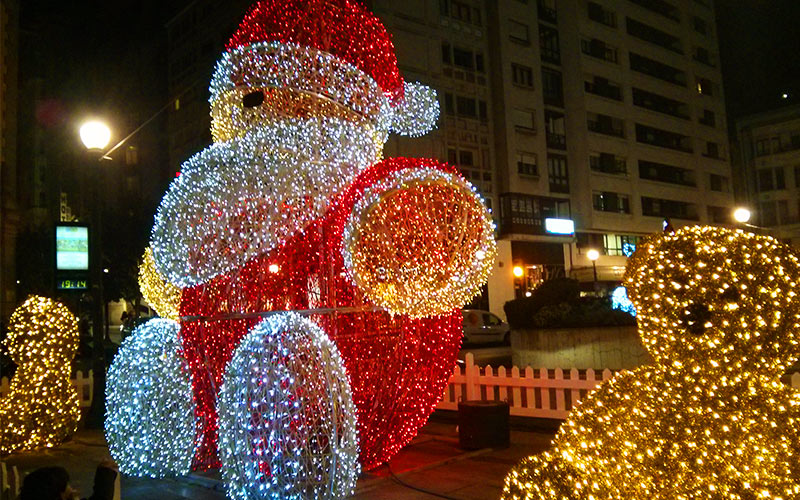 The silver goes to Gijón. This Asturian city has spared no expense this year in order to transform its streets into a scene of Christmas lights. The number of decorative elements has increased and more streets and neighborhoods have therefore been decorated. 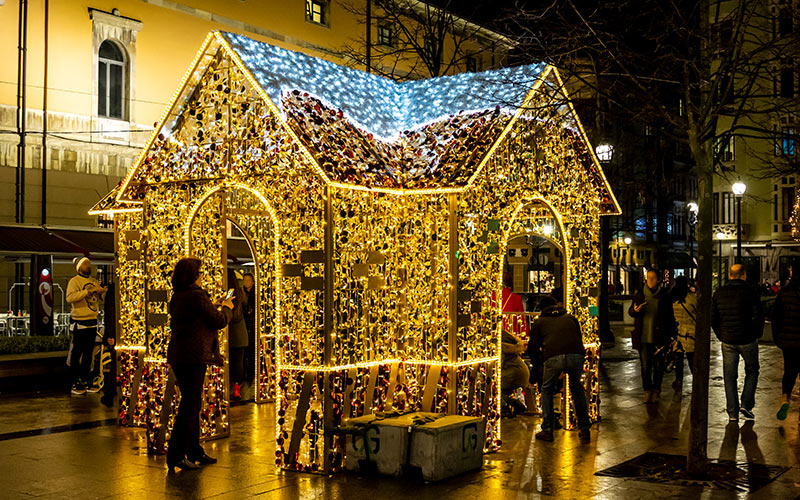 To the almost 40 new streets and areas that illuminated this year, we must add the increase in the number of three-dimensional decorative elements. In addition to last year’s decoration, 18 new elements have been placed: a pine tree and a gift in the park of Las Palmeras; a pine tree in Cuatro Caminos, in front of the Ateneo de La Calzada; and a gift inside which you can walk in the plaza of Sara Suárez Solís. Furthermore, a tree has been placed in the Plaza de Villamanín.

The old decorations are placed in the city centre. Some are the cone programmed with lights and music, the globe inside which you can walk, hollies and pines…  On the other hand, a pine and a tunnel of leds has been located in the park of the Fábrica del Gas. 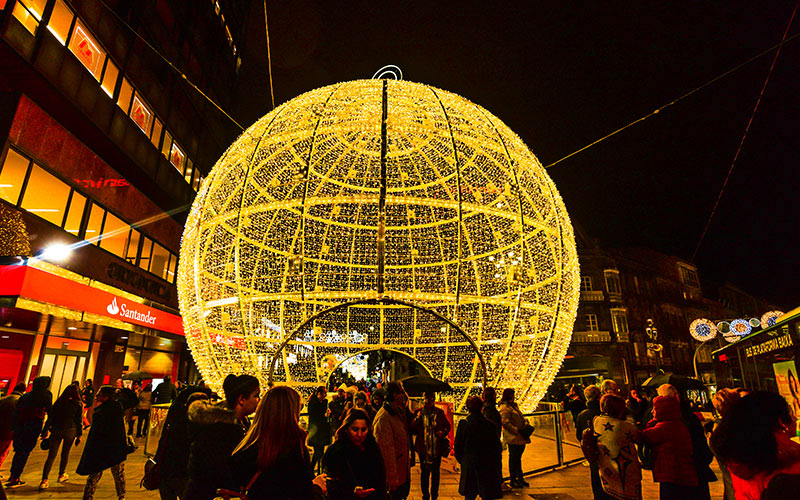 We already know that Vigo celebrated Christmas in style, as could not have been otherwise. This city in Pontevedra deserves the top 1 in our ranking of the cities in Spain with the largest number of Christmas lights. In total, no more and no less than 10 millions LED lights have been turned on to children’s delight (as well as older ones). 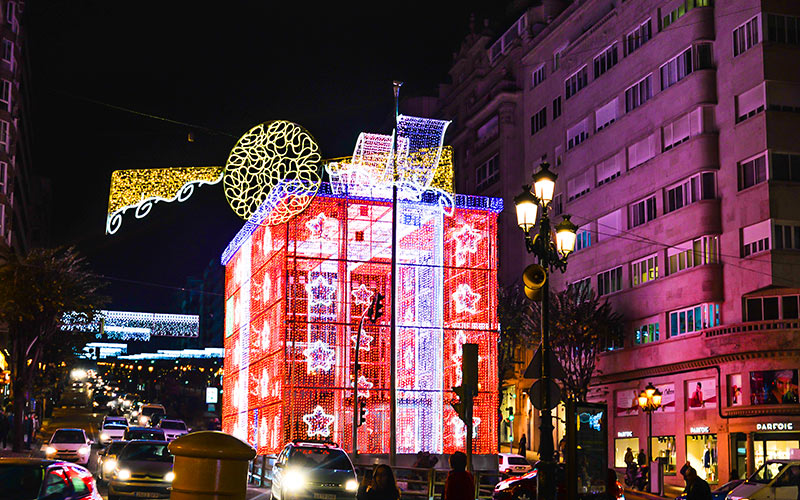 It seems that this year the city has decided to exceed the expectations created last Christmas, and that was very complicated. In addition to the huge Christmas tree located in the Porta do Sol and all the Christmas lighting in the streets, this year there are more newnesses. A 60 metre high big wheel with 250 000 lights is one of the most awaited surprises. There are also a Columbus’ Christmas ball, a Rosalía de Castro’s snowman, 465 trees, a gift box in Gran Vía, among others.

Although strolling through the beautiful illuminated streets is an excellent plan, another option is to visit the large Christmas market of crafts and gastronomy in which it snows. WHAT? Yes, it snows thanks to 50 machines that throw artificial snowflakes every hour.