There are some Spanish towns that could be part of a Dickens’s book. Whether by its snowy landscape or by its illuminated streets, the Christmas carols or its festive atmosphere, the trip will take you back to your childhood, the time when we all thought that everything is possible at Christmas. Have you ever visited any of these Christmas towns?

One of the most beautiful towns to visit at Christmas is Briviesca. It is the capital of the region of ‘La Bureba’, in Burgos. In winter Briviesca is sometimes covered with a blanket of purely white snow surprising the neighbors and those who visit it. The Plaza Mayor, surrounded by two rows of trees, is the main spot of the village. When it snows, the village turns magical. It is the perfect time to make a beautiful snowman or take a picture in the shrine, the most characteristic symbol of the village, dating back from 1909. 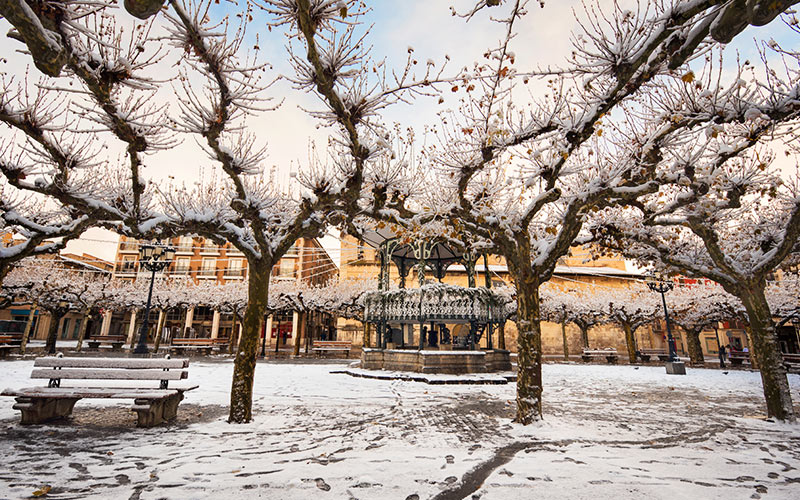 The nativity scenes are an essential part of Christmas, and in San Lorenzo de El Escorial know it. Thousands of people visit this village located in the surrounding area of Madrid these days. They look forward to visiting the nativity scene with life-size human figures. It covers around 5,000 square metres with figures and a nativity arranged by the main streets. 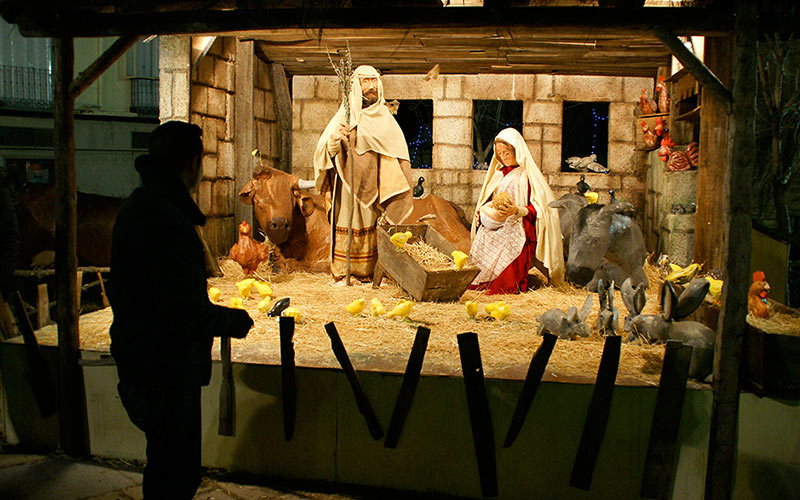 There are many charming towns in Teruel such as Rubielos de Mora, Albarracín, Cantavieja or Calaceite, among others. In this case, Valderrobres has a very romantic atmosphere at Christmas. The village is filled with snowy falling paths and roofs, the smell of wood smoke emanating from the fireplaces and delicious Christmas treats. 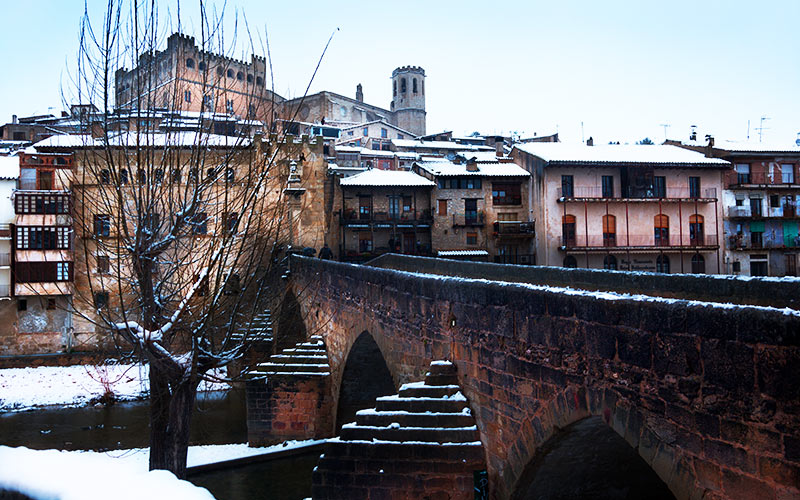 Benasque is located in Aragón, Huesca. The Benasque Valley, the centre and heart of the Pyrenees, is also known as the “Hidden Valley”. Here are the Aneto and the Natural Park of Posets-Maladeta, the highest glaciers in the Pyrenees. In conclusion, a mountain village where losing yourself is a fantastic experience. 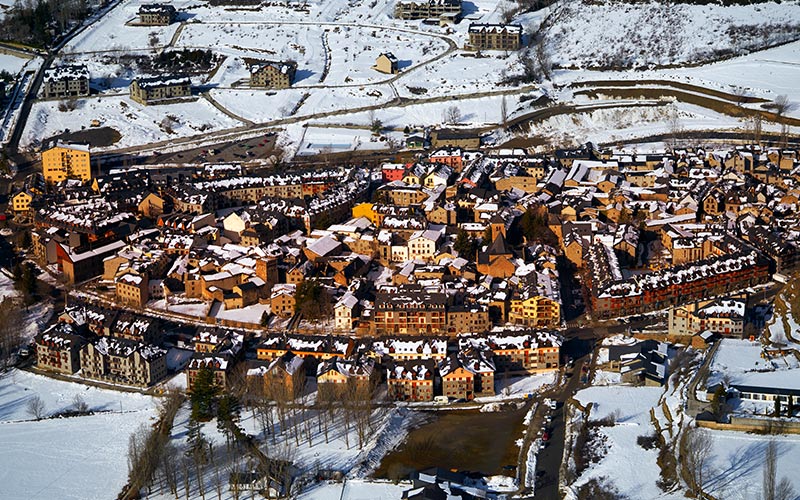 In Guadalajara is located a fairy-tale town to visit at Christmas, Albendiego. It is a small town of 43 inhabitants close to the black villages, which are worth visiting, especially at this time of year.

In this case, the hermitage of Santa Coloma is dyed with the colors of Christmas. A Romanesque style temple built in the 12th century, listed as an Asset of Cultural Interest. 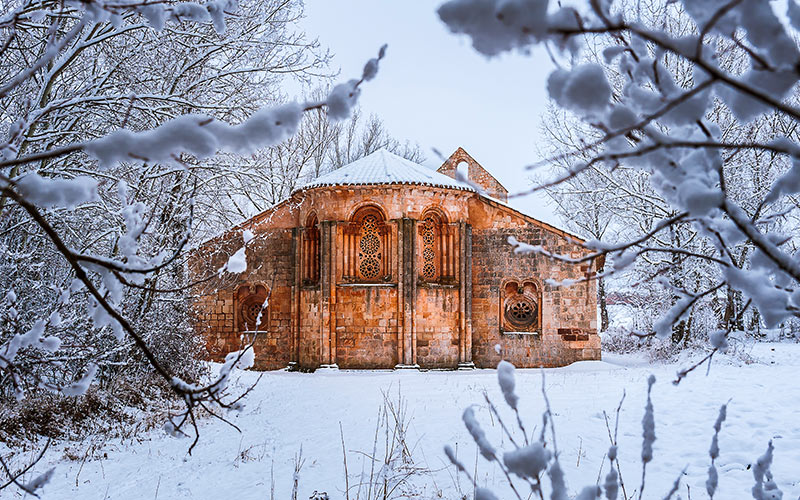 Another village you should visit at Christmas is Santillana del Mar, in Cantabria. This beautiful village makes those who visit it fall in love by day, and during these dates it is even more beautiful at night. On January 5th, the eve of the Three Kings, the neighbors represent scenes related to the birth of the child Jesus.

The celebration begins with a characteristic nativity scene competition and carol recitals in the churches. Then the Auto Sacramental takes place, in which scenes such as the Roman Edict, the announcement of the angel to the shepherds or the journey of the Virgin and St. Joseph towards the stable in Bethlehem are represented in the streets of Santillana del Mar. Finally, there is the Three Kings’ Parade, in which the meeting of the Kings with King Herod and the Adoration of the Magi in the living stable are represented. 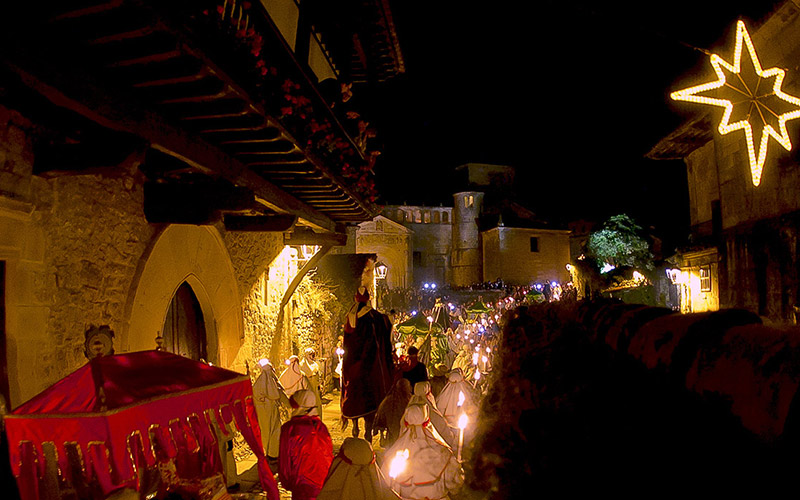 The old towns have a special attraction, especially those with a medieval origin. This is the case of Pals, a village on the Costa Brava of Girona. Its old town has a wide historical trajectory, which is formed by a villa, walls and castle. Taking a stroll around its streets you can see different gothic constructions.

When the village turns the Christmas lights on, the magic reaches every corner of Pals. Begur and Palafrugell are also worth visiting villages in Girona at this time of the year. 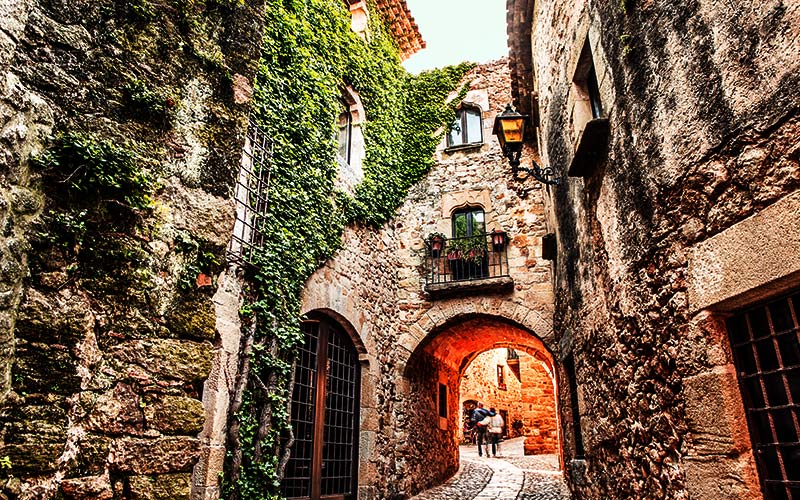 Declared a National Historic-Artistic Monument, Montefrío is considered one of the villages with the best views in the world. The village located in the province of Granada has a picturesque Christmas decoration. Furthermore, here is the Christmas Museum, an exhibition dedicated to the old Christmas decorations based on objects dating from 1870 to 1960. There you can see nativity scenes, Erzgebirge decorations, lights and candles, Christmas trees, Advent Calendars,… 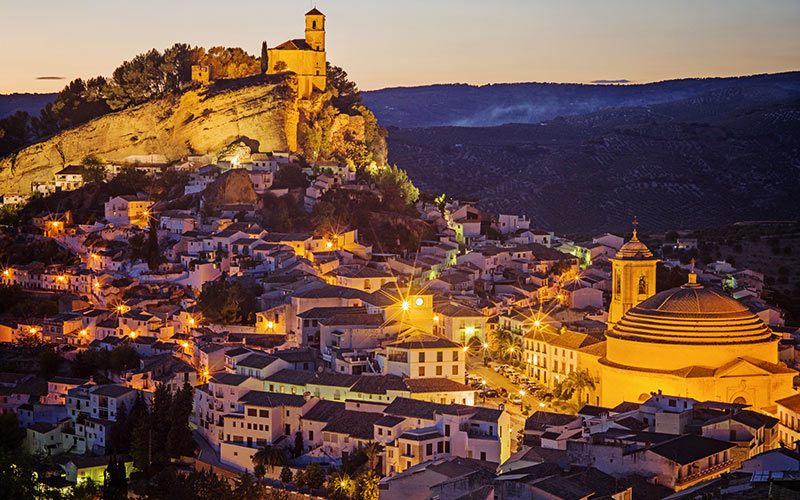