Franciscans emerged in the Middle Ages as defenders of the poor. While Rome and Compostela made luxury and opulence a distinguishing sign, St. Francis of Assisi sought exactly the opposite. A complicated position, due to his proximity to heresy, from which he finally escaped unscathed. As a result of his vision, a broad mendicant movement arose which inspired religious such as Saint Peter of Alcántara. The patron saint of Extremadura founded one of the most curious places in the country in Cáceres. The Conventico or El Palancar Convent; which the Junta Extremadura describes as the smallest Christian monastery in the world. 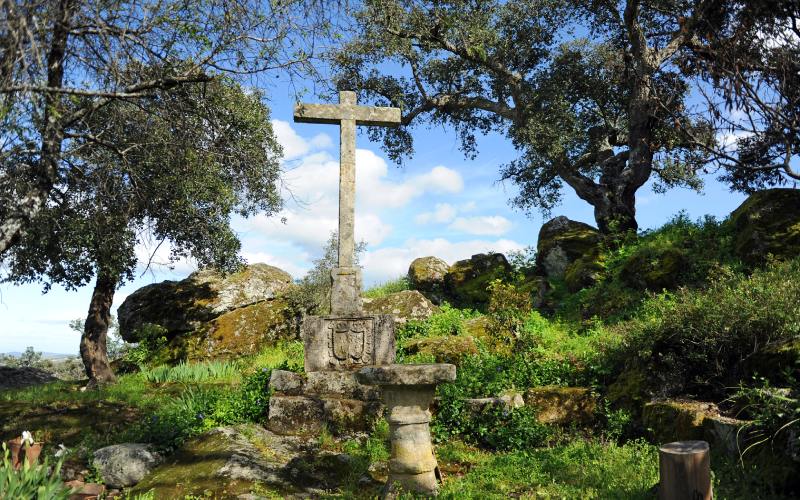 Cross outside the Conventico. | Shutterstock

A convent custom made

In his 63 years of life, Saint Peter of Alcántara was a clear example of poverty. Born in 1499, the friar combined periods in his small convents with travels. Although he did not perform acts of pomposity, he was able to meet some of the great personalities of the time. For example, he became friends with Saint Teresa of Jesus. She found comfort in her colleague’s example of austerity.

His ups and downs finally led him to Arenas de San Pedro, a beautiful village in Ávila. There, from a hermitage, a convent was built, which today is his sanctuary. Of course, what you see today, dating from the 18th century, has nothing to do with the saint’s foundation. But before that, and before refusing to become confessor to Charles I in Yuste because that would be selling himself, he built his emblematic building. A faithful reflection of his mentality, it is located in San Pedro de Acim. It is El Palancar convent.

Purely Franciscan, the original space of the monastery is still preserved. However, it should be noted that later extensions were made in the form of a new cloister and facilities. These should not be confused with the original part. This is barely 60 to 70 square metres in size. It was a small space that contained all the facilities required for a monastery: refectory, chapel, kitchen, cells and cloister. 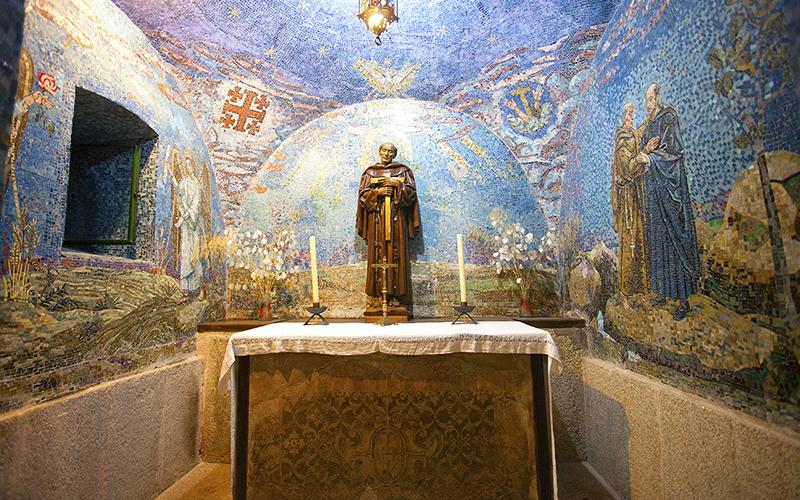 He built it in 1557 following a donation from his friend Rodrigo de Chaves. There was only a small house when he got there, but he succeeded in setting up the Conventico. He was accompanied by another friar. Between them they barely entered the chapel, according to the chronicles. It should be noted that St. Peter of Alcántara was a very tall man. He reached a height of one metre ninety, a stature that stands out today but which was even more remarkable at the time. 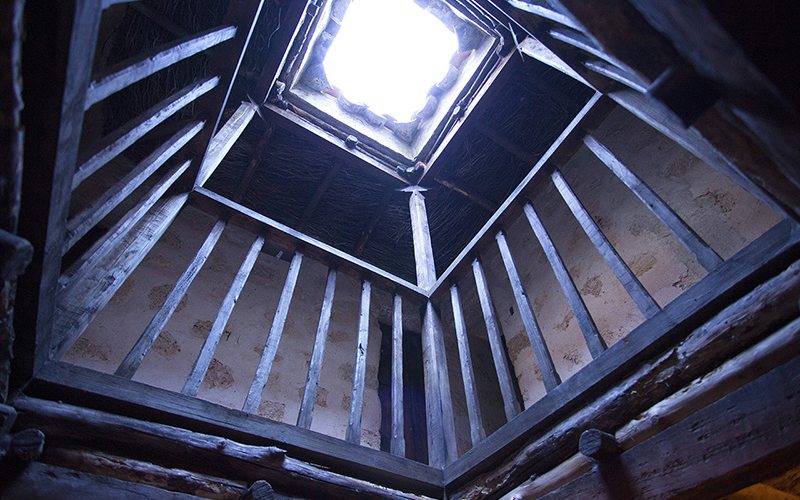 This factor makes his personal cell even more surprising. It was the smallest of all and did not even allow him to stretch out. Saint Teresa herself narrates that he spent two hours sleeping, lying down with his head on a wood. An uncomfortable and unnatural position that he held at night for some 40 years, according to the saint. Fortunately for his companions, the other rooms were somewhat larger and could accommodate a bunk bed. Quite a luxury for the  Conventico. 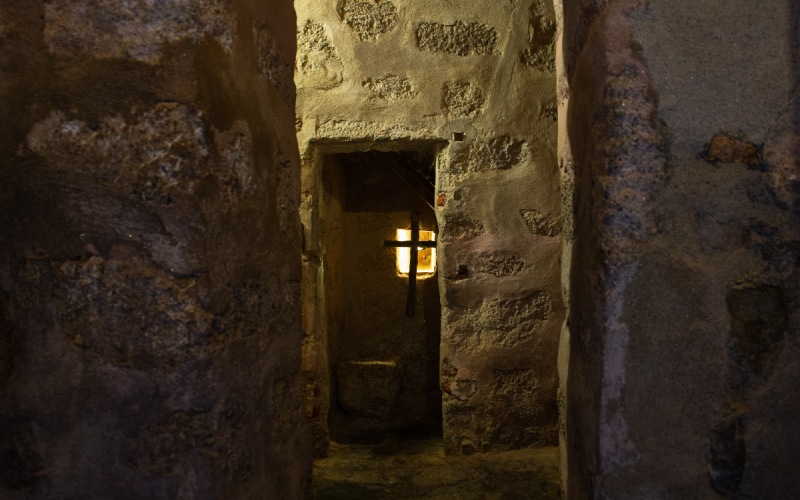 Cell of Saint Peter of Alcántara in the Convent of El Palancar. | Shutterstock

The extensions that happened to the convent of El Palancar allowed the number of friars who lived in it to increase. There are currently around ten friars. A small orchard, in keeping with the size of the original, spreads out around the Conventico. The landscape is dominated by pasture land. This is typical of this area of Cáceres, close to the provincial capital and Plasencia. Isolated, the peace sought by Saint Peter of Alcántara can be felt. 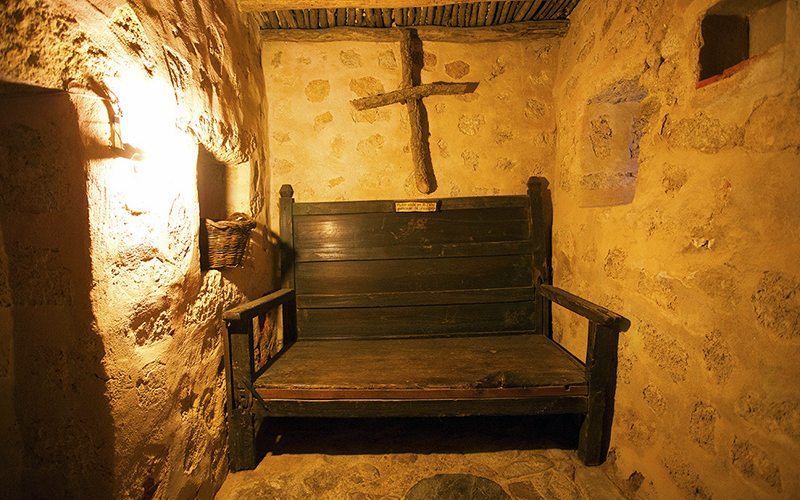 Cell of the convent of El Palancar. | Junta de Extremadura

Thanks to the community that populates the monastery, it can be visited freely and with a guide. In spite of this, it is normal to donate a symbolic amount for its conservation. The tour allows you to see the cloister, made up of just four wooden posts, one for each corner. Also the kitchen, an austere room in a condition very similar to the first one it had. It has just a few pots and pans and a hearth, around which the friars would squat down to dine with some suffering.

The chapel is striking because it retains a striking decoration based on simple mosaics. Although crude, they add a surprising amount of colour. Blue predominates, as well as an Alcantara cross. This contrasts with the sparse ochre tones that prevail in the whole. In addition, there is a figure of the saint that completes the very Franciscan space. 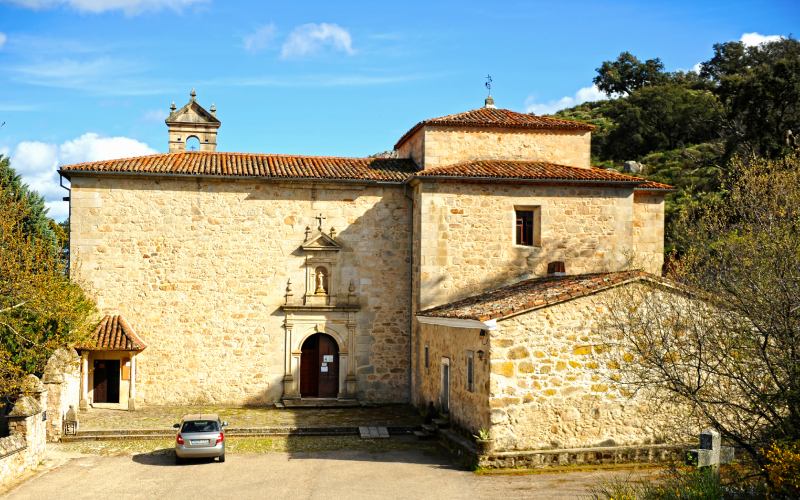 Back façade of the current Conventico. | Shutterstock

Around the Conventico there is a wide variety of landmarks that serve as a base for a visit and a getaway. For example, stops on the Vía de la Plata, Roman road and Way to Santiago de Compostela, such as Cañaveral, Grimaldo or Galisteo. In the latter, its Arab walls, in an exceptional state of conservation, are the most notable feature. The José María Oriol/Alcántara reservoir, Cáparra or the Llanos de Cáceres, as well as the Monfragüe National Park, are also alternatives that are just a stone’s throw away.

Three other alternatives are more monumental. Cáceres has a historic centre, essentially Renaissance, which is perfectly preserved. This has enabled it to become a World Heritage Site. Plasencia also boasts a huge number of monuments, including a pair of cathedrals. Coria, on the other hand, has an ancient appearance that matches its great antiquity.