The best Roman and Medieval Architecture

Perched on a high rock and surrounded by the Eresma and Clamores, there is much to see in Segovia. Segovia houses some of the most important Roman and medieval constructions, such as the aqueduct. A World Heritage city where you can feel the presence of Alfonso X, Henry IV , his half sister Isabella the Catholic and the communal leader Juan Bravo. At the beginning of the 20th century it was an international focus of culture, thanks to the artists Zuloaga and Antonio Machado.

To know what to do in Segovia, we have to learn something about its history. Segovia was originally a pre-Roman settlement subdued by Rome in the year 96 B.C. During the Empire it was a city with a military mission to control access to the Duero Valley, at a central point on the road that would later link Merida and Zaragoza.

It is possible that they installed the fortress in the place currently occupied by the Alcazar. In order to supply water to this area, where there were notable houses and at least some thermal baths, an aqueduct was built to bring water from the mountains in the first and second centuries.

From ancient times, the walled city, bounded by the Eresma and Clamores gorges, was established, as an acropolis, as a seat of power, while the valleys and slopes that spread southward were places of work.

During the Middle Ages, the city reached its peak. It was chosen as the place of residence of Alfonso X the Wise and Henry IV of Trastámara. It was there that Isabella the Catholic would proclaim herself Queen of Castile. It was the seat of the Royal Treasury and the place where the coin was minted.

There is little news about the suburbs. The population was grouped around parishes and activities, businesses or ethnic groups until specific districts were created. On the northern side, on the banks of the Eresma River, the parishes of San Lorenzo, Santiago, San Marcos, San Gil and San Blas were founded in the Middle Ages. Later, in the 15th century, the Azoguejo square became the meeting place of the suburbs, as it was the site of the market.

At the end of the Middle Ages, San Lorenzo was dedicated to the vegetable garden. It reached the walls of Segovia and the outskirts of San Justo and San Salvador. The Clamores stream, which crossed the parishes of Santa Eulalia and San Clemente, was crossed by bridges.

King Henry IV was the one who lived the most and supported the city. He was responsible for the renovation of the Alcazar and three excellent buildings. His country house (later the convent of San Antonio el Real), the monastery of El Parral and the Royal Palace of San Martín. Another important contribution was the restoration of the Royal Mint. For centuries it had been located at the end of the Aqueduct, in the parish of San Sebastián.

In the 17th century, the livestock and textile economy collapsed, going from 27,000 to 8,000 inhabitants in 1694. The creation in 1763 of the Real Compañía Segoviana de Manufacturas de Lana and the installation in the Alcazar of the Real Colegio de Artillería (1764) only mitigated its decline. In 1862 the fire of El Alcázar took place, which would be remodelled.

In 1893 the ceramist Daniel Zuloaga settled in Segovia. In 1908 he set up his workshop in the church of San Juan de los Caballeros (a site of cultural interest, important to see in Segovia). He attracts his nephew Ignacio Zuloaga to paint there.

Both of them would turn it into a focus of attraction for intellectuals and modernist artists, from the generation of ’98 and ’14. These groups popularized Segovia at an international level. In 1919 Professor Antonio Machado was transferred to Segovia. This poet would participate in the creation of the Popular University. He would be one of those who raised the Republican flag in his city hall in 1931. 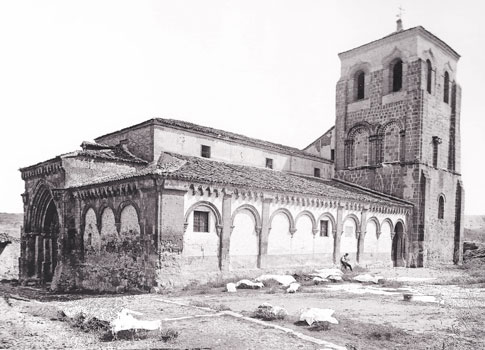 What to see in Segovia

Starting in Plaza del Azoguejo is the Aqueduct, (the first monument to be seen in Segovia). From there we can admire the limestone wall and large granite ashlars. It is the most important Roman civil engineering work in Spain. It was built towards the end of the first century to carry water from the mountains to a camp located under the current Alcazar. It has eighty towers and five gates on its three kilometre perimeter.

In the small cobbled square at the foot of the aqueduct, a typical half-timbered house stands, occupied by the famous Cándido restaurant. Next to the Azoguejo is -since 1862- the Artillery School. It is an old Franciscan convent built in the 15th century; its Gothic cloister is remarkable.

Up the street, past the Casa de los Peces, is the Calle de Muerte y Vida (Life and Death Street), whose name alludes to a legend related to the communal revolt.

Returning to Avenida Fernández Ladreda you will reach the Church of San Clemente, a Romanesque temple with a magnificent apse, gallery and remarkable mural paintings.

A little further away is the Church of San Millán. It is a model of the Romanesque churches of Segovia, since it integrates the Islamic influence (decoration and vaults in the Caliphate style), atriums that serve as a meeting place and a slender bell tower in the Mozarabic style built in the image of the Cathedral of Jaca.

Returning to the aqueduct, on the other side is the Church of San Justo. It contains one of the few sculpted tympanums from the Segovian Romanesque and with some valuable Romanesque mural paintings (13th century), presided over by a Pantocrator. 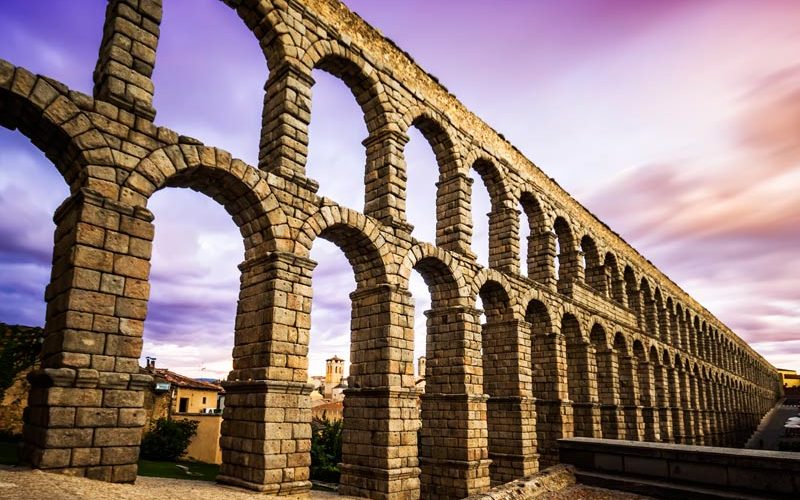 Also interesting is the Church of San Salvador, a Romanesque-Gothic and Baroque work that presides over a beautiful medieval square with the hustle and bustle of the surrounding schools. A remarkable monument to visit in Segovia.

Then we must recover our car to start the route by car. It can begin in the essential Monastery of San Antonio El Real, old summer palace of Henry IV later turned into a convent.

Following the city’s ring road in the direction of the Eresma valley, we will arrive at the Church of San Lorenzo, a Romanesque-Mudejar work with a double porticoed atrium and a brick bell tower. The central apse stands out in the complex, divided externally by four attached columns that form three central spaces and two presbytery spaces.

On Calle del General Zúñiga you can reach the Monastery of Santa Cruz la Real, founded by Santo Domingo de Guzmán in the 13th century and renovated in the 15th century in the Gothic style. Its front page stands out, with Queen Isabella the Catholic in an attitude of prayer together with her husband. The Cave of Santo Domingo, adorned with a doorway, is also preserved.

Near the Mint, across the bridge, is the Monastery of Santa María del Parral. It currently belongs to the cloistered monks of the Order of St. Jerome, and was built around the church and its cloisters in Gothic, Mudejar and Plateresque styles. It is one of the 15th century masterpieces in Segovia.

The next stop is the Romanesque Church of San Marcos. In front of it, you can reach the unique Church of the Vera Cruz, founded by the Knights of the Order of the Holy Sepulchre of Jerusalem in 1208, although popular tradition attributes it to the Templars.

In the nearby Fuencisla avenue is the Convent of the Carmelitas Descalzas, founded by San Juan de la Cruz in the 16th century, whose tomb is located inside. A stone staircase leads to the convent and the temple, with a single nave and side chapels.

The Sanctuary of Nuestra Señora de la Fuencisla, patron saint of the city, was built between 1598 and 1613. The main altarpiece and the remarkable baroque grille that closes the presbytery stand out, donated by the rich guild of cloth makers of the city.

The visit to Segovia within the walls is done on foot: from Plaza del Azoguejo to the Alcazar and back.

From the Plaza del Azoguejo is the Aqueduct we can go up Cervantes Street or Real Street. We leave behind the Mirador de la Canaleja and the Casa de los Picos (15th century Gothic-Renaissance decorated with “diamond tips” in granite).

We go on to the Palacio del Conde Alpuente, a Mudejar construction from the 15th century. Returning towards Juan Bravo and in the direction of the cathedral we will find the square of Medina del Campo. It contains the House of Juan Bravo and the Tower of Lozoya. Also the Church of San Martín, Romanesque with Mozarabic and Mudejar elements in arches and capitals.

If we return to the square and resume the journey we reach the old Jewish quarter, where stands the Convent and Church of Corpus Christi. It was a synagogue from the 13th century.

Through Isabella the Catholic we will arrive at the Plaza Mayor. In its arcades are concentrated a large number of bars and restaurants to see in Segovia and above all enjoy them. There you will find the Town Hall (17th century), the Juan Bravo Theatre and the Church of San Miguel (16th century). In its atrium she proclaimed herself Queen of Castile Isabella the Catholic. 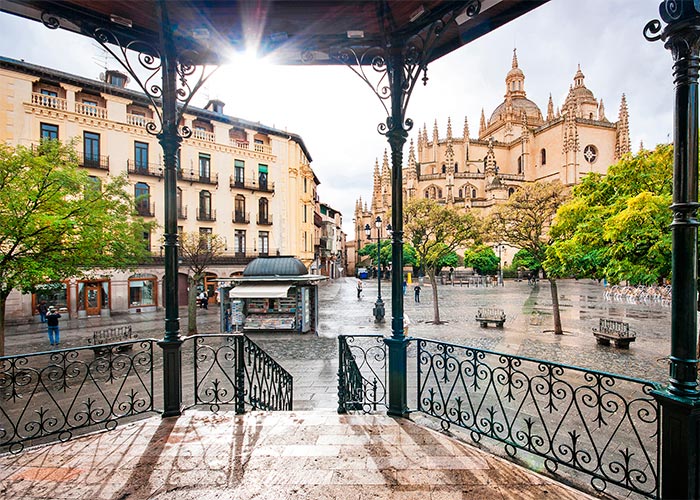 In the square there is also another key monument to see in Segovia: the Cathedral of the Assumption. It is known as “The Lady of the Cathedrals”, built between 1525 and 1768.

At the end we will arrive at the Gardens of Queen Victoria Eugenia, in front of the Alcazar.

The Alcazar of Segovia is another of the infrastructures that we can see in Segovia. It is located on the spur of the rivers Eresma and Clamores. It is a 13th century construction built on earlier works dating back to Roman times.

Nearby is the Church de la Trinidad, a 12th century Romanesque building that houses paintings by Benson and Pontormo. There is also the Tower of Hercules, a Mudejar construction integrated in a Dominican convent and the Palace of the Counts of Mansilla.

From here we can go to another place not often seen in Segovia: the viewpoint and the beautiful gardens of the Zuloagas, with the Church of San Juan de los Caballeros (11th century). The temple is now the Zuloaga Museum. It has ceramic pieces by Daniel Zuloaga and paintings by his nephew Ignacio who worked there.

Castile and León, castles, cathedrals, monasteries, Roman sites, Segovia
It may interest you...