The Santuari de la Mare de Deu de Montserrat, in Tarragona, is a place with a unique essence. A scent beyond the nature that surrounds it or the candles that are lit inside. At a single glance, you can see stories of completed and celebrated harvests. Silences that speak of faith and an architecture created in the image and likeness of the surrounding environment.

The region of Montferri, in the province of Tarragona, shelters this small miracle among mountain curves and vineyards. Twinned with the Sagrada Familia in its Modernist style, the sanctuary was born of the imagination of Josep María Jujol, a disciple of Gaudí. There, from the top of the Corralet hill, one can see the landscape of Alt Camp.

The history of the Santuari de la Mare de Deu de Montserrat is as special as the temple itself. Starting with a construction that reality took on the task of dividing it into two parts, it continues with an aesthetic that links it to the Barcelona monument of Gaudí’s Sagrada Familia. This is achieved through an invisible thread, that of the creativity of Modernisme. 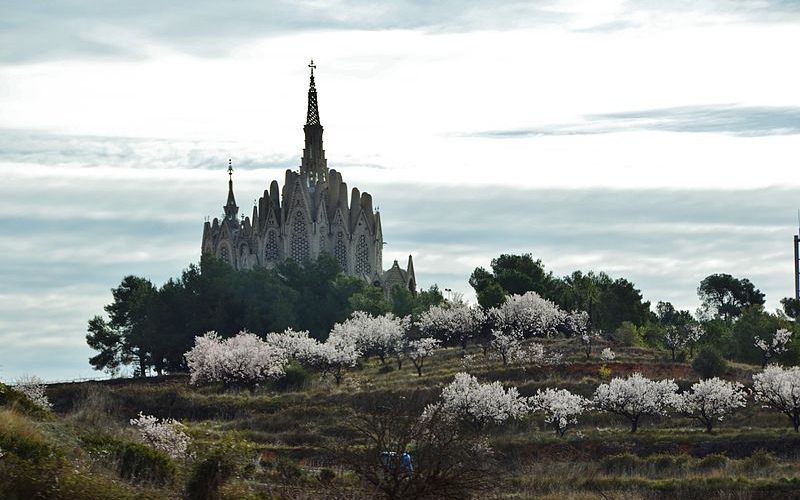 The shrine among the vineyards. | Wikimedia

The project of the construction of the shrine was born out of faith. Already at the beginning of the last century, and perhaps before, the people of the area had the custom of going on pilgrimage to the temple of Montserrat. They made this journey in gratitude for the harvest of their grapes. Inhabitants of a wine-growing land, they prayed to the Virgin for interceding divinely, from heaven, in their earthly existence. It was Daniel Vives Solé, a Jesuit born in the region, who, moved by the faith of his neighbours, set out to bring them closer to the Moreneta that they loved so much.

Supported by his brother Josep Vives Solé, who gave him some land in El Corralet, he encouraged the inhabitants of Montferri to have their own space of faith. Josep María Jujol, the Vives Solé’s cousin-brother, was responsible for making the dream of worshipping the famous black virgin come true in the form of arches and domes. 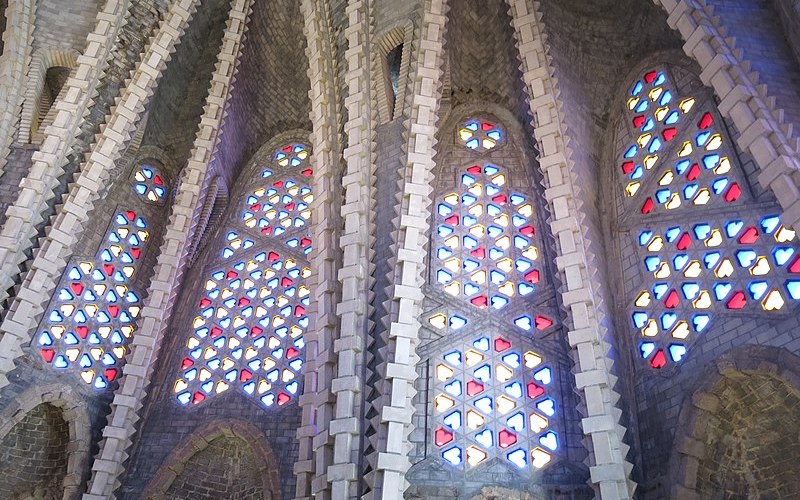 Interior of the shrine. | Wikimedia

In 1925 the elevations of the Montserrat mountain range witnessed the laying of the first stone. The bricks that began its walls form another sign of its particular personality. They were made from a unique formula, based on cement and gravel taken from the bottom of the Gayá River; together with the effort and work of the inhabitants of the region.

Half a century of oblivion

In 1931, in the midst of an unstable political situation and a provisional government in question, the lack of funds meant that the construction of the Santuari de la Mare de Deu was halted. Its walls were victims of the Spanish Civil War and of years of neglect and abandonment. Injured to death, they remained hidden and silent for more than five decades. Already in the 80s of the 20th century that third part, still standing but seriously ill, came to light. After a thorough cleaning, reconstruction began until the final inauguration on May 30, 1990. 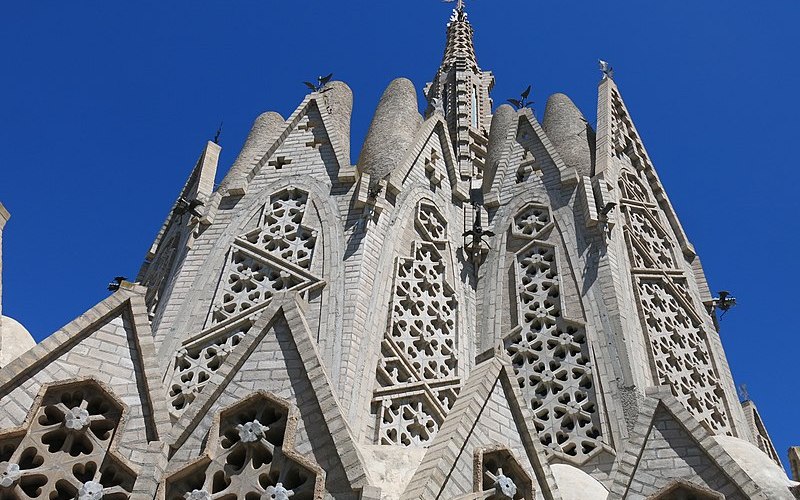 Marian devotion found in Montferri one more stop on the way through the routes woven on the tapestry of the Iberian Peninsula. A pilgrimage that the years and personal experiences have sewn together stitch by stitch and step by step. The history of the Shrine of La Mare de Deu de Montserrat seems to be taken from a journey through time; in which the doors of the past open towards the future and vice versa.

From Jujol to Gaudí, a tribute from disciple to master

It is impossible to talk about the Mare de Deu without referring to its architecture. Chameleon-like, changing according to the prism from which it is viewed, such is the shrine of Montferri. At times, it plays at imitating the shape of a mountain. At other times, it drinks from the influence of the Sagrada Familia and its author, Antonio Gaudí. And at times, it seems to become a ship that directs its bow towards Montserrat. Finally, to appreciate it as a whole is the only way to understand everything that its architecture wants to express. From a message of admiration to recognition of La Moreneta, housed in the Monastery of Santa María de Montserrat. 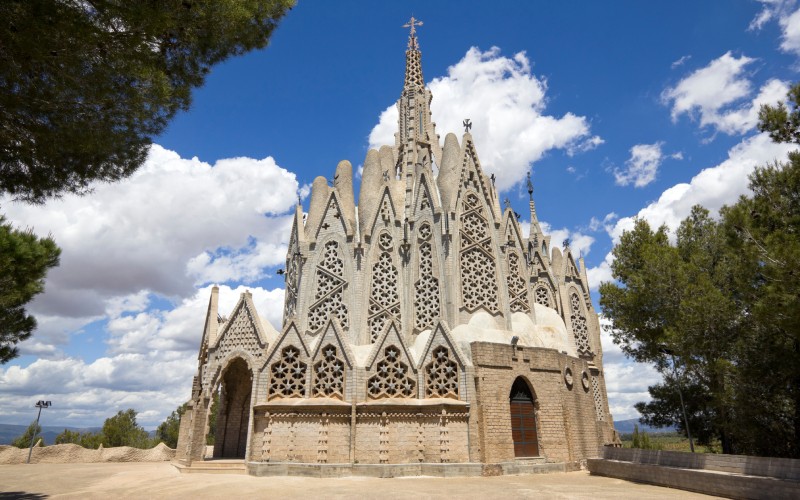 External architecture of the Sanctuari. | Shutterstock

The hermitage stands on the Corralet hill, 400 metres from the municipality of Montferri, in the south of the Alt Camp area. Its structure recreates the silhouette of the Montserrat massif through 33 domes and 42 pillars. The polygonal plan made up of parabolic or catenary arches is one of the characteristic signatures of Gaudí’s work, unrelated to the use of the walls. Hence the comparison of the shrine with the Basilica of La Sagrada Família; which functions as a magic mirror that reduces size and assimilates forms. The design reveals the influence of a guide on the hand of Jujol, a pupil and admirer. 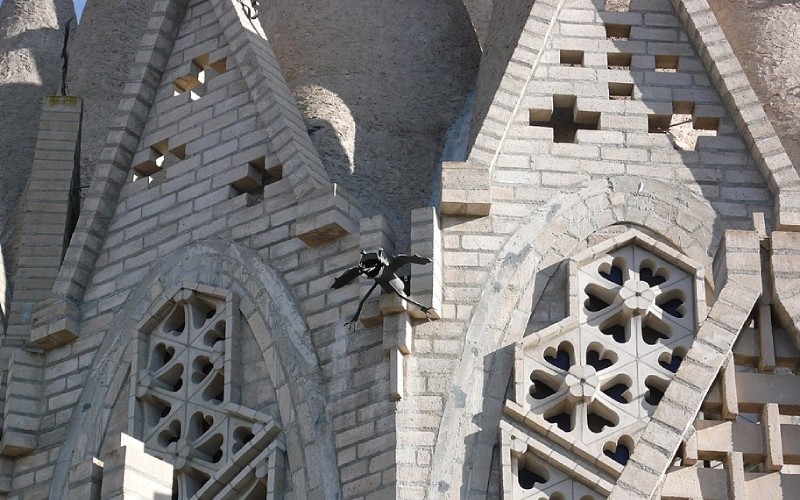 Details of the external facade of the Shrine. | Wikimedia

It is difficult to walk around it and appreciate it; but it is a figure that recreates that of a boat. It is a sign that tells the visitor where the prayers, faith and homage of the Mare de Deu, Montserrat, are directed. Similarly, the dressing room was designed in an assimilated way to that of the abbey; with scales on each side to be able to ascend to kiss the Moreneta.

The work, paralyzed for a long time, was completed under the direction of Joan Bassegoda i Nonell, a historian and architect. With the collaboration of the builder Josep Cendrós, he knew how to put the last notes to a melody of stone and time. Its culmination, at the end of the 20th century, placed one more milestone to visit among the jewels that the region treasures.

A cave, routes and hearts of colour 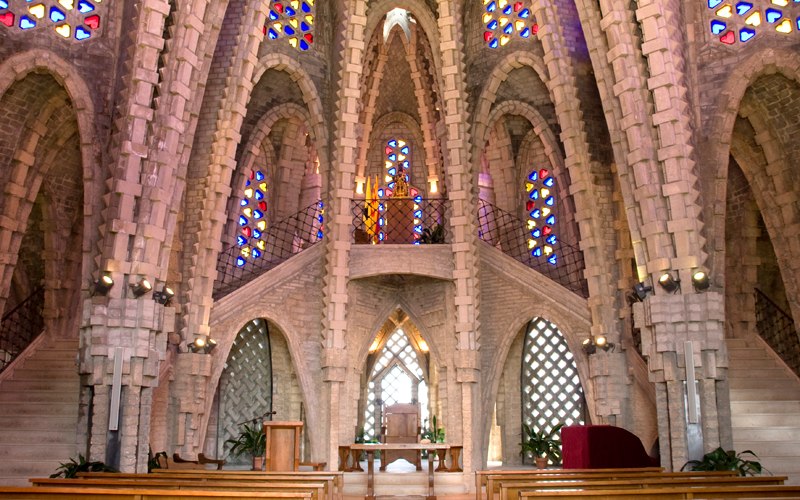 Altar of the Santuari. | Wikimedia

The journey to the Sanctuary of the Mare de Deu is surprising not only for its evident beauty; but also for its latent beauty, hidden in small details. On routes that surround a nature designed to seduce the visitor and a cave that keeps the Virgin in the bowels of the mountain.

Inside the hermitage you can see hearts in the windows. Small shapes that can be counted, guessed at and walked around with the eye, changing from one colour to another, from one vision to another. The fantasy of a fable that colours the landscape at the whim of those who contemplate it. The slabs were designed following an original idea of Jujol. Outside, ivy and honeysuckle decorate the natural architecture of the area. From the same door you can start different routes through the fields of Alt Camp. 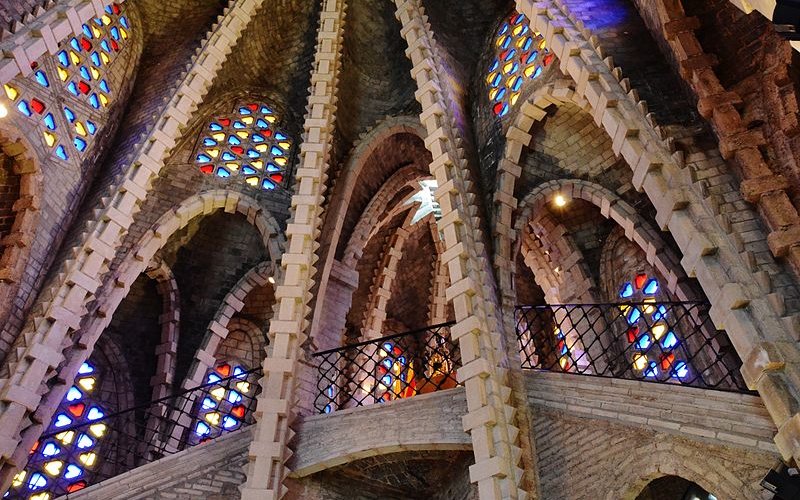 Inside the Santuari de Monserrat. | Wikimedia

Thrushes and wood pigeons guide the walks in the forest. From there you can see mountains of whimsical figures scraping the sky, with their rough peaks, cut by a mountain range of erosion and centuries. And there, inside those same mountains, the Virgin attends the spectacle, hidden and silent. On the same hill that houses the hermitage there is a hidden cave, which serves as a natural sanctuary. Its interior recollection contrasts with the Modernist appearance of the exterior, an unforgettable paradox.

The day ends with a last look. Sometimes as the first step towards a new beginning, the Cistercian route. Houses, cellars, hermitages, monasteries or castles can be the next stop on a path that allows for changes in paths and stops. Others, like the promise of an unforgettable memory.