La Garrotxa Volcanic Zone Natural Park is a curious environment that overlooks part of the province of Girona. Divided into eleven different municipalities, the space allows you to contemplate and tour dozens of volcanoes that were the result of eruptions that began 700,000 years ago and ended just 8,000 years ago. Among them there are spectacular cones, which during the passing of the ages ended up covered by a green layer. Thus, covered, one of the most spectacular and perfect appears, that of Santa Margarida. But it is not only its silhouette that stands out. In the middle of its wide crater is the hermitage whose devotion gives it its name. A really striking sight. 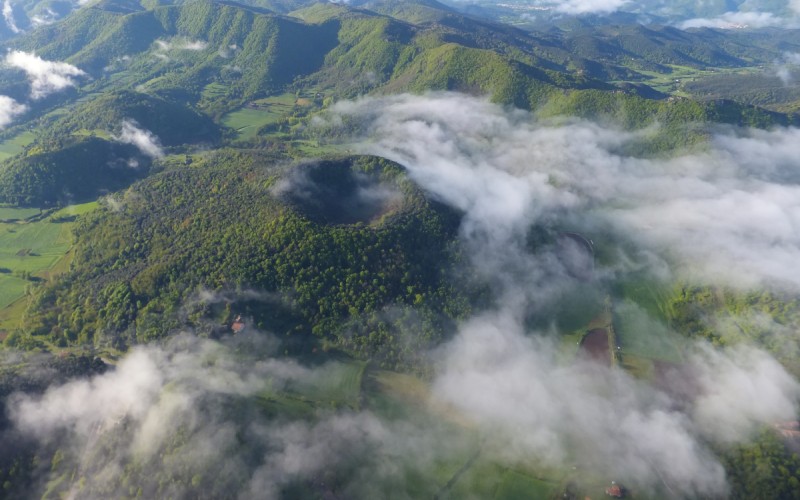 The result of geological anger

Long before tradition placed the discovery of Santa Margarida de Sacot in its crater and the hermitage for which it is known, the volcano as well as its surroundings were less welcoming. It was approximately 11,000 years ago when the last great explosion occurred there. It was a phreatomagmatic type eruption, very energetic, which culminated a previous strombolian stage, of more intermittent activity. A violent last event that led to a later calm. The result, a spectacular cone that mixes eruptive material and previous layers, whose center shows an extensive crater.

A typical story of La Garrotxa, a region used to these conical mountains. In the case of the Santa Margarida volcano, its height reaches 766 metres at the highest point. In the crater where the hermitage is located, however, it remains at 682. On its slopes there is dense vegetation that largely covers the rocky elements resulting from the eruptions. For example, they generated a lava flow, a layer of solidified lava, which falls in the southeast. It is also possible to observe pyroclasts, volcanic rocks accumulated after the explosions. The Mas el Cros path, an alternative to the one that goes up to the interior of the mouth, allows us to contemplate them. 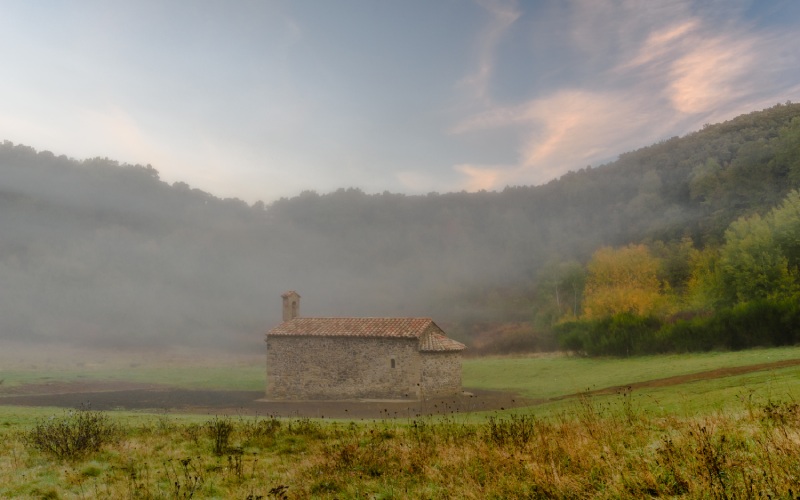 The hermitage inside the volcano

However, beyond the beauty of the geological complex, what is most striking about the Santa Margarida volcano is that it has a hermitage in the middle of the crater. It is a very interesting building in itself but it gains in importance thanks to its particular position. A meadow extends across this central plain, surrounded by forest. What you see today is a temple of simple construction, the result of reconstructions carried out in the mid-nineteenth century. It was in 1865 that the small building, which still reminds us of the original Romanesque one, was renovated. 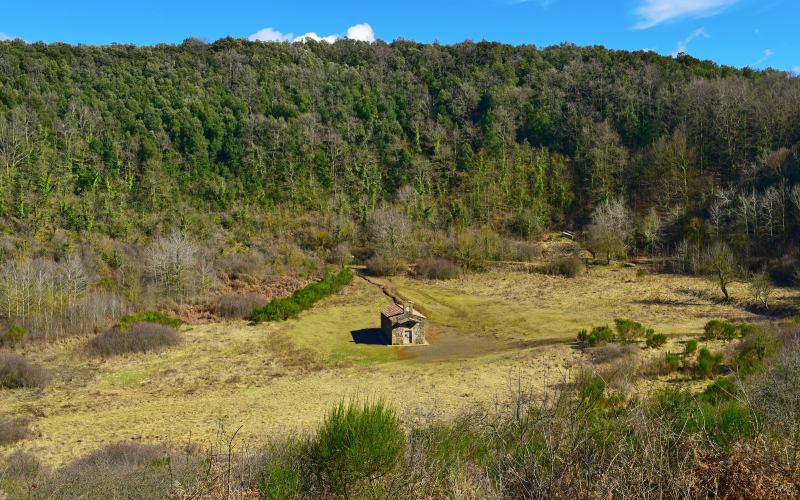 It is believed that the first hermitage of Santa Margarida de Sacot was built in the 12th century. The aforementioned style was very common in the area and the rest of Catalonia, where it spread a little more in time than in the rest of the peninsula. Its origin is associated with the finding of a carving of the saint that gives its name to the surroundings. It is a case similar to that of Marian enclaves originated as a result of a sculpture being found. Be that as it may, the Marian event motivated a great local devotion. A tradition that until relatively recently led to a pilgrimage or aplec in honor of the figure.

However, it was the same activity that gave rise to the temple container that ended up with the first one. During the earthquakes that hit the land in the 15th century, the hermitage was destroyed. The Romanesque apse and porch were saved. In accordance with the subsequent nineteenth-century rebuilding, the medieval simplicity was also maintained. This is demonstrated by its rectangular floor plan with a single nave. Inside you can see a replica of the 14th or 15th century carving. The authentic one is in the Dioscesano Museum of Girona. 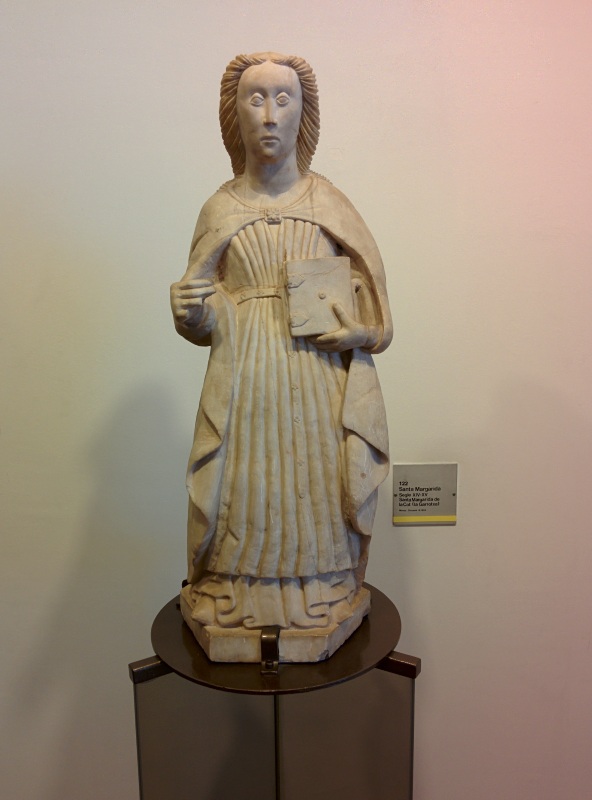 Santa Margarida Volcano, a trip with many possibilities

The good connection of the cone with Santa Pau, the municipality to which it belongs, and Olot makes it one of the most popular routes in all of La Garrotxa. A car park allows you to leave your car very close to the volcano and to follow various routes, which are conveniently signposted. If you are fond of geology, an attractive option is to go on the path to Mas el Cros to wander around the eastern part of the mountain and observe rocks and volcanic strata. 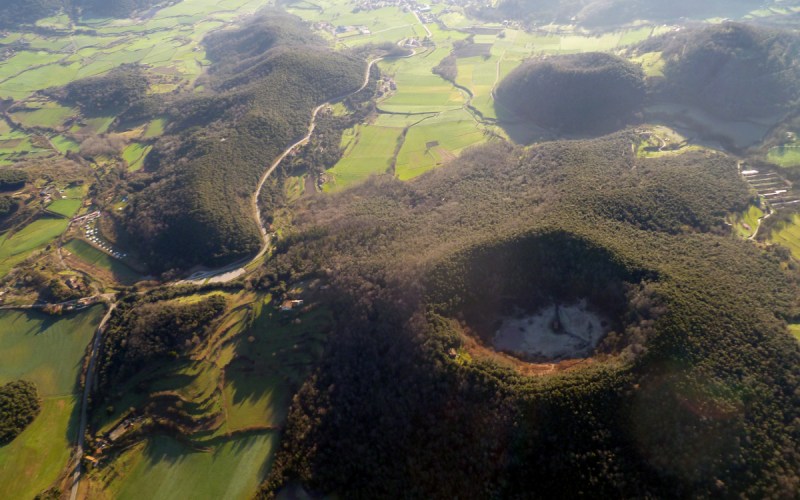 Aerial view of the Santa Margarida volcano and its hermitage. | Turisme Garrotxa

The most common alternative, however, is to climb up to the crater in order to see the Santa Margarida hermitage. In this case, it is enough to take the path of ascent that in half an hour reaches the temple. This ascent, which is accessible to anyone if you are patient, runs through a blanket of holm oak and deciduous trees. Thanks to this, in autumn the mixture of colours of the leaves provides particularly beautiful views.

If you want to spend the day on the route, the best alternative is to take the Itinerary 1 of La Garrotxa Natural Park. This is the one you follow to climb to the crater. However, if you follow it, you can make a circular route of 12 kilometres that covers two other exceptional areas. Continuing in a clockwise direction you will end up at La Fageda d’en Jordà, a really extraordinary beech forest due to its low height and having grown on the plain. As it was on a volcanic flow, it was able to prosper. Further on, another of the most famous volcanoes in the region, Croscat, is surrounded by it. It is the largest on the Iberian Peninsula. Its use to extract stones generated an impressive rift known as the Gredales. A small detour allows you to visit them. 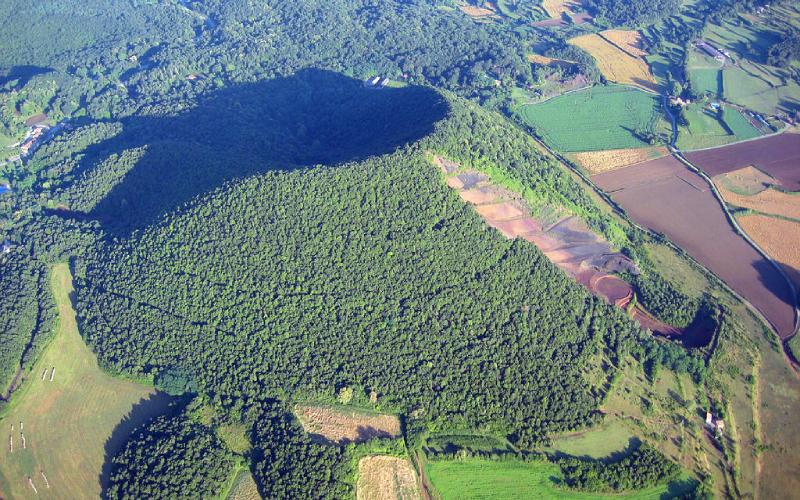 Croscat Volcano and its Gredales. | Wikimedia

In terms of locations, Santa Pau is the closest and serves as a great base for exploring the park. Its stately past is still reflected in its streets and monuments. Olot is an alternative that is also very close to the city. Larger, it is the capital of La Garrotxa. A highly recommended village in the area, whose location high up and between two chasms justifies a visit, is Castellfollit de la Roca. Its stone buildings define the old town, of medieval style, where vertigo is the predominant sensation.

Catalonia, Girona, national park, natural environment
It may interest you...