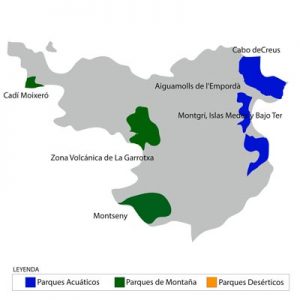 La Garrotxa Volcanic Zone covers a total of 15,309 hectares of land that make up the best preserved volcanic landscape in Spain and one of the most important in Europe. It was recognized in 1982.

La Garrotxa Volcanic Zone Natural Park extends around the Olot plain and protects a total of 40 volcanic cones and a score of basaltic lava flows settled on an attractive pre-Pyrenean landscape in which forests, crops, pastures and small human settlements alternate. In La Garrotxa Volcanic Zone, the contrast between the green and ochre tones of its forests and the black and reddish colours of its volcanic lands stands out, among which there are some points of special geological value such as the cones of Croscat, Santa Margarita, Montscopa and Sant Marc or the lava flows of Sant Joan de les Fonts or Castellfollit de la Roca. One of its most emblematic places is the Fageda d’en Jordà, a famous beech forest immortalised by the poet Joan Maragall, which stands on one of the best Iberian examples of lava casts on blocks.

Vegetation and fauna in La Garrotxa

The predominant vegetation in the area of the volcanoes of La Garrotxa are masses of holm oak, beech and oak. On its terrain there are several forests of special interest such as the oak forests of La Moixina and Tosca or the beech forests of La Salut and La Fageda d’en Jordà. In addition, it is very common in La Garrotxa Volcanic Zone the proliferation of cultivation on terraces, especially of fodder and cereal. The Parc de la Garrotxa has an interesting fauna diversity. Within the park of the volcanoes of La Garrotxa appear communities of wild boar, roe deer, fox or wild cat, in the case of mammals, and goshawk, kite, owl or short-toed eagle in the case of birds. In addition, a large number of amphibians and reptiles are found in the Parc de la Garrotxa.

Garrotxa Volcanic Zone Natural Park The Garrotxa Volcanoes Park has nearly 30 signposted itineraries that lead visitors through its main places of interest. It has infrastructures that have been conditioned as recreational and rest areas or several paid parking areas..

The city of Olot is the main point of access to the La Garrotxa Volcanic Zone. It can be reached via the N-260 and A-26 roads and once there it is convenient to take the GI-524, which goes into the protected area.

Catalonia, natural environment, natural park
It may interest you...