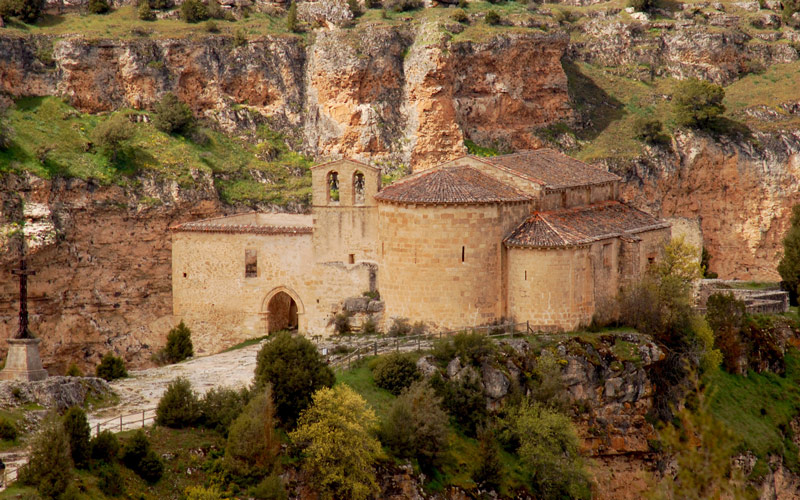 However, what makes this hermitage special is its exact location. It is on the edge of a cliff, in the very heart of the Hoces del río Duratón park. The views of the canyon formed by the Duratón River are truly fascinating. The reservoir created by the Burgomillodo dam, a short distance away, helps to complete the picture. Thus, from the hermitage you can enjoy one of the best views in the whole park.

A journey through the complex

Of the remains still standing of the monastic complex, the hermitage of San Frutos stands out, a Romanesque construction dating from the 12th century and erected on top of another Visigothic temple from the 7th century. The foundation of the hermitage of San Frutos is attributed to the figure of San Frutos and his two brothers, San Valentín and Santa Engracia. The three of them chose the Gorges of the River Duratón to devote themselves to a life of contemplation. Later, the complex was completed with a cemetery and a monastery. 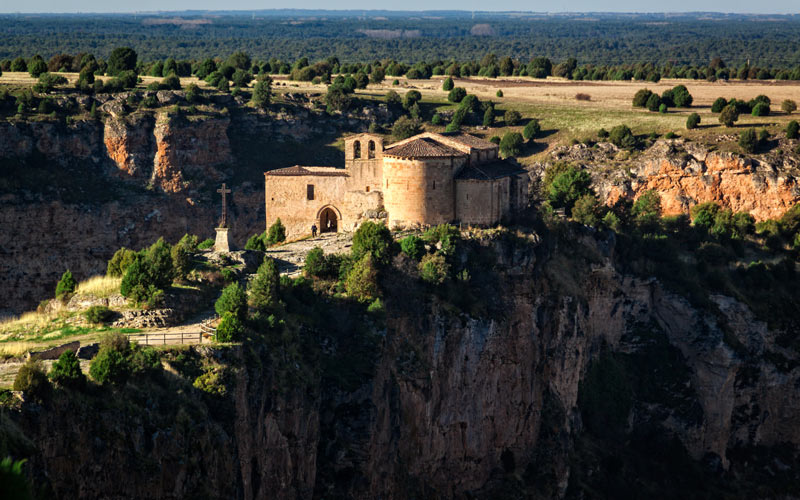 The hermitage of San Frutos on the edge of a cliff

Access to the religious complex is via a curious stone bridge built in 1757, over the crack known as La Cuchillada. In the middle of the crevice and the hermitage of San Frutos are the remains of a Benedictine monastery. Nearby is the hermitage, with the characteristic early medieval tombs at the foot of its apse. The cemetery is located between the edge of the cliff and the religious complex. Next to it are the tombs which, according to tradition, belong to San Frutos and his two brothers, although they are currently empty. 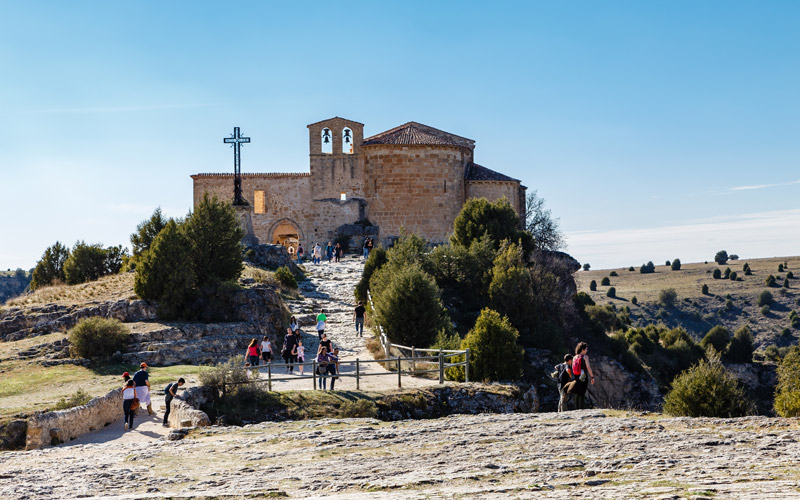 Welcoming visitors to the complex is an iron cross on a stone pedestal with seven engraved keys representing the seven gates of Sepúlveda. The origin of the cross dates back to 1900, when it was erected to commemorate the pilgrimage made that year under the patronage of the bishop of Segovia Quesada. Thus, in the area the number seven acquires special notoriety and corresponds to different events such as the seven miracles of San Frutos, the cave of the Seven Altars or the seven gates of Sepúlveda, among others.

Built more than 900 years ago

Construction of the church began in 1093, and it was consecrated in 1100 thanks to the archbishop of Toledo, Bernardo de Sedirac. Built on the remains of Roman buildings, the construction of the hermitage of San Frutos is attributed to a monk.

In terms of its architecture, the hermitage has a single nave with double arches and small columns. Covered with a barrel vault, access to the interior is through two doors. Of these, only the main one, located on the north side, is functional, as the other one is walled up. It is built in ashlar masonry. 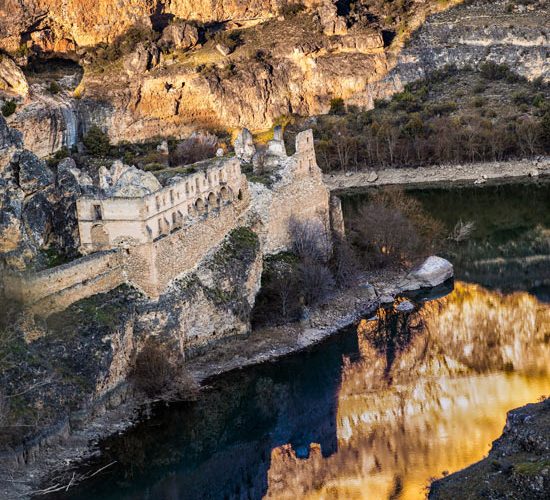 This temple has 14 capitals decorated with mythological scenes and plant ornamentation. The history of the ashlar stone under the altar of the San Frutos hermitage is curious. Known as the “saint’s stone”, tradition has it that if you turn the ashlar three times the hernia is cured, while with fewer turns the pain disappears.

The hermitage of San Frutos has undergone several alterations over the years; such as the one that took place in the 12th century when three apses were added. However, it was not until the 18th century that major works were carried out on the interior. For example, a new altarpiece was made to go on the altar of San Frutos, transporting his relics there. Years later, the new chapel for the saint was added.

History of its era as a monastery 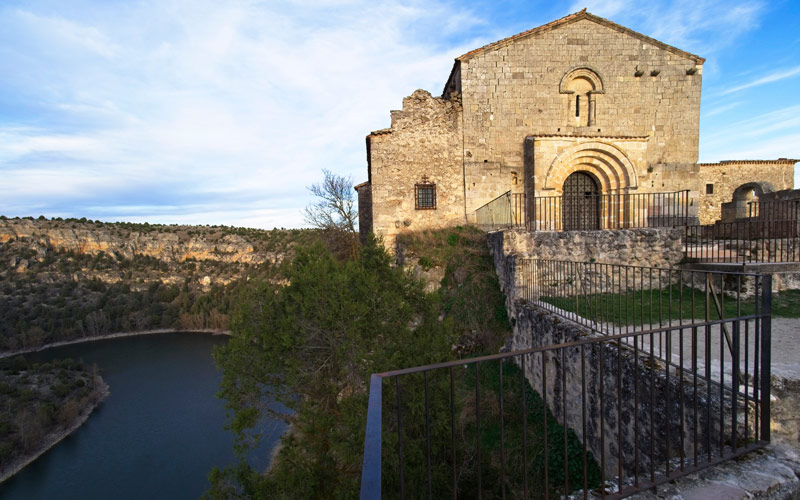 Entrance to the hermitage

In June 1126, King Alfonso VII of León granted the hermitage the charter to populate the monastery of San Frutos, at the same time confirming its annexation to the monastery of Santo Domingo de Silos. In this way, the Benedictine monks remained in the complex located in Hoces del Duratón until they had no choice but to abandon it as a result of Mendizábal’s confiscation in 1834. Thus, the complex was abandoned, to which must be added the fire that occurred in the 19th century. However, in order to preserve it, it was listed as a National Monument in 1931. Decades later, in 1992, the Brotherhood of San Frutos del Duratón was founded, whose mission is to preserve this place. San Frutos is the patron saint of the province of Segovia, to whom a pilgrimage is held on 25 October.

The miracle of “La Cuchillada” 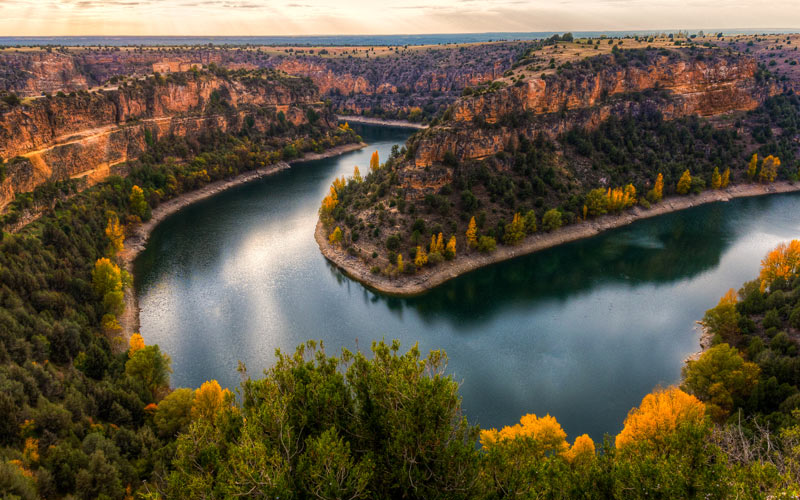 Views from the hermitage of San Frutos

“La Cuchillada” is the name given to the crack that must be crossed over the stone bridge to reach the hermitage of San Frutos. According to legend, the crack was opened by San Frutos himself with his walking stick, stopping the Saracens and saving the inhabitants of Sepúlveda who were crying for help. The crack marked the sacred ground through which the infidels could not pass.

Castile and León, cliffs, hermitages, natural environment, Segovia
It may interest you...