Home to hermits and scenes of multiple chivalrous gestures, this historic villa, situated on a grand fortified rock surrounded by hills and plains eroded by the sun and the winds, is famous for offering some of the best roasts of Castile and for centuries traditions.

Plan your stay in Sepúlveda

The visitor should arrive or leave the village by its south access to park and take a photo from the Mirador de Ignacio Zuloaga, a panoramic view that the artist made famous all over the world. The visit to the museum of fueros and its excellent temples, streets and viewpoints can take half a day; And a full day can be spent strolling silently under the vultures nests of the neighboring Hoces del Río Duratón Natural Park. It is also possible to navigate in canoe or to make other forms of active tourism. Half an hour’s drive to the south are other medieval beauties where you can spend half a day: Pedraza and Turégano.

In the numerous limestone caves located in the vicinity of the Duratón river, around the rock of Sepúlveda, there are important prehistoric vestiges; Then it would be populated by vacceos and arévacos. Between the years 98 and 93 a. The area was occupied by the Roman consul Tito Didio; Nearby would build the city of Confloenta (present town of Duratón).

The Visigoths settled in a place still called Castrogoda. At that time, in the caves located on the walls of the sickles, the future San Frutos and their brothers are established as hermits; The so-called Cave of the Seven Altars is known as “The Visigothic Cathedral”.

It was reconquered towards 742 by the king Alfonso I, who took to the north to its Christian population, generating the call “Duero Desert” (due to the lack of settlers). In 940 Count Fernán González defeats in singular combat to his governor Abu Bad, event reflected in the facade of the call “House of the moro” of Sepúlveda. The caudillo Almanzor was again seized of Sepulveda in 984. Along with Osma, Maderuelo and other strongholds of the area, in 1010 was delivered by the Muslims to the count Sancho Garcia; He granted the Charter of Sepulveda, which was confirmed by King Alfonso VI in 1076 and employed in many other places. It also provided a great wall with seven gates bearing the names of the Fuerza, Guerrilla, Duruelo, Río, Postiguillo, Portillo and Azogue; Of them it is speculated that it can come the name of Sepúlveda.

In the field of Candespina, 26 of October of 1110, the king Alfonso I of Aragon the Battaler – aided by the mesnada of the knight Henry of Burgundy (I count of Portugal) – defeated to the troops of his wife the queen Urraca of Castile , Commanded by Don Gómez González; The paladin and lover of the queen died during the combat. By that victory the Aragoneses took Sepúlveda and Enrique laid the bases for the independence of Portugal. They were his Ladies doña Juana Manuel, wife of Enrique II, and Dona Leonor wife of Carlos the Noble of Navarre. And also his future lordship Isabel the Catholic (being infanta) and his brother Alfonso; The sepulvedanos defended their dominion by the arms when Enrique IV wanted to deliver the town to the marquess of Villena. 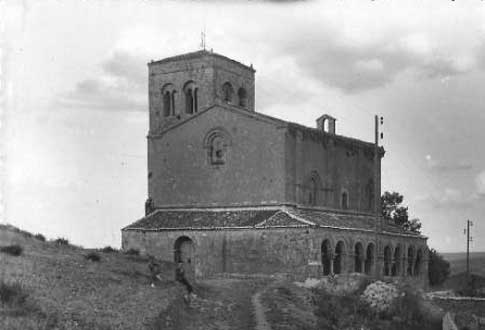 In 1468 there were some tragic events, when Jews were accused of kidnapping an altar boy and crucifying him during Holy Week; This meant death for many of them and expulsion for the rest.

The proximity to one of the main canyons of the Mesta (which met annually near Ayllón made it possible to install looms there that produced the famous segovian cloths, as well as leather tanning tanneries, and could also be the origin of its famous roasts.

In 1808 the sepulvedanos carried out a hard resistance before the French to the control of the general Savary; Forcing him to retire. That’s where the famous guerillas El Empecinado and Cura Merino swarmed. During the First Carlista War this one returned to occupy the town in front of his departure, as did the Carlist generals Gómez and Balmaseda; The latter had a conversation in a garden of the village with the sepulvedana Maria de Salinas, who persuaded him not to sack the town.

What to see in Sepúlveda

We recommend approaching the villa from the south, along the SG-232 road; Half a kilometer we find the Mirador de Zuloaga, whose grandiose views used as background Gregorio Botero in Sepulveda in 1908. From there can be appreciated the austere grandeur of the town clinging to its majestic rock. Then go down to the junction and take the “new road” to the right to cross the tunnel that passes under the village, and return to the street through Alfonso VI street to leave the car in the parking lot.

Climb up Calle Alfonso VI to the beautiful Plaza del Trigo (or “Mayor”), porticada and irregular. To the right, on two turrets of the old castle, is the Building of the Registry (baroque of the XVIII century), crowned by a clock. Leaving the square in the opposite direction, towards the west, you can access a spectacular view of the mouths of the river Caslilla (the opposite to the viewpoint Zuloaga); To the right is the House of the Counts of Sepúlveda (19th century). We continue until arriving at the Church of Santiago, that possesses apse of Mudéjar brick decorated with blind arches and a Romanesque tower of masonry; Nowadays it is the seat of the House of the Park of the sickles of the river Duratón, where one can inform on this spectacular natural space and its griffon vultures.

If we take the street of the Count of Sepúlveda we arrive at Fernán González Street and, at the Bretón Theater, we take to the left the staircase that leads to the top of the hill where is the Church of El Salvador, completed in 1093 Built in pink stone of Sepúlveda, it draws attention its square tower; Its main attraction is its arcaded gallery of eight arches, in groups of two and separated by double columns and capitals decorated with vegetable motifs. From there you can see excellent views in all directions, seeing the “T” shape of the great hill on which stands the village.

We go down the street of the Cofradías, halfway there is the House of the Brotherhoods (18th century, not visitable) in the direction of a park, at the end of which is the Church of the Virgen de la Peña. It is a temple of Romanesque style (XII century) with a great tower; The most important is the tympanum of the cover, on the entrance door, with reliefs of the Pantócrator and the evangelists, surrounded by the figurines of 24 elders. In the interior there is a Baroque altarpiece with the image of the Virgin Patron of the region, as well as an image of Christ of the XIV century. Behind it there is an excellent viewpoint over the gorges of the Duratón river.

Turning in the direction of the town, leaving to the right the so-called Casa de las Conchas and then to the right is the so-called “Casa del Moro” (for the relief on the frontis with the head of which was killed in combat Singular by Fernán González). In front of them is the Romanesque Church of Saints Justo and Pastor; In this national monument is the small but excellent Museum of the Fueros. The building is composed of three naves with three apses, Mudejar roof and triumphal arch with capitals; The beautiful crypt in honor of the Holy Children is preceded by a lobed arch, on the sides of the altar table there are two high-reliefs from the 12th century attached to large slabs with the images of a bishop and a Virgin and Child. 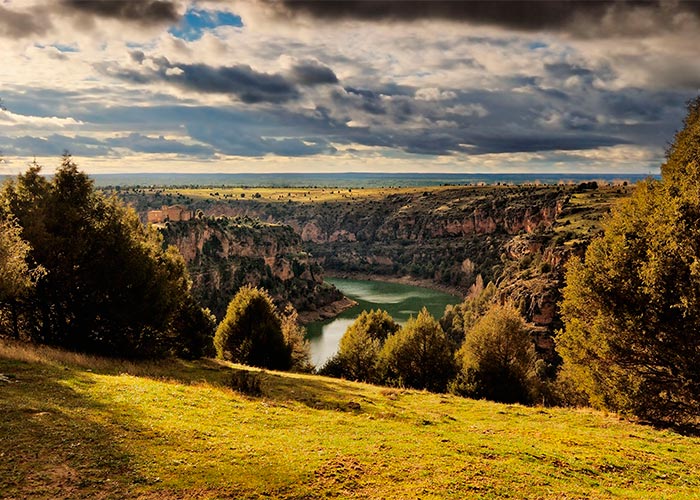 Following the street you arrive to the Arc of the Azogue or “of the Ecce Homo”, by which it is acceded again to the place; At the end of this is the Church of St. Bartholomew, present parish, preceded by a Renaissance staircase and a stone cruiser. Going down to the river Caslilla along Calle Sancho García, we find the interesting Museum of Antique Toy Figures; This one houses the Allende Salazar collection of more than fourteen thousand pieces (manufactured mostly before 1960).

After visiting the village we recommend taking the road from Villar de Sobrepeña to the bridge of Tálcano, there is a rest area from which to take the walk to the Cave of the Seven Altars, named after the altars carved on its walls by San Frutos and His companions in the 8th century (not visitable).

Further on, in Villaseca, there is a dirt road that leads up a cliff over the spectacular sickle of the Duratón river, there is the Ermita de San Frutos. It is a Romanesque temple of the XI century that was a Benedictine priory founded by the saint and his brother martyrs Engracia and Valentín. San Frutos, the patron of Segovia, is credited with the miracle of “La Scuillada,” in which he struck the ground with his staff and caused the earth to open before the arrival of the Muslims. One who has contortionist abilities, or very short stature, can turn a stone under the left side altar of the Gospel, as he is credited with the benefit of healing hernias. In addition, according to tradition, if three rounds around the hermitage takes away the toothache; However, with less than a turn can be achieved, because one would rush to the void, dying in such a beautiful place. Every October 25 there is a popular pilgrimage there; Also come from the city of Segovia many walking pilgrims, organized logistically in stages on two weekends by the newspaper El Adelantado.

The third weekend in July sepulvedanos celebrate in the Feast of the Fueros the privileges that they obtained in the Reconquest.